It’s not the first time an Italian captures our attention, knowing that Italy is a country with a naval tradition like few nations can be and Cantieri di Pisa is one of its most striking representatives. At the end of World War Two, in 1945 to be exact, Gino Bini and Antonio Sostegni decided to make a risky bet, while everyone went to Viareggio or Donoratico, Bini and Sostegni stayed at Limite sull’Arno and began, as owners, to construct every type of vessels, which has taken it to acquire impeccable knowledge and technique, and, even so, with an open mind towards the future, willing to keep on learning and improving.

Akhir is a branch of the shipyard launched in 1972 and which, as the Arab name is carries, is the novelty and the newest. This is how this Akhir 118 called Nena continuing with the Akhir line which chases a contemporary and different design, this is how this spoiled girl saw the light.

But the novelty is double, this is the first new design Akhir 118’, and plus, the helmet of this beautiful yacht is the first in the history of the shipyard with a gray metal color which gives it an iconic touch. 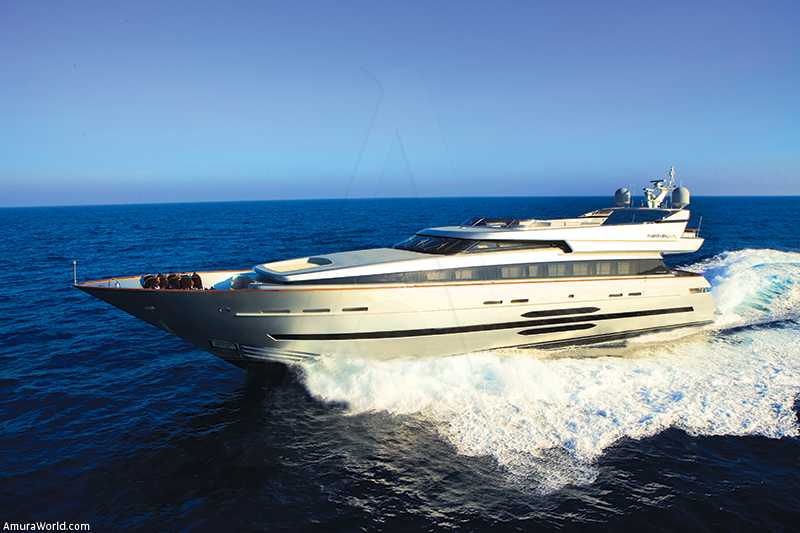 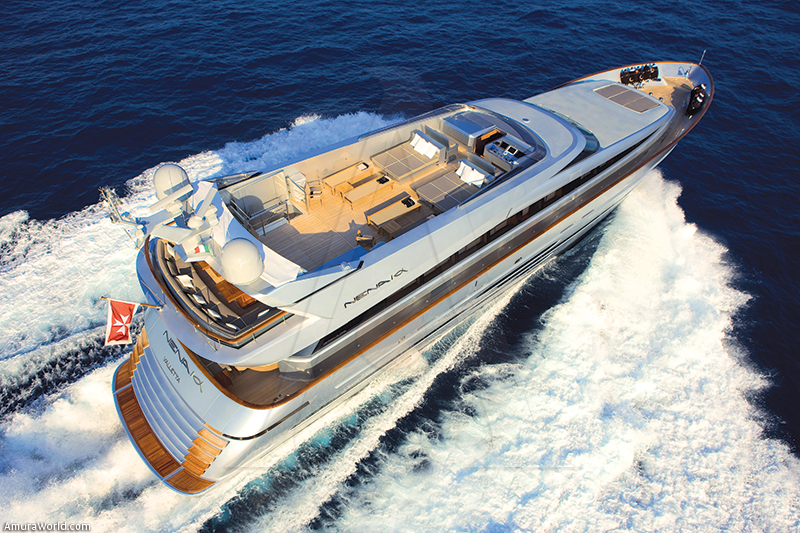 Once inside the yacht we go down up to the inferior deck, where the bow part is meant for the crew, while the rest of the deck is for the guests. The crew has a cabin for the captain, with a double bed and two cabin’s for the crew, each one on one side with bunk beds. It has a shared bathroom for everyone in that area.

The guest’s cabins as well as the owner’s are very spacious and well distributed. Moving from bow to stern we find the VIP cabins, one at port and other at starboard both with their own bathroom, we continue towards the central hallway and at port there’s another cabin with two individual beds and its own bathroom.

Finally we find the main cabin which is very wide; it includes the whole arm available at the center of the ship as well as the equivalent space of the cabin with individual beds.

It has a double bed in the center, with a drawer at port, separated bathrooms for him and her behind the bed, towards the stern, a couch at starboard, a little bit towards the bow we find a private office and on the way we run into the dressing room which can be used as an exercise room with a treadmill. 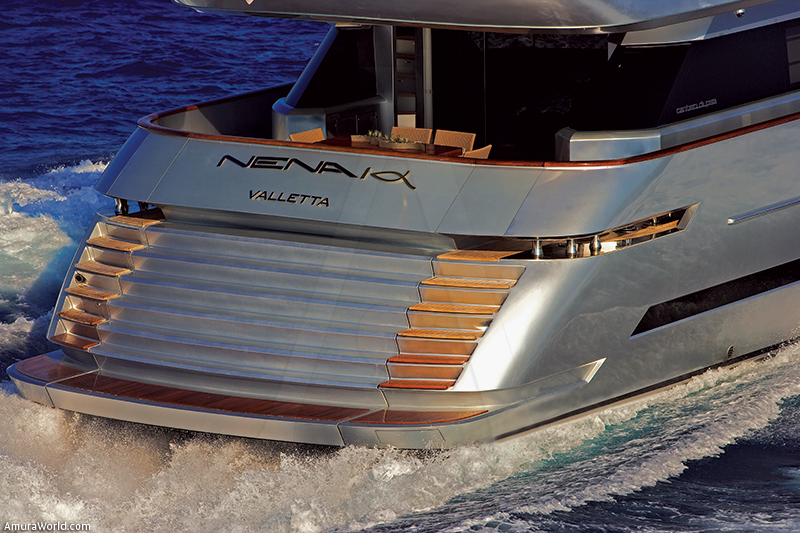 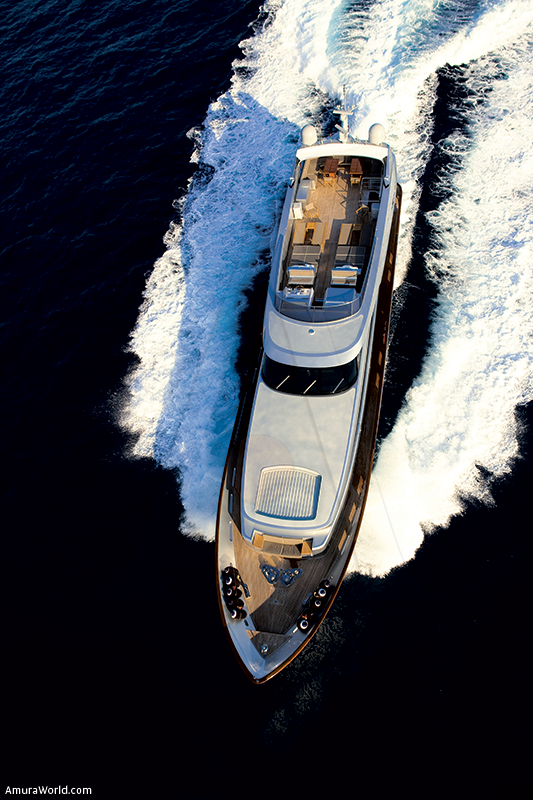 At the end, there’s the machine room, with two MTU engines that together almost dispense 5000 horses of power which are delicately placed to form a group with its surroundings, with all the systems.

The main deck is, is designed so that the guest don´t worry about the service. At the bow there’s the kitchen and a breakfast bar and this area is the one with direct access to the crew section. We continue towards the 10 people dining room.

The next thing is the interior command bridge which is accessed through some stairways that slowly go up. Towards the stern there’s a waiting room with a three people couch and two chairs in front of it, separated by a bar from the main living room which has a couch in the form of an “L” at starboard, a squared table at the center and an individual couch at the stern, at port there’s a couch for three. The exterior part of this deck has a rectangular table for an informal six people outdoor dinner. 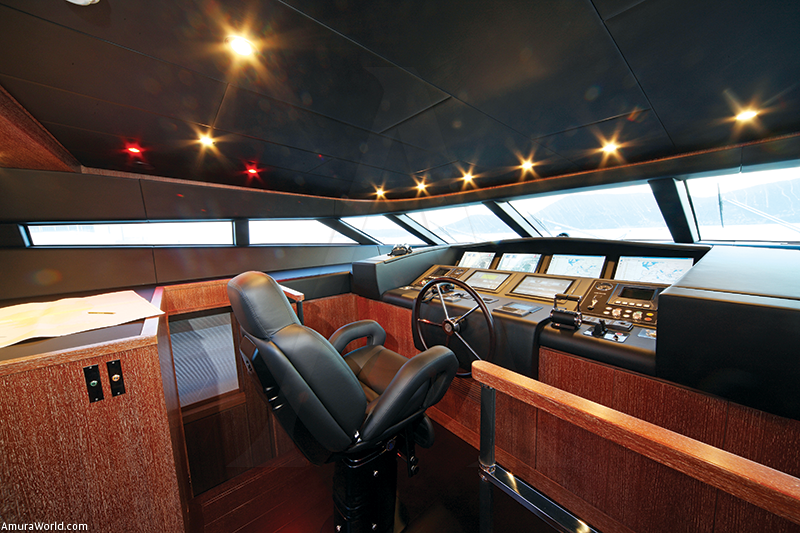 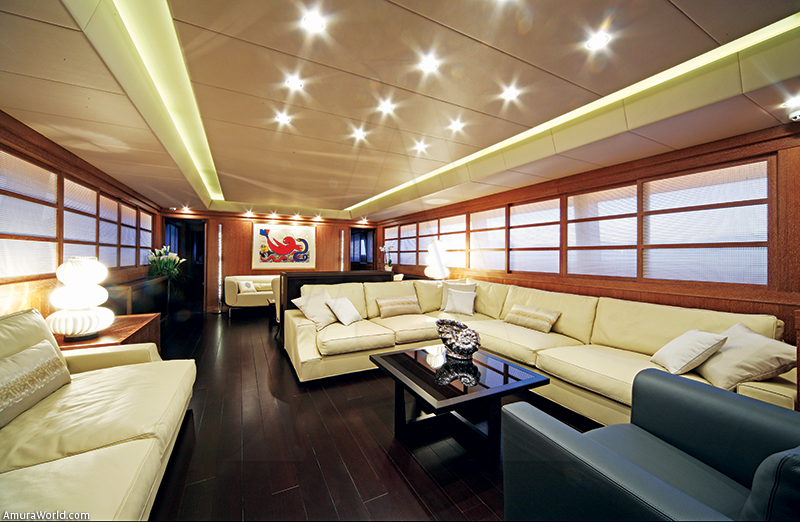 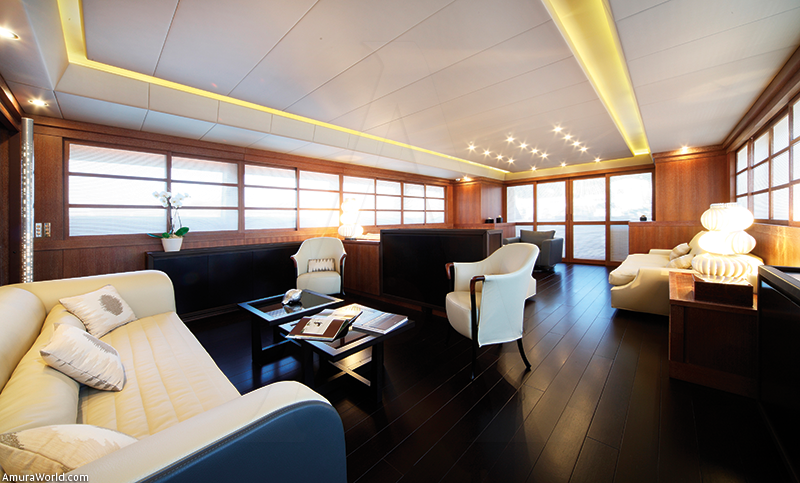 The flybridge is an area designed to enjoy the outdoors and more specifically to enjoy the sun beams, at the stern part there’s a “C” shaped living room that occupies the whole mange and it’s directed towards the bow.

Finally, at the bowest possible to this level, is the exterior command post at starboard and at port an elevated couch to enjoy the pleasure of seeing this ship slide through the ocean. 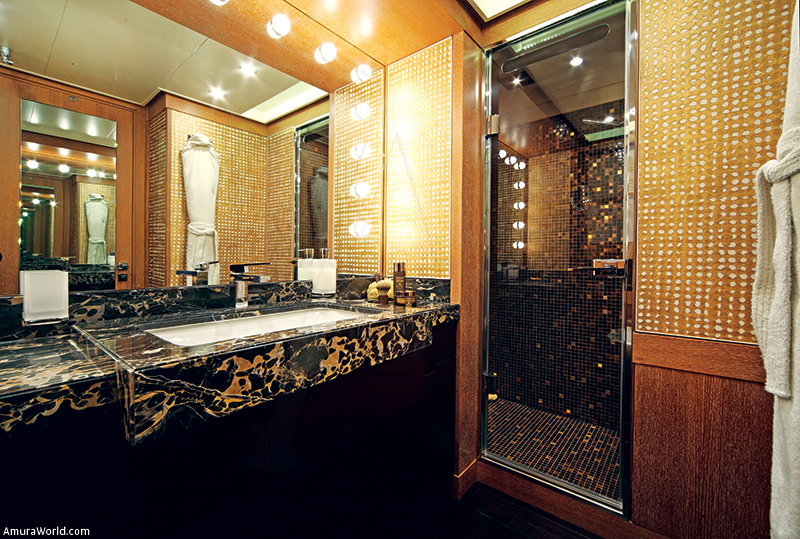 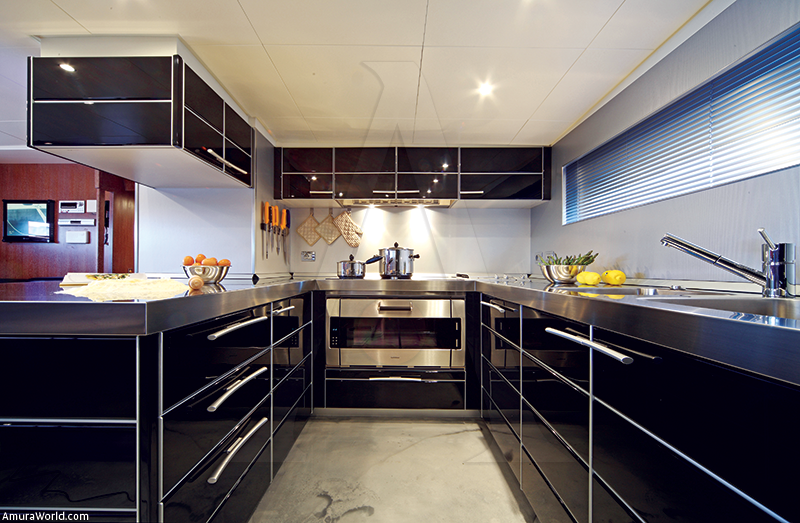 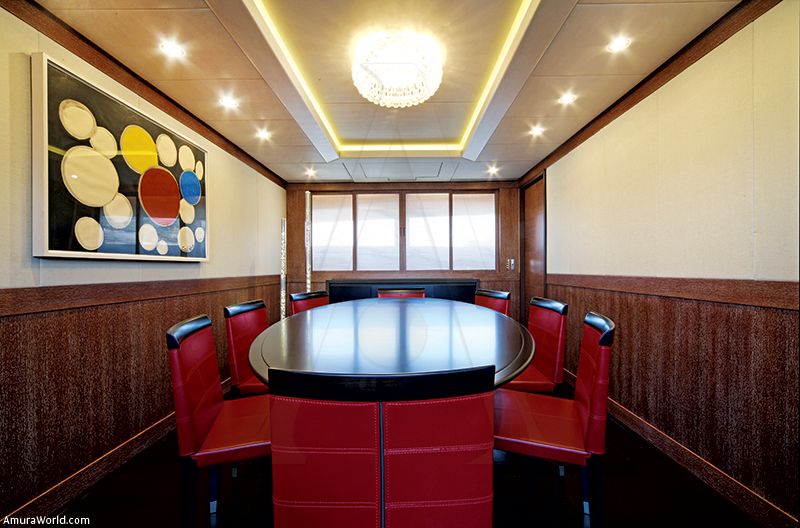 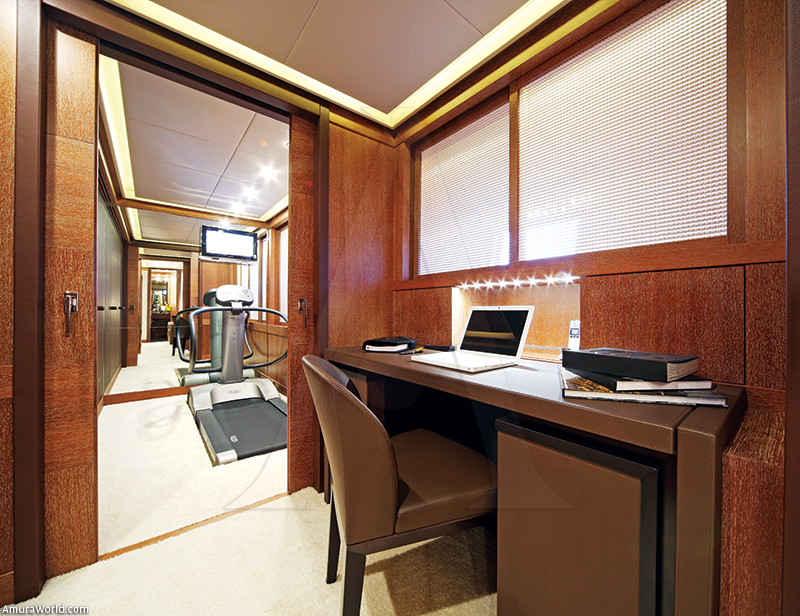 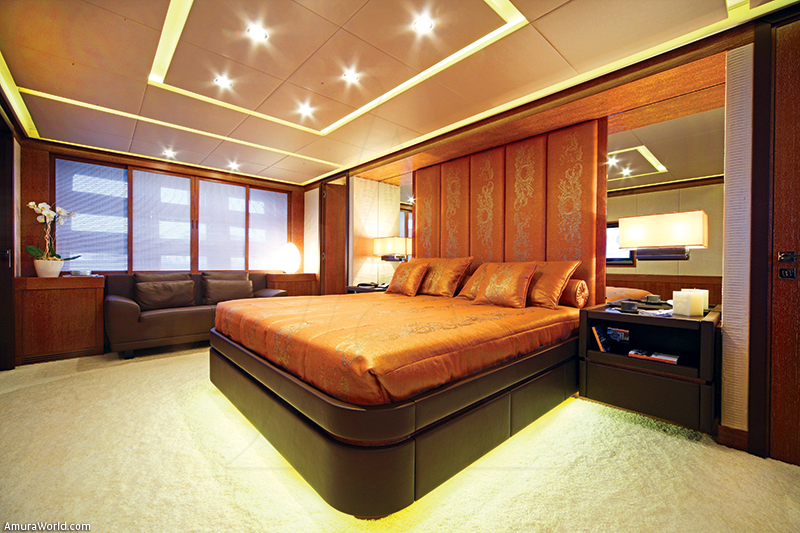 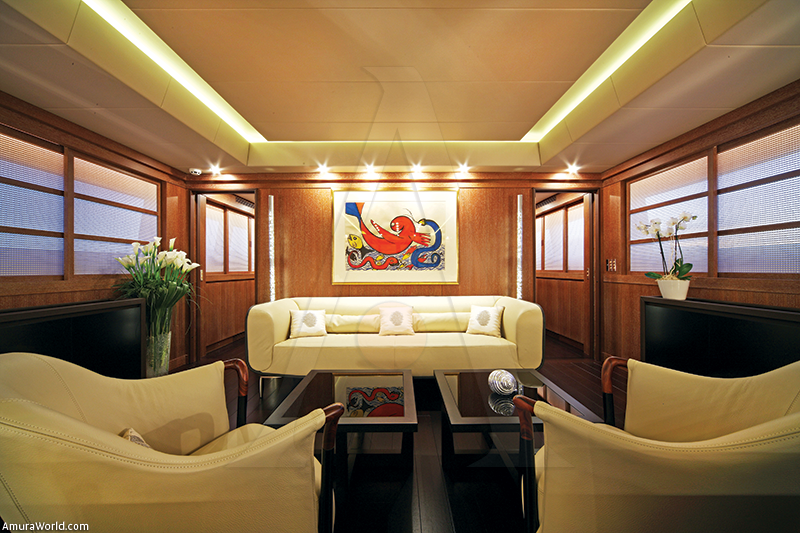