It is October 24 and the best fishermen in the world are already in Cabo San Lucas where 189 teams have registered. However, Hurricane Paul was approaching.

At the call of the captains’ meeting at 6:00 p.m., the organizing committee, the civil protection police and the municipality of Los Cabos, following a long session, announced that first day of the “Bisbee’s” fishing tournament, which was due to be held on the 25th, 26th and 27th, would be canceled, meaning that the more than US$4 million in prizes will be competed for in just two days.

That was how the day ended and Paul was weakening. 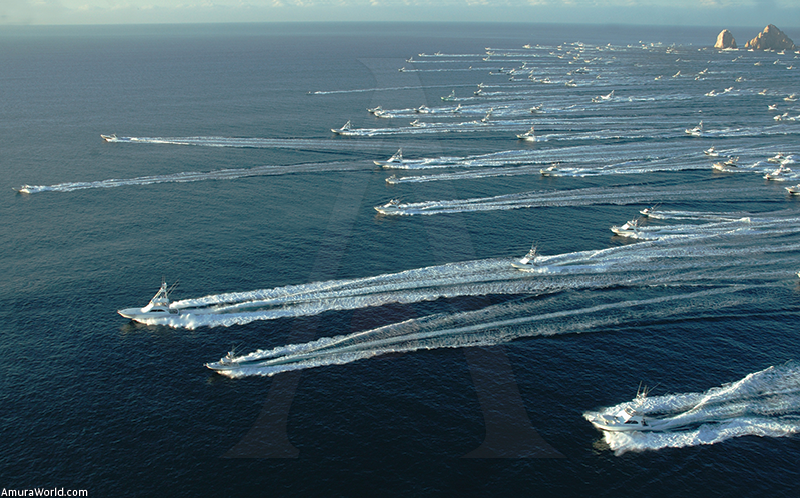 The legendary official whistle on the same channel 16 announced the opening of the port signaling the inauguration of the “Bisbee’s 2006” tournament and with it, the struggle of the purse of more than US$4 million. The starting pistol will be fired at 8:00 a.m

The roar of 2,800 horsepower announced to the entire marina that the Grand Outlaw left deter- mined to beat its 187 adversaries and share the winnings with her smaller sister Fishing Outlaw, which would also take part in the tournament.

Team 189, Amura-Outlaw was in the first line; it was 7:55 a.m. and all the boats eagerly awaited the starting pistol. With their hands poised on their throttles and their radios, all the captains delight- ed listening to the unique Mexican humor with its doble entendres, until... 5,4.3,2,1 And we're off! Full speed ahead and the spectacle and the show of force could be seen to the full.

Over and over again, one could hear the participants asking questions about the rules and other things... until 9:10 am. it could be heard again... radio control go ahead for Grand Outlaw...we have a blue marlin on the line. (The first marlin of the tournament)... Tfell me the name of the team and where it is...

It is the Amura-Outlaw team and the fisher- man is Augusto de Otaduy.

The Amura-Outlaw team experienced moments of glory on announcing over the radio that the marlin has been hauled aboard and would be on the scales in less than an hour. The joy aboard the Grand Outlaw was inexplicable; the members of the team, Mario Ramirez (the Monkey Dog) Gerardo Prieto and his son, Gerardo. Jr.. Juventino Ríos. Luis Picos. Gabriel Garcia, Julio Alvarez and the captain. Augusto de Otaduy. with his children Gus and María José, enjoyed their arrival in port.

Later, the 342 lb marlin was landed, but was beaten by the 361 lb marlin landed by Bad Company to win the bets of the day. 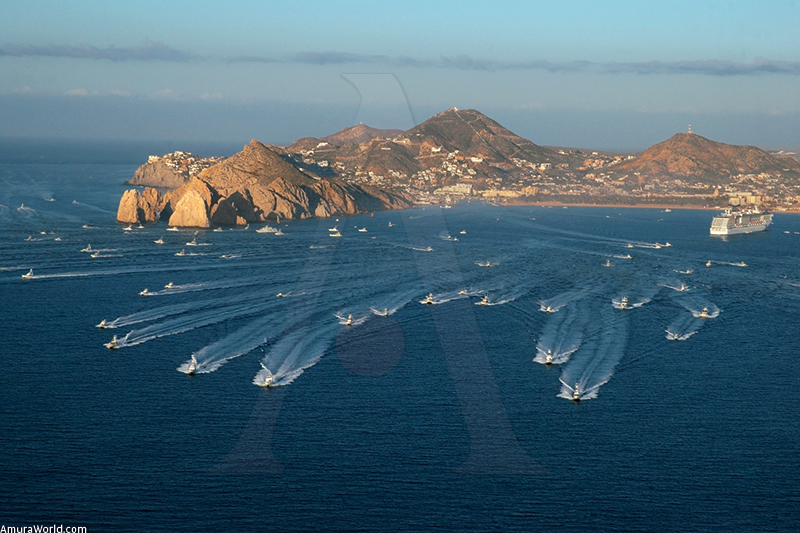 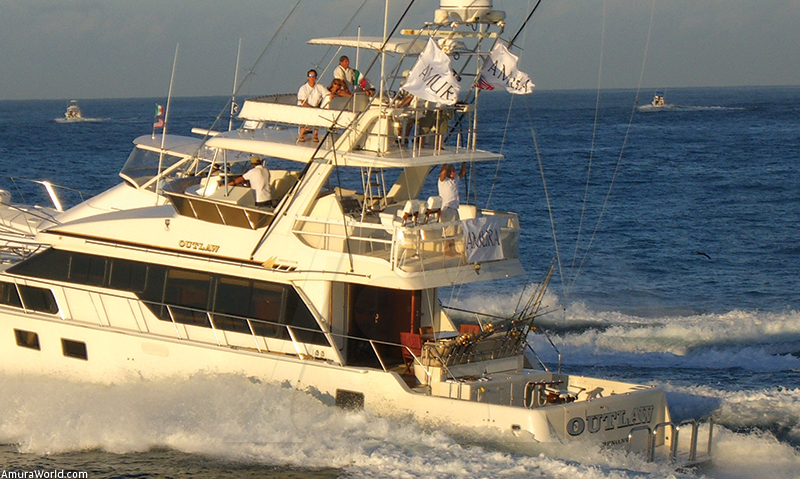 The starting pistol sounded again at 8:00 am. and with it the hopes of winning the tournament on the last day of fishing. It was Bad Company that came in as triumphant with a 420 lb marlin to win the first and second places of all the bets and taking away a check for US$3.902,997.50. setting the record as the largest ever prize ever won in a fishing tournament.

Honor to those who deserve it. Bad Company is the champion of champions in “Bisbee's 2006".

The winners’ checks were awarded at the closing dinner, as well as two very special checks, one for US$359.7 50 to the municipality of Los Cabos and the other for US$249.875 to the State Government, which makes this event the most important for the town, which brought it a great benefit.

On behalf of Augusto de Otaduy and all the par- ticipants. I recognize the businessman and world sport fishing champion. Mr. Oscar Dacarrett for having struggled and achieved that these tourna- ments pay the corresponding taxes.

Thank you Oscar! The tournament misses you.

In the Capella Pedregal category 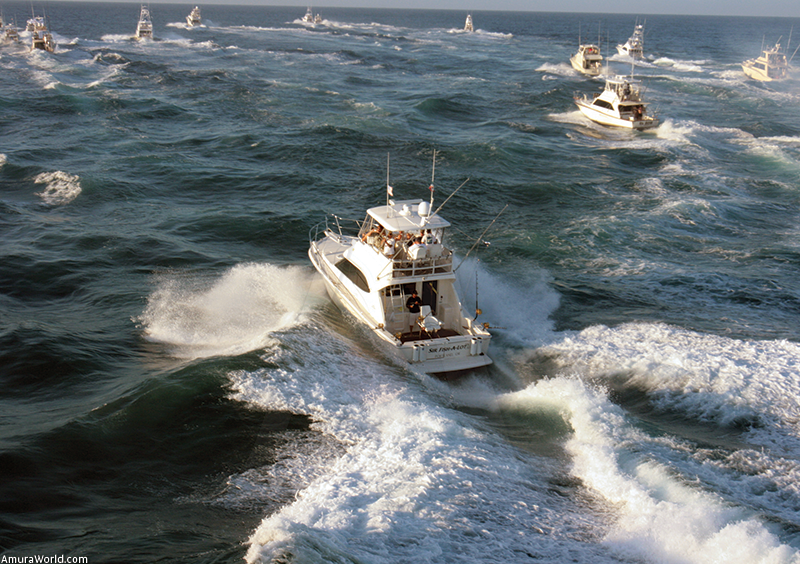 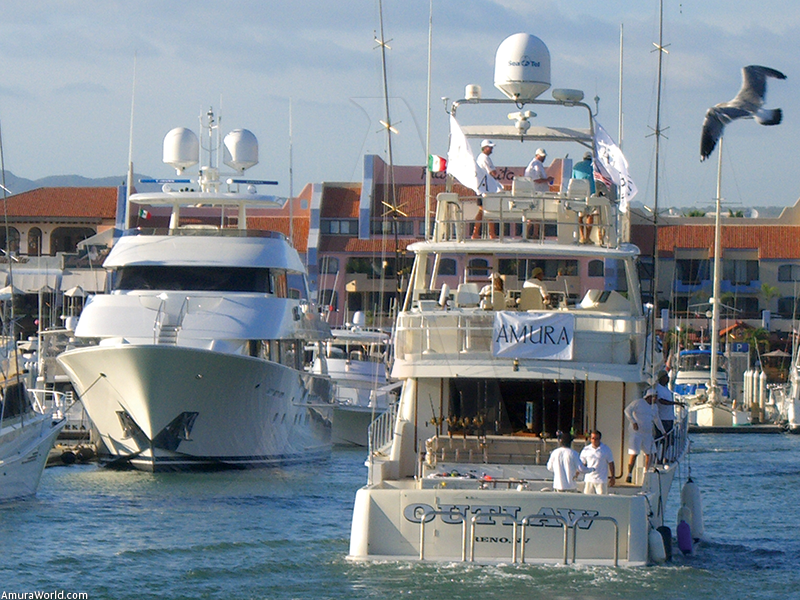