Yacht architecture at its best

This 150-footer, built by CRN, was intended to be a second “home”. But more than being a floating house, she embodies architectural details that let all aboard appreciate their natural surroundings.

After its acquisition by the Ferretti Group in 1999, CRN began concentrating on building semidisplacement yachts with more flowing curves in their steel and aluminum exteriors. CRN teamed up with Nuvolari & Lenard to effect this momentous change. The Magnifica, launched four years ago, was the first to embody this novel design approach. From her swept-back radar arch her soft lines flow down and trace the elegant simplicity of the vessel’s hull. This is especially apparent at the after end of each deck. 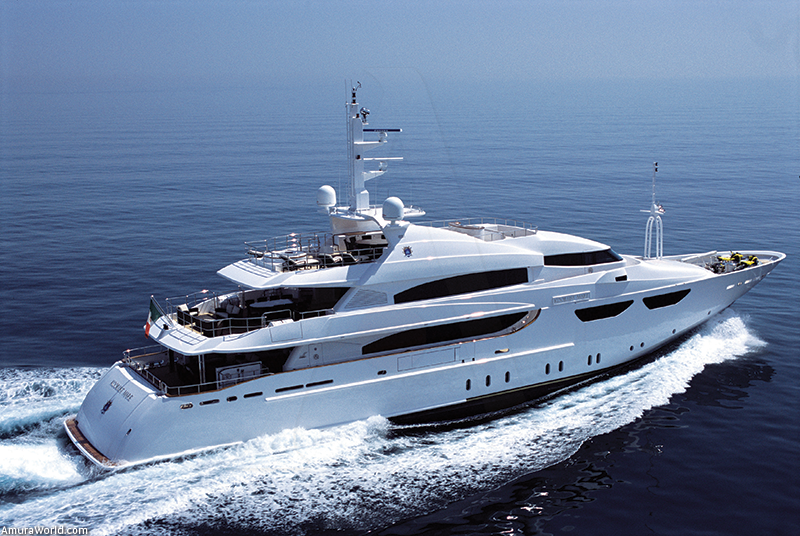 It is also in the aft, the first of two main ways the yacht permits all aboard to enjoy the surroundings. Look closely at her alfresco seating area on the main aft deck, and you’ll notice a distinct slope outboard and down toward the transom. This creates what CRN terms a “terrace on the sea,” yielding better visibility for guests relaxing on the variety of settees here; the same holds true in the alfresco seating and as we enjoy informal meals in the dining areas on the upper deck and, not to mention the impressive sights as we catch some rays stretched out on the chaise lounges on the flydeck.

But guests need not be outside to enjoy the view. The saloon, formal dining room, and sky lounge are especially flooded with sun light during the day. In addition, the yacht has large, vertical elliptical windows below decks, which allows plenty of visibility in each of the four luxurious guest staterooms (a VIP suite, two twin-berth staterooms, and one double cabin). This is a welcome change from the traditional horizontal ports found on many yachts. The soft curved lines seem to carry us gently from one interior to the next. 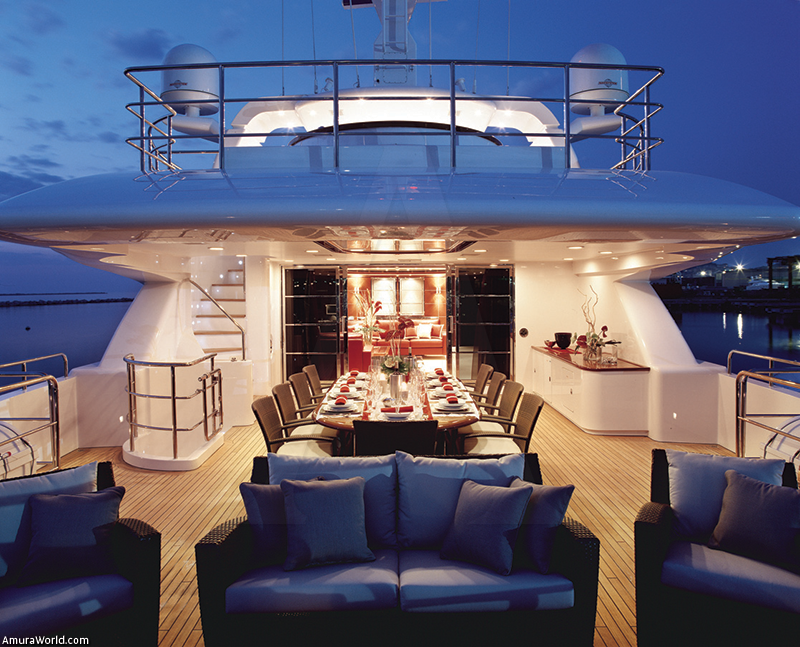 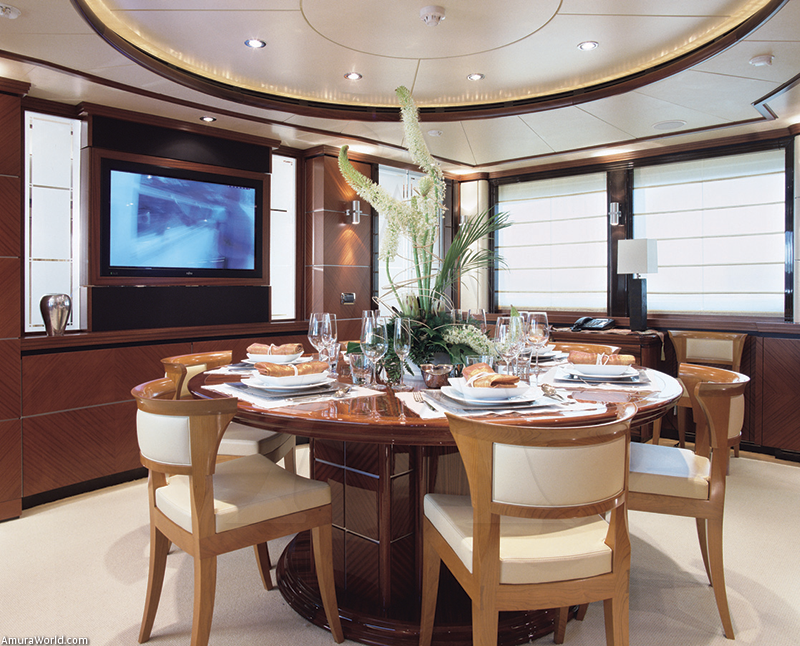 Even though some of the materials are dramatic such as the combination of mahogany and rosewood panels, as well as the insertion of metallic strips between the rosewood sections. The fact is, that though these luxurious materials produce magnificently elegant surroundings, the simplicity of the decor is more minimalist in execution. This combination of spectacular lighting and clean use of space gives added freshness to the design.

Also noteworthy is the way that some rooms are intended to echo the sea itself. The two double guest staterooms as well as the twin stateroom all feature shades of blue, as does the large leather settee in the sitting area contained within the owner’s suite. 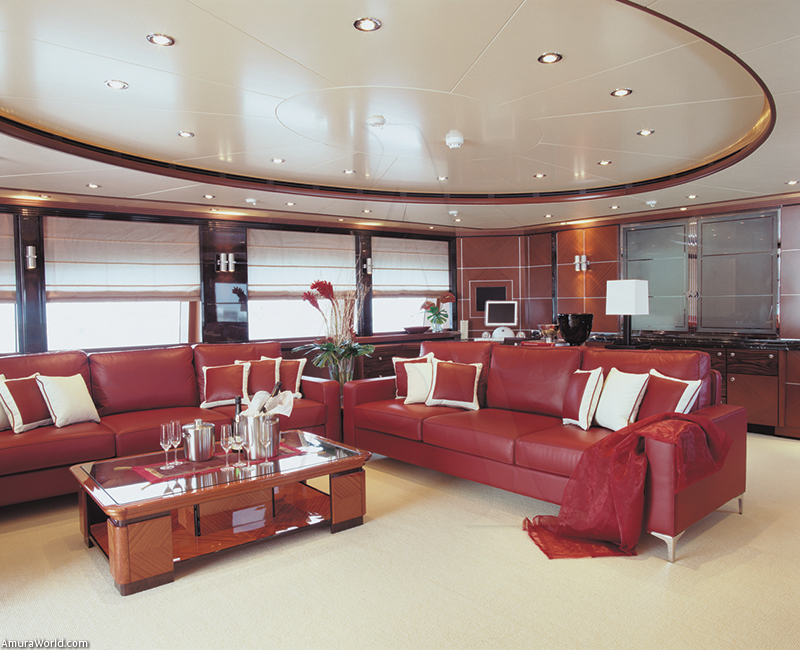 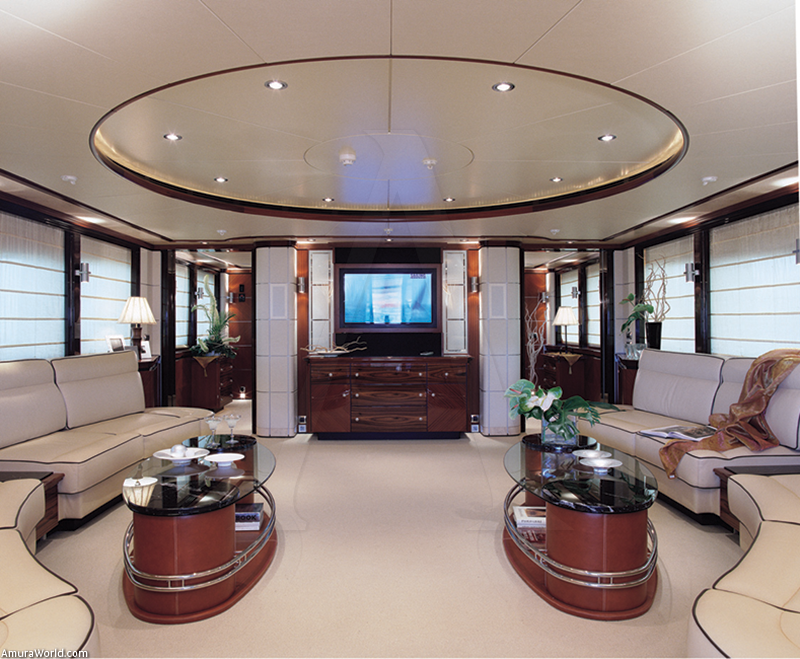