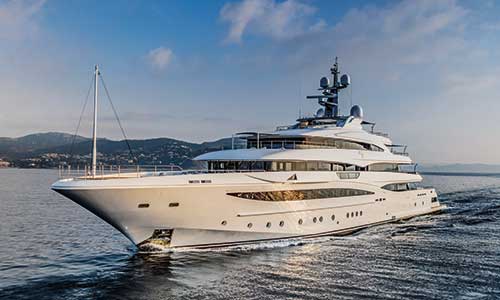 The Definition of Happiness

The Italian shipyard CRN partnered with Zuccon International Project and Winch Design to create the Cloud 9, a 74-meter super vessel with the perfect combination of engineering expertise and cutting-edge design. The yacht finished production in January and was delivered in spring to its owner, who, along with the New Construction division of Burgess as their representatives for the project, was essential in the early process of creation. The end result was a masterful, family-oriented structure with a 13.5m beam, five expansive decks plus a sub-deck, a sleek design, and elegant aesthetics. 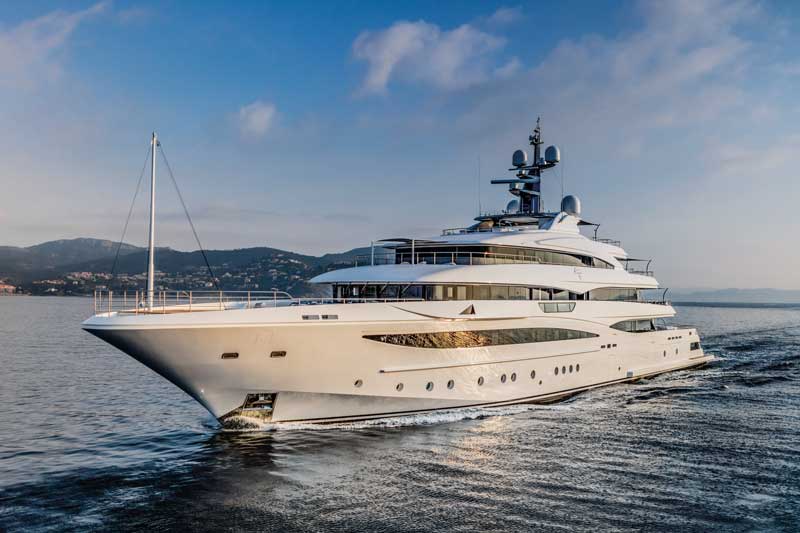 The balance between interior and exterior spaces is characteristic of CRN, and goes hand-in-hand with comfort and a relaxed environment. The yacht accommodates up to 16 guests in eight cabins: the owner’s suite, one VIP cabin and six doubles. Accommodation is also provided for 22 crew members, plus a further two cabins for four staff members. There is a swimming pool on the main aft deck, and inside, we find the saloon that can turn into a fully-fledged cinema with a large screen and projector, which descend from the ceiling by domotic system. The spa area is equipped with a massage table, hair salon and a private bathroom, and beyond, we find the guest cabins, outfitted with AV system, lights and blinds that are managed by a “Lutron” system controlled through iPads. In the bathrooms, the pure white of the calacatta marble on the floor contrasts with the depth of the emperor black marble; unit doors are made in dark oak, engraved with a circular pattern that is repeated on the glass shower doors and on the shower gratings. 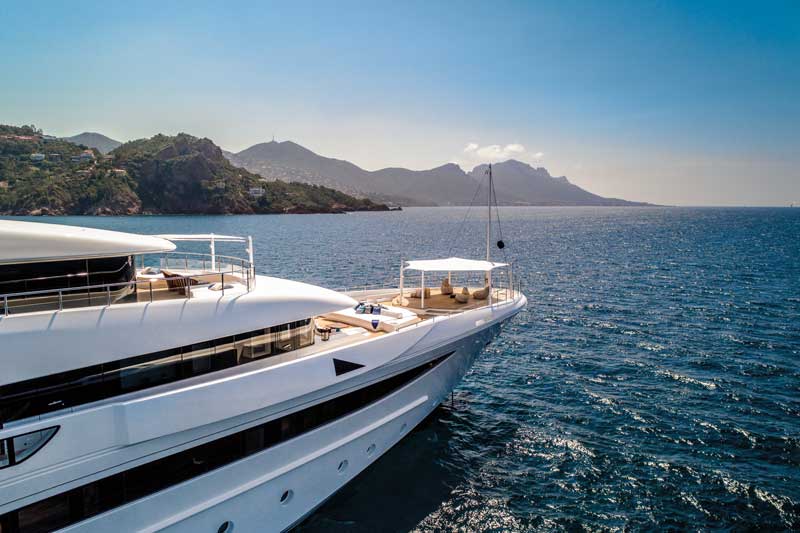 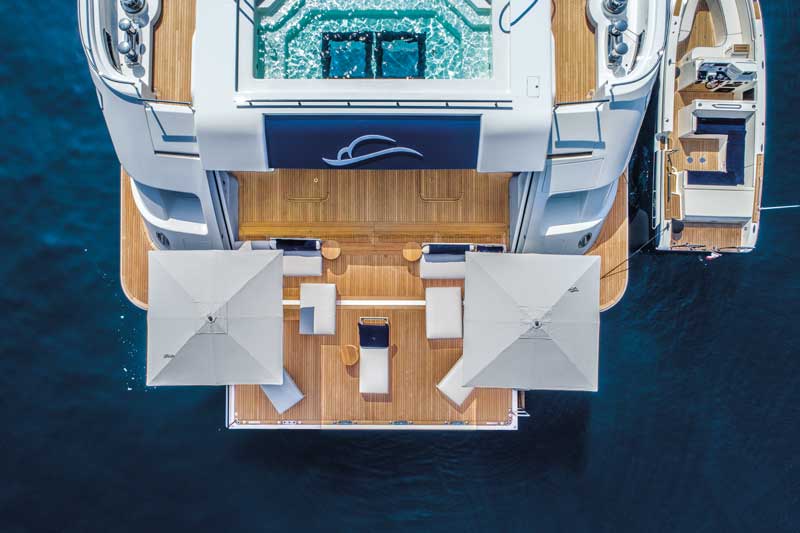 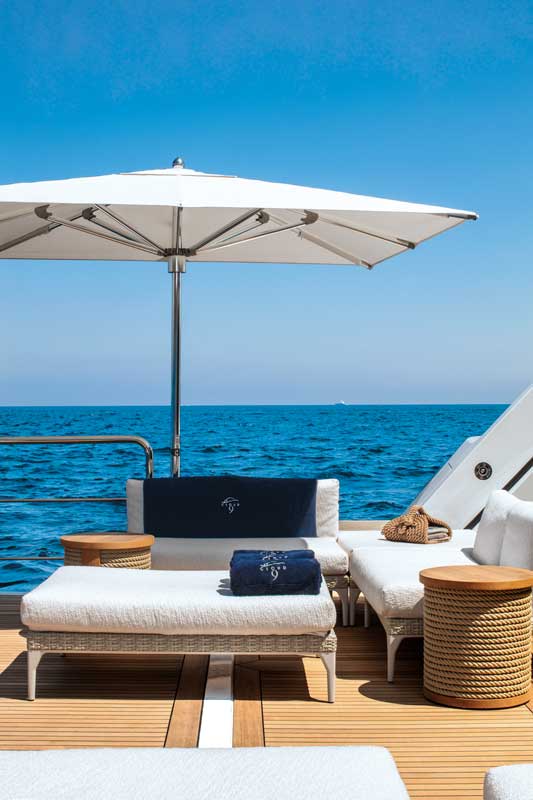 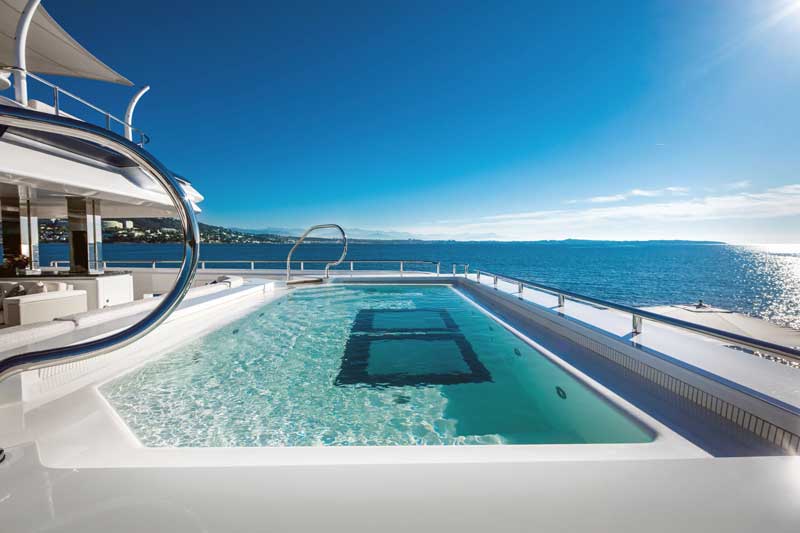 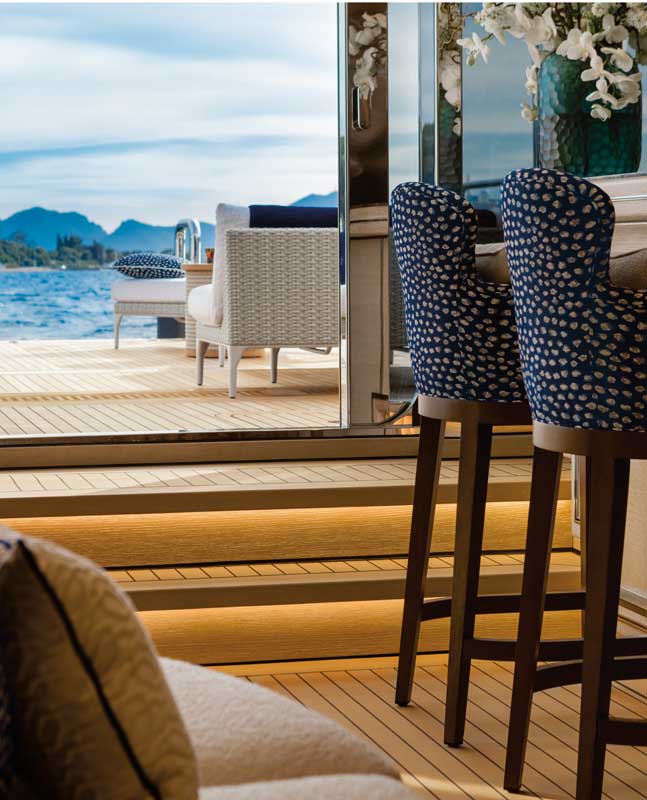 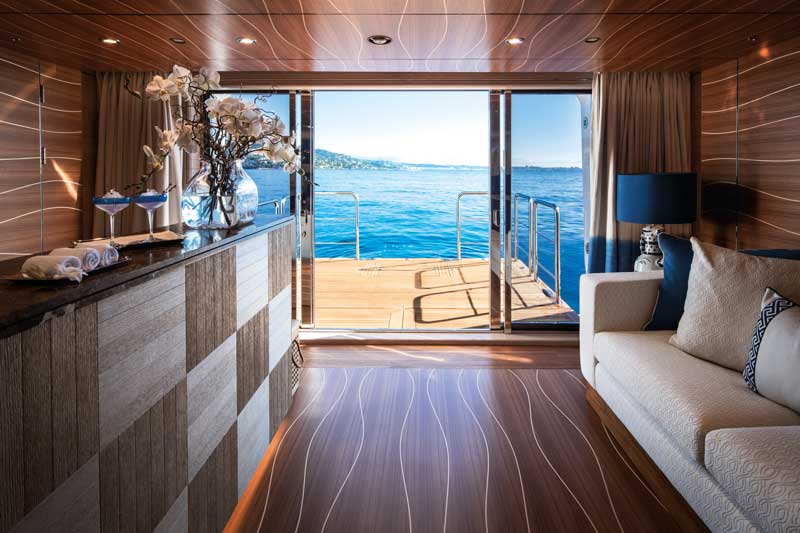 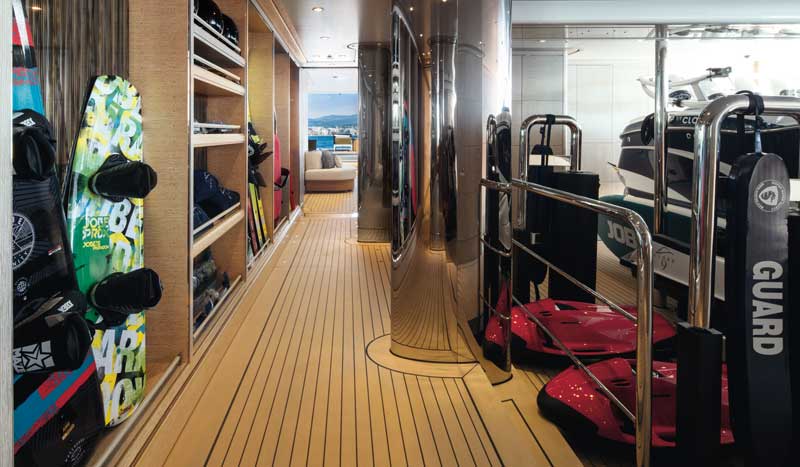 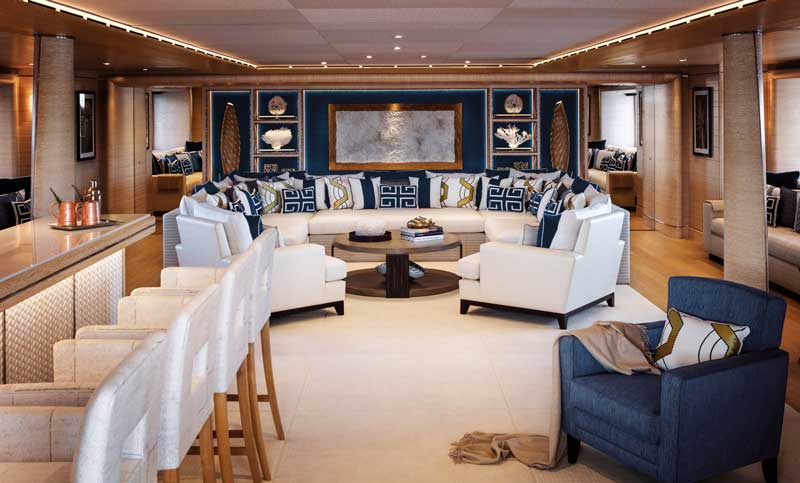 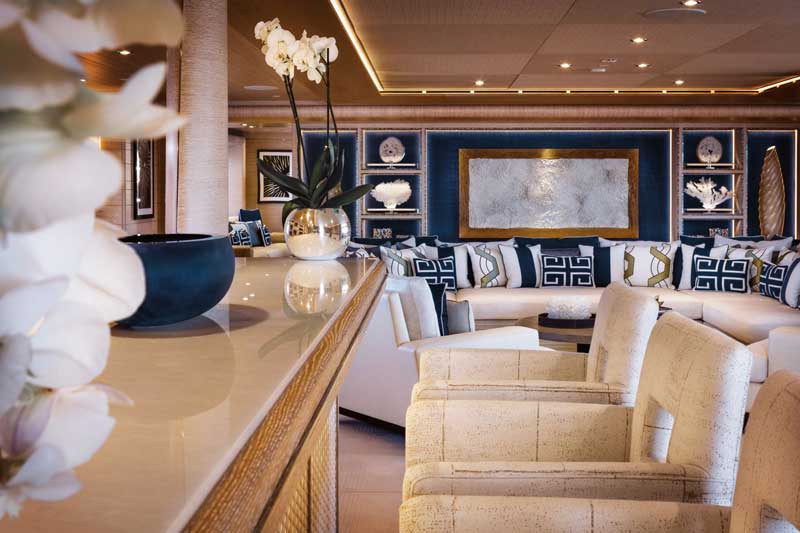 The galley, one staff cabin and crew quarters, including a lounge, a crew mess, office and 12 crew cabins are located in the lower deck, along with the engine room and two garages. The portside garage allows access to the water and opens onto a 25 m2 sea-level platform. The large beach club comes complete with tables, sun loungers and a shower covering an area of over 60 m2. Additionally, the boarding foyer leads to the elevator that connects this area to all other levels including the owner’s suite.

An internal stairwell will lead you to the upper deck, where a stylish dining area will welcome you warmly with magnificent views. The versatile glass-paneled design allows an uninterrupted indoor-outdoor experience; the circular table can be removed to turn the space into an open-air party deck. Beyond it, there is a fully-equipped gym, and to starboard is the VIP suite with marble bathroom and sliding floor-to-ceiling windows which open directly onto the deck.

The Owner’s Deck was designed to provide utmost privacy and luxury. It features a king-sized bed, entertainment area and walk-in wardrobes. Designed and furnished by Winch Design, the walls are decorated with bas-relief, with its leaf pattern engraved into the wood: a true work of art, made by a Veneto-based craftsman and woodworker. Other aspects of the Cloud 9 interior design lie in the details, such as color schemes, different uses of oak, juxtaposed with mother-of-pearl elements, a variety of marbles, marine-inspired artwork and unique bas-relief decorations, such as the bespoke piece in the owner’s suite. The sun deck is the epitome of happiness, relaxation and fun either in the jacuzzi, or shooting down the water slide from a height of over 13m above sea level, plus enjoying meals or drinks at the bar, which is fully-equipped for Teppanyaki-style cooking.

The Cloud 9 will debut at the Monaco Yacht Show in late September and it already is one of the most praised vessels this year, with its aluminum superstructure and steel displacement hull. The yacht is powered by two Caterpillar 3516C-Chd 2000 kW@1600 rpm engines, delivering a maximum speed of 16.5 knots and a cruising speed of 12 knots.

We are extremely proud of these five incredible awards, which pay tribute to the beauty of our magnificent yachts, as well as to the great commitment that our Group, at all levels, has devoted to the business over the last few years.”
Alberto Galassi, Ferretti Group’s CEO. 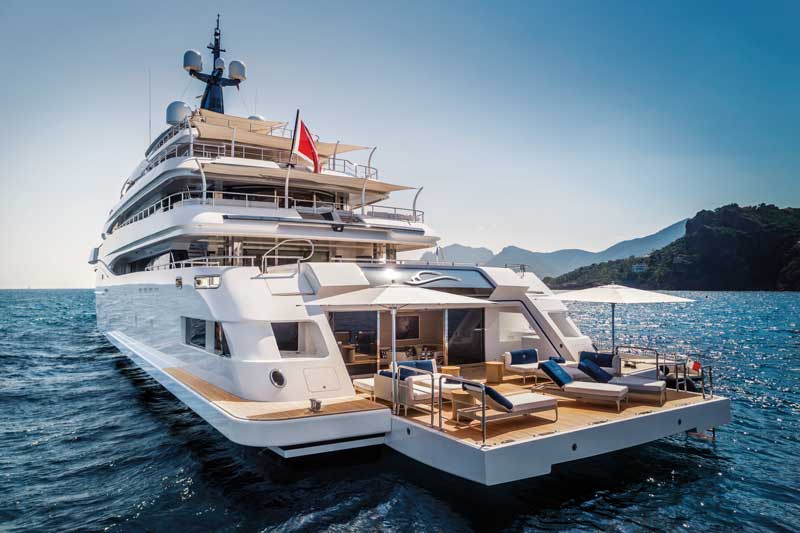 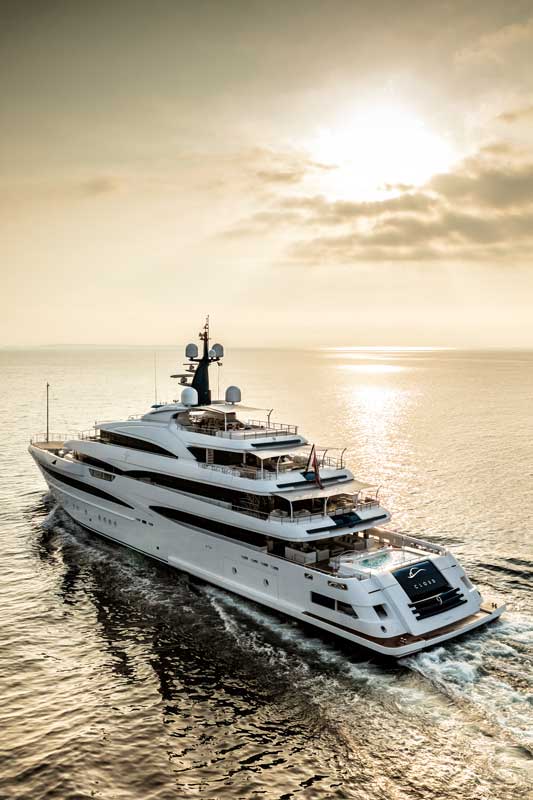