A ghost ship has a reappearance in Cuba? 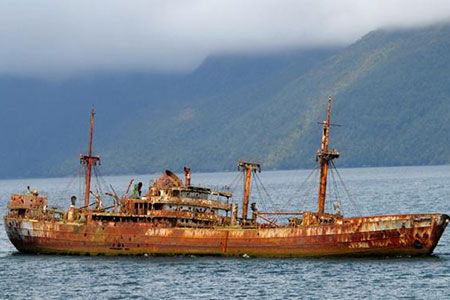 The vessel SS Cotopaxi, of almost 80 meters of length, had vanished 90 years ago in the Bermuda Triangle during the 1920’s, leaving behind a mystery that had never been solved; no one ever really knew what had happened to the remains of the ship or it’s tripulation, both lost in 1925.

This phenomenon -along with others of similar character- has been a legend that revolves around collective imagination; it is granted with a fathomless tone toward the great enigma of the Bermuda Triangle. However, in recent days this tale has taken strength on the internet, since there has been news about an astounding find on behalf of the Cuban coast guard from a ship without it’s tripulation and which allegedly had turned out to be the SS Cotopaxi.

So far, the Cuban coast guard hasn’t made comment regarding this event nor of finding a vessel in these conditions; the supposed witnesses aren’t real and even the photographs shown are taken by people who had nothing to do with this experience.

However, it is quite entertaining to make remembrance of the Bermuda Triangle since it is such a thrilling and intriguing maritime zone. Let’s remember a fragment from the movie

“Close Encounters of The Third Kind”, directed by Steven Spielberg, the fantastic fiction had encountered an unusual discovery of this vessel in the Gobi desert of  Mongolia. Although we must admit that it would be an amazing reality, without a doubt we find this scene much more fantastic than that of the recent viral fiction portrayed by the internet.