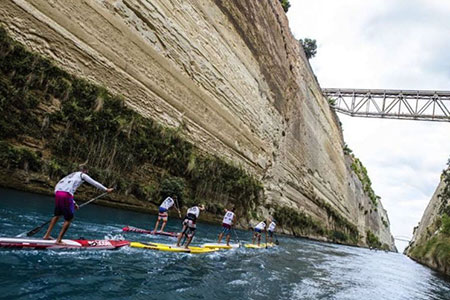 The Corinth Canal SUP Crossing is the most important Paddle Surf event organized by the SUP world calendar.  This race is the longest to go in a straight line in the world. Due to the fact that this competition takes place at the Corinthian Channel, this path traces de 6,3 kilómetros from one point to the other.

We are talking about an artificial waterway that unites the Corinthian Gulf with the Aegean Sea. It’s construction was finalized in 1893 and it’s purpose was to spare a 400 km voyage around the Peloponnesian Peninsula. This body of water has been thought out for small vessels, it’s dimensions are of scarce  21 meters wide and 8 meters deep. Today this channel is the headquarter Corinth Canal SUP Crossing, one of the most important routs whitn Greece.

It was at 12:30 pm on the 1st of November that the horn honked and the participants began to take the exit under the Isthmia bridge. The nervous sound of paddles hitting the water alongside the cheers from the audience at the beginning of the competition gave way to hundreds of meters of SILENCE.

This deep stillness that reigned over the channel allowed the heavy breathing of the competitors to be heard, while trying to keep up with other contestants. The magic of sailing this setting is one of the elements that make Corinth Canal SUP Crossing such a huge event.