Armin Strom Sailing Team is renewed for the GC32 Tour 2016 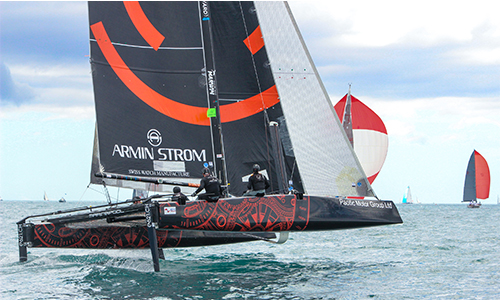 The 2016 GC32 Racing Tour starts at mid-May start, where the Armin Strom Sailing Team has announced a new crew that combines experienced sailors and young talent. They will seek, along with other nine teams, to be crowned with the GC32 Racing Tour title of this year.

This team is composed by the Swiss and four-time Olympic Star class sailor, Flavio Marazzi (skipper), as well as the talent of Sharon Ferris- Choat from New Zealand, Ned Dalbeth –Hudson from New Zealand, Phil Robertson from New Zealand, Diego Stefani from Uruguay, Shane Diviney from Ireland, Alex Bryning from New Zealand. Aboard a new  flying catamaran, the Armin Strom current crew is on its marks for the challenge that represent  the tour, with five events that takes place in three countries; Italy, Spain and France.