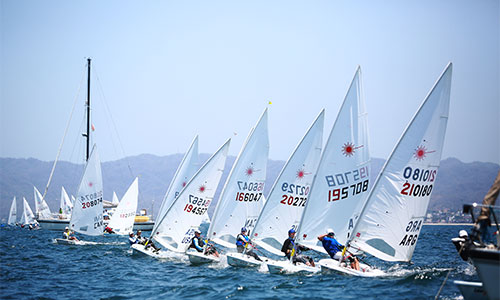 For four months, Puerto Vallarta and Riviera Nayarit were the locations for the FMV CUP 2016, which ended on Saturday May 28 with the closing of the Laser Master's Standard World Championship, event where Mexico was crowned champion in the "Apprentice” category, while the brothers Alejandro Rabago and Pablo Rabago got the third position at the same category.

The FMV CUP left an economic impact of $311,703,000 pesos, consolidating these beaches of Mexico as one of the best courses for sailing encounters in the world, as well as the best tourist spots of the continent. The five races gathered around 1434 sailors from 53 countries in 695 boats by the classes Oceanic, J70 , Cruises, Optimist, 420, Windsurfing and Laser, this last with the most important championship prior to Rio 2016 , "Laser World Championships".

This World Championship gathered 417 sailors from around the world, covering 19 Olympian sailors, including the Mexican Tania Elias Calles and the newly classified to Rio 2016, Yanic Gentry. Throughout the four subcategories championship included 38 Mexicans, achieving the gold in this last stage of Master's in the category of "apprentice".

The event was officially closed by Giovanni Aloi, President of the Mexican Sailing Federation, who said: "This event would not have been possible without the support of the government of Jalisco and Nayarit, the Tourism Board of Mexico and the National Commission of Physical Culture and Sport ( CONADE), who gave us their confidence from the start, but above all, I thank each of those involved in the operation of this event, who through their dedication, passion, patience and excellent work , have raised the name of Mexico".