Abeking & Rasmussen Aviva and Elandess Rendezvous on the River Thames 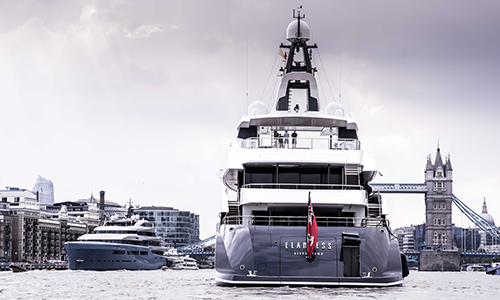 In a display of pure navigational exquisiteness, the new megayachts Aviva and Elandess by German shipyard Abeking & Rasmussen astonished passers-by when the two magnificent vessels made an unexpected appearance in London, right in front of the Tower Bridge.

Aviva was the first to arrive. The 100-meter is the biggest yacht by the yard in Lemwerder. It was previously spotted in front of the Statue of Liberty in New York, causing quite an excitement. On the other hand, Elandess entered the River Thames three days later, fresh from a visit to Norway after its delivery on July 1st- the yacht will surely be one of the most remarkable new builds at the Monaco Yacht Show 2018.

Both these yachts have been designed to be a floating home for the Owners and their families. We are sure that this won´t be the last time for these two masterpieces to reunite again in other waters of the world.