A Pearl on the Pacific

Because of its population, tourism developments, industry and urban infrastructure, Mazatlán is one of the most important cities in the state of Sinaloa.

Even though it occupied the first place in urban development in the state for a long time, today, because of its growth, it is one of a group of cities that concentrate the most activity, and thanks to its tourism riches and its enterprising people, Mazatlán continues to be the “Pearl of the Pacific”.

Mazatlán, which comes from the ancient Nahuatl world “mazatl”, which means “place of the deer,” was founded in 1531. With a total area of 3,068 km2 (1,184 sq. mi), it occupies 5.26% of the state and is the ninth largest of the municipalities. It covers 0.15% of the national territory. Located 2.50 meters (8.2 feet) above sea level, it is flat and slopes slightly towards Estero del Sábalo and the Pacific. The area has abundant water though most of it is salty. 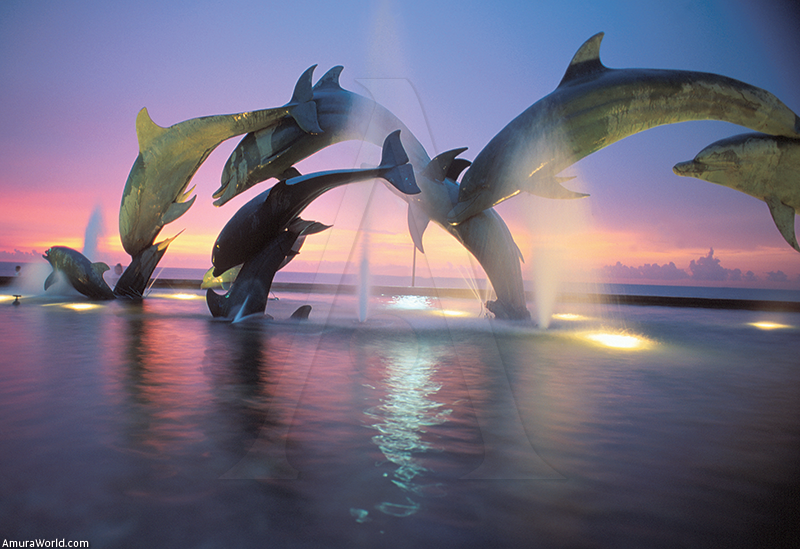 Its population is just over 400,000 inhabitants. Originally the city’s major economic activities wereagriculture, fishing and hunting. Over time, Mazatlán became industrialized and made important advances in the service sector. This is especially true of its tourism infrastructure, one of the city’s major activities, for which it is renowned both nationally and internationally.

It is a beach destination with every modern-day transportation service. It is one of Mexico’s most important ports and receives ships from the Old World. There is also transportation linking Mazatlán to the Baja California peninsula. It is also a port of call for Carnival, Norwegian and Princess cruise ships, among others.

Its international airport helped the development of tourism in the port, this “industry without smokestacks” has made great advances and is one of the state’s most important economic activities. 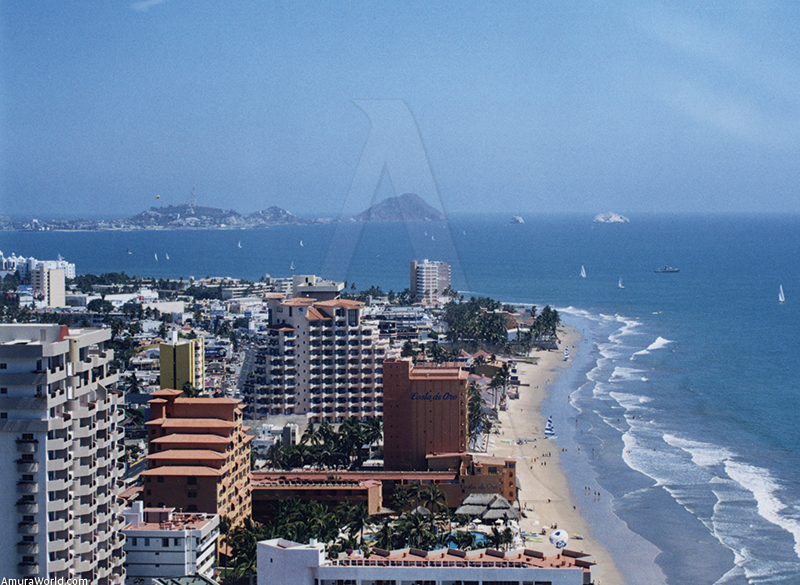 Covers 590 hectares (1,458 acres), is a collaborative project headed by Bahía Investment and a group of local investors.

It will be the biggest Marina in Latin America, an important link in the Nautical Ladder in the Sea Of Cortez, with slips for 800 boats measuring from 25 to 120 feet. It will also host tournaments, like the California-Mazatlán Regatta and regional monthly competitions.

The second stage calls for a professional 18-hole, David N. Fleming golf course, this is the renowned designer of El Tamarindo Club in Manzanillo, Colima, considered one of Mexico’s ten best, and others. It will also have a tennis and yacht club, both with a wonderful view of the Marina.

The beach club will feature swimming pools, palm frond umbrellas, sports areas and gardens, as well as other facilities. 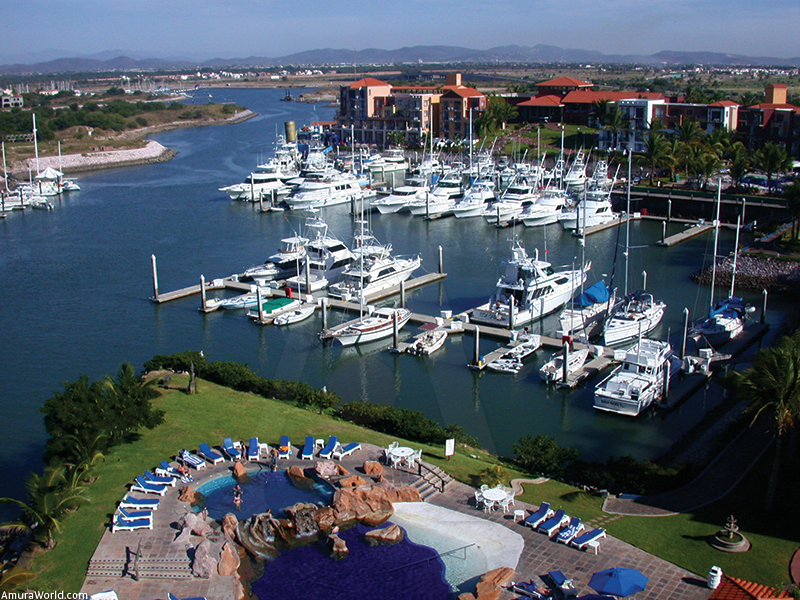 The master plan also includes lots for residences, commercial zones, hotels and condos. For example, Club Real, a short distance from the Marina, is a splendid residential complex with 355 one-family lots between 330 and 650 m2 (3,552 to 6,996 sq. ft.), all with access to five swimming pools, sports and play areas, gardens.

There is also Condominio Puesta del Sol, whose 77 luxurious apartments offer every comfort imaginable, Marina Real Residencial, with 52 lots from 350 to 500 m2 (3,767 to 5,382 sq. ft.) for one-family villas, which will offer an optional boat slip on the docks that will form part of the project.

Over the next 10 years, 500 million dollars will be invested in this mega project, which will generate more than 55,000 jobs.

Mazatlán’s most traditional marina can receive boats from 25 to 120 feet. The concrete docks rise and fall with the tides, making them very stable, and are a safe place for yachts and boats.

Services include boxes for stowing equipment on the dock, drinking water, 30, 50 and 100-ampere electricity, cable TV, 24-hour security as well as a firefighting system and VHF communications equipment (locating channel 16). It also has a dock for diesel and gasoline as well as a place to dispose of solid waste. 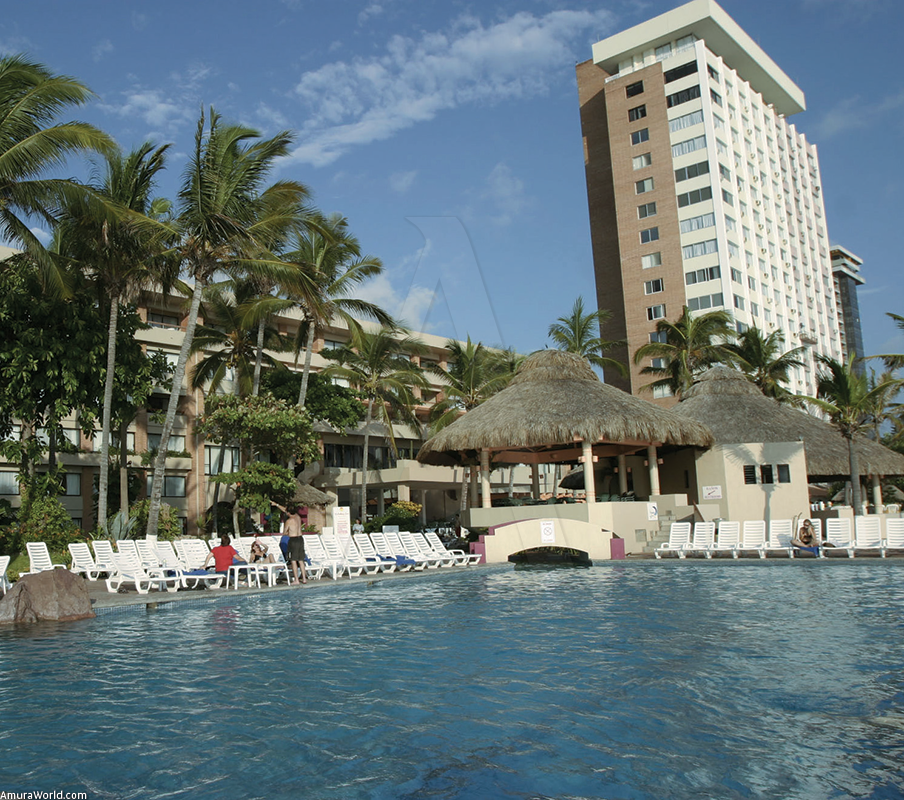 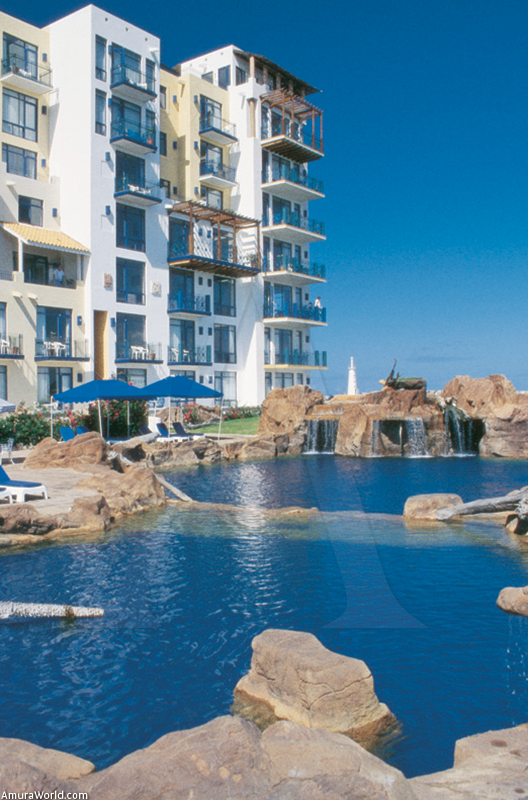 The tide is very stable, around 2.5 feet, and the depth at the entrance to the Marina is of 15 feet. For the safety and comfort of the boats, the jetty protects the dock from easterly and southeasterly winds.

Additionally, the El Cid resort facilities are available to clients of the Marina, including a 27-hole golf Activities Because it is so close to the Tropic of Cancer, Mazatlán’s waters have an ideal temperature that are perfect for water sports, which is why the fun and parties on the beach never end. There are parachute rides for seeing the city from the heights, banana rides, which are a lot of fun, and most of the hotels have a water sports center where you can arrange for water skiing, and rent diving and snorkeling equipment as well as jet skis and Hobby Cats. 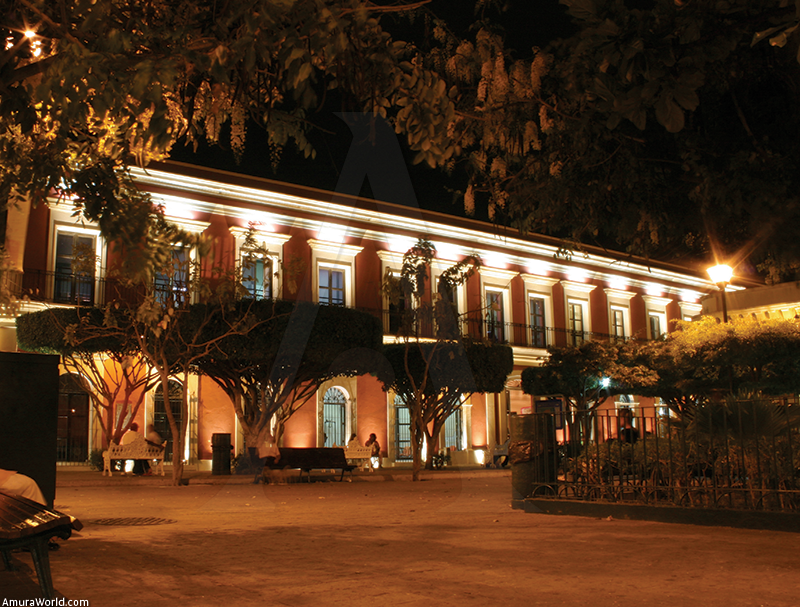 The waves at Los Pinos and Las Brujas beaches are a surfers’ paradise. Twenty minutes from Mazatlán, at the exit to Culiacán, is Pueblo de Mármol,

the favored spot of the state’s best surfers. Each year, Statewide Surfing Tournament is held to select the best sportsmen and women to send to the National Championship. Along with the Great Pacific Marathon, every year there is a speed boat race known as the Governor’s Cup, which is a unique competition in which the best compete. Each municipality sponsors a boat and the event is held in Mazatlán’s nerve center, in other words, its navigation channel.

Mazatlán’s islands have become symbols of this destination. As we had mentioned before, they are called  Isla de la Piedra, Isla de Pájaros, Isla de Venados and Isla de Chivos. They have peaceful, soft sand beaches where you can spend the whole day sunbathing. You can get to them by boats or amphibian ships that leave from the hotel zone. Isla de Venados is an ecological center where the region’s flora and the fauna are protected and where petroglyphs have been discovered. 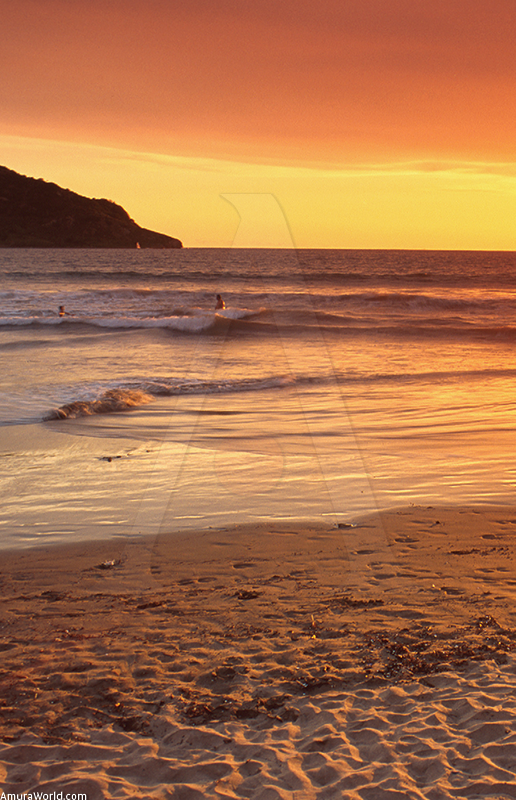 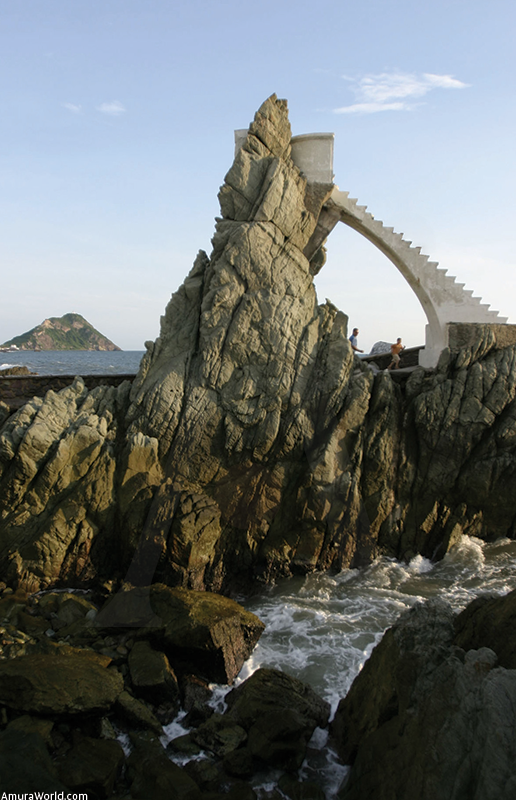 Teacapán, with its abundant flora and fauna, is the most important ecological reserve in northwestern Mexico.

Its Isla de Pájaros is a bird sanctuary and its pristine beaches are considered the most seductive in Sinaloa.

Year after year, many birds, from as far away as Canada and Alaska, fly here to enjoy southern Sinaloa’s sensational winter. There are ample grains, fish andcrustaceans to feed on and this is also a great place for them to mate. It is a photographer’s paradise.

The “La Verde” station, 20 miles away, is located on one of the most important beaches for turtle reproduction.

Turtles come here three times a year, between July and November, to lay their eggs.

Because of its location within a migratory route, the area surrounding Mazatlán offers the best hunting in the continent. Southern Sinaloa is excellent for hunting duck, dove, quail and pheasant. Duck species include blue-winged teal, green-winged teal, cinnamon

teal, black-bellied whistling-Duck. Dove species include bare-eyed pigeon and woodpigeon. Outfits in Mazatlán can make hunting arrangements for you to fit in with your travel plans. 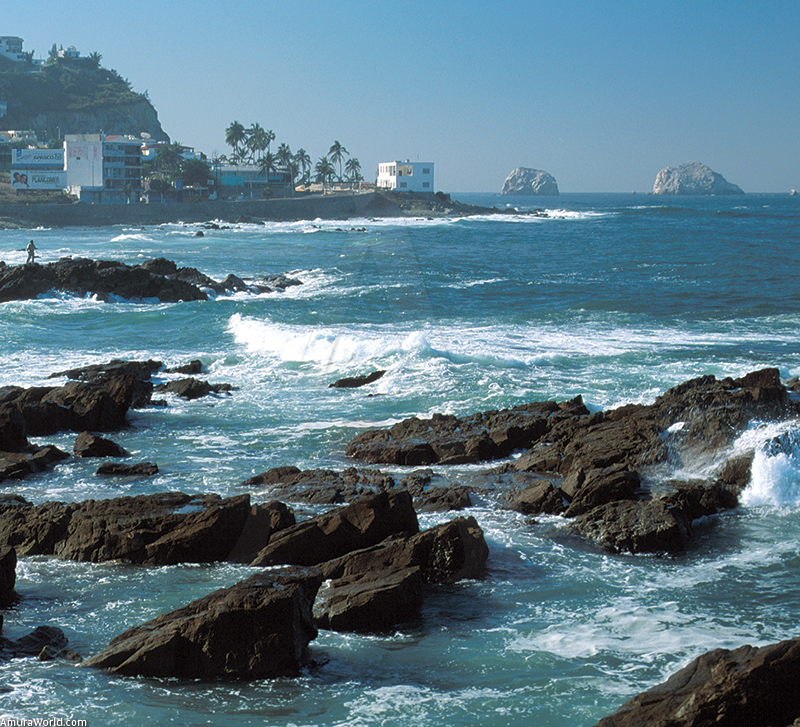 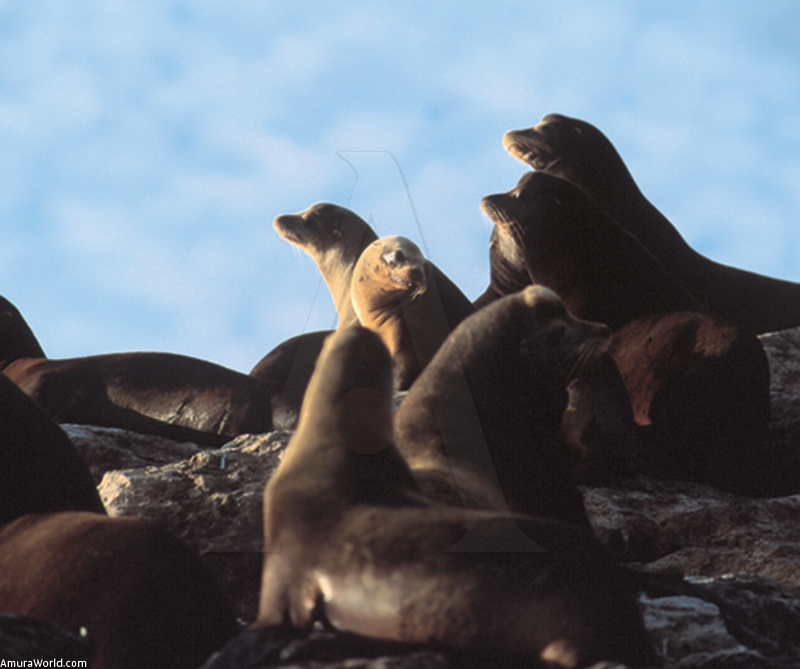 Motocross, drag races, exhibits and anything related to motorcycling takes place in Mazatlán. Dates of each vary and the one that is closest to the heart of the residents is the International Week of Motorcycling.

The sixth time it was held it won the title of “Best motorcycling event in Mexico”. Thousands of bikers from all over Mexico, as well as from other countries, make the spectators tremble when they see the best motorcycles in the world and their eccentric drivers.

Mazatlán is a haven for biking enthusiasts, which is why all kinds of competitions—national and international— are held all year round. For example, in the mountain biking category there was a worldwide competition held in 2000 on the excellent Bitachi and Piedras Blancas paths.

There are route competitions, such as Santa Rita, which ascends from 0 to 1,500 meters above sea level (0 to 4,921feet) and includes route, mountain, counterclockwise and circuit tests, as well as the Vuelta Mazatlán. However, if cyclists just want to experience moments of tranquility, it is worth noting that there are ecotourism-oriented bike tours and that Mazatlán has ideal mountains and valleys as well as the malecón, the seaside promenade. 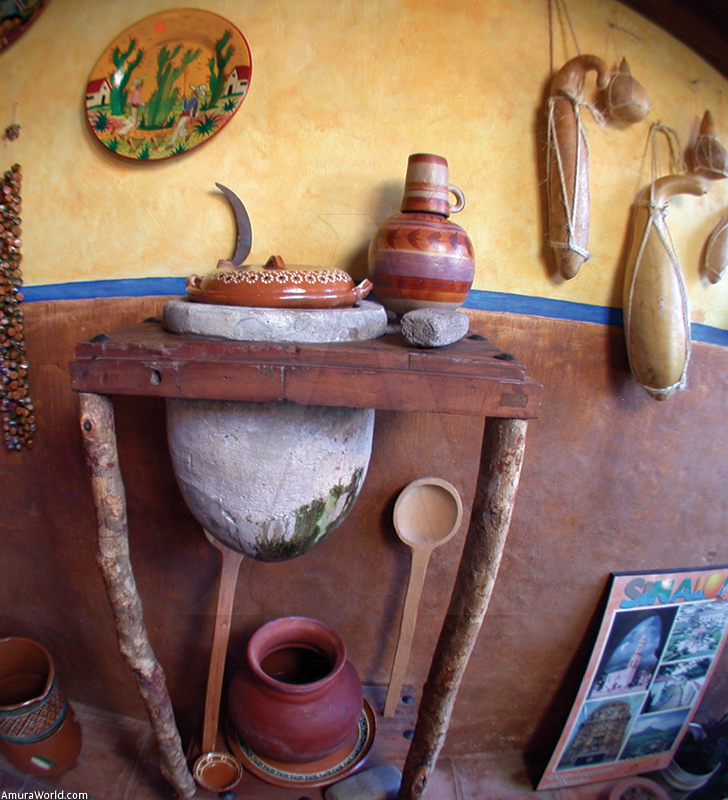 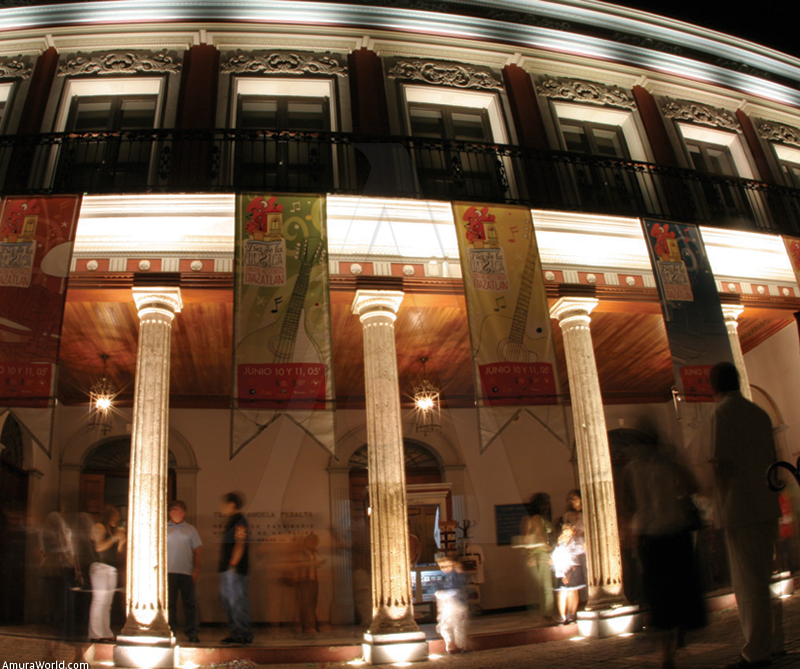 Mazatlán is considered the shrimp capital so it is logical that the most popular dishes are prepared with this delicious crustacean. But not all is shrimp.

One of the most popular dishes, in and outside is chilorio, pork prepared with a sauce made with ancho chili and other spices. It is very popular as a breakfast dish.

Pollo asado estilo Sinaloa (Sinaloa-style roast chicken) is another specialty that has become popular because it is so delicious. Mochomo, thin, pounded beef steak, is also a specialty of the state, as are pichones empapelados (doves cooked in paper) and, of course, Sinaloa-style shrimp, marinated in lime juice, stuffed with grated cheese, wrapped in bacon or grilled.

Two areas of the port contain most of the tourism attractions: the Zona Dorada (Golden Zone) and the Zona Sur (Southern Zone). The former is in the northern part of the city, where the best hotels and beaches are located. The latter is in the Centro Cívico (Civic Center), where visitors will find the hustle and bustle of the Pino Suárez market blending perfectly with Viejo

The Zona Sur borders the Historic Center, the pride of the residents, where you can see the city in the cultural context of its era, especially its neoclassic architecture with its rich proportions, textures, colors and décor. 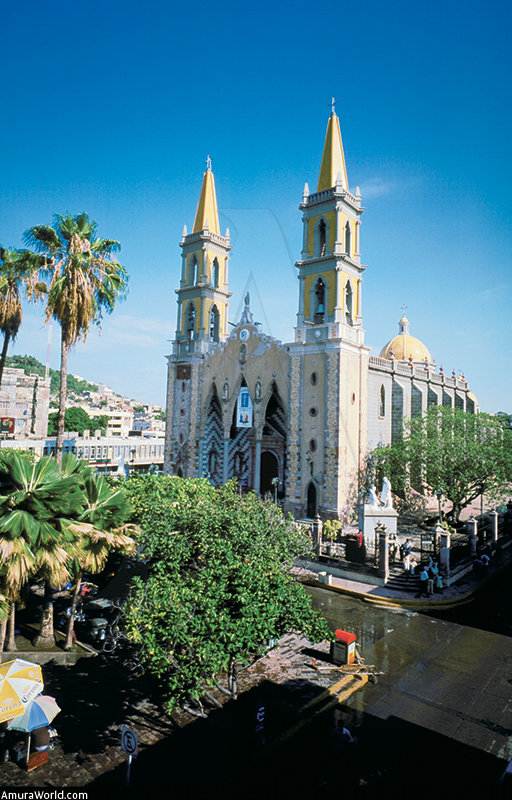 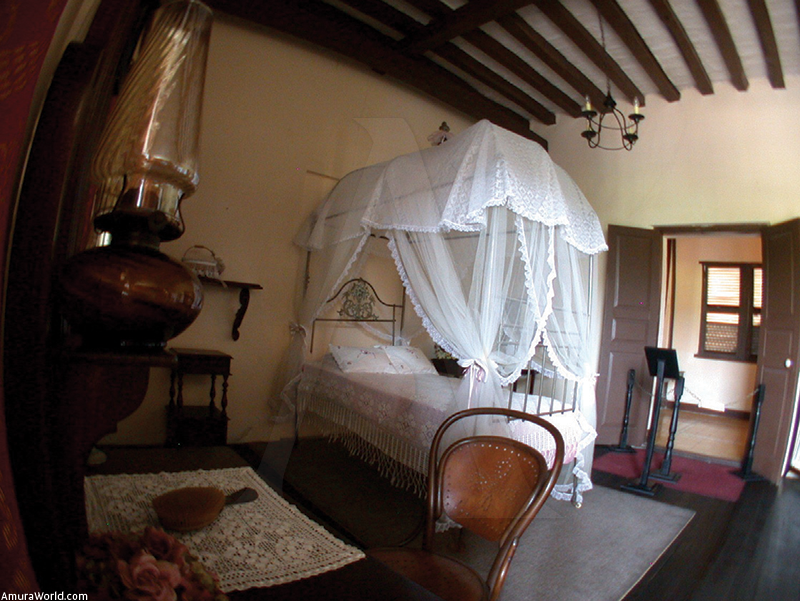 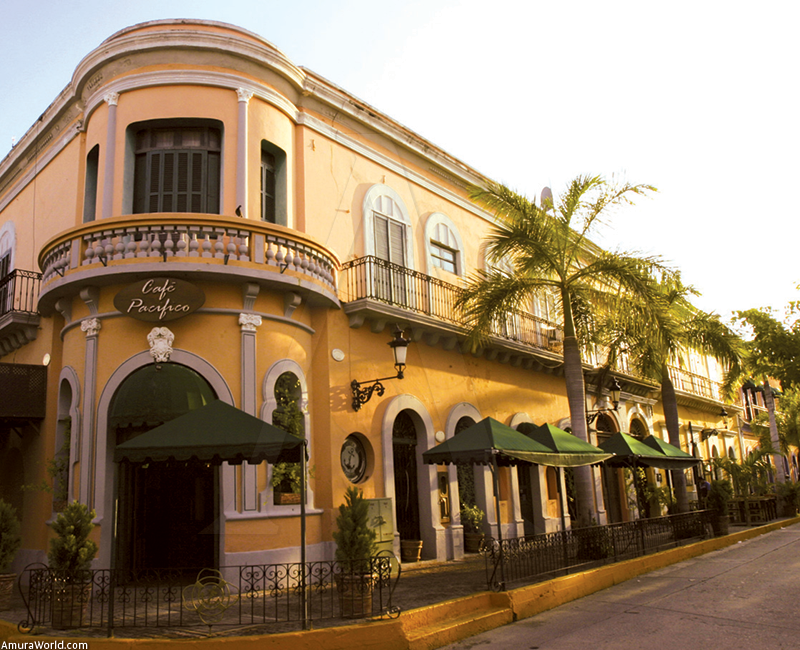 Shopping centers and a wide variety of dining options are an added attraction to Mazatlán’s architectural wonders. There are also many interesting places to explore and lots of beautiful natural settings, like esthe old bay in the Historic Center, parks, botanic gardens and the Glorieta del Clavadista (Clavadista traffic circle), among others.

North of the avenue that runs along the coast is Playa Cerritos and, to the south, Isla de Piedra and Cerro del Crestón, also known as El Faro. Today, it is the world’s highest, natural, still functioning lighthouse, measuring 157 m (515 ft) high.

Mazatlán’s Zona Dorada is located along Gaviotas avenue. The port’s most famous jewelry shops and hotels are found here. About 50 years ago the area was known as “Laguna del Camarón” but the lake was drained and the land was used for tourism services. Nowadays, it is Mazatlán’s most cosmopolitan area and offers a range of entertainment options.

Mazatlán has first class hotels facing the cleanest, bluest waters in the country. They are set along 36 km (22 miles) of the malecón, one of the longest tourism routes in Mexico that ends in the south, where the oldest, natural highest lighthouse of the world is located. According to the state’s Ministry of Tourism, there are 9,200 rooms ready to receive national and international tourism. Also, in the heart of Historic Center is Mazatlán’s most prized jewel: the Ángela Peralta Theater, known before as the “Teatro Rubio”. Built in the last century, and after it almost fell to ruin, it was rescued by federal, state and municipal authorities and restored between 1990 and 1992. 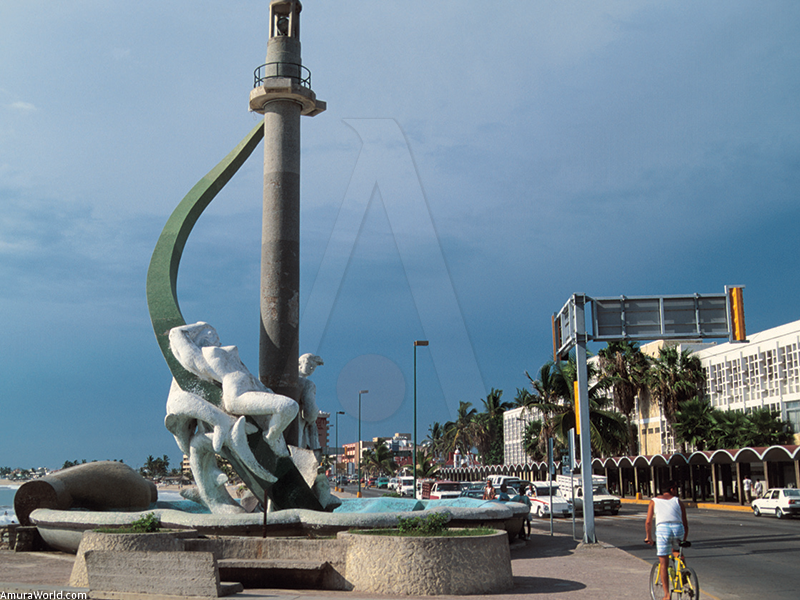 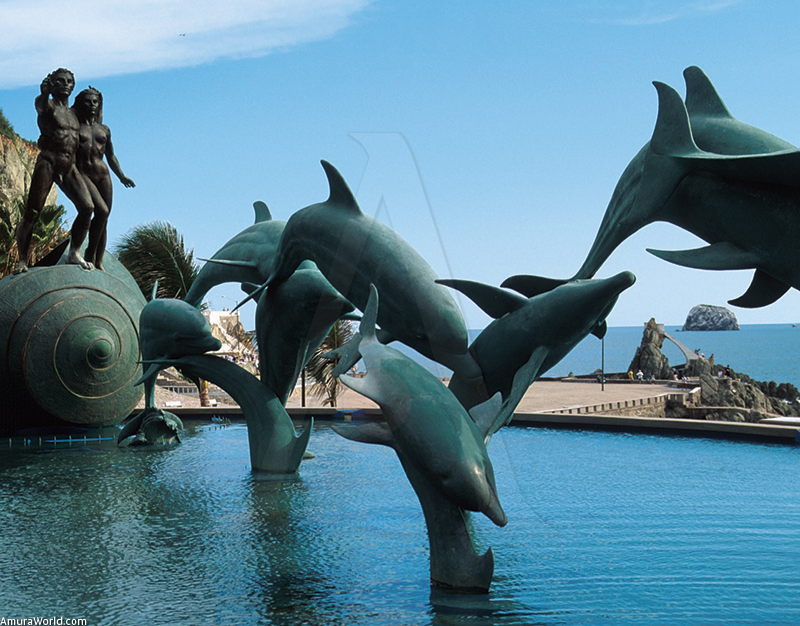 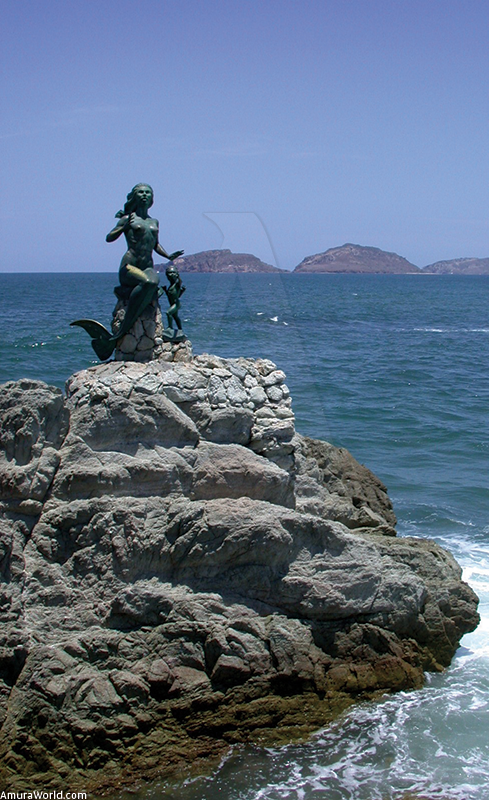 Additionally, during your visit to Mazatlán you can purchase a diamond from Diamantes Internacional, a jewelry store specializing in these stones and other precious gems. They have 120 shops located in the Caribbean, Alaska, Las Vegas and Key West.

A popular adage says that the old days were better and this is why residents recommend a tour of Old Mazatlán, located in the southern part of the city. It is a favorite of residents and visitors and it is home to many historic and architectural jewels. It is also a place where, from the moment you arrive, you can breathe in peace. Many delightful coffee shops, bars and typical restaurants are located there.

Old Mazatlán’s most distinctive quality, however, are its old, welcoming streets and alleyways lined with colonial buildings. Losing yourself in them, enjoying the peace and tranquility of places filled with Mexican history, and exchanging greetings with the residents, makes this a unique experience that enhances your enjoyment of this rich tourism destination.