The Sailfish Capital of the World

If you are a lover of the sea, fun, ecology and history, Manzanillo, on Mexico’s golden Pacific Coast, is a travel destination par excellence. It is a place to experience a wide range of activities to the maximum, but especially those that involve the sea.

Considered the Mexican Pacific’s most important commercial seaport, Manzanillo is situated on a navigation route that links the Far East, the American Continent and Oceania. It is located in the state of Colima, 94 kilometers (58 miles) from its capital, and is bordered on the north by the municipality of Minatitlán; on the east by Coquimatlán and Armería; to the south by the Pacific Ocean; and to the west and northwest by the state of Jalisco (325 km or 201 miles from Guadalajara).

Manzanillo is made up of two large twin bays: Santiago and Manzanillo, divided by the Santiago Peninsula. Important, world-class tourism complexes, with excellent infrastructure, have gone up around these bays. 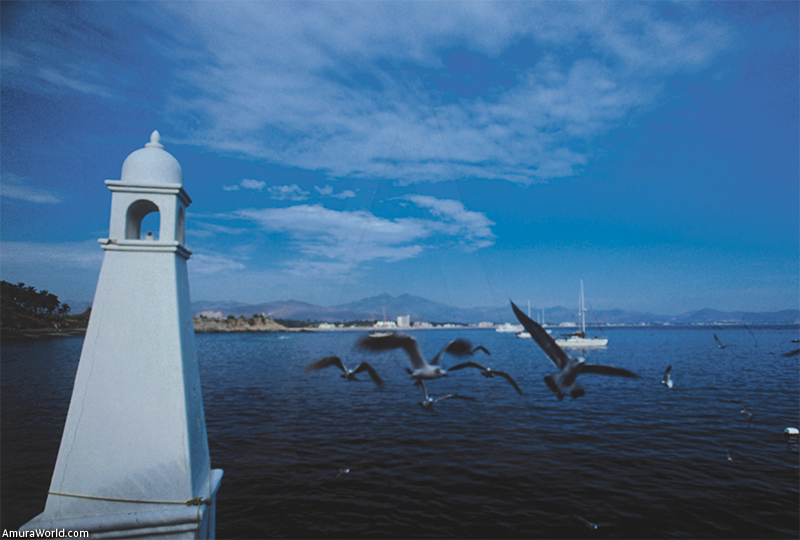 One of Manzanillo’s greatest attractions is its pleasant, tropical, year-‘round climate, considered to be one of the best on the Pacific, with average temperatures ranging from 26 to 28 °C, although the mercury climbs during the summer (30 to 34° C). 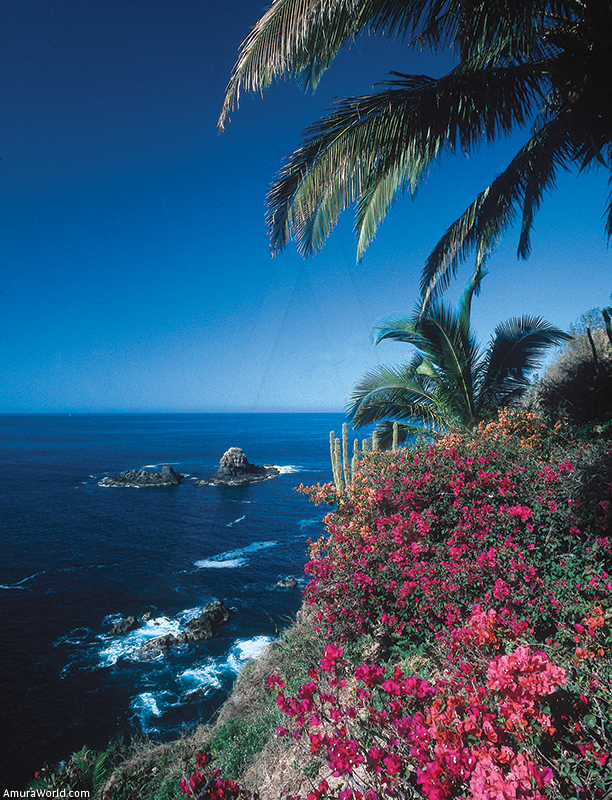 A Vocation for Tourism and Commerce

In past years, its explosive growth and development have benefited both the country’s commercial activities and the tourism industry, with resorts, hotels, golf courses, marinas and a variety of deluxe services for visitors, both domestic and foreign.

In many senses, Manzanillo is not only a sun and beach destination. It is a place where you can enjoy vacations filled with contrast, where you can spend days doing absolutely nothing or choose from among a wide range of land and sea sports.

For many years, Manzanillo has been known as the Sailfish Capital of the World. In 1957, three hundred and thirty-six species were caught in its waters, making it an appealing destination for sports fishermen. One of the most important of these species is marlin, which is why Manzanillo has been the site of the International Dorsey Tournament since 1954.

Manzanillo was the third port created by the Spanish on the Pacific and it rapidly became an important starting point for maritime expeditions. For example, this is where the legendary Nao de China arrived with its valuable cargo of Oriental products. 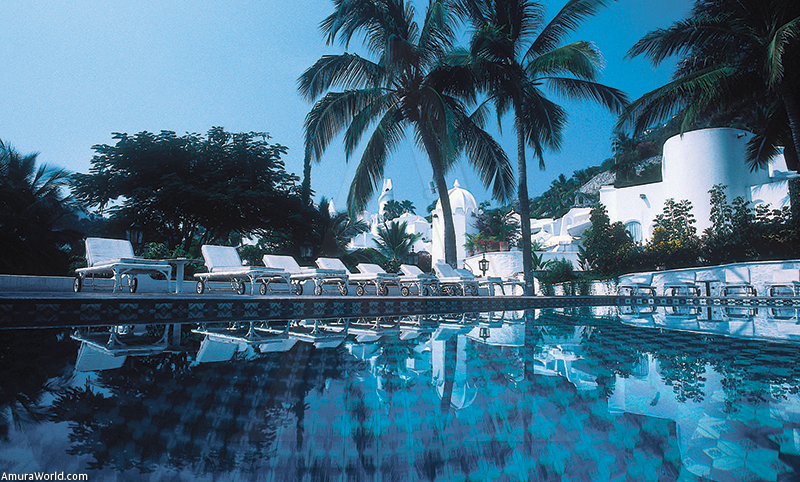 In December 1993, the Administración Portuaria Integral de Manzanillo (API Manzanillo) (Harbormaster’s Office) was built and began operations on February 2, 1994. Among its functions are the administration, promotion, construction, development and maintenance of the infrastructure of Manzanillo’s ports.

This area, which covers 437 hectares, is divided in two polygons. The first, which comprises 30.9 hectares, is where the Pemex terminal is located. In the future it will be the cruise line terminal. Polygon 2, known as the San Pedrito Interior Port, is where most of the development has taken place, with specialized terminals and installations, as well as an area reserved for the port’s future growth. 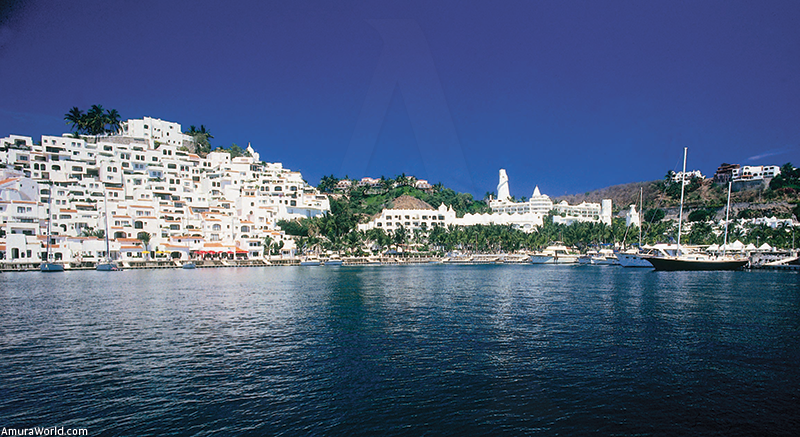 Marina Las Hadas, the frame for the marvelous setting of the Las Hadas Golf Resort & Marina, is where important international events take place, given that Manzanillo is known as the Sailfish Capital of the World.

Marina Las Hadas can perfectly accommodate 70 yachts, and its electrical installations have a capacity for 20, 30 and 50 amperes, 110-220 volts, with individual meters for each vessel.

There is also a shopping area with laundromat, mini-market, tobacco shop and Internet café.

The Marina features sports fishing boats including a 44’ Hateras, 34’ Bayliner, 65’ sailboat and a catamaran that can hold 150 passengers. 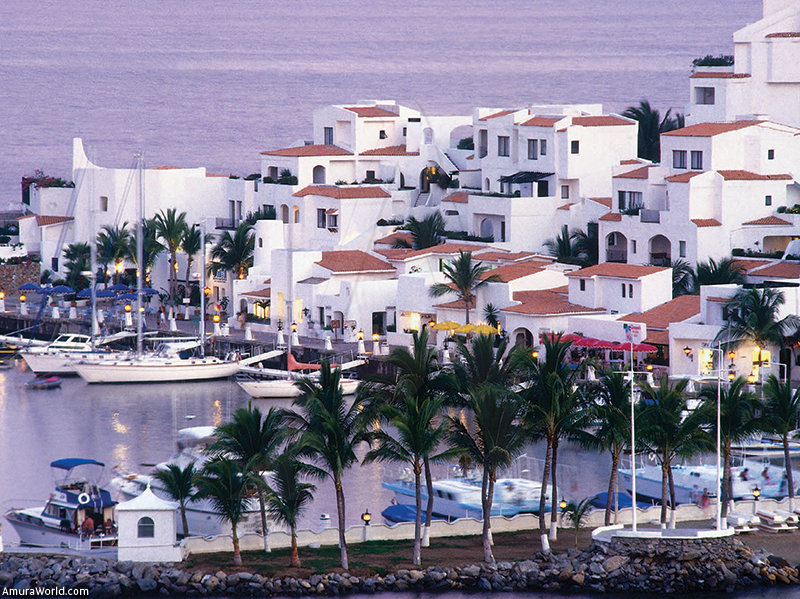 Yachts and sailboats are safe in the marina of the Hotel Grand Bay Isla Navidad & Resort that is located on a natural harbor discovered by the Spanish on Christmas Day (Navidad).

The 200-slip marina is perfectly designed for boats from 30 to 150 feet in length. There is electrical wiring, drinking water, fire-fighting equipment, telephone service, public bathrooms, and diesel and gas for boats.

As the result of Manzanillo’s tourism promotion activities as well as to its participation in events that involve the major cruise lines, the number of passenger ships arriving here has increased.

Advances in this area have also resulted from the diverse tourism products the state is offering visitors and cruise line passengers. 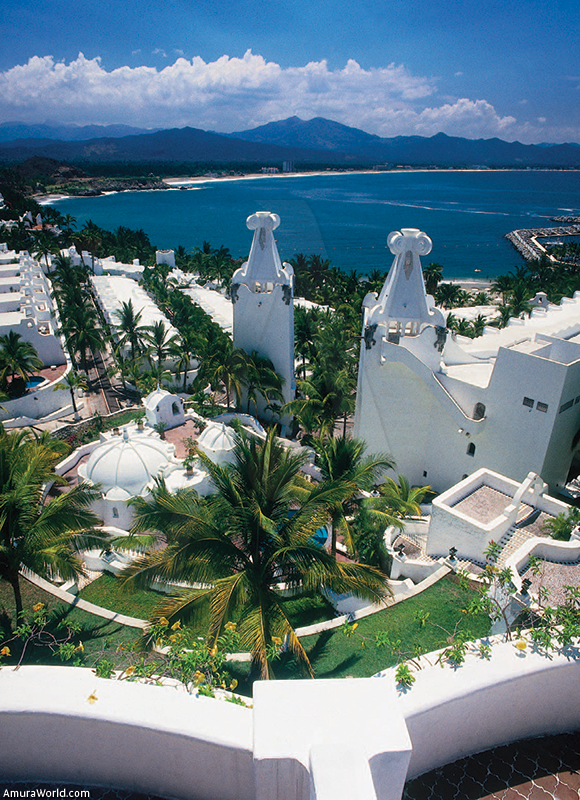 These include projects in Puerto Santiago de La Laguna, a real estate tourism development located on La Boquita beach in Laguna de Juluapan, on an area of 348 hectares. Estimated investment is 800 million dollars. It encompasses hotel, condominium and residential lots, as well as a tourism marina, and areas for shops, services and recreation.

Another is Miramar Peñitas or Cascadas de Manzanillo, in which both Mexican entrepreneurs and investors from Minnesota are involved. They are planning a tourism and commercial development on a 218-hectare property, located on Miramar beach, with an investment estimated at 386 million dollars. This project includes four hotels, residential complexes, a nine-hole golf course, reorganization of Laguna Peñitas and service and recreation areas.

It is also important to mention the Manzanillo Tourism Dock, located in the Historic Center, built on what was formerly the old fiscal dock. Estimated investment is 35 million dollars. It will have two berths for cruise liners, 18,000 square meters (59,000 square feet) of commercial areas, offices and entertainment distributed on three levels, a marina for 120 yachts and sailboats, and parking for 260 cars. 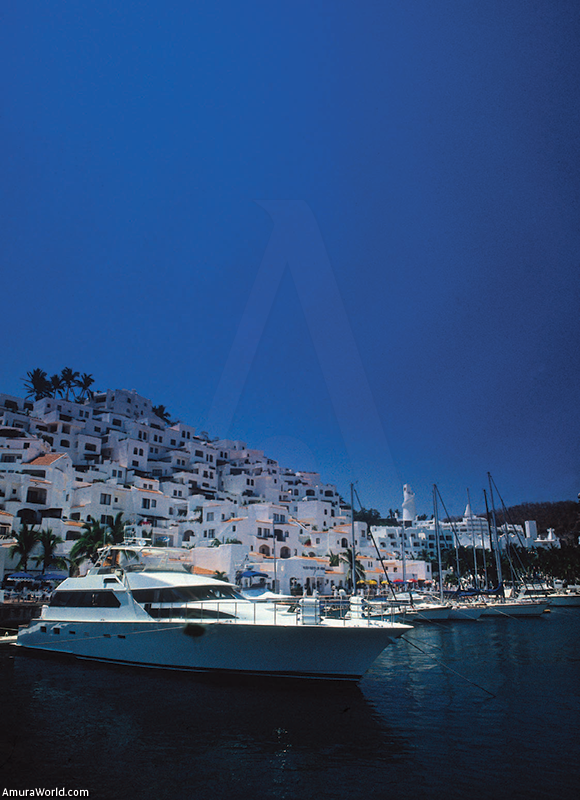 What Can You Do in Manzanillo?

In spite of the fact that it is an industrial port, southern Manzanillo has beautiful beaches. Although it is a little disorganized, if you follow the main avenue in the direction of the hotel zone, you will find water that is great for swimming and water sports.

Playa Azul marks the starting point for the major resorts, followed by entrances to La Audiencia and La Escondida beaches, that shelter marvelous hotels, homes and buildings, almost all white and contrasting with the blue sea and the green hills. To the south is Santiago Beach, with taller waves, where it is common to see surfers practicing this sport. 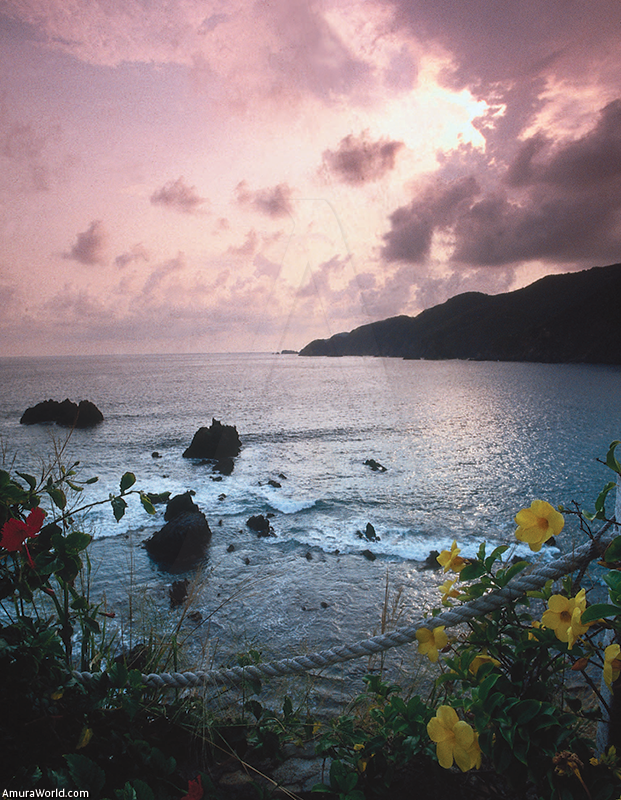 One of Manzanillo’s greatest tourism attractions is its internationally renowned fishing.

Deep sea sports fishing requires regular-sized boats that can go distances greater than 16 kilometers (10 miles) in the open sea, where the depth of the waters is propitious for reeling in large species like sailfish and black, striped and blue marlin.

The advantage of Manzanillo over other ports is that to catch a fish you only have to travel 10 to 15 minutes from where you started. To enjoy deep sea sports fishing in other tourism destinations you have to sail two to three hours before reeling in a fish.

Sailfish, marlin and dorado qualify. Registration is open to the general public. The event is organized by the Manzanillo Fishing Club.

All fishermen and women are welcome to enter. They should register previously with the Organizing Committee of the Manzanillo Fishing Club. 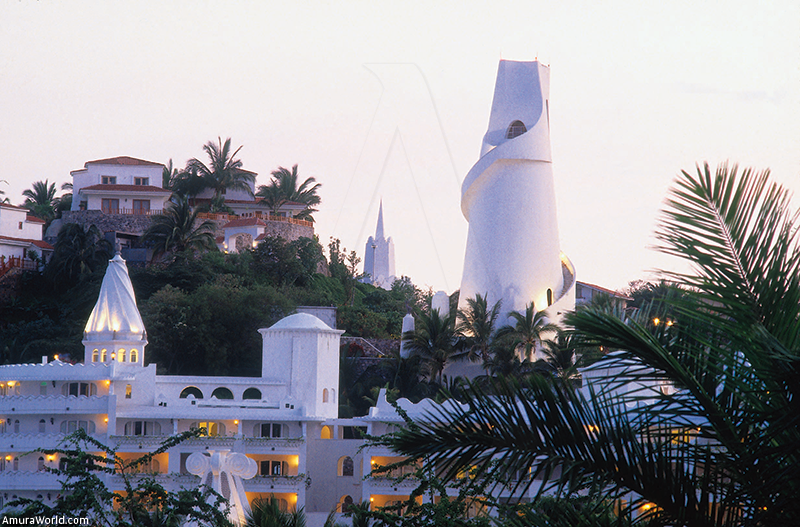 Another sport practiced in Manzanillo, that has made it internationally famous, is golf, thanks to the wonderful courses that have become the sites of international tournaments in which the world’s most famous golfers play.

The most spectacular course is at Isla Navidad. Its meticulous design is the work of architected Robert von Hagge, who is responsible for 184 other courses, in addition to this one, and has participated in the planning and design of another 200 around the world. The 27 holes of the course have made it challenging for many golfers. The golf club also features other services, including a Club House and the International Golf School.

One of the most popular golf courses in this destination is the 18-hole Las Hadas course. It is adorned with a great number of palm trees that dance in the wind and silently observe the shots of every golfer who plays there. Designed by Pete and Roy Dye, it is one of the most beautiful tropical courses in the world. Among its multiple attractions is the Salahua River that bends and winds through the course, making each shot a challenge and at the same time a memorable experience.

Manzanillo’s third golf course is located in Club Santiago. This nine-hole course, designed by Larry Hughes, runs along the waterfront, which gives it a special, warm touch.

There is also the 18-hole El Tamarindo golf course, designed by David Fleming. 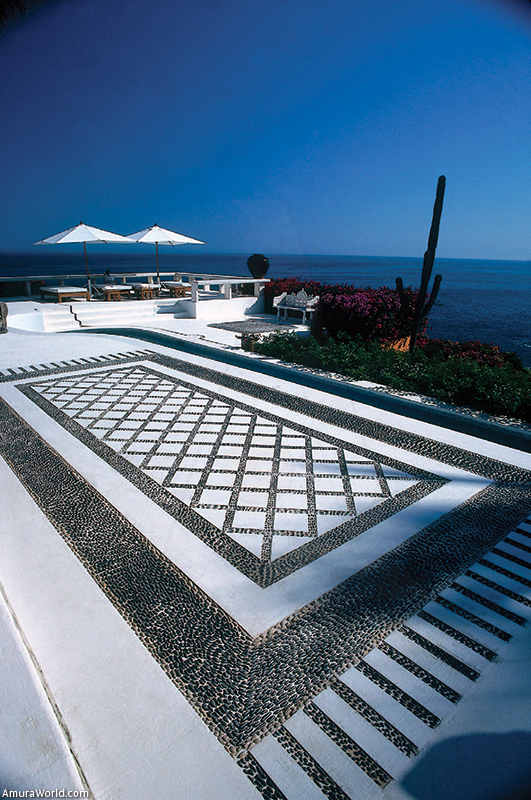 Visitors who prefer their activities on terra firma will be glad to know that the Historic Center has officially been transformed. An impressive sculpture by the artist Sebastian welcomes from a distance. Twentyfive meters high, 30 meters (98 feet) at the base and weighing 70 tons it represents a sailfish. It looks fantastic on the esplanade, at the end of the remodeled malecón (seaside promenade), the first stage of which is already completed.

The design and remodeling of the Center is the work of architect José Luis Ezquerra de la Colina. It was his design and construction of the Las Hadas resort that put Manzanillo on the world tourism map.

Overall investment by the private sector in the downtown area is estimated at 300 million pesos, and includes the restoration of the fiscal wharf in the commercial and office areas, as well as a terminal for cruise ships, marina for yachts, an executive hotel and a building for parking. 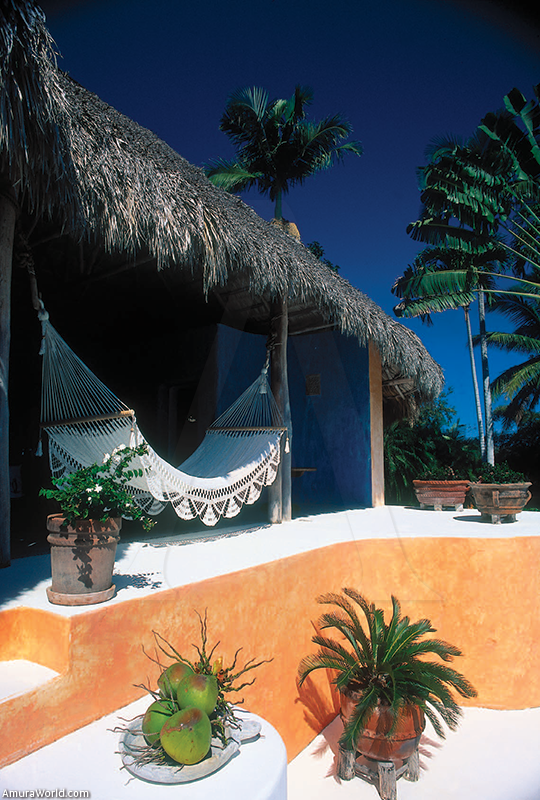 The Universitario de Arqueología (School of Archaeology) and the Conchas y Caracoles (Shells and Snailshell) museums are of great interest to tourists who can also visit the La Campana archaeological area located on Av. Tecnológico s/n, Villa de Álvarez, Colima and El Chanal, also in the state capital. Of course, you must also visit Colima, Comala, Nogueras, Villa de Álvarez, Tecomán and the picturesque community of El Remate.

There is excellent eco-and adventure tourism in the La Floreña grottoes, San Gabriel and Tampumachay, in the caves and canyons of the Sierra de Manantlán Biosphere Reserve, and in Gloria Escondida, at the foot of this Natural Protected Area. 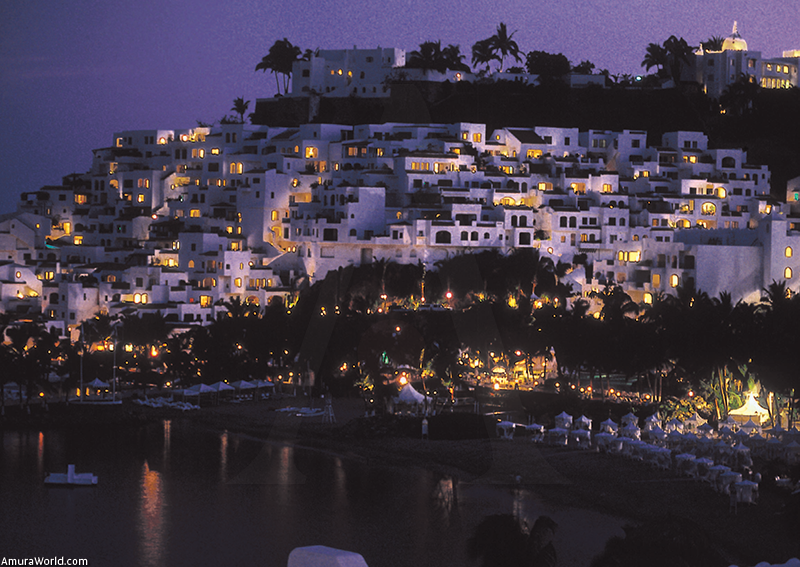