Where the sun shines every day

Prior to the arrival of the Spanish, in 1530, Acapulco, which means “the place where the reeds were destroyed,” was a fishing village.  Once the conquistadors settled here, it became a galleon-building center.  That was how it developed into a key location for the exploration of the Pacific and, later, a crucial point in the historic route between the Philippines and Spain.

In spite of its natural beauty, it wasn’t until1927 that the first road to Acapulco was inaugurated.  However, only a few brave travelers made the trip from Mexico City, which lasted more than a week, but it sparked the opening of the first hotel.

The port was peaceful until 1945 when a new highway was built that reduced travel time from the nation’s capital to six hours.  The first direct international flights began to arrive in1964 and a short time later it was the destination favored by the Hollywood elite and the rich and famous from around the world. 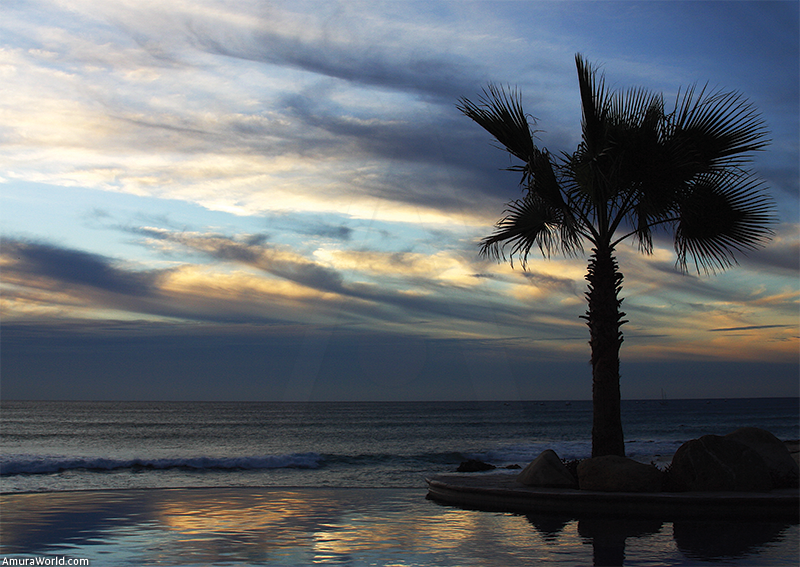 Its exquisite setting, climate and golden sand beaches are what attracted the  “beautiful people” to Acapulco.  Suddenly, it became the place for international visitors and celebrities to build their vacation homes.

With its tropical climate and sunshine 365 days a year, Acapulco is a beach destination par excellence.  It is located on Mexico’s Pacific Coast and is linked to Mexico City by the 350-kilometer Carretera del Sol. Its international airport handles 9,384 domestic flights and 2,067 international flights a year, and its seaport welcomes more than 100 cruise ships annually. Acapulco’s hotels accommodate some 1.2 million tourists per year, who spend approximately 1.5 billion dollars, making this one of the most important beach destination on the Mexican Riviera. 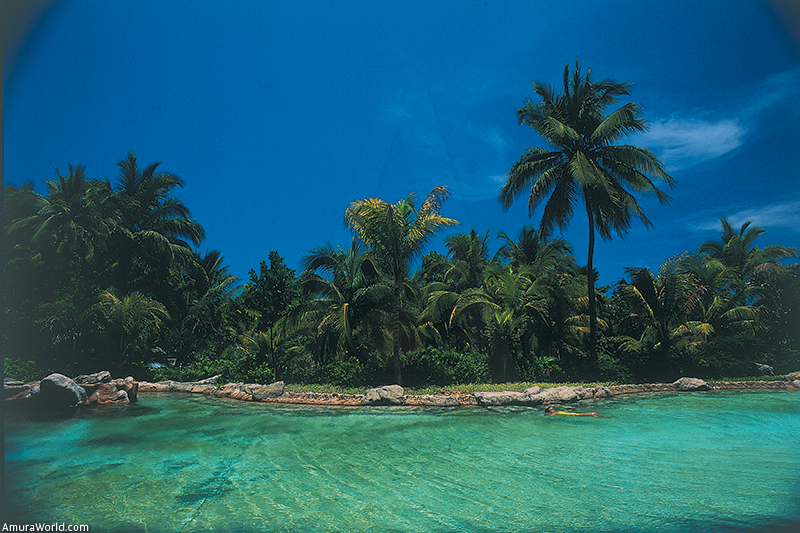 With its tropical weather and glittering sun every day, Acapulco is a beach destination of excellence.

The Dream of Owning a Yacht

If you are an shrewd sailor, a skilled fisherman or an expert underwater explorer, you are almost certainly a traveler who loves the sea, to the point of owning one of man’s most precious dreams: you own yacht.

Acapulco has the infrastructure and modern services necessary for nautical tourism, like the traditional Club de Yates (Yacht Club) and the newer Marina Internacional (International Marina). An international, cosmopolitan ambiance pervades both, and they are always filled with sailors who are either starting out on a voyage or arriving in Acapulco in their own vessel. 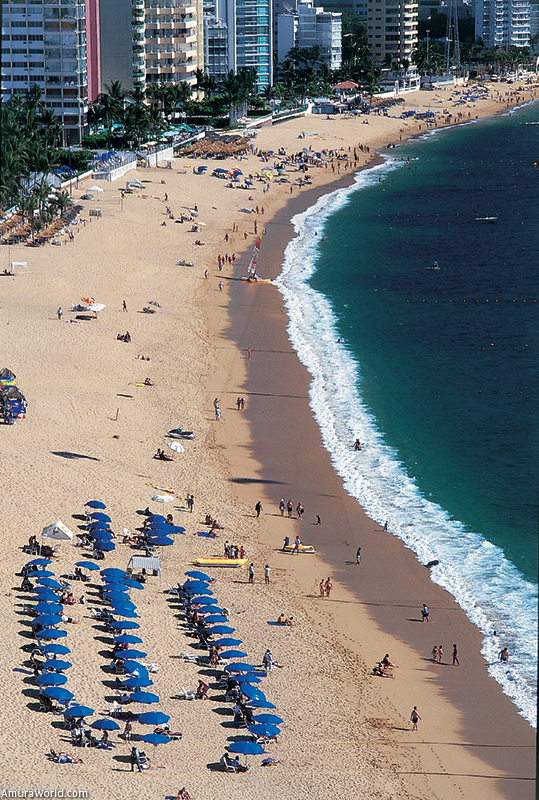 Located on Gran Tropical and Tambuco streets, in the Las Playas neighborhood, the Acapulco Yacht Club, one of the premier clubs in the world, is where the boats of movie stars, financiers and public figures lay anchor. 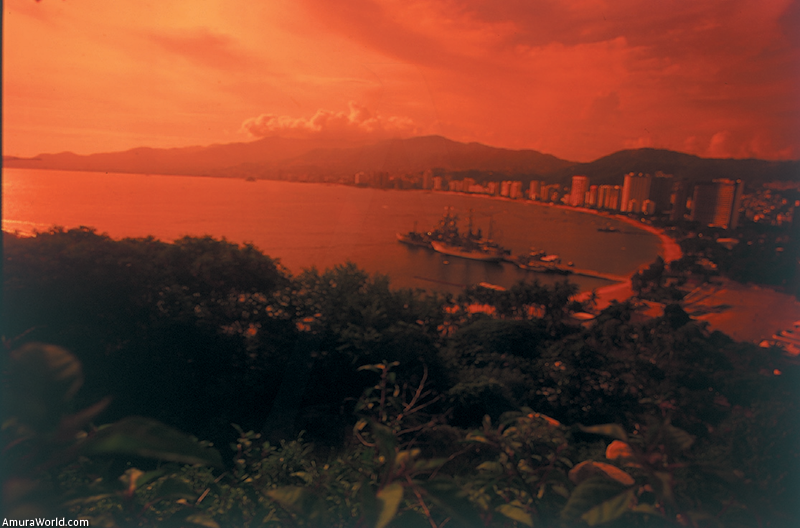 Situated on Costera Miguel Alemán boulevard, in the Las Playas area, the La Marina Nautical Tourism Development is a megaproject created to satisfy the demand for nautical services in Mexico’s most important tourist port. It is designed mainly with weekend tourists in mind.

Among its services and attractions is the Yacht Club, a center that promotes activities in an exclusive, family setting. It is staffed by instructors specialized in different areas of nautical activities.

The Marina offers slips for 332 boats, ranging from 36 to 150 feet, floating marinas featuring cutting-edge design and advanced technology, as well as unequaled security.

The condominiums, which are Mediterranean and Mexican colonial style, are set around expansive gardens with swimming pools and areas for relaxing, as well as direct access to the Marina.  Strict security measures are in place and there is a beautiful beach as well as paddle tennis courts. 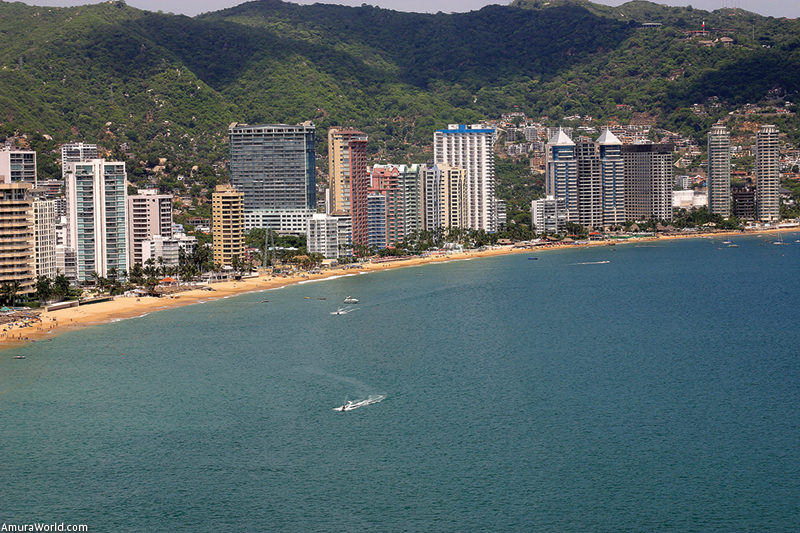 Furthermore, Acapulco is the second largest port in Mexico and is the point of departure for the most famous cruise liners in the world. Every year it welcomes an average of 110 cruise ships carrying a total of about 187,477 passengers.  Some routes cross the Panama Canal on their way to the Caribbean, while others sail north, stopping in Los Angeles, California, or continue on to ports even further away.

There is Lots to Do in Acapulco

In spite of the fact that Acapulco is a place that is tempting for simply relaxing and spending hours on the beach sunbathing, days on the bay are filled with activity.  Everything in Acapulco is worth seeing and doing, and there is a wide range of activities that will keep you entertained 24 hours a day.

In the morning there are a number of options to choose from: swimming at one of the more popular beaches, getting a tan water skiing or jet skiing, or skiing on one of the lagoons, like Coyuca, Pie de la Cuesta or Tres Palos.  Those who seek stronger waves for surfing will want to head over to Bonfil and Revolcadero.  Catamarans, windsurfing, bungee jumping, and parachute rides complete Acapulco’s water sports attractions.  Fishing is always an unforgettable experience in Acapulco.  A short distance from the mouth of the bay you’ll find a number of species, especially large sailfish, as well as others that call these waters home, including dorado, red snapper, marlin and shark. 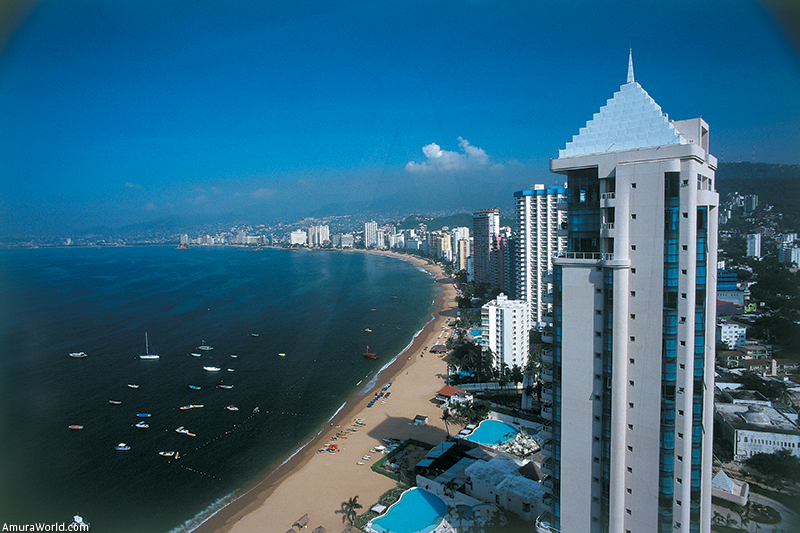 Both La Marina and Club de Yates organize fishing trips on the high seas, in motorboats or yachts, in search of a prized trophy.

In the waters of Santa Lucía bay the experiences underwater are just as exciting as those on the surface.  Scuba divers can visit the Virgin of the Seas, located off La Roqueta Island or the Río de la Plata, a ship that sank in 1944 off Icacos beach.

Another of Acapulco’s enchantments is the opportunity to experience the world of spas. There are some fabulous facilities for relaxing and keeping in shape.  The major spas are located both the luxury hotels and in town.  They include Alory Spa, Care-Spa, Diseño Facial Spa, a spa in the Radisson Resort Acapulco, Spa Miguett, Spa Willow Stream and one in Villa Vera & Racquet Club

The ecotourism takes place in Coyuca and Tres Palos, where one can watch different water bird species in their natural habitat.

In the afternoon, there is La Quebrada, with its famous divers and, not far away, the Sinfonía del Mar amphitheater, for watching the sunset. Another option is the San Diego Fort, where you can learn something about Acapulco’s history and its importance during the era of New Spain.  It was one of the key points on the commercial route between America and the Far East. 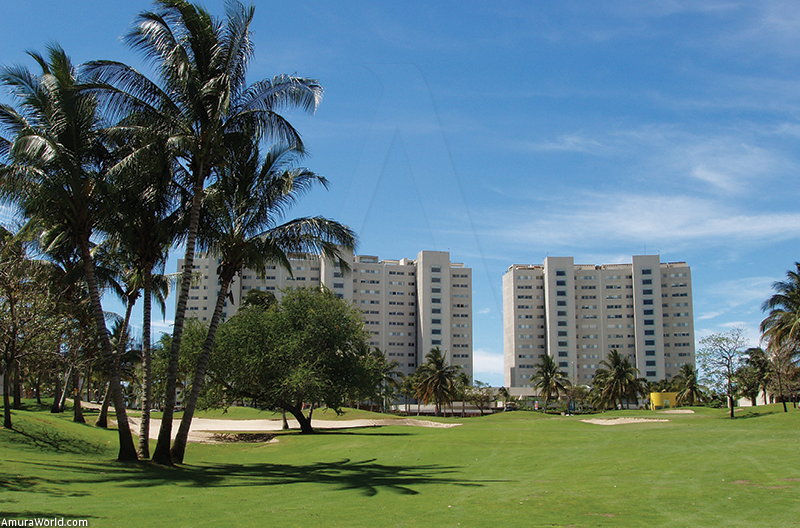 A Destination that Offers almost Every Sport Imaginable

Acapulco is world renowned for its water sports, deluxe hotels, fantastic discos, and enchanting settings.  But today it is also renowned as a premier golf destination.  There are five, 18-hole golf courses located in hotels and prestigious residential developments, like Tres Vidas, Hotel Fairmont Acapulco Princess, Hotel Fairmont Pierre Marqués, and Hotel Mayan Palace.  Each features the latest in diversity and challenges, and each course has special characteristics to offer golfers.  Additionally, there is the nine-hole Acapulco Golf Club, located next to the Conventions Center.

This port is also an excellent option for those who play any sport, including tennis.  Visitors who want to improve their game can choose among approximately 50 courts.  In fact, Acapulco has been the site of the Mexican Open since 2001.

Acapulco is an exciting destination for travelers looking for new experiences.  If you enjoy navigating rapids, the Papagayo River is close by. There you can practice rappel, rafting and kayaking, as well as ride on the Shotover Turbo Jet.  To really pump up your adrenaline, there is bungee jumping and the sky coaster, or if you prefer even greater heights, there are ultra-light flights that put Acapuco at your feet. 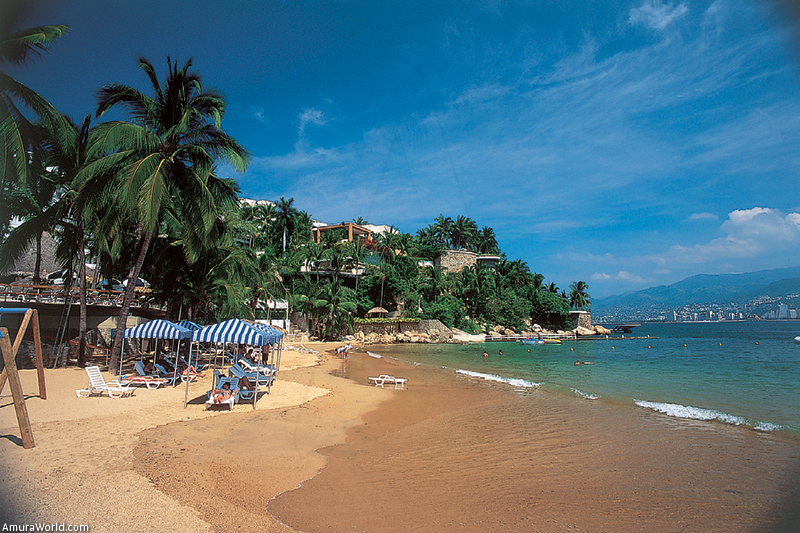 Acapulco’s setting was one of its first attractions and ecology-minded tourists can see many species of aquatic birds in their natural habitats in the Coyuca and Tres Palos lagoons.  For those who prefer exercise and observing plant life, we recommend walking along the paths of La Roqueta island.  Furthermore, El Valadero Park, which practically surrounds Acapulco, was decreed a national park in order to improve its ecological environment and to preserve its historic and anthropological importance.

But there is absolutely no doubt that Acapulco’s charm starts with its golden sand beaches (more than 18 km of them), warm waters and exotic palm trees, which constitute some of the resort’s main attractions.

Visitors can enjoy the traditional beaches (listed from west to the east): Caleta and Caletilla, La Roqueta, Hornos, Papagayo, La Condesa, Icacos, Puerto Marqués, Revolcadero and the virgin beaches of La Bonfil and Barra Vieja, located after the airport, and accessible via a coastal highway. 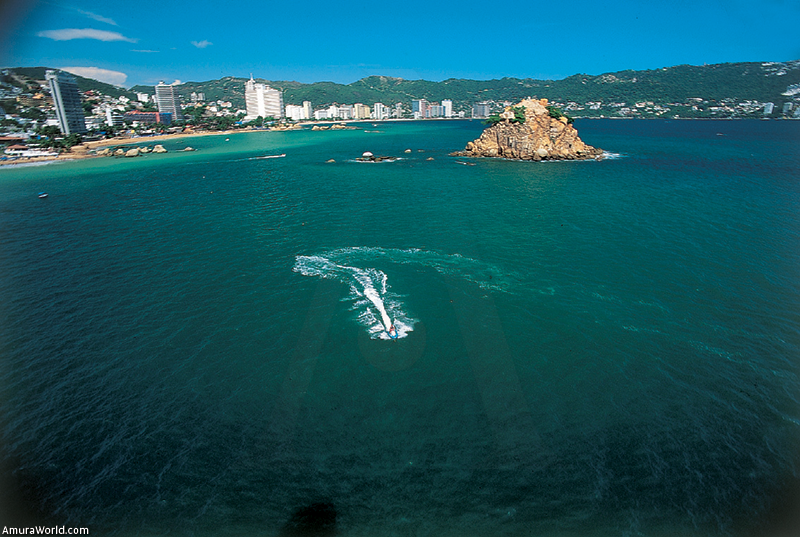 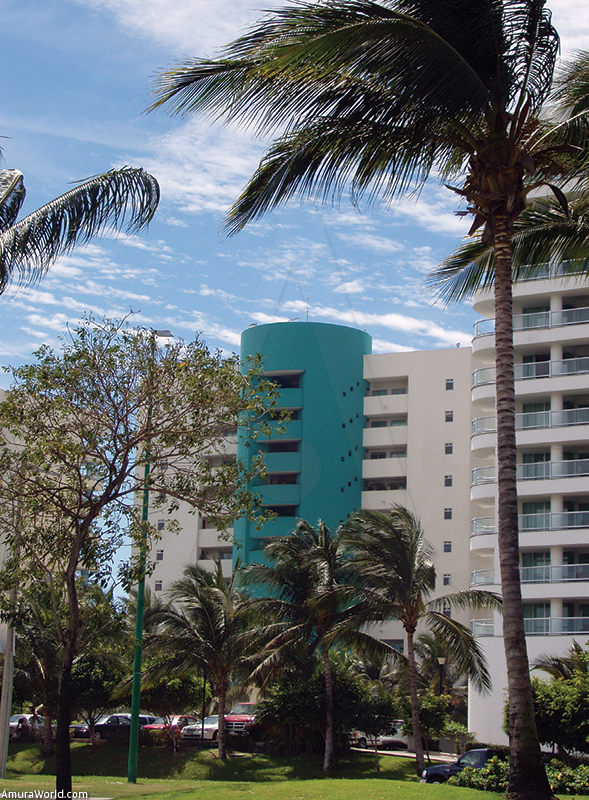 Nightlife begins when the coastline shines by the marquees and begins two fill up with people determined to have fun.

Acapulco’s solid infrastructure is the product of more than 40 years of catering to domestic and international tourism.  On more than 62 kilometers of beach you find 238 hotels and other lodging facilities that offer 18,132 rooms for all tastes and budgets. There are also 93 quality restaurants, six shopping centers, a bullfighting ring, conventions center, five 18-hole golf courses and services for fishing and water sports, all of which contribute to making this destination attractive both for tourists and investors.

Lovers of fine dining are welcomed in style.  Acapulco offers its visitors a wide gamut of excellent restaurants to satisfy the most demanding palates. Whatever you crave, Acapulco’s culinary offerings will leave you more than satisfied. 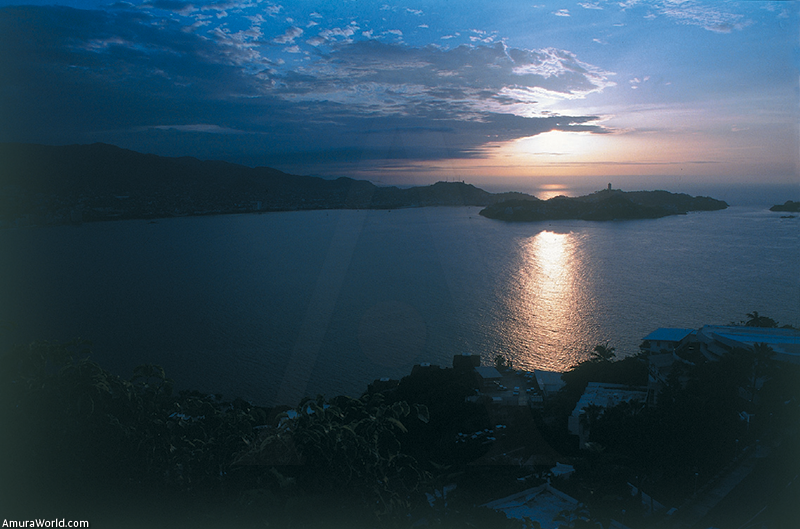 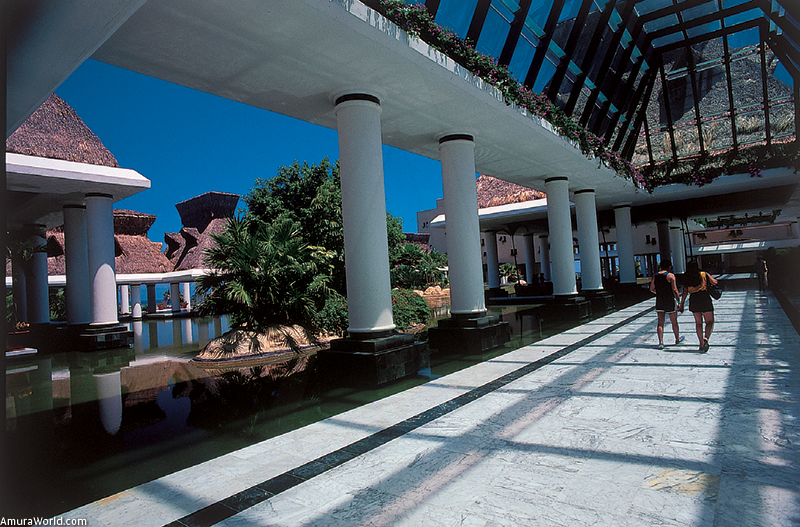 Shopping centers, boutiques and markets make it almost impossible to return home without buying a present or a souvenir.  There they are, just inviting us to spend our money: La Gran Plaza, La Vista, Oceanic 2000, Plaza Bahía and Plaza Marbella, filled with boutiques and exclusive shops, as well as the Sergio Bustamante gallery. Not only days filled with activity, the nights are, as well.  Acapulco never sleeps.  Nightlife begins when the lights on the Costera begin to sparkle and it fills up with people looking for a good time.

To begin with, there is the beauty of the setting, the impressive view of the bay with its lights twinkling      in the darkness. Then the action begins!  The sounds of the night are a mixture of the different kinds of music coming from the countless bars and restaurants: B&B, the legendary Bab­y’O, El Ale­bri­je, Hard Rock Ca­fé, Man­gos, Mi­le­nium, Pla­net Holly­wood, Baikal, Kookaburra, Madeiras, Bellavista, El Olvido, La Vela, El Faro, Spicey, Casanova y Zucca. 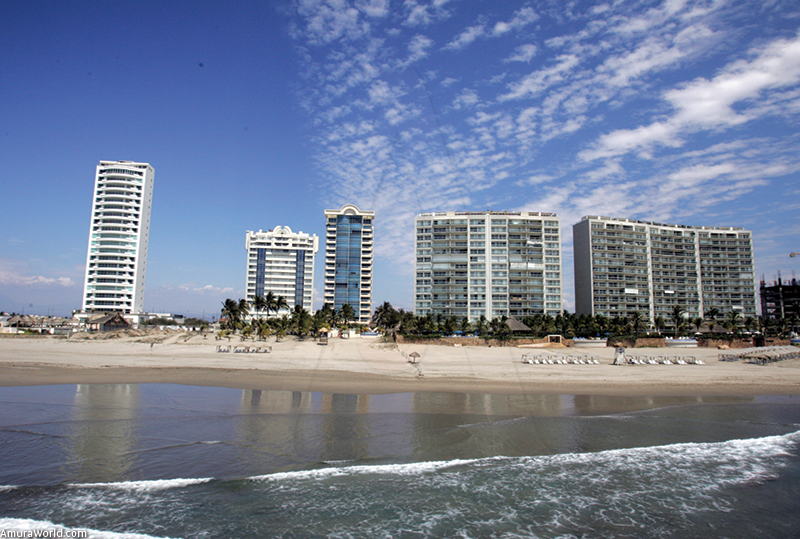 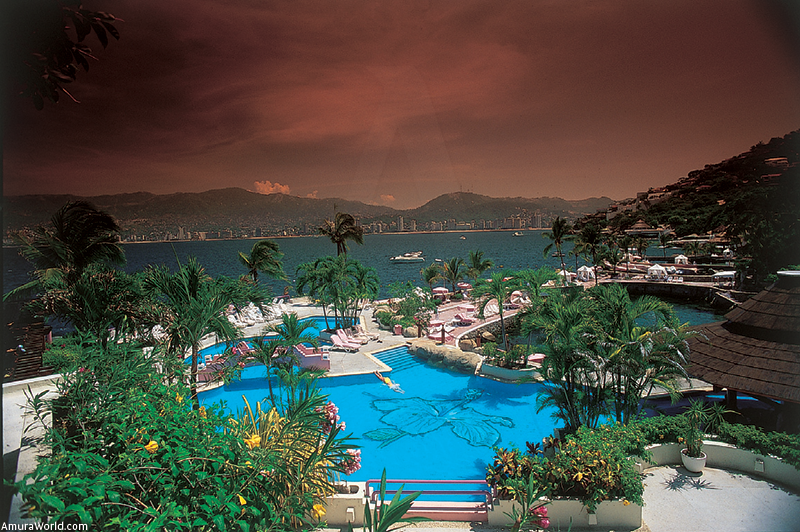 Tying the Knot in Acapulco

Lately, it has become very fashionable to get married in Acapulco.  Couples who tie the knot here throw elegant parties in fabulous settings. There is an infinite number of possibilities to choose from for banquets, décor, ambiance, special hotel packages, etc.  The settings for these events, for obvious reasons, cannot be surpassed because they take place in hotels, beaches, places with incredible views or in ballrooms on the sea. Nothing, absolutely nothing is more romantic…

Acapulco is one of the destinations of choice of honeymooners because of its incomparable beauty and because it is less expensive than other places.  But money is just part of it.  The great attraction is the ambiance, the landscapes, the sun and the fabulous nightlife, making it a perfect setting for couples.  A magical combination of incredible beauty and a hypnotic ambiance makes Acapulco the ideal spot for lovers. 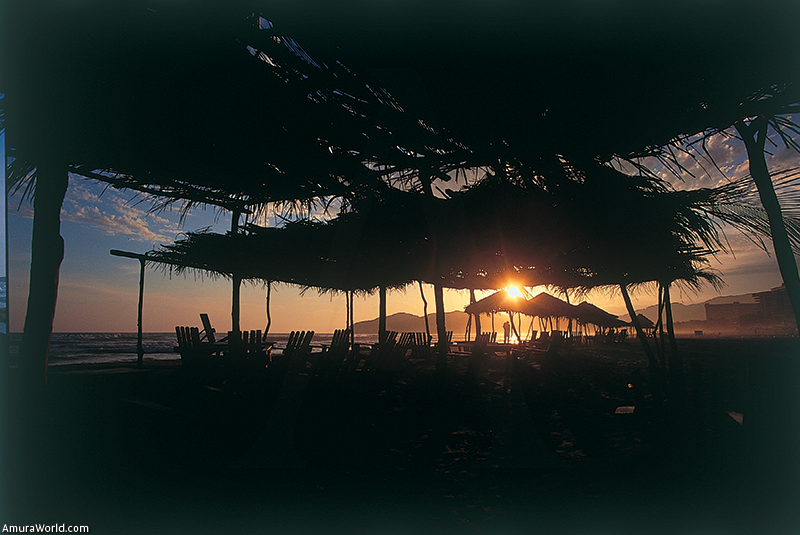