Madrid, 5 nights of feast and culture

Great capital city with a flavor of an Andalusian village, Galician or Asturian style crowd, locked between both Castile, Madrid is a gem worth discovering in the smallest corners. Madrid is a jumble of flamenco and Jack, an adventure of parties and bars, a stew of cultures and a meeting of aromas to Spain. Madrid is unique and always welcomes us with the color of scorched earth in the South and its forests at the foot of the Sierra Norte, in the heart of Spain, as the queen of the Spanish variety. 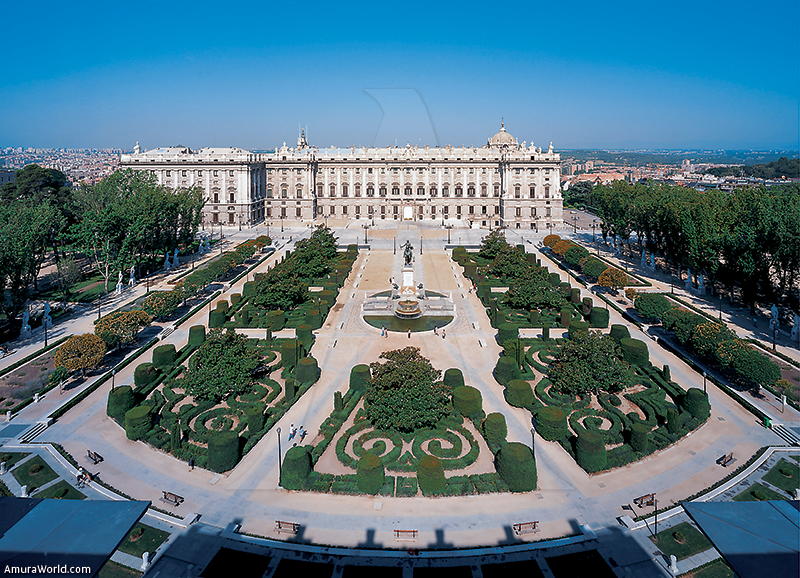 We walked through the Gran Vía, this famous avenue was built between 1910 and 1930 enclosed by beautiful buildings and vibrating city with its theaters and restaurants. We stopped at the famous El Tigre, a tapas bar and rods (street Infantas 30) and we tasted the hell sausage, baked potatoes, croquettes, tortilla, and serrano ham. The atmosphere of loud voices, laughter and shoving, the smell of sausage and paella filled the place, a real immersion in the authentic Madrid. We passed through Cibeles Square to admire the beautiful fountain that was built in 1782 and represents the goddess Cybele, the symbol of the land, agriculture and fertility, on a chariot pulled by lions, a monument that reigns over the square bounded by the elegant buildings of the Palace of Buenavista, Linares Palace, Palace of Communications and Bank of Spain.

We continued to the Paseo del Prado and visited the Thyssen-Bornemisza to admire Museum’s permanent collection, in a tour through the art from the thirteenth century until the late twentieth century, with a thousand works as part of the exhibition. 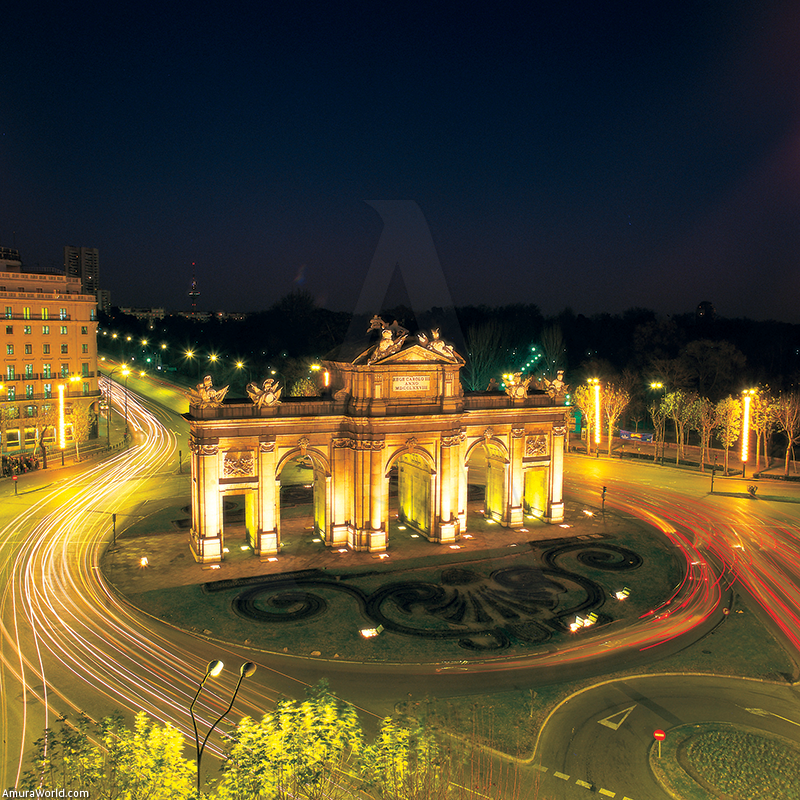 We went through the majestic Alcalá Gate, built by Carlos III in the place where there was an open door in the wall. This triumphal arch was completed in 1778 the style of a Roman triumphal arch is a monument emblematic of Madrid. Then went back to wandering the streets, discovering the shops on Gran Vía, crossing the Fnac to buy books and records, and arrive on time at the Teatro Real in the Plaza East, opposite the Royal Palace where we enjoyed a fabulous presentation of Puccini’s Tosca. After having been closed a long time, it has been adorned with a superb restoration between 1991 and 1997, and still bearing its original decorated Italian style in 1850.

We leave the theater as if we were floating within the music and went straight to dinner at Lhardy. This renowned restaurant opened in 1839 by Emilio Huguenin. After 172 years of good cooking, Lhardy keeps on indulging its guests.

Finally we took a stroll through the neighborhood of Chueca where the environment is overflowing in the streets, the bars fill those still late at night. It appears that the district never sleeps and it was 3 am when we returned to the hotel, fairly exhausted. 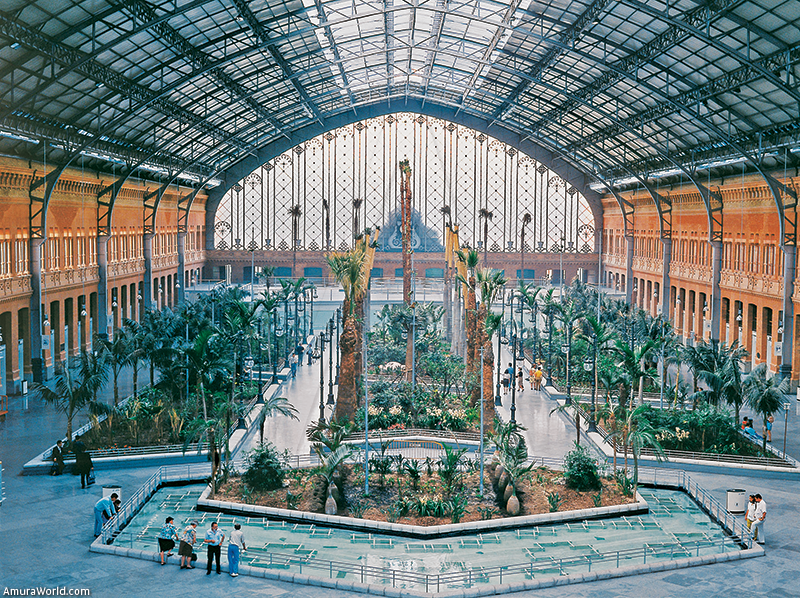 We had breakfast at one of the bars of Callao, some churros and clubs with a traditional latte, then we went to the Monastery of the Royals Barefoot, monastery of Clarisse Discalced Franciscans, founded in 1559 by Juana de Austria. The monastery housed inside superb works of art that can be discovered and faculty known for its arches and tapestries as the main staircase looks a fabulous paintings. We passed the church of San Ginés de Arles, where the Chapel of the Holy Christ of Redemption and its dome adorned with frescoes by José Sanchez Villamandos.

Continuing our way through the streets, we find the Palacio del Marqués de Gaviria, which opened in 1851 with lavish rooms, the Church of Our Lady of Carmen, the Royal Customs House, the church of the Calatravas from the 17th century, and the Palace of the Marquis of Miraflores. We passed the famous Puerta del Sol adorned by the legendary Tio Pepe ad, the statue of the Bear and the Strawberry Tree, the Royal Mail house that bears the clock strikes 12 bells of the new year, Casa Diego that sells the best fans since 1858 and the equestrian statue of Carlos III.

We continue our walk down to the Pasa street, admiring the old buildings that adorn the course: the Madrid City Council, the Archbishop’s Palace, the church of San Miguel Pontificia, Palace of the Cord, and the Palace House of Count de Miranda.

In the evening we dined on the terrace of the Casino to sample the cuisine of Ferran Adria and Paco Roncero as gastronomic consultant and enjoy the best wines recommended by Maria Jose Huertas, the best Spanish sommelier in 2005. After dinner we walk again by the lively Chueca neighborhood and environment of bars, tapas, cocktail lounges, and people talking in the streets. 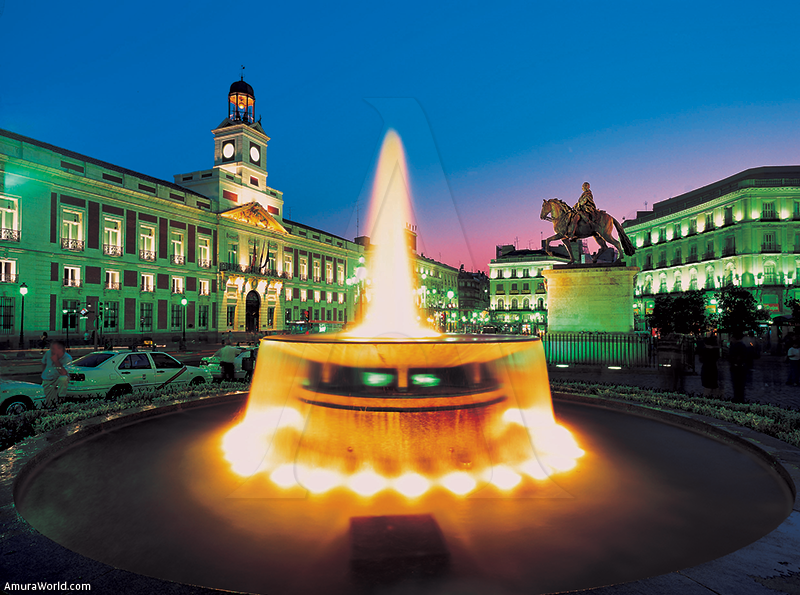 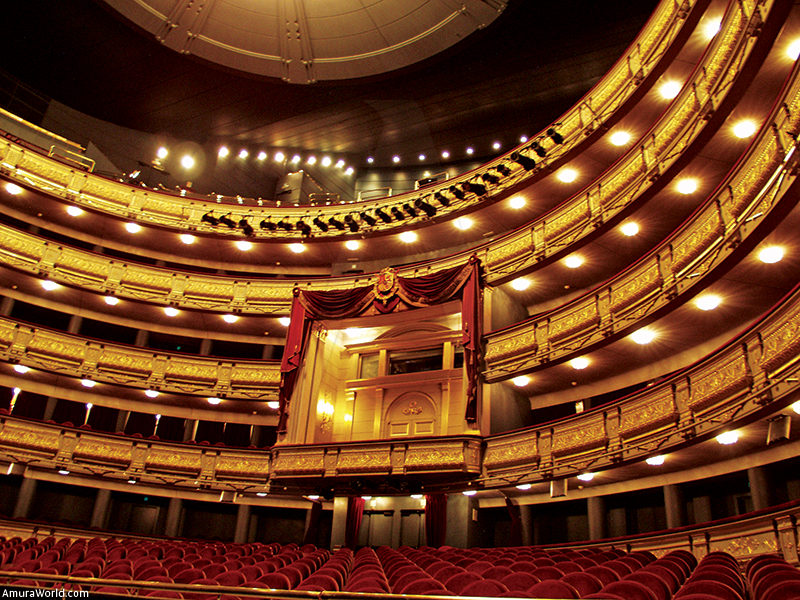 We walked directly to the Royal Palace to visit early, discovering the sumptuous palace where Queen stood the palace of the Muslims. After admiring the facades with windows, balconies and pillars, we find the central courtyard and finally some of the 30 main rooms: the Throne Room with its vaulted ceiling painted by Tiepolo in 1766, its gilded carved furniture from the time of Carlos III , the bronze lions that flank the canopy of the throne, the King’s Chamber, the Porcelain Room created by the factory Buen Retiro, the Hall of Mirrors with its huge mirrors, the Hall of Gala and galleries that exhibit the paintings of great painters such as Juan de Flanders, Caravaggio, Velasquez and Goya. We ended our visit to the Campo Moro and gardens of the Palace and the Royal Armory which retains an impressive collection of weapons and armory.

We walked the streets where many good restaurants can be found, we visited the parish of Santiago and San Juan (Plaza de Santiago), the two oldest parishes in Madrid in a building dating from 1814.

We took a taxi to the Museo Sorolla, the great painter from Valencia, who achieved great popularity with his paintings and portraits costumbritas. The museum is housed in his home and visit their studios and rooms to admire some of his most famous works as the portrait of his wife and children, Moro with oranges, Seville’s Alcazar, Cathedral of Burgos, La Siesta and Violetera.

After our visit, we went to eat at one of the most famous restaurants in Madrid, Ramón Freixa Madrid, to taste the cuisine of the avant-garde Catalan chef.

With a body full of the tastes and smells of this magnificent kitchen, we entered to the Reina Sofia museum through the Nouvel building to discover a large space dedicated to contemporary art: works by Dali, Miro, Picasso, Oskar Schelemmer, Juan Gris and temporary exhibition Maja Bajevic with poetic review of historical and social fractures.

Then we went to Santceloni to taste the award-winning cuisine of Chef Óscar Velasco that adheres to the legacy of Santi Santamaría, who created the restaurant Can Fabes and wrote several books.

To end the night and experience the beauty of the city celebration, we went to Kapital, the famous seven-story nightclub with various types of music and a fabulous atmosphere. 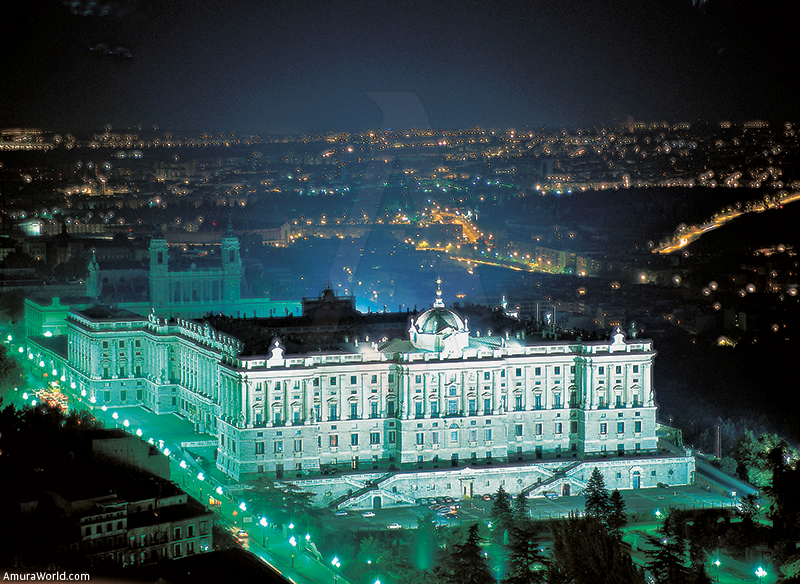 We took a drive early in the morning and headed to Alcala de Henares, 31 km from Madrid, famous for its university that we visited upon arriving, flaunting its beautiful patios and halls, especially the room where the Cervantes awards are presented annually. The Gothic Magistral church surprised us with its beauty and elegance. We found the birthplace of Miguel de Cervantes, from the XVI century, a typical Spanish house of the Golden Age, the Comedy Corral de Alcalá (one of the oldest theaters in Europe built in 1601), the Hospital of Antezana, the Mansion- Hotel Laredo, currently Cisneriana Museum, where we admire an original edition of the Complutense Bible, The Bible of Antwerp. The village has its elegant buildings and gardens as the remains of the ancient Roman city and the city Complutum Arabic as the wall.

We visited the Church of Our Lady of the Assumption that dominates the square, a mixture of Gothic, plateresque, Renaissance and Baroque altarpiece which houses a great shining in its center the picture of the Assumption of the Virgin painted by Francisco Goya in 1812. We found the height Clock Tower, the castle of the Counts, the convent of Poor Clares cloister with two floors, the chapel of San Anton, and the baroque church of San Roque.

Finally we arrived in time to visit the palace of Aranjuez, this charming town crossed by the Tagus and Jarama rivers. Inside we discovered its beautiful rooms and impressive collection of paintings, and especially seduced us with the exotic décor of the Chinese Room, the Porcelain Cabinet and the Hall of Mirrors. The collection of dresses of queens is beautiful as well as the collection of carriages.

Later we settled to dinner at the famous restaurant The Green Frog, the most famous of the shire. Early evening we returned to Madrid to take a walk around the bars and take the last glasses: Mouth of the Wolf, Cardamom Cock, Aeria Chill Out Chillout-decorated with arabic and a very nice music, Honky Tonk Café with its relaxing atmosphere, The Confidential is an old mansion renovated in A glamorous bar, and we ended up at The Plaza Jazz Club. 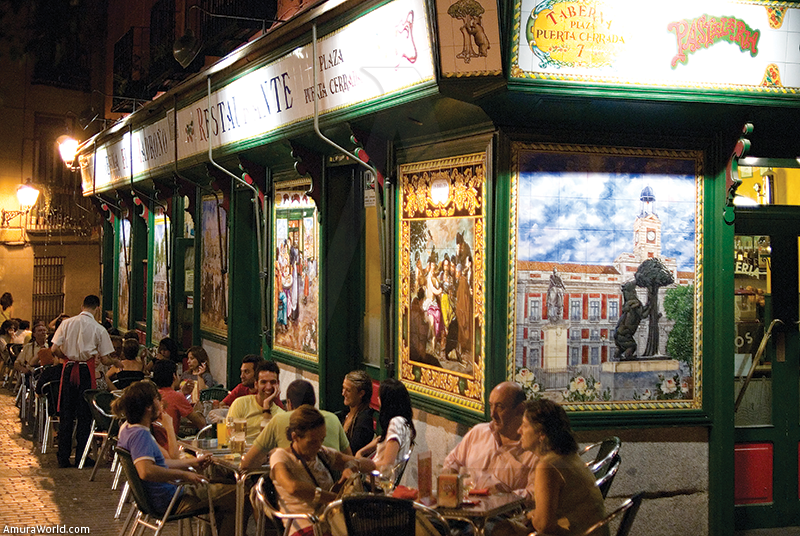 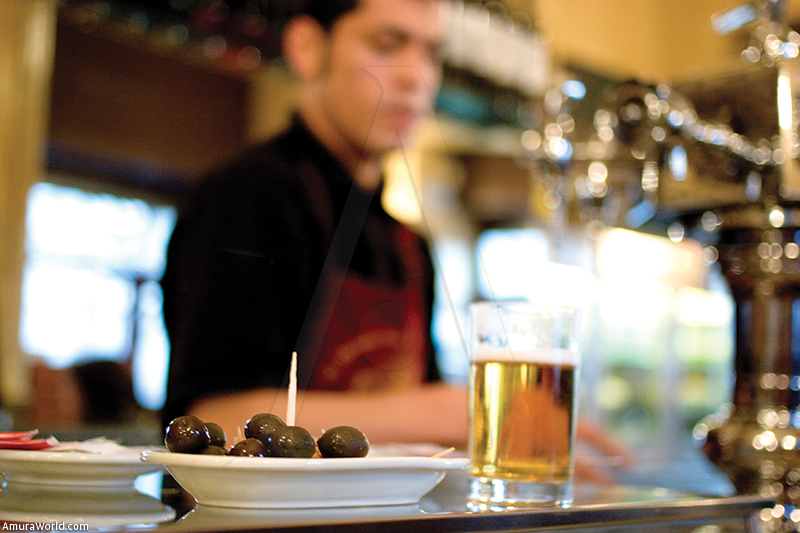 After breakfast that included clubs with a latte, we set out on a long visit to the Prado Museum where we spent all morning with the great works of Spanish painting and internationally.

We continued with a visit to the stunning glass gallery of Palacio de Cibeles and the same palace with its cultural spaces and exhibitions. We couldn’t miss the Matadero Madrid, this new contemporary art center, a former slaughterhouse turned into a cultural space, preserving its twentieth-century Madrid architecture and on present day houses several cultural activities.

We went to the Salamanca district to wander at Serrano street that sports a new look with the finest windows and wide sidewalks, a Golden Mile in the style of a fashion runway located between 19th century beautiful buildings. We found stores like Agatha Ruiz de Prada, Carolina Herrera, Chanel, Gucci, Loewe, Louis Vuitton, Miu Miu, Manolo Blahnik, Isolée store featuring different brands, the mall, as well as jewelry Rabat, Suarez, Cartier and Tiffany. To rest a bit we went to Estado Puro to enjoy tapas chef Paco Roncero that preserves the tradition of tapas and refines them.

We could not leave Madrid without seeing a zarzuela and went to see the excellent play “Vamos Verbena” Prosperity in the theater, a musical composed of fragments of zarzuela as “Water, sugar and brandy,” “La Verbena de la Paloma” “La Revoltosa” or “La Gran Vía”.

Finally we ate at Sergi Arola Madrid, one of the most prestigious chefs in Spain, where Arola invites us to discover the complexity of the sensory world and the desires of the palate. It was a pleasure thanks to the delicacy of the dishes, accompanied by a delicate Spanish wines and refined ambience.

Madrid is a true popular feast, every bite we tasted was a delicacy, each museum we visited was a gem, every street we walked is a treasure with a past, every place shines with its beautiful buildings and grounds are lovely. Madrid is well worth a long visit, well worth a Zarzuela, it satisfies the most adventurous and culture-fond people, and provokes the strongest emotions. 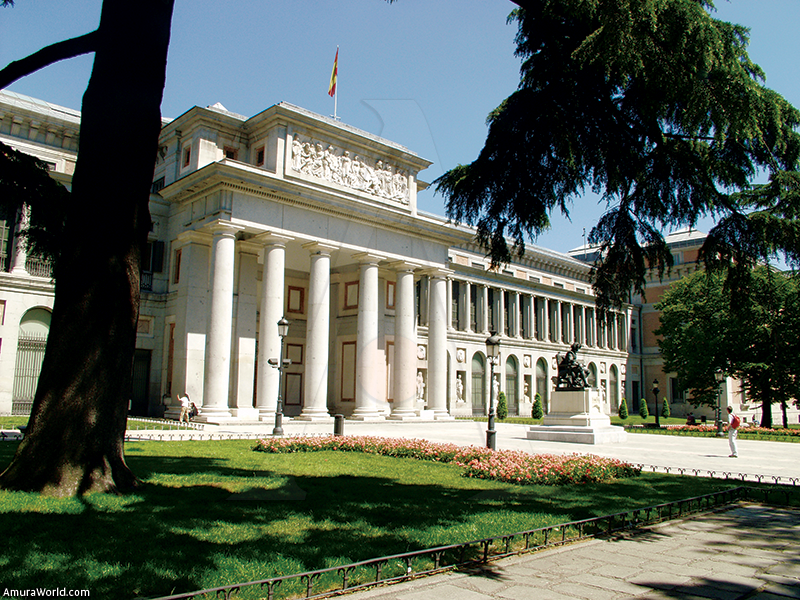 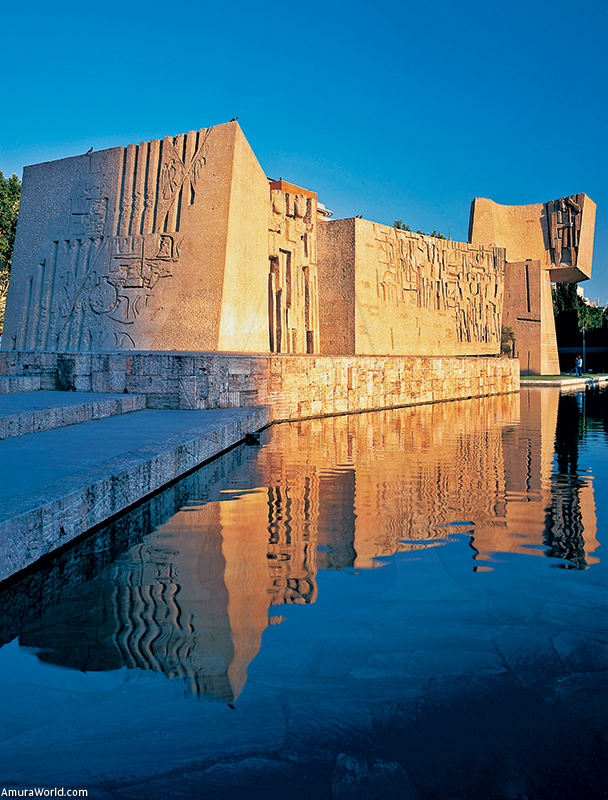 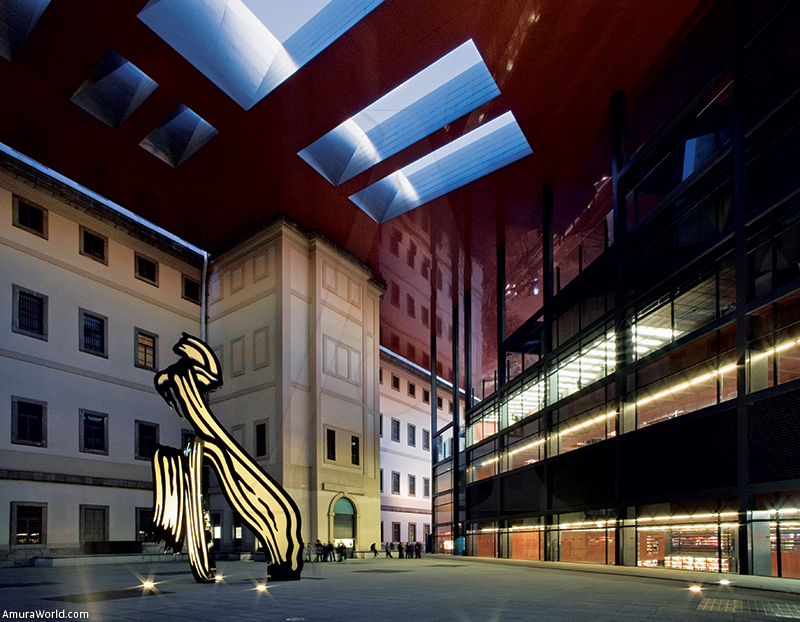 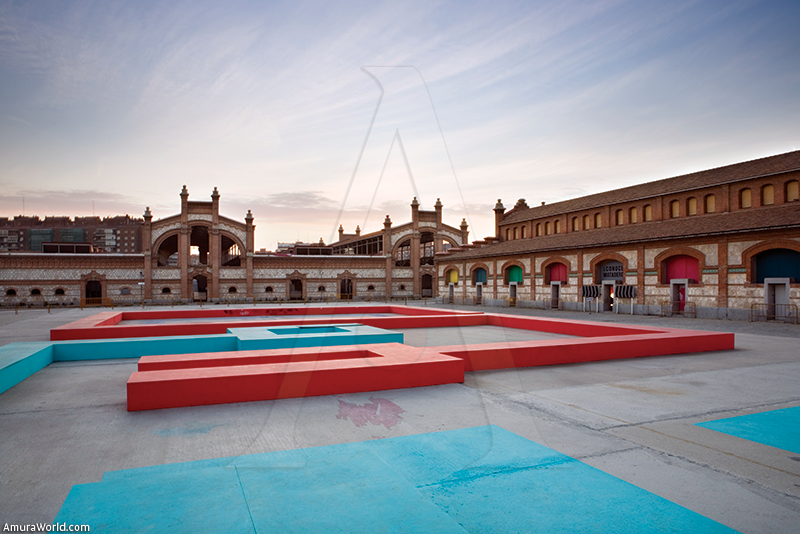