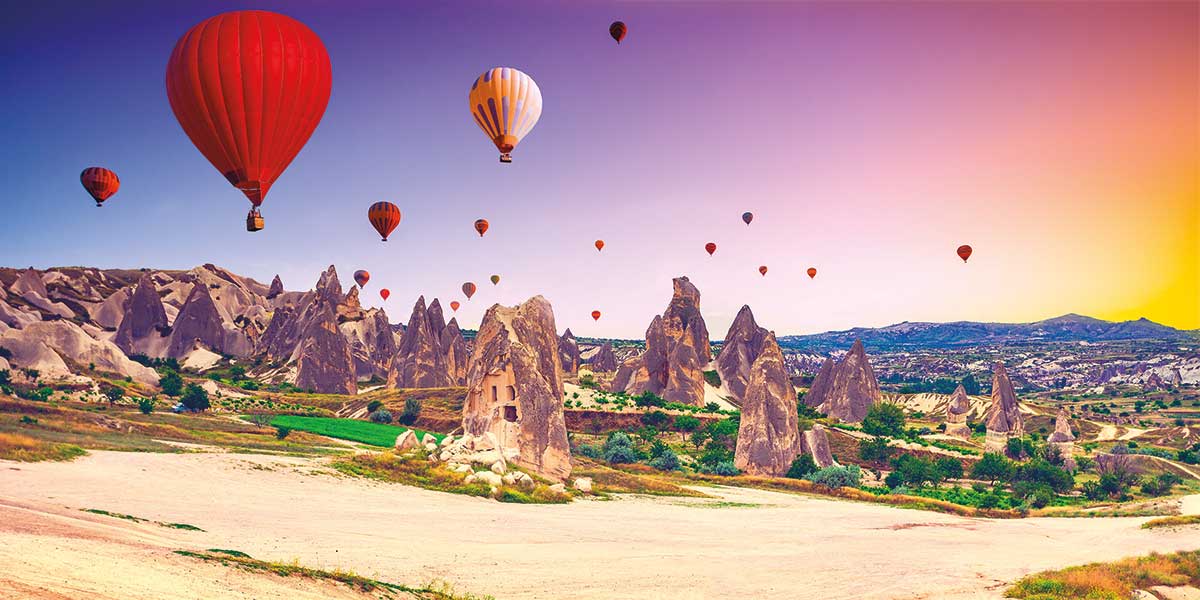 Cappadocia stand out for its sustainable legacies of millennial tradition alive, in continuity and connection with her source: the creativity original impetus that generate the survival flair.

It is part of the Central Anatolia region, also known as the Anatolian Plateau, where it is possible to visit vestiges of all the civilizations that, through the years, influenced the area.

Cappadocia is commonly described as a city, but it is made up of 36 villages, most of them underground, although some are built above ground or between both spaces. It is not a geographical but a historical entity, located in three provinces: Nevsehir, Kayseri and Aksaray.

This is one of the sites where the great civilizations converge to unfold their first steps. Vestiges have been dated from the 2nd century BC, belonging to Assyrians and Mesopotamian people (where the origins of human societies developed) who baptized the area as Katpadukya = land of beautiful horses. For these great empires this noble animal was a cardinal piece since they were used for war purposes, conquest, mobility, work animals, etc. An invaluable asset, in short.

Many civilizations fought for the dominion of the region of Anatolia to which Cappadocia belongs, so disputed by different power, but which always preserved its autonomy. Among them: Hittites, Persians, Macedonians, the Roman and Byzantine empires. 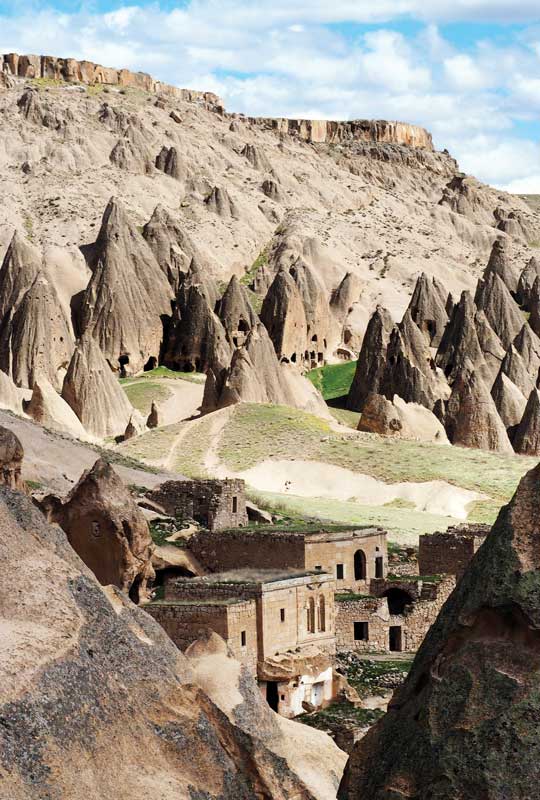 Cappadocia is visited annually by about three million people.

Classified as a natural and cultural reserve, Cappadocia is the second most important site in Turkey; it is located 300 km from the capital Ankara and 750 km from Istanbul. Visited annually by about three million people from all over the world, attracted by its enigmatic beauty and historical, geological and ethnic importance.

Its unique landscape is mainly due to the eruptions of several extinct volcanoes as Mount Erciyes (3.916 m) and Mount Hassan (3.253 m) whose view from the valleys is unforgettable. It is possible to access them by climbing or hiking. 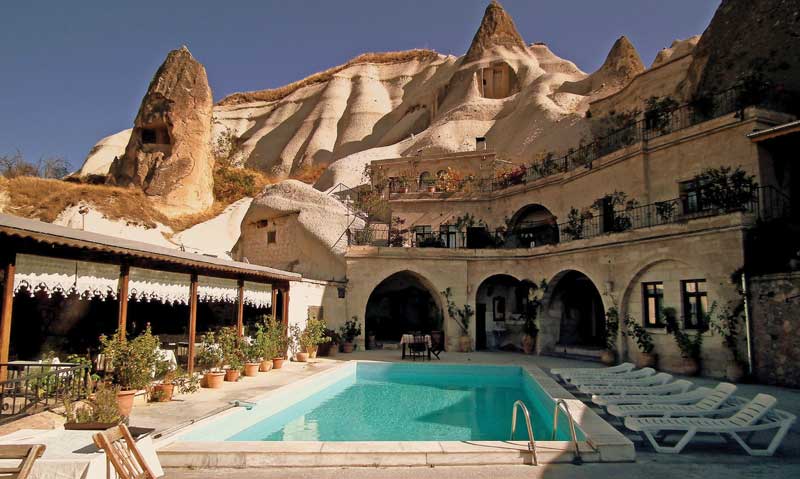 Traces of the 2nd century BC have been found.

The Pasabag valley, in the town of Uchisar, has the best fairy chimneys whose Turkish name is peribacasi. They usually end in a dome or cupola, whose hardness and stability protect the rest of the structure, formed by volcanic tuff of more fragile constitution; the mounds reach 100 to 150 m thick; the colors of their walls have been marked by different shades due to variations in temperatures and erosion.

The inhabitants found a malleable and resistant material to mold places to live and hide from conquerors or predators. They were also used to engage in spiritual practice, without adding colors or images, for centuries.

Furniture, such as tables, seats, beds or shelves, were carved into the rock walls. Some underground cities are still inhabited with absolute attachment to the conservation of the structures, in which their breeding animals or pets, and all kind of spaces for different social uses, have also been sheltered.

Its remarkable landscape was formed million years ago.

In Cappadocia various communities have been established since primitive times that managed to coexist peacefully, these people have practiced various faiths among which today predominantly Muslims.

It is mentioned that the cities could have been suitable for the inhabitants to spend several months without going outside, because they had water wells, warehouses, kitchens, farms, aqueducts, stables and everything possibly necessary.

It is believed that the communities reached up to 30.000 members. With the advent of Christianity, some of the caves suitable as churches were dressed in colors and altarpieces about biblical stories, passages from the life of Jesus, apostles and saints.

Some parts of the cities, whose buildings can have several floors, are nowadays occupied by towns, museums, mosques, restaurants and accommodation for tourists. In some areas of Cappadocia it is not possible to build anything new, only to restore what already exists. 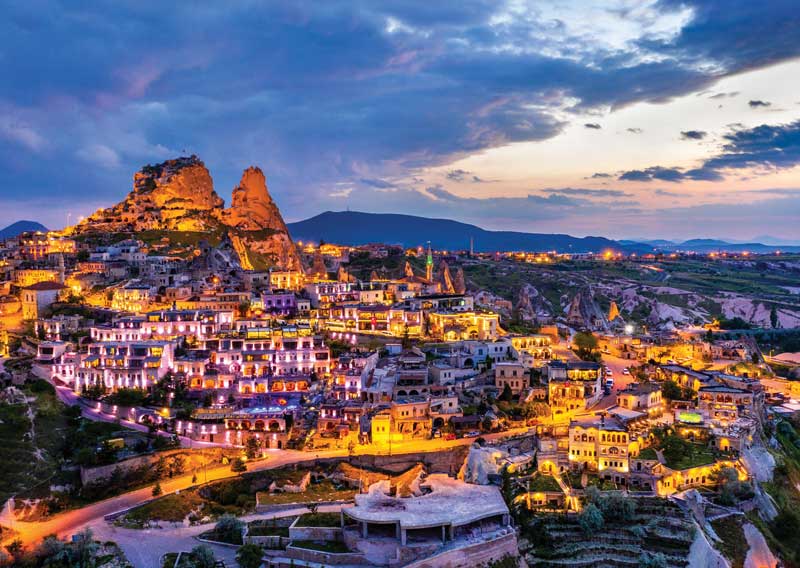 An endless journey through astonishing, landscapes. 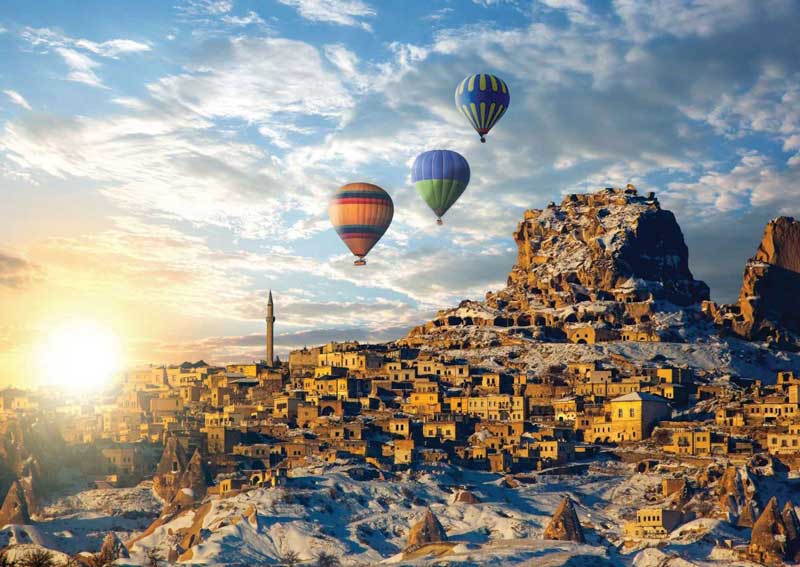 Balloons floating over Cappadocia symbolize a trip to this unique region.

It is Always a good time to travel to Cappadocia

In the summer season, the wather fluctuates between 30 ° and 45 °; in winter, temperatures drop to -5 °: different activities take place but have the same intensity in terms of experiences and the beauty of the landscapes. The high season is from May to October. Excellent choices of boutique hotels, restaurants and other establishments are available in these cities, in the very bowels of the earth.

It is common to link the visit to Cappadocia in trips from Istanbul and Ankara, but also from other destinations, as the routes are still traced in its ancient roads. A minimum stay of at least three days is recommended.

It is an important province for the history of Christianity, as the underground labyrinths sheltered devotees during the persecution of the Roman Empire. An airport in addition to its road network, connects the region to various routes. It could be said that Nevsehir contains a significant number of the sites of interest in Cappadocia:

Goreme National Park is formed by different valleys, it is the favorite place for a stay in Cappadocia because it has several advantages, such as being the epicenter from which to plan routes to all the regions. It is World Heritage Site; its distinctive landscape is compared to a lunar environment, so otherworldly that it was chosen to represent an extraterrestrial territory in the famous Star Wars saga. It has a population of 2.000 inhabitants and offers a significant tourist infrastructure. 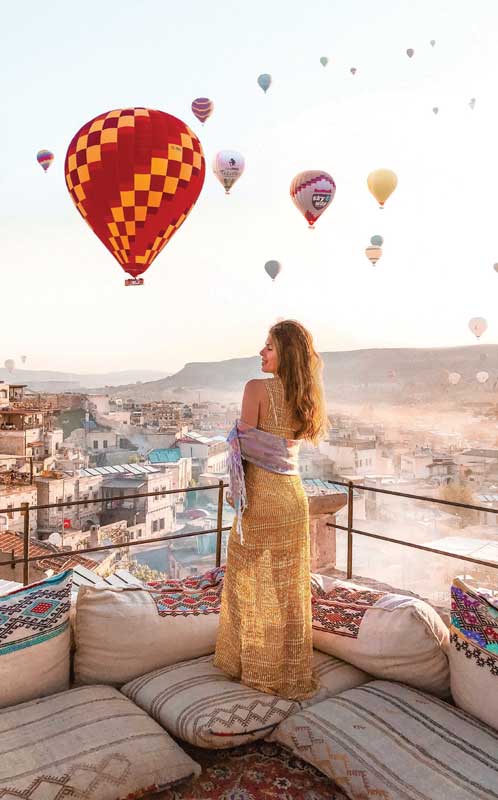 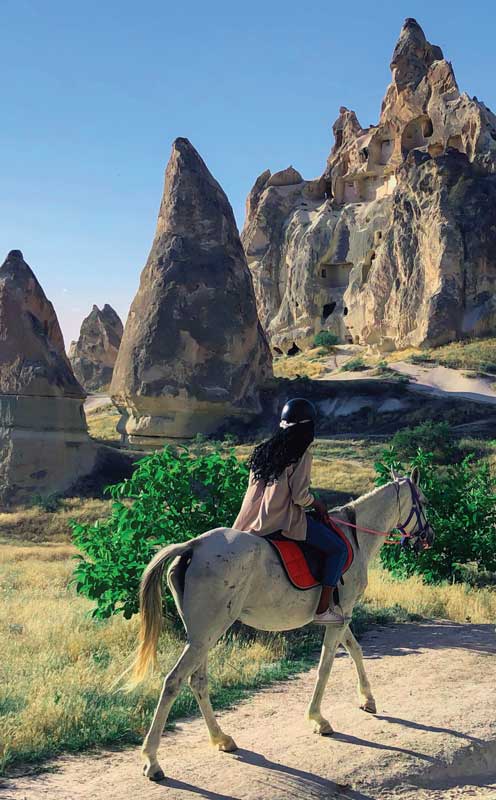 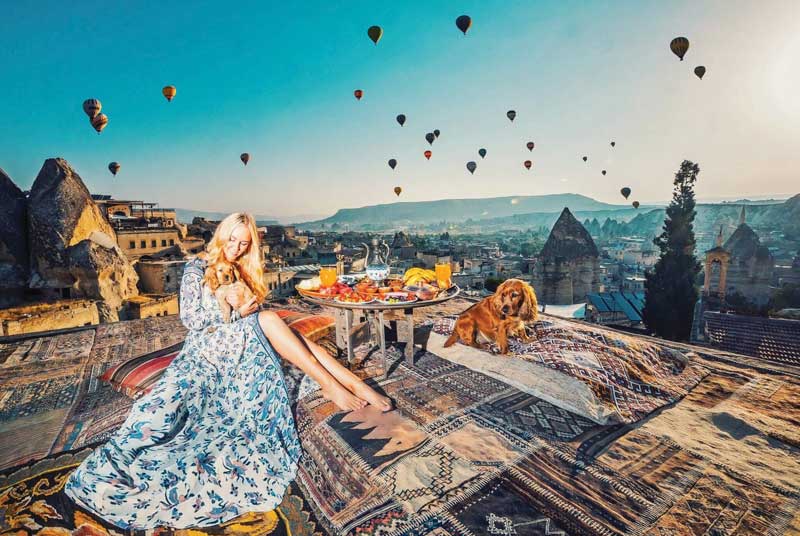 The Byzantine monastic complex has been a Christian pilgrimage site since the 17th century. It is possible to visit its extraordinary churches: the Chapel of St. Basil, the Chapel of St. Barbara (11th century), the Apple Church (12th century) with frescoes of biblical scenes; the Church of the Serpent, the Dark Church whose pictorial representations are impressive. Outside the complex is the Church of the Buckle, of singular beauty. Some of its frescoes are preserved almost unscathed.

The mounds in the valley of the imagination, resemble the figure of animals, symbolize the occurrence of some important event or evoke beautiful feelings; so some have names: dinosaur, hawk, snake head, hare, St. Simon's cell, the snail, the camel, kisses in a pact of love, etc., this is one of the obligatory itineraries. Hundreds of images shows, that it is not really necessary so much imagination, to distinguish the forms that are captured in them.

Located near Goreme, the Valley of Love is part of an unmissable tracking circuit when you visiting Cappadocia. Its rock formations have a clear and special delineation, towering skyward in towers of up to 50 m.

Pottery from the town of Avanos

It is recognized for its carpets and handicrafts, and for being the place where the art of Turkish pottery was created, whose source dates to the Bronze Age. Avanos is divided by the course of the Red River, one of Turkey’s most important tributaries. Red clay is the material used by the potters to make their renowned pieces. The pottery workshops are its main tourist attraction.

The balloons of Cappadocia

It is undeniable that the balloons floating over Cappadocia symbolize a trip to this unique region of the world. It is practically impossible to find a space where they are not present. Around 100 balloons, each with 20 people on board, can be observed daily, which begin to rise and float at dawn to take advantage of winds suitable for this purpose.

The balloons move at the same speed, staying at the same height; otherwise, it could be very dangerous. The pilots from a restricted community of authorized companies, specialized and dedicated to ensure the safety of visitors who have turned this activity an icon. 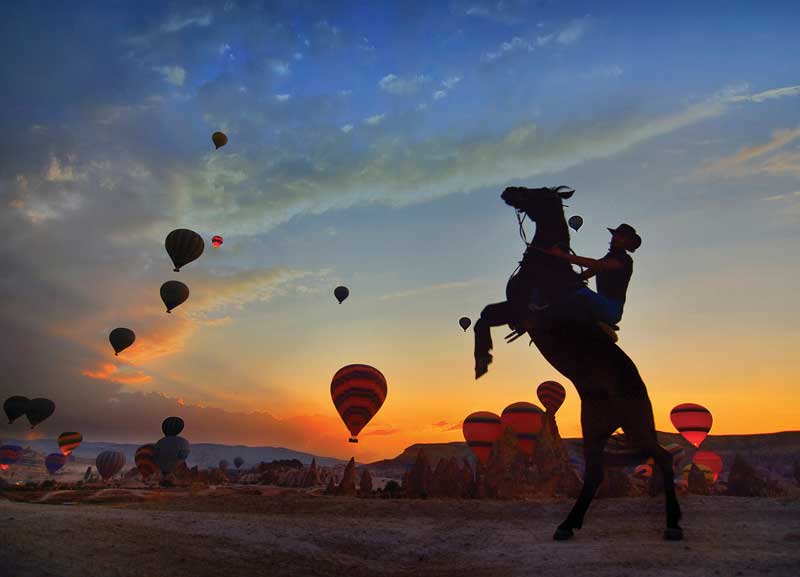 Hike and ride through the Fairy Chimneys in Cappadocia. 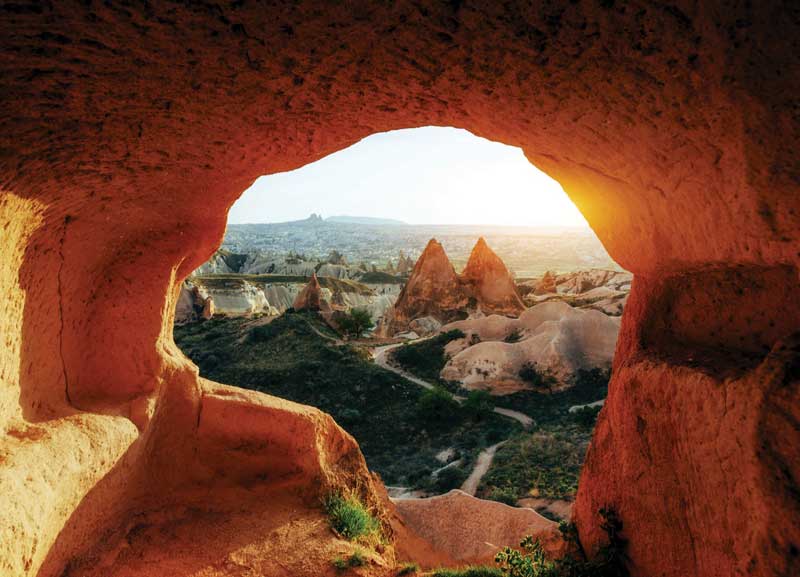 Hike and ride through the Fairy Chimneys in Cappadocia.

The four upper levels of the city of Kaymakli, which is made up of eight underground floors, remain open to the public, the city is noted as the oldest in the region, discovered in the 1960s.

Also known as Caravansary, they were built along the Silk Road, from the 13th century onwards, to be used by traders or travelers on the way from China to Turkey, on the route through Central Asia and Iran. Caravanserai means "travelers’ palace". Their ancestral buildings competed in beauty and in offering the best attention, as is done in modern hotels. In Cappadocia there are some examples of these buildings, such as the Sultanhani Caravanserai Akseray, Akzikarajan Caravanserai and Saruhan Caravanserai.

Ebru is a traditional Turkish collective art, considered Intangible Heritage of Humanity. It is passed down from generation to generation. It consists of creating multicolored prints, pouring, drop after drop, pigments and natural solvents on a wet surface, to create the image that is drawn meticulously, and then transferred, almost magically, to the “Turkish paper”. This is how it is commonly known in the West.

Music from ancient, handcrafted instruments such as the Barbuca. The buildings and churches of Cappadocia offer a special and diverse acoustics, ideal for rehearsing, acting or even recording beautiful melodies. The secrets of the region’s pottery, among other traditional arts, are passed down from generation to generation.

Travel the vineyard route and taste the legendary Cappadocia wine. Those in search of outdoor adventure to enjoy the nature of the different Cappadocian landscapes, could ride camels, horses or take an ATV or Quad, considered the perfect vehicle to traverse the rugged terrain. It is a delight to taste its diverse and exquisite gastronomic offer. 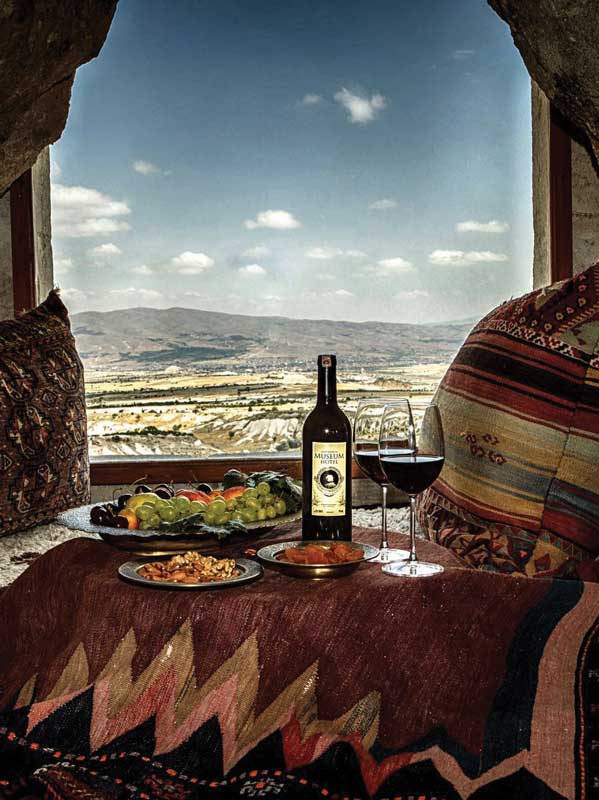 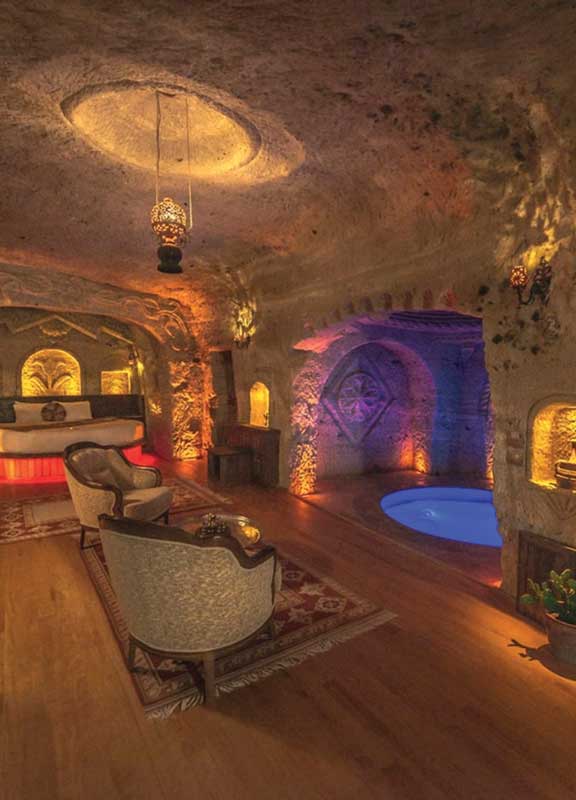 It is another of the provinces of the Cappadocia regions that also has its own airport, it is in the center of this historical territory; its city was founded in the 2nd century BC. The citadel was built in the 4th century, and among its sites of interest in the Hunat Hatun Mosque.

Is one of the most important cities in the historical region of Cappadocia, it has been inhabited since 6000 BC.

In Cappadocia many of the pieces of Turkish handicrafts are produced, it is possible to know and buy them on a walk through the bazaars with their famous textiles and ceramics. Antique and jewelry stores are also abundant. 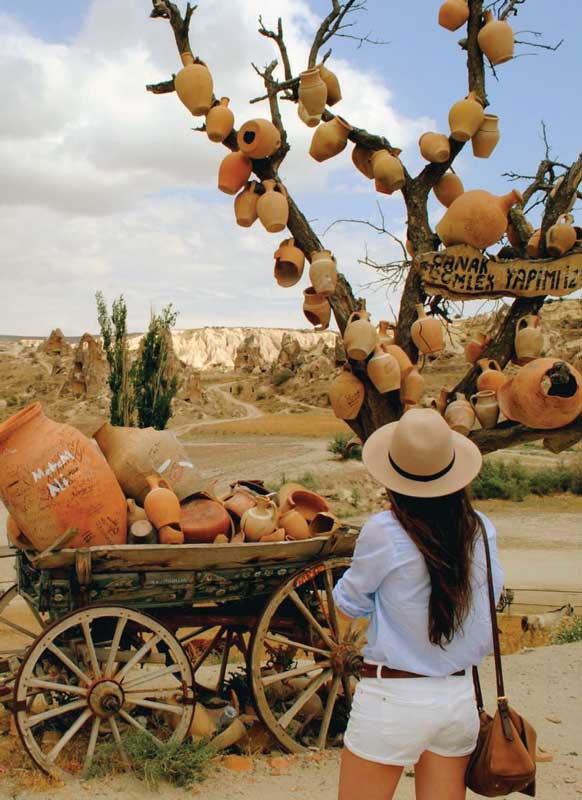 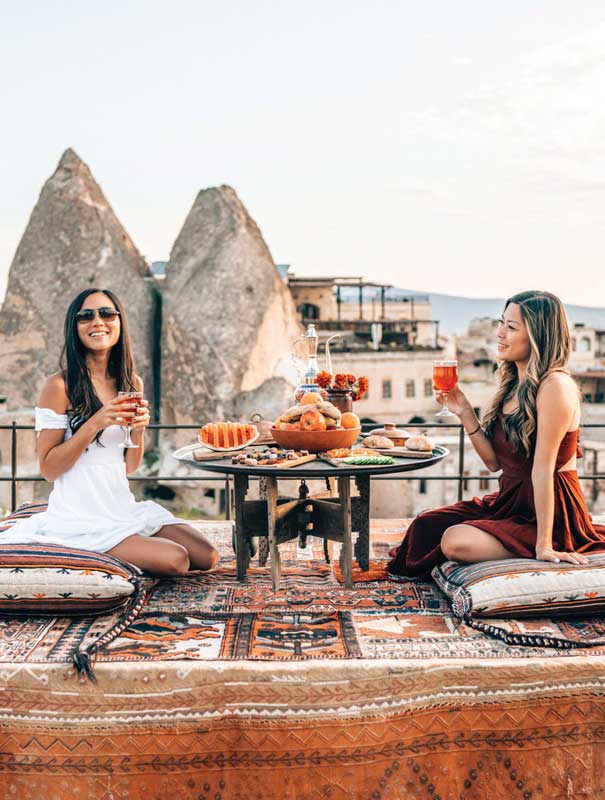 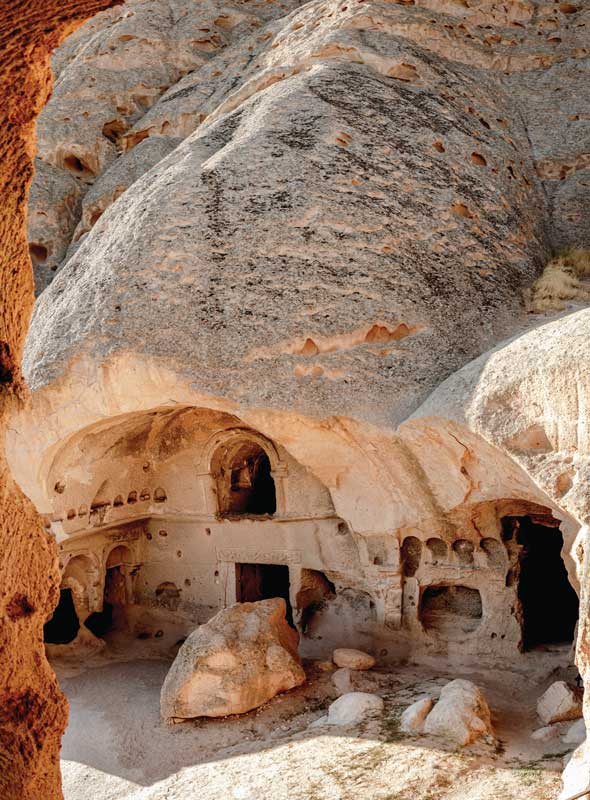 Although Cappadocia is unique, its development is part of the troglodyte civilization that established in the Neolithic, when the caves were intervened by man’s hand to take advantage of both the residential and environmental advantages of the area. Over time, truly extensive and diverse cities have been built. Cappadocia is an example of a surviving troglodyte system.

The term troglodyte explicitly describes a society settled in caves, sheltered in houses dug into the mountains or deep into the earth in caves; these procedures have been repeated in various countries around the world: Egypt, Iran, Azerbaijan, Turkey, China, Afghanistan. Also in America, Oceania and in different regions of Europe. The term also describes a prehistoric person.

These civilizations, often associated with rustic and elemental urban developments, gave rise to such extraordinary cities as Cappadocia, Petra in Jordan, and Matera in Italy. Living spaces continue to be developed caves or underground; environments are transformed by the inexhaustible capacity for adaptation of mankind.

Some famous contemporary architects have created real palaces as underground shelters, capable of withstanding any catastrophe, while at the same time developing prospects for underground cities, in emerging places in terms of environmental and meteorological threats, scarcity of land or natural resources. Living underground may also be a likely and even emerging option for the communities of the future.

In this regard, various underground shelters have been built for different purposes. Svalbard, the global seed bank, known as the “chamber of the end of the world”, may survive all kinds of disasters. Messages have been buried for future inhabitants or travelers of the future. It is said that the underground subway stations could also be used as shelters.  Perhaps a new troglodyte time could be just beginning.