Berlin The new and fascinating capital of Germany

Berlin is a world that fills one with history as you walk through its streets, its palaces and y plazas and avenues dotted with romantic buildings. It is also the city of the future, given the amount of modernist buildings, parks, and marvellous restaurants and museums. We lodged at the stupendous hotel Steigenberger in Los Angeles Platz, near Ku’Damm and KaDeWe, that we preferred over the other options such as the historic hotel Adlon or the Concorde hotel.

We arrived early in the first flight and we then installed ourselves in the modern and minimalist Steigenberger hotel; we walked outside and discovered the Kaiser-Wilhelm Gedäschtnis-Kirche, the ruins of a church tower constructed in memory of Kaiser William I, which keeps in its interiors beautiful mosaics. Here we see the Kurfürstendamm, known as Ku’Damm, that decadent avenue that has morphed into a vanguard location, a lively commercial boulevard with grandiose buildings, elegant boutiques and restaurants. 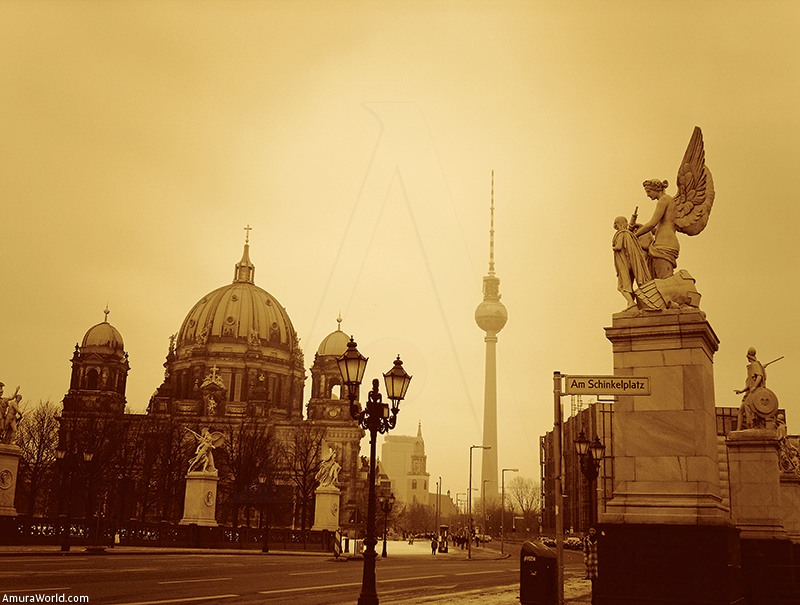 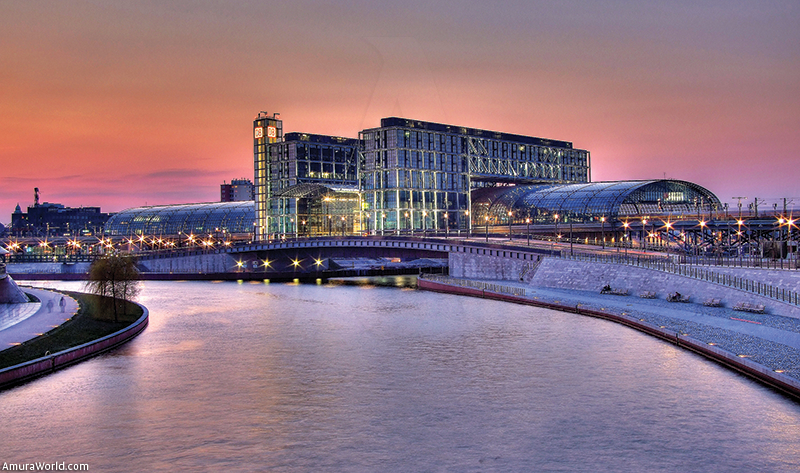 We visited the Europa Centre, a mall-type locale, and ate at the “First Floor”,  (Budapester Str 42, www.firstfloor.palace.de), famous restaurant of nouveau-German cuisine, unique in Berlin for receiving the maximum prize of 5 spoons and where we enjoyed the creations of Matthias Diether. After an excellent meal, we set out to discover the great Kaufhaus des Westens (Kadewe) store, with its eight floors of merchandise. (Tauenzien str 21-24).  Finally, we discovered the Kulturforum to visit the Germäldegalerie and the Neue Nationalgalerie. At seven we attended a Philarmonie concert to listen to Brahms and Rachmaninov. Leaving the Kulturforum, we dined at Borchardt where celebrities abound, a historical site that serves international cuisine (Französische str 47) in a high-ceiling room with colourful mosaics. We ended our night drinking delicious cocktails at the Lola-Lounge, a minimalist designed space filled with young and attractive people (Rosa-Luxemburg Str. 17). 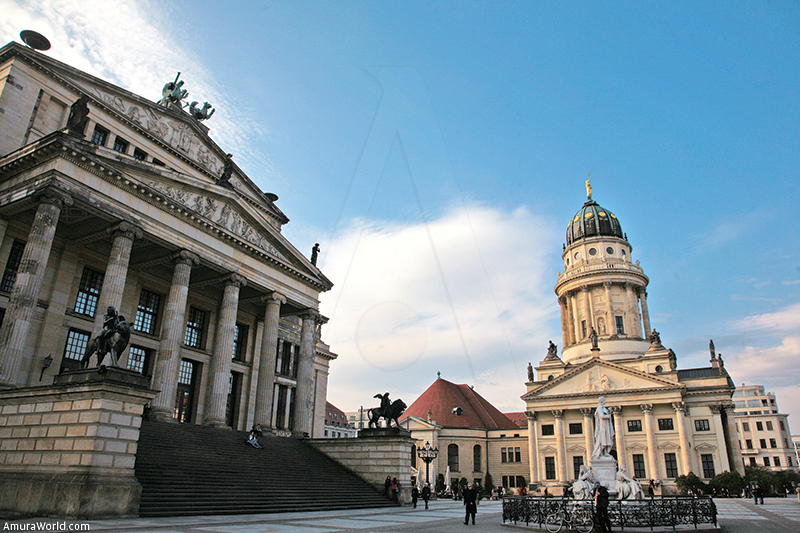 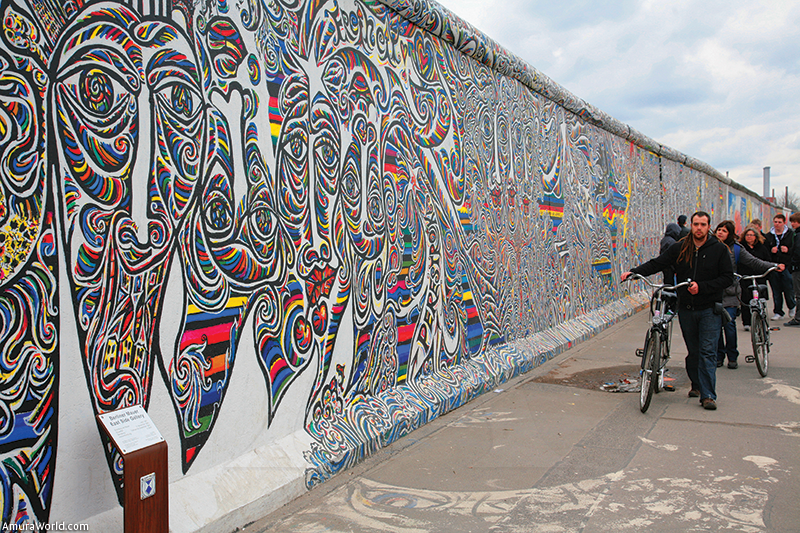 In Berlin you has to wake up early, rent a bike or the U-Bahn to discover the city. Passing the Tiergarten we reached the famous Brandenburger Tor, symbol of Berlin. Here is where the east part of the city begins, on the other side of the wall, and the first thing we discovered is the beautiful Parizer Platz where the elegant Unter Den Linden avenue begins with the celebrated Adlon hotel. After sipping on a coffee and cake at Café Meyerbeer (www.meyerbeer-coffee.de), we travelled through the avenue, dotted with historic buildings: the Deutsches Historisches Museum, the gorgeous Staatsoper Unter den Linden (Opera House), St Hedwigs Kathedrale, the elegant Opempalais palace, the kronprinzenpalais, the prestigious Humboldt Universitât, and the statue of Frederick the Great. We also strolled through the Uner den Liden, admiring the Forum Fridericianum.

We went through this exciting area of beautiful buildings and department stores, especially in the Friedrichstrasse, the German “Fifth Avenue” has regained the glamor of yesteryear with luxury shops and galleries. We reached the beautiful Gendarmenmarkt, a Renaissance square framed by the German and French with their lofty towers (XVIII) of each side of the Konzerthaus, with the dramatist Friedrich Schiller statue in front of the Schauspielhaus. Through Wihlhemstrasse, former political district of Berlin, we arrived at the Holocaust-Denkmal, a monument to the murdered Jews of Europe, designed by Peter Eisenman.

We continued our journey to reach the Postdamer Platz where the new heart of Berlin beats. This sought-after plaza filled with theatres, restaurants, a casino, movie theatres, and shops was popular in the 1920s but was left barren after the wall was erected and where one can still admire some its remains. These days, though, many a modern building surrounds it and it is thatched with an enormous transparent dome. We visited the Filmmuseum Berlin that retraces the history of the Hollywood and Babelsberg studios, home to a dress by Marlene Dietrich, and we sat at the Josty Café to enjoy a hot chocolate and observe the pace of the people, next to the Weinhaus huth, the only building in the zone to have survived the war. 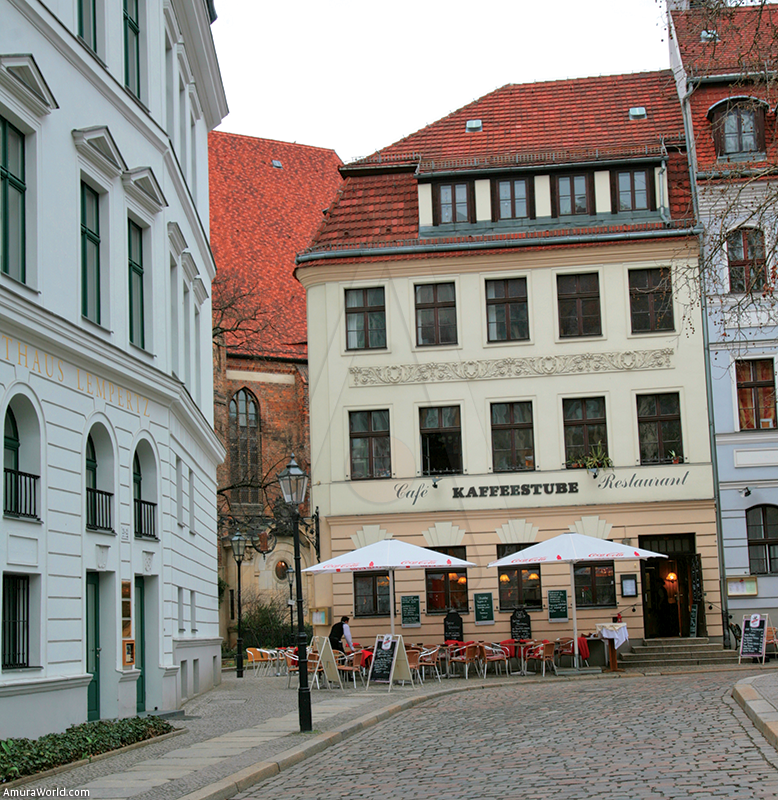 After walking and observing the area, we went to the Staatsoper to enjoy “Eugene Onegin” by Tchaikovsky and Silovski, with the majesty of the orchestra and singers. Then we went to dinner at Aigner, an original Viennese restaurant serving authentic Austrian cuisine (str Französischer 25). The “Big Eden” (Kurfürstendamm 202) was out next stop, where we lost ourselves in that massive plaza amongst the crowds, a place filled with magnificent music and a delirious ambience.

After a sumptuous breakfast, we took our bikes a rode once again through the Tiergarten until we reached the Bradenburg Gate and on to the Ägyptisches Museum, to discover the fabulous collection of Egyptian art and the famous Nefertiti that reigns over the sarcophagus, statues, and mummies of the museum. Once out, we strolled by the edge of the Spree River, which was made famous by the people on the East trying to cross it, but also for being the home of many restaurants and cafes. We then visited the Marienkirche, the beautiful Berlin church, built in 1270 and remodelled in the 15th and 17th centuries, giving off a baroque air where alabaster pulpit, altar and baptism Gothic pillar shines. 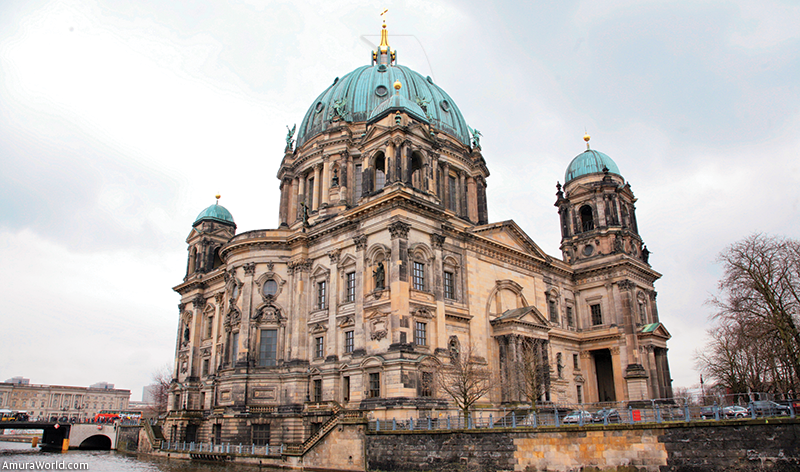 We reached Reichstag, that emblematic and majestic building, built in 1884-94 by Paul Wallot as a symbol of the German Reich. The copula is spectacular, and allows one to reach the access to the cusp that offers exceptional views of the city. We ate at the famous and elegant Käfer restaurant, enjoying modern German cuisine made with regional fresh products accompanied by German wines. The view over the green landscape, the Tiergarten forest, the spree River, the governmental modern buildings (Bundeskanzleramt) and the S-Bahn train station is spectacular. To the horizon one can see the Schloss Bellevue where the president of the Federal Republic of Germany resides.

We took our bikes to cycle back Unter den Linden, Berlin elegance breathing, reaching Nikolaikirche, the medieval church of St. Nicholas built in 1230 on Nikolaiviertel. This neighborhood retains its medieval atmosphere with its cobblestone, narrow streets and small-town homes on the river Spree, adorned with shops and restaurants. We loved the Knoblauchaus that holds the museum of everyday life, one of the few houses that escaped destruction. We reached the Alexander Platz to watch the crowd walk, is installed in cafes, in the shadow of TV tower, Berliner Fernsehtrum of 365m in height. We climbed to a vantage point to cover a panorama of 40 km and enjoy some a Viennese pastries at in the Revolving Restaurant. 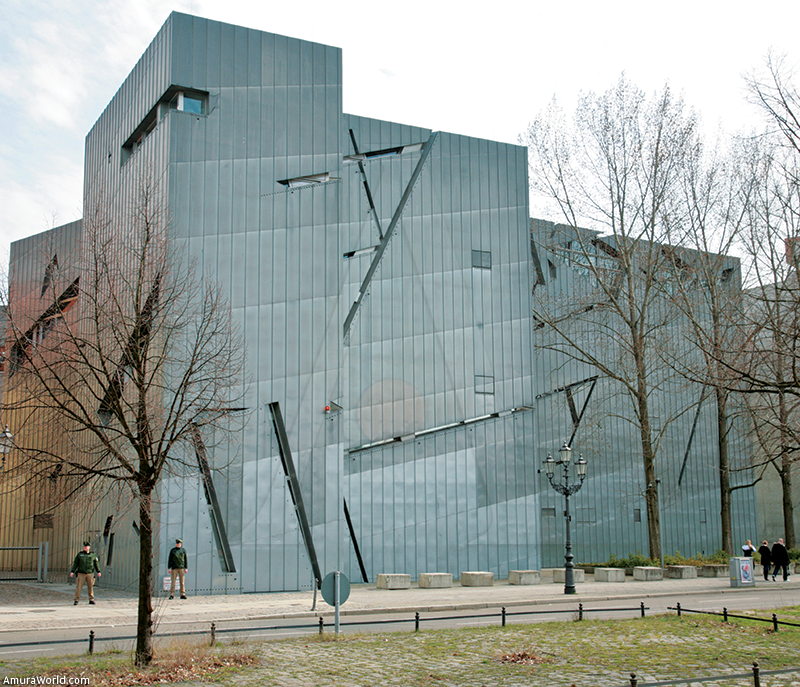 We prepared then to reach in due time the Kulturforum and be able to visit the fabulous Gemäldegalerie, admiring Rubens, Carvaggio, Durher and others before attending a musical concert in the Chamber of the fantastic Kammermusiksaal, enjoying exceptional acoustics. We dined then at Zum Paddenwrit (Nikolaikirchplatz 6), the favourite restaurant of lovers of Berlin cuisine, filled with fried herring and pork dishes and beer.

We began our day with a visit to the Jüdisches Museum, unique for its futuristic and mysterious architecture that resembles an unusual bunker and which presents a one-thousand year journey through the culture and history of Jewish Germany. We continued to walk through the Kreuzberg, the most famous and lively neighbourhood of Berlin where Turkish families, artists, students and “alternative” people live. We passed by the Oranienstrasse, the most colourful street, the soul of Kreuzberg, the bohemian road that mixes a Turkish and alternative ambience. We then reached the famous East Side Gallery, a long stretch of the Berling Wall 1.3km in length next to the Spree River and which now is an open-air gallery.

We continued by Scheunenviertel  neighborhood, the former Jewish district of Berlin that had fallen into disrepair after World War II, now with bars and restaurants that have become a hot spot. Hackesche Höfe is a charming group of buildings consisting of nine interconnected courtyards which highlights the Art Nouveau, especially in the first with his characteristic style mosaics. It houses several shops, bars and restaurants that invite a lot of fun, especially at night.

We returned to Kreuzberg to dine at the Altes Zollhaus (Carl-Hers Ufer 30), an ancient military outpost on the shore of the Landwehrkanal where we enjoyed its famous Brandenburger Landente Aus Dem Rohr, roasted duck with seasonal mushrooms. After an excellent dinner we entered the Metropol Theater, an ancient theatre that has been transformed into a fascinatingly bizarre nightclub with an alternative twist. We ended our night at 90 Grad (Dennewitzstr 37) with fabulous music and great energy. 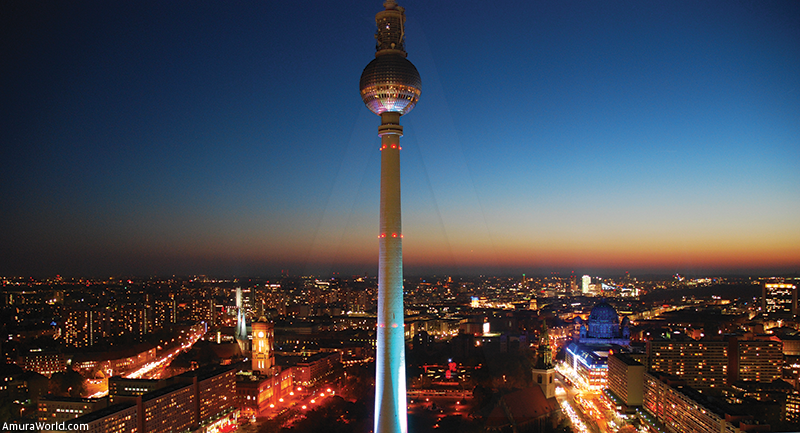 With our bikes we travelled through the beautiful avenues that took us to Charlottenburg, which represent the essence of Berlin, more urban and cosmopolitan, more bohemian and elegant. Its historic roads near Ku’damm, the residential houses of the early 20th century which harbour cafes, restaurants and art galleries and boutiques, make of this neighbourhood an enchanting place with a rich Prussian flavour. The goal was to visit Schloss Charlottenburg, the residence of Sohpia Charlotte of Hanover, wife of Frederick I of Prussia.

Later we traveled 7 km in the middle of the forest environment of northern Grunewald up to Spandau, the medieval village that became part of Berlin in 1920 and retains its narrow streets. Not far from the Nikolaikirche, Spandau Zitadelle is the only fortress that remains in Berlin, at the confluence of the rivers Havel and Spree, built in 1560 in a star surrounded by a moat. We ate at Florian (Grolmanstr. 52) to enjoy the bustling atmosphere of the scene movies and enjoy their southern German specialties. On this beautiful sporting sunny day we continue our bike ride through Grunewald, a green area of lakes, streams, small castles, beautiful private homes and residential villas. 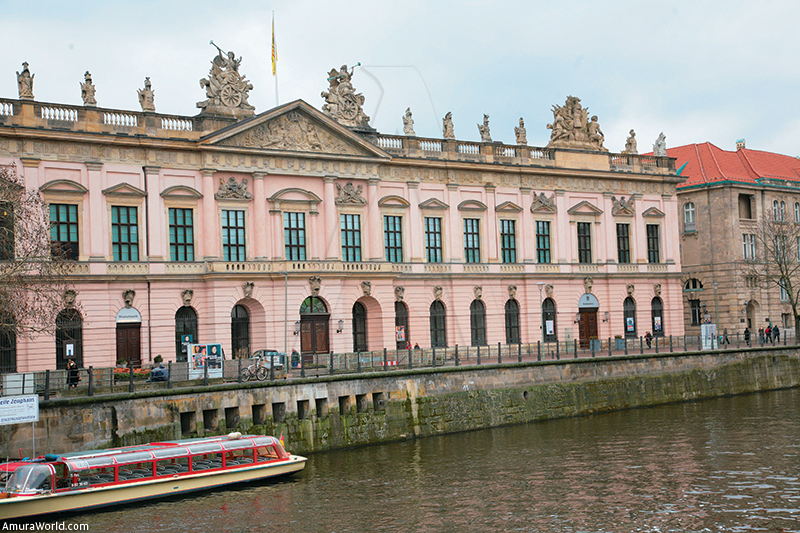 Rejoicing in the leafy landscape, and the beautiful mansions, we pedalled back to Charlottenburg to make a stop at the Savigny café (Grolmanstrasse 53), in Savignyplatz to enjoy the fruitcakes accompanied by copious amounts of coffee. The plaza is an area frequented by artists and intellectuals who enjoy the cafes and restaurants that are deemed fashionable. Its parks are ideal to walk by, and the whole neighbourhood seduces one with its pretty streets, shops and idyllic bookstores.

After resting in the hotel, we attended the Philamornie to listen to Bach’s Concerts in Brandenburg, and then returned to Savignyplatz to dine at Paris Bar (Kantstr 152), the most famous French restaurant in Berlin, highly frequented by celebrities thanks in part to its elaborate dishes and exquisite ambience. We ended our debauchery near Savignyplatz, bar crawling through the Grolman, Knesebeck and Carmerstrasee streets, which are filled with people. This area received the name of Savignydreieck (Savigny triangle) because of its festive ambience and lively company.

And thus we ended our five nights in Berlin, enjoying its museums, shops, restaurants and roads, leaving us with an intense desire to go back and feel again the vibrations of the new heart of the authentic Germany. 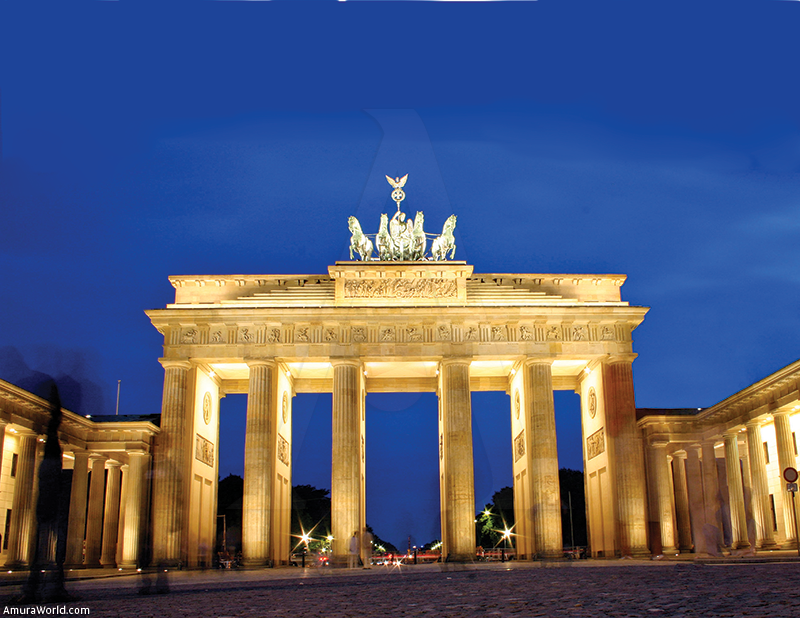