The astronomical clock of Prague; haute horlogerie for World Heritage 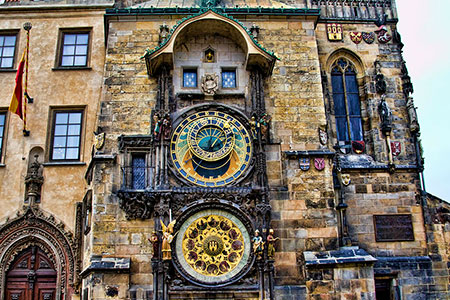 A medieval jewel of time that has achieved immortality; it rests outside the City Hall of one of the most beautiful places on Earth: The ancient city of Prague.

Just as it’s name indicates, the astronomic clock takes into account the positions of the celestial bodies, it also holds zodiac signs and an incomparable art that oscillates between each piece. Adorned with paintings of Josef Manés and sculptures that parade in one act since its first day, it has been admired by the eyes of time and the world.

Each hour, this marvel, -which creation is accredited to Master Hanuš in the year 1410, mesmerizes locals and foreigners with it’s unique spectacle. It also possesses a one of a kind mechanism that has transcended its legendary history.

Story goes, that during this time period, in order for Hanuš not replicate his creation, was cruelly blinded by councilmen, who wouldn’t allow for another piece of art of such magnificence to exist. We don’t know if this is true, but this kind of work has never been seconded in any port of the globe. You only have to behold it’s magical march in detail: