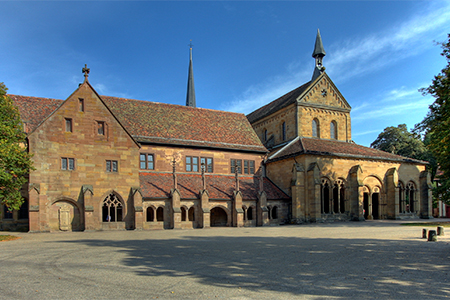 Our latest edition is dedicated to Berlin, and soon will be available to our readers. Meanwhile, we can´t stop talking about this destination; Germany has simply amazed us and we want to mention one of those places that we can´t lose if we go to this latitude in Europe.

It is Maulbronn, in the district of Enz, a medieval ark that appears to have been created by the most talented engineers of the time, given the masterful work to create a complete city with an unmatched architecture in the world and a canal system very efficient and advanced for its time.

The Cistercian monastery, famous for the majestic building that remains intact for almost 900 years ago has been declared a World Heritage Site by Unesco, and generates a particular energy that is accentuated by the many legends surrounding the abbey.

A romantic tone prevails not only in the monastery, but throughout the city; peaceful, almost waking , perhaps for being a place where the monks were permanently silent, only talking in certain permitted corners.

Curiously, the author Herman Hesse mentions this city -and specifically to the monastery-, in his book Beneath the Wheel.  Located in Baden -Württemberg, close to the cities Bretten and Knittlingen , this is definitely a must-see item on the itinerary of our trip in Germany.