In the mid - 19th century, Sotirio Bvlgari articulated a vision of elegance that has since proven capable of transcending the boundaries of both time and space.

It´s enterprising spirit upset many existing schemes, anticipating practices that would become standard only much later.

One of such practices were to bring his watches directly to Europe’s most elite tourist destinations of that time, from season to season. It is an empire founded on taste and magnificence.

It is to this remarkable man–multicultural voyager ahead of his time, entrepreneur, aesthete and founder of one of the world´s most respected jewelers and watch makers.

On the occasion of its 125th anniversary, a watch as extraordinary as the history that began with its founder. And it presents the BVL465 Caliber represents a unique fusion of functions: an automatic see through tourbillion and perpetual calendar with an innovative display that features double coaxial retrograde hands, offered in a limited edition of 30 pieces.

The dials of all the Sotirio Bvlgari watches are the result of a singular and rigorous design approach that combines classic formal elegance with contemporary aesthetic.

This is immediately apparent in the hand applied indexes and the large Roman Numerals that refer back to the origins of Bvlgari. While at the same time standing out boldly against the variety of surface treatments that distinguish the range of Sotirio Bvlgari dials the multiplicity of levels creates a subtle optical effect that lures, and then seduces the eye. 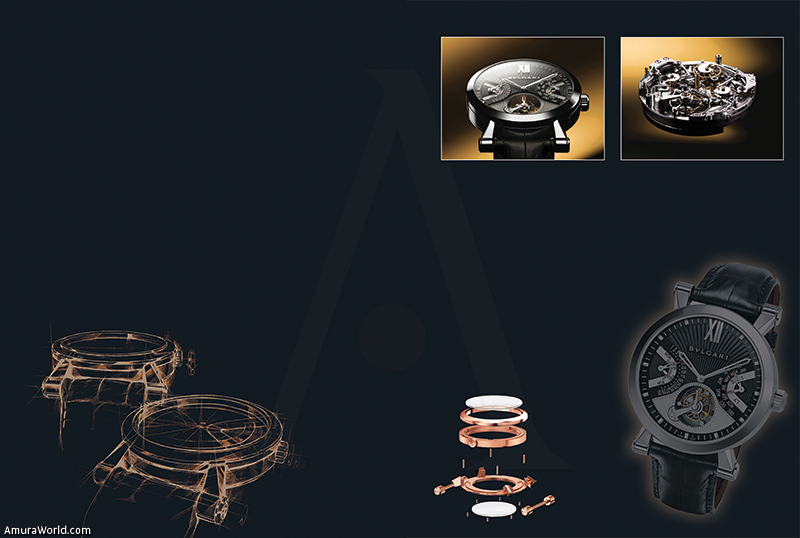 The delicate play of embossed finishes and curvilinear geometry are in perfect harmony with the aesthetic purity, for which the brand is renowned. Every detail has been designed and engineered in -house by Cadrans Design.

The transparency of the sapphire crystal and the precision of the counters, Hand-applied “cadraniers”, exemplify the complexity of the workmanship involved, resulting in that rare kind of beauty that can only come from meticulous attention to even the most imperceptible of details. No less exceptional is the strap clasp, a variation on the classic Ardillon buckle with a distinctive 450 cut. Produced by Prestige.

The buckle is the perfect finishing touch, endowing every Sotirio Bvlgari watch with its peerless formal cohesion, the crowning achievement of the Bvlgari Groups control, from start to finish, of the entire manufacturing process.