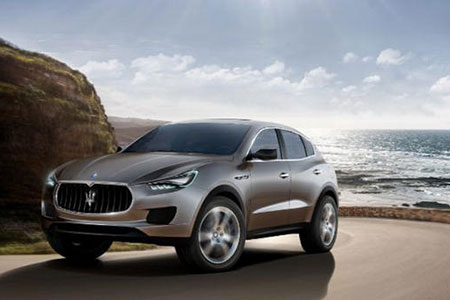 The luxury carmaker Italian brand, Maserati unveiled its long-awaited SUV will come in late 2016 because the leading brands of luxury cars already working on the design and development of its SUV.

Italian carmaker owned by FCA (Fiat Chrysler Automobiles) plans to release a version ready for production of the SUV Levante in the next Auto Show in Detroit in January 2016, to give a preview of the production in March.

The SUV named "Levante" Maserati give a foothold in the rapidly growing segment of luxury SUVs, including the Porsche Cayenne and Range Rover Sport, and will be expanded next models of Bentley, Aston Martin, Lamborghini and Rolls Royce.

The SUV will be available with a diesel engine V-6 and V-6 and V-8 gasoline engines taken from another subsidiary of FCA, Ferrari, which will offer up to 580 horsepower.