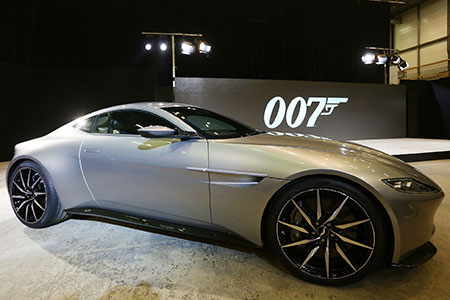 Only 10 Aston Martin DB10 exist in the world, one will be auctioned at some point. This exquisite car has been created exclusively for the shooting of Spectre, the last delivery of the James Bond saga, and it will have only one owner in the entire world. What will happen with the last remaining nine? One will forever rest in the SONY museum, the rest have an uncertain future. However, the exclusivity of this design is unique; Aston Martin has gone back to its roots with the DB5 to create it’s exponent.  One of the features of this model is the epitome of elegance and sophistication it portrays; to be honest, isn’t this exactly what the agent 007 inspire?

This duo between Aston Martin and the James Bond franchise has a legacy of nearly 64 years, when the iconic film of Goldfinger was created. This strategic move makes it clear that their history together will continue.

Aston Martin DB10 and it’s antagonist, Jaguar C-X75, are the two vehicles that 007 –interpreted by  Daniel Craig- and the current villain–  Christoph Waltz-, manage with skill and choleric action in this movie how’s budget seemed to be unlimited or almost unlimited.

What will happen to the remaining models? Only time will tell. What we can be sure about is that the Aston Martin DB10 will not be produced in series, so we will have to daydream with emulating the path of the most important fictional spy of all times.