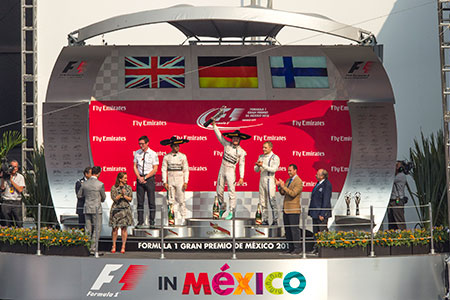 Some Mexicans talk about the Mexican Grand Prix and some people are not entirely satisfied with the race, judging by their comments, and there are even those who have dared to say that the event has not the transcendent return that everybody everyone expected, or that the race was boring. Couldn’t be farther from the truth! The fact is that F1 is a total success after 23 years of absence ... and worth analyzing some facts of why the Mexican GP is a complete success in every way and absolutely to the level of his comeback after decades of absence.

"This is the best podium of the season," said Nico Rosberg (Mercedes AMG) – winner of the Mexican Grand Prix-, where the great atmosphere made ​​by Mexican fans is the best thing that could happen to this sport.

2. First world at all levels.

There were details that assistants had to overcome, but the truth is; from the racetrack to the last detail, everything in the return of F1 to Mexico had a first class stamp that has nothing to envy to any other destination. "We should bring some of the European promoters of these races to see what they should do," said about the Mexican organization Bernie Ecclestone, an absolute authority of the F1 world, who also added emphatically: "It's amazing… all these countries with certain economic problems and doing an excellent job. Meanwhile, the 'big ' Europe ... really, it's the people who make things work. It is not necessarily the circuit or the paddock, only attitude people. It has nothing to do with money, it is simply the willpower of the people ".

3. The conditions of Mexico were a real challenge, which also was overcome!

Many people do not know that Mexico City is located at an altitude of 2,200 m above sea level, which far exceeds the 800 m of the Interlagos circuit in Sao Paulo, Brazil, which I used to have the highest racetrack. Why is this important? Simple, is not the same running 70 laps at a lower height to a kilometer, compared to a race track with more than 2 km above the sea level.  That is why in Mexico the challenge is greater and this requires better physical condition to perform every feat on the racetrack.

4. Mexico is now the fastest circuit of F1

Felipe Massa (Williams) registered the highest speed in F1, breaking the record in Monza , Italy won by Kimi Raikkonen (Ferrari ) -of 358.3 km / h.- , to achieve a speed of 364 km/h in Autodromo Hermanos Rodriguez in Mexico City, although it should be noted that Lewis Hamilton had previously reached 362.3 km/h in the Mexican circuit, which would have already become the fastest serial.

5. Checo Pérez, the flagship of honor and a great winner at the Mexican Grand Prix

The fans love about this Guadalajara pilot was felt all the time -especially when he led the pilots parade- and Checo (Sahara Force India) let us know why he is so dear; made only one stop and finished eighth.

6. The race was completely satisfactory

And indeed, in the words of Fernando Alonso (McLaren Honda): "It's been one of the best races of the year, if it is not the best". End of discussion! And to those who say it was a boring race, maybe they were not there, or don´t know about what is involved in running at the the highest circuit in the world and now also the fastest...

Two Mexican drivers are already confirmed for 2016: Sergio Perez and Esteban Gutierrez. Haas F1 Team officially launched to Esteban Gutierrez for 2016, who for a year has been third driver at Ferrari, while Sergio Perez will continue as a race driver in the Scuderia led by Vijay Mallya (Sahara Force India).

Even Carlos Slim has commented: "The secret lies in the talent, experience and sacrifice that have have done both (Esteban and Sergio) to arrive. The commitment is with themselves to be the best and achieve their dreams. "

As if that were not enough, this is the first time that Mexican Grand Prix has a celebration like Amber Lounge, a glamorous party that has accompanied the F1 in cities like Monaco, Singapore, Abu Dhabi and Austin. How was the party? Well that 'll tell you soon, but meanwhile we have these seven facts to defend the return of F1 to Mexico, then certainly we can say it has been a resounding success that has left us wanting for more in the following years, when F1 attract again the eyes of the world to Mexico for a so noble reason like this great sport. 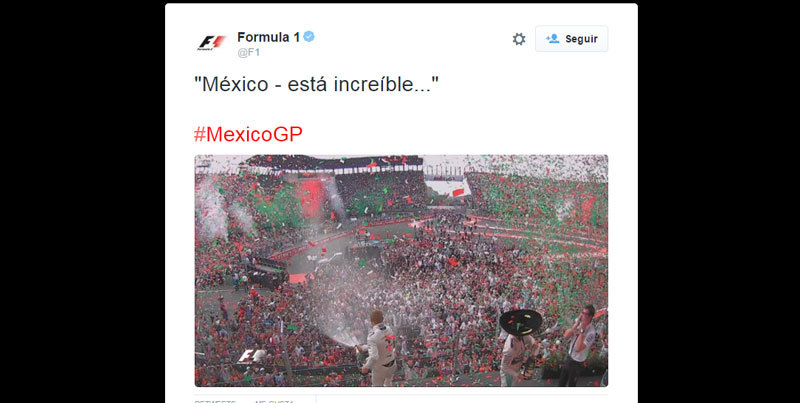