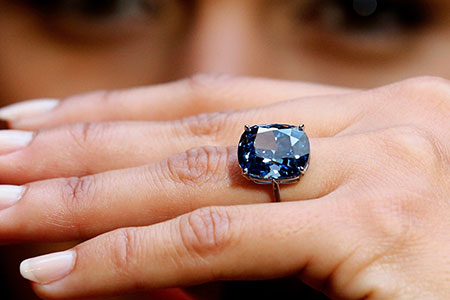 The Blue Moon diamond, of 12.03 carats, with an intense blue glow is valued in 48.4 million USD dollars, already has an owner and it’s a seven year old girl.

This is the result of the auction that took place in Geneva, in Sotheby's, where this sale broke records and turned it into the most expensive diamond on Earth. We are talking about the “the highest price by carat” in the words of auctioneer David Bennett.

Joseph Lau, owner of the company Chinese Estates Holdings, realized the purchase of the diamond as a gift to his daughter Josephine, who is only seven years of age. This is only one of the reasons why the gem has been re baptized as “Blue Moon of Josephine”.

This isn’t the first time this multimillionaire presents gifts in the shape of gems to his daughters; in November of 2015, he acquired a blue diamond of 9.75 carats for 32.6 million US dollars, which he named “The Zoe Diamond”, in honor of his 13 year old daughter Zoe . Like these examples, several other follow for Zoe and Josephine.