A Rolling Stone by ZENITH family 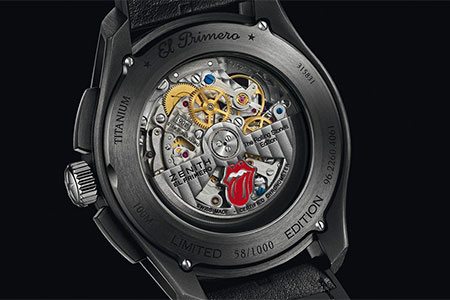 Zenith celebrates its 150th anniversary and what better way to celebrate than with the first Chronomaster 1969, a stunning Rolling Stones tribute to be framed by time.

This edition of only 1000 pieces in the world is a masterful Rock 'n Roll machine than every fan of this music legend want to have, but only a very few wi´ll.

Heir to a model that revolutionized watchmaking  over 40 years, Chronomaster 1969 Tribute to The Rolling Stones resumed their codes with a contemporary look and whose musical DNA is hard and fabulous. This masculine piece has all the soul of the iconic British band, and has been manufactured with advanced materials such as silicon in the anchor and escape wheel.

It features an open concept area at 11 hours, which allows us to contemplate the regulatory body clock. Needles recapture the mast figure from the Fender Telecaster, used and converted into legend by Keith Richards.

The strap provided with a triple folding clasp with PVD black coated and insert with Barenia calfskin, and it is personalized with the colors of the band- and from their home country-. The Rolling Stones emblem and the British flag are hot stamped, tone on tone, on the skin. This is a masterful tribute.