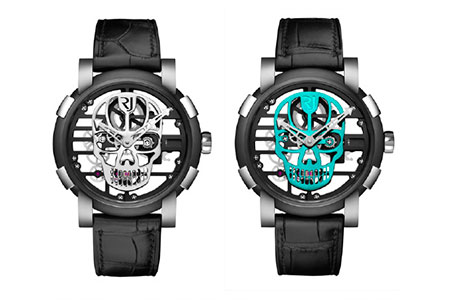 RJ -Romain JEROME, the independent Swiss Maison, just unveiled his latest collection, inspired by the culture of skateboarding. It is noteworthy how Skylab Skull 48 offers a less conventional touch to a timepiece.

With its transparency and the distinctive skull, the 48mm case timepiece is a nod to the trend “Skulls n‘wheels” – which consists of placing skulls on cars’ wheels, rim and hubcap – stemming from street culture and mostly skateboarding.

The 80’s were skateboarding golden ages with prolific graphics which are still influencing the field today. Led by the best skaters of the period, including the iconic team The Bones Brigade, the trend that emerged and that shaped the entire skateboarding world, whit the skulls as a symbolic element of great relevance, as well as a bold and interesting ornament.