Twin Turbo Furious: The “Watch of All Extremes” 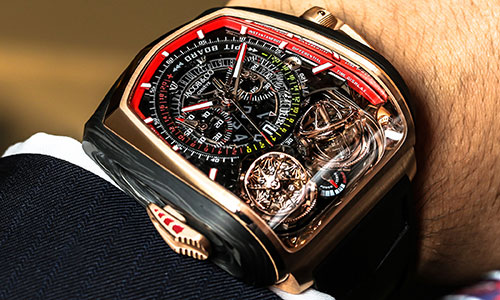 JACOB & CO. presents the introduces its latest complication watch, the Twin Turbo Furious, an extension of the brand's Twin Turbo line. Destined to be an emblematic piece, it boasts a difficult combination of double accelerated double sequential shaft tourbillon, a minute repeater and a monopusher chronograph.

Twin Turbo Furious stands out for the double accelerated triple-axis sequential tourbillon in its striking design. The tourbillons fly their courses at a rate of one rotation in 24 seconds in the first axis, eight seconds in the second axis and  30 seconds in the third; if either of the two tourbillons is affected by the shock, the other would compensate for the possible discrepancy and maintain the perfect precision of  movement.

Jacob & Co. wanted to push the limits of the Twin Turbo Furious; the new model chimes every ten minutes and it includes security devices; in addition, a very specific chronograph function was added to the model, and it’s equipped with a “reference time” indicator. It has a screen located in the center of the dial that indicates the difference in seconds compared to a reference time initially set by the chronograph hands. The model includes a leather strap secured in a folding buckle.