Third stage of the Shark Project

To complete the third stage of the “SharkProyect”, we travelled from the 4th to the 9thof August to a small village called MoreheadCity, which is located in North Carolina, USA, wherewe could photograph the “Sand Tiger Shark”, thusachieving the goal we had established for ourselvesat the beginning of this project. 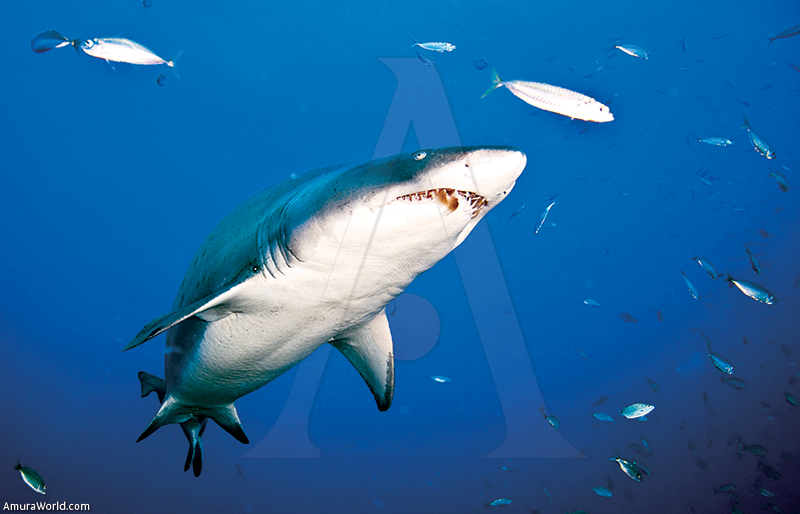 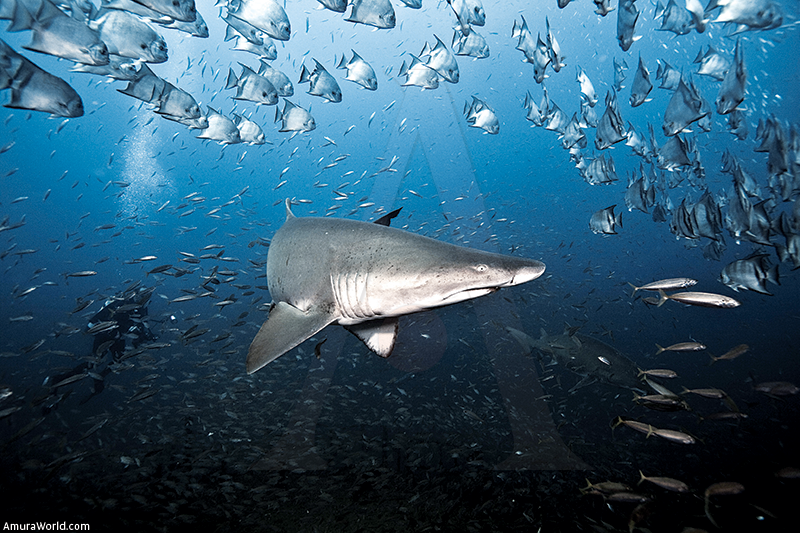 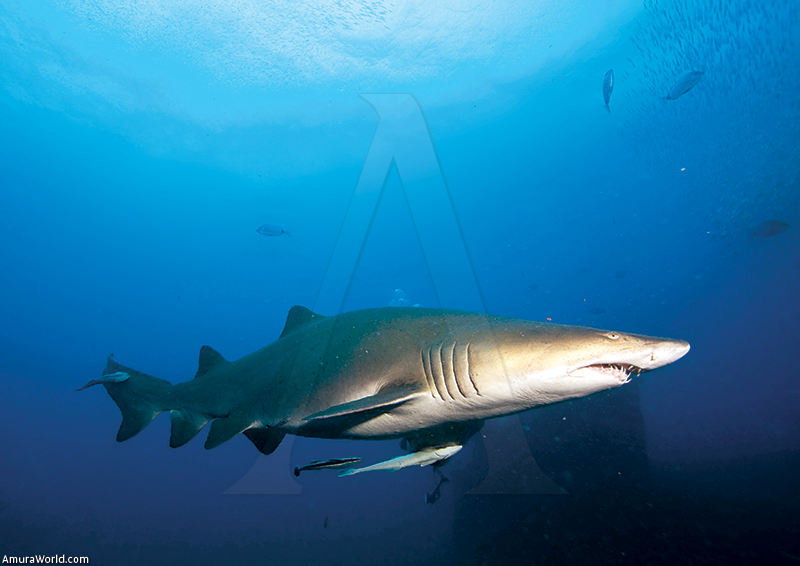 ■ Identification: They possess a mandible withsawed teeth, which are pronounced towards theoutside, and a pointy snout that makes appearas if it’s growling. Voluptuous body. The first setof dorsal fins are found venid the pelvic fins. Theanal fin is long, as the pelvic and second dorsal.The coloration on the upper part of the sharkranges from maroon up to golden gray hues, usu-ally dotted with darker spots. The underbellypresents a pale colouring.

■ Habitat: They are located in and around rockycoral reefs and sunken ships, in warm and tropi-cal water. They can be observed from the surface200m or more in clear water.

■ Behavior: Frequently seen at the bottom of theocean, floating and static, a behaviour acquiredfor their ability to swim to the surface for air,this allows the shark to floats in the same man-ner that a fish would by filling its natatorybladder with air. Although docile, the sand ti-ger shark is known for thrusting itself at greatspeed when it’s hunting or looking for food. Itsdiet varies according to where it is located, gen-erally consisting of bony fishes, smaller sharks,and rays.

■ Reproduction: Ovoid and embryologic, the em-bryos that are found in development practice can-nibalism, eating their younger brothers, until oneshark remains in each uterus. Aggression duringmating has been recorded. Males in captivity havebitten females close the gills to have a place tohold on to during mating. The females stop feed-ing themselves during a gestation period, up tothe point where hydroids grow on their teeth.

■ Similar Species: Sand tiger shark with smallerteeth (Odontaspis ferox) identifiable by their vo-luminous and conic snout, by the position of thedorsal fin that is longer, and closer to the head.

■ Reaction to the divers: They stay still unless adiver comes too close to them. Normally they arenot aggressive to divers, but the males can be dur-ing mating season, or courtship.

First, the large quantity of shipwrecks. One caneven observe a German submarine that was sunkenby the american Army. Some of the ships wheresunken by foul weather, while others where placesfor the sole purpose of creating artificial coral reefs.

The second reason, the one which bought ushere, was the “sand tiger sharks”, which have cho-sen ships to live inside these ships. 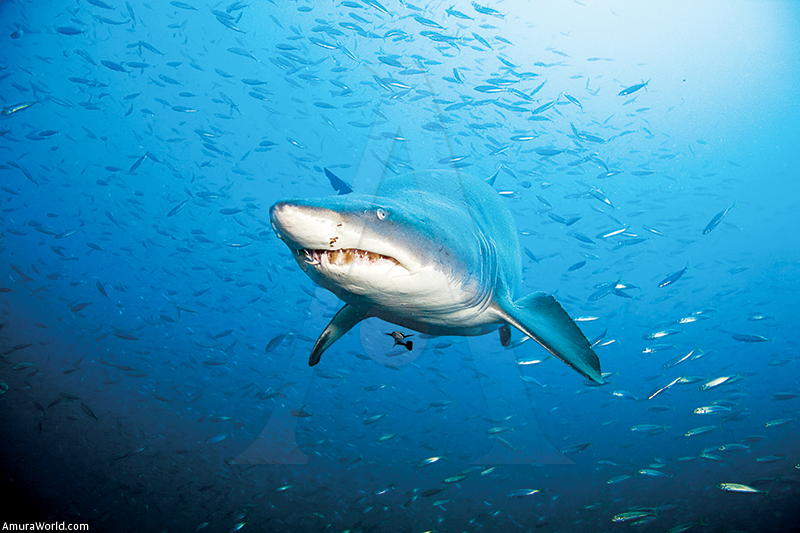 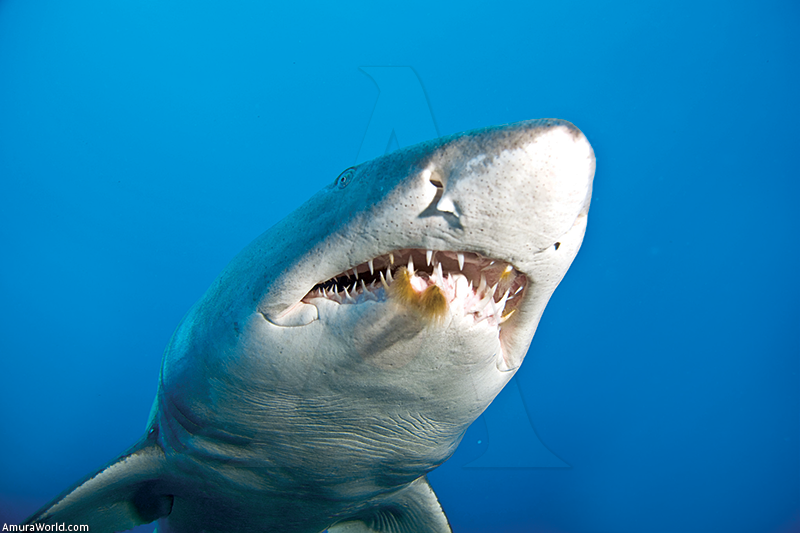 We dived for three days on different shipwrecks:The ‘Titan”, the “USS Indra”, and the “USCG Spar”. Inthese dives we saw plenty: turtles, a great variety offishes, and, of course, sand tiger sharks.

Diving with these power sharks that can growup to be 10 feet in length and weigh over 1,200lbs is inspiring. They glide across the waters verysmoothly and, on some occasions, are surroundedby fleets of smaller fishes that used them to protectthemselves from other predators

While they are swimming by you, near the rustystructures of the sunken ships, they appear as theghost of the former crew members of the ships. Itwas an impressive experience given that we whereable to see more than 20 of these sharks in onlyone dive, being able to glide their underbellies andsee their jaws approximately no further than 20cmfrom the camera lens.

With this phase concluded, we have coveredthree of the most dangerous sharks: the tiger shark,the bull shark, and the sand tiger shark. On the nextphase, we will be photographing the Mako shark,and the Blue shark of the Catalina Island, in Califor-nia, USA. 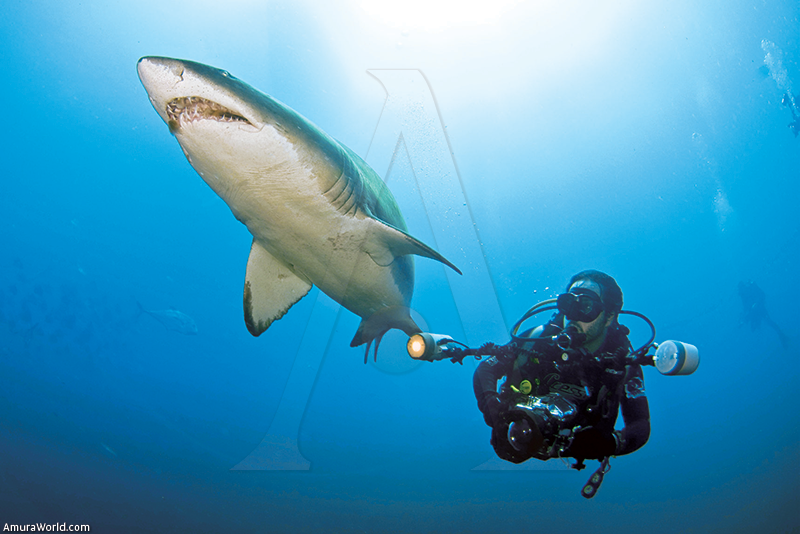 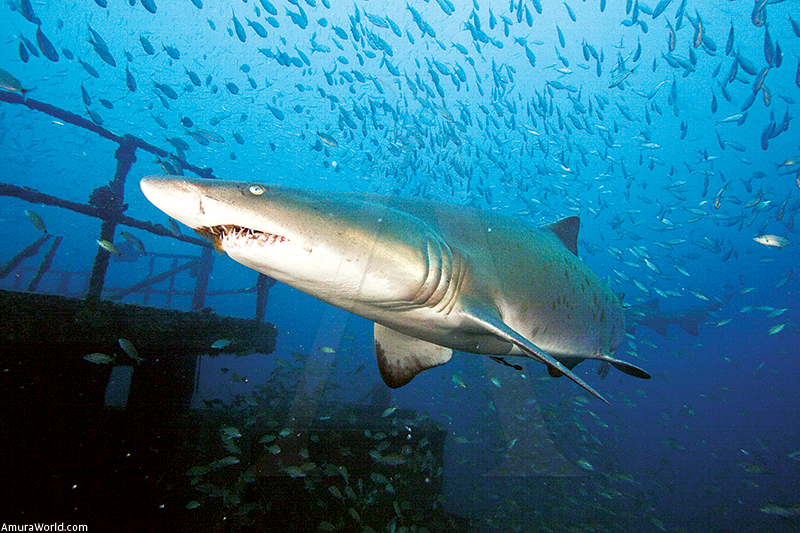