The Flamingos of Cuyo

The Yucatán Peninsula never fails to surprise me, even though I have been visiting the area for almost 30 years.  I always see very beautiful things, such as on my most recent trip to Cuyo, a small fishing village in the neighboring State of Yucatán. It all started from an invitation I received from the actor Fernando Carrera, who, amongst his multiple activities, films for Animal Planet.

Fernando had to write an article about the flamingos of the Yucatán.  So he invited us, the infallible Armando Gasse and me, to accompany him on this beautiful adventure. So, one afternoon, at the beginning of May, we found ourselves traveling along the Federal Highway from Cancun to Mérida, from where we took the turnoff at kilometer 80. And through a network of small roads we arrived at Cuyo, which is practically on the border of the States of Yucatán and Quintana Roo. 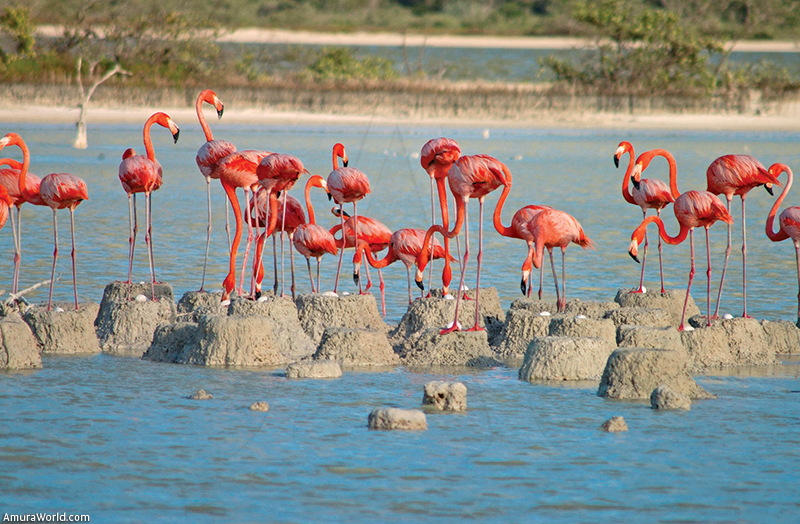 El Cuyo is a small community consisting mostly of people who work at sea.  It is so quiet that when Armando and I arrived at about 9:30 at night, everything was silent and almost nothing was open. We eventually found a cafe that was open, where they proudly served as with the typical dishes of the region, such as papatzules, salbutes, panuchos and the dietetic tacos de lechón, all accompanied by a refreshing coconut horchata drink. With full stomachs and tired bodies, we stayed at a central hotel to await the arrival of Fernando from Mérida, and to try and rest for the few remaining night hours, since we had to get up very early the next morning.

The sun had not come up yet and we will already on board a launch, accompanied by the biologists and Rodrigo Migoya, who knows the most about flamingos in Mexico. We headed silently towards a small outcrop of land. Even before we could see anything in front of us, we could hear great joy. We had been told that it is fundamental to arrive in the almost-darkness to be able to get closer to the flamingos without scaring them. We moved forward carefully and took up our previously-assigned places.

The sun did not take long to come up; the great ball of fire that it is.  In front of us, the ghost-like images of the first silhouettes of these beautiful birds appeared before us in all their wonderful colors. As I felt nervous, I didn’t know what to do, whether to film, photograph or simply enjoy the wonderful spectacle. 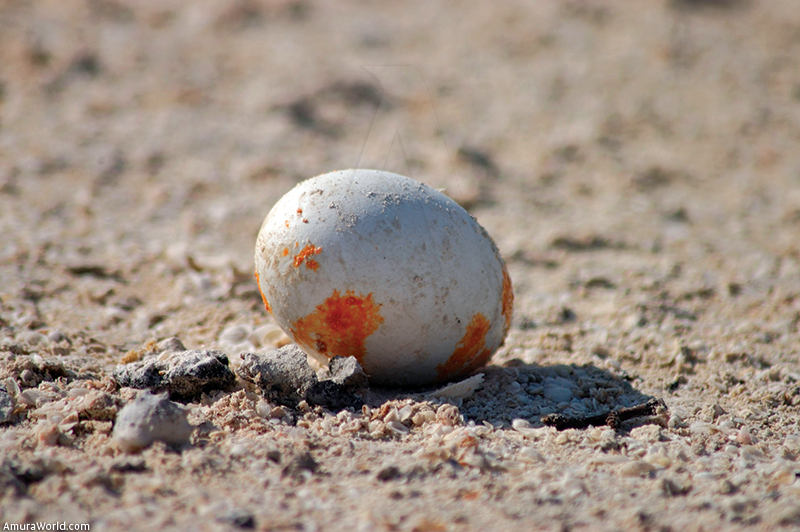 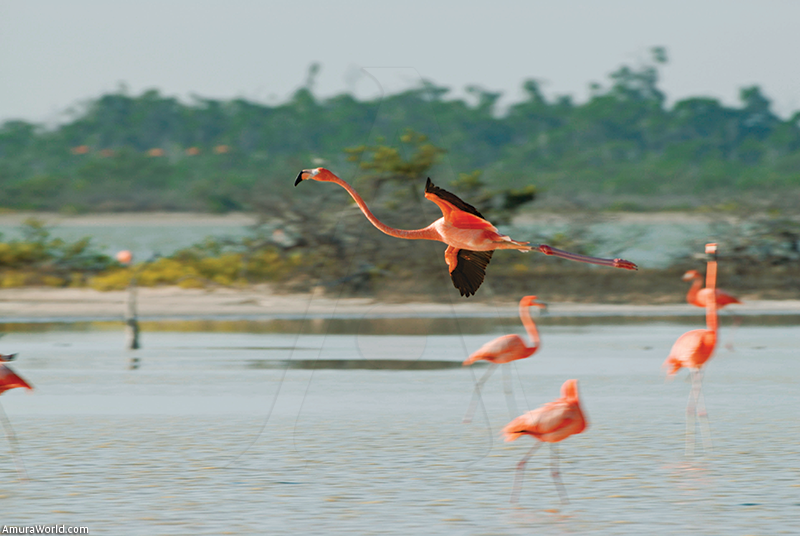 Little by little, the place began to fill with life and joy as the birds, pelicans and seagulls took flight. What most caught my attention was the arrow of fire that passed before us: the first flamingos had arrived. Our cameras began to work, even though the light was still very poor.

The experts told us that the flamingos congregate in May for the breeding season, which is the culmination of their routine activities of the year. Everything that happens revolves around this central event.  Looking for food, the prenuptial shows, the formation of couples, nest building, everything contributes to the laying and simultaneous incubation of the highest possible number of fertile eggs, a goal that is not always achieved every year by a colony of flamingos. Although every day, luckily, thanks to the care of the park rangers, the colony of flamingos is larger. 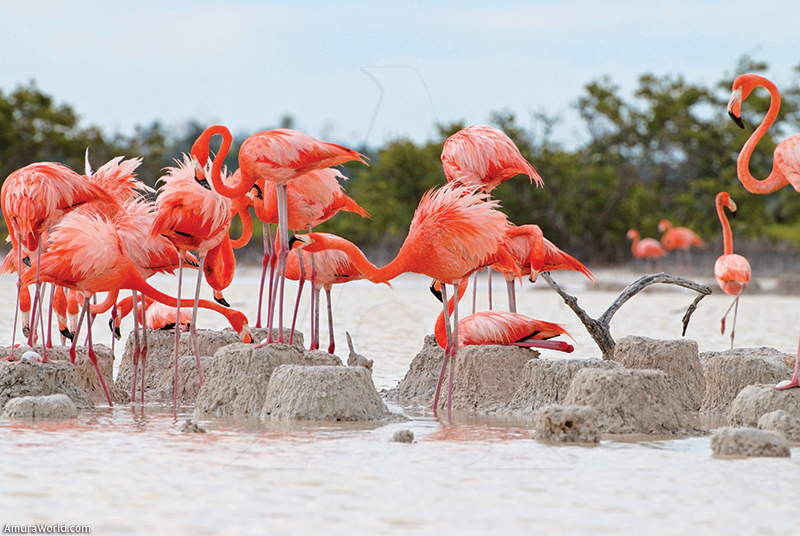 Now with good light, we could see that the nests were cone-shaped and made of sand, clay and shells.  The birds feed on mollusks and algae which they extract from the river beds and have a high organic content.

Fernando chose this date because it is when the egg laying begins with an incubation period of approximately 28 days by both members of the flamingo couple.  The hatching season starts in June and lasts until the beginning of August. Before they take flight for the first time, a very important event called “Children and Hatchlings” is held in which children from various parts of Mexico and the world meet in Cuyo to capture and tag the young flamingos. I recommend it, don’t miss it. The young flamingos make their first flights in July and will have mastered the art of flying by October when they join in the activities of the adults, which is when we will have to return and film and photograph the colony as a whole. 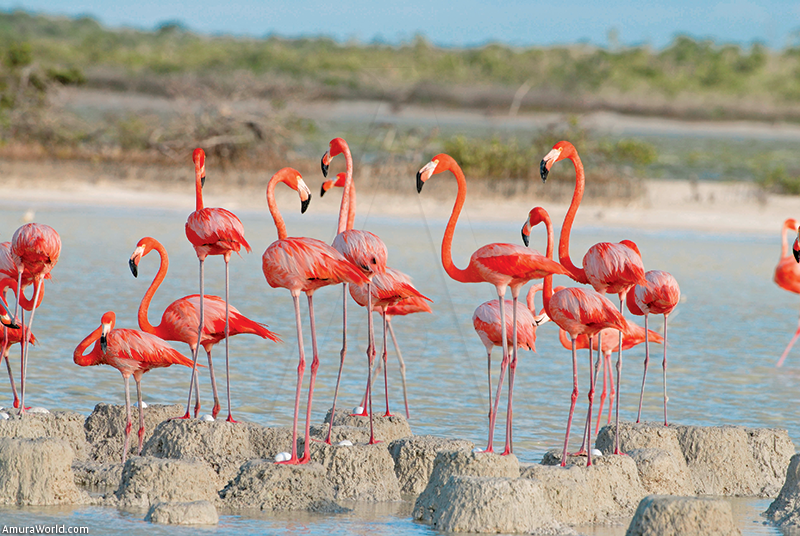 When we arrived, I was surprised by the presence of a raccoon and the paw prints of many other animals, such as foxes in search of the eggs or new-born flamingos to complete their diets. I was also told of the presence of a jaguar, which also causes great harm to the colony.  But, without a doubt, the most harmful presence is human, since for many years, land has captured these rare and beautiful pink-colored birds for sale as ornaments or to use their eggs in the local bakery industry.

It will be a great shame for Mexico to lose this lighted arrow, which are the flamingos of Cuyo, Yucatán, just to please the whims of a selfish few. 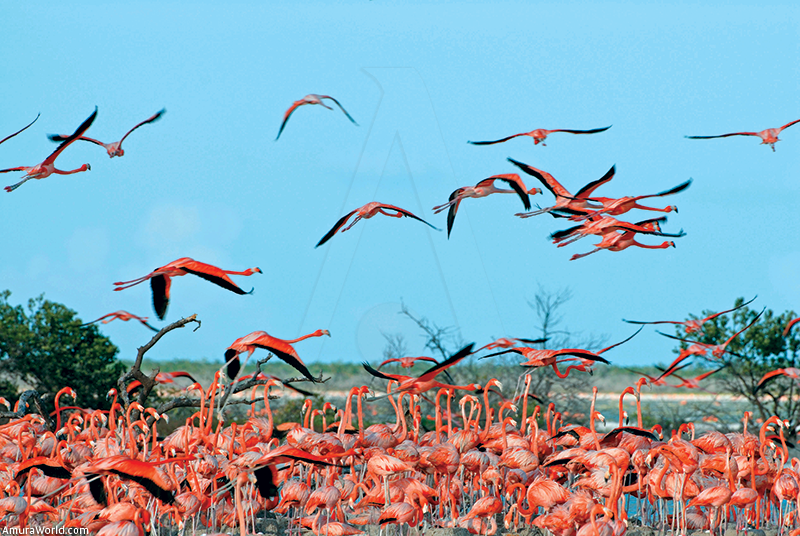 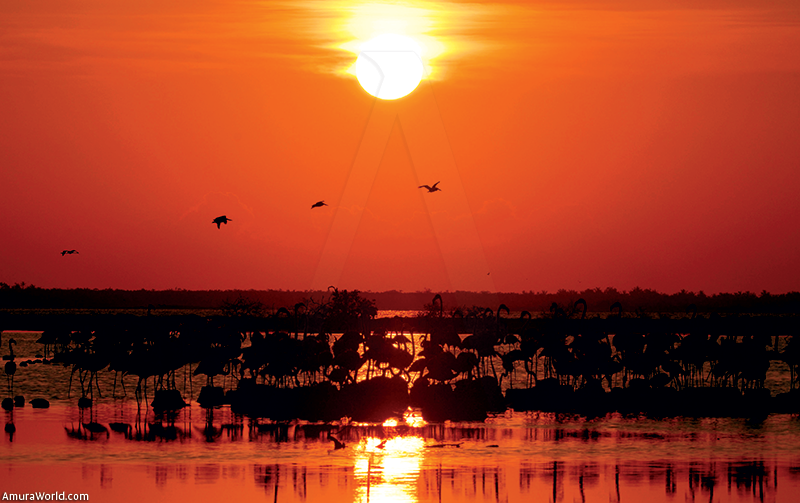