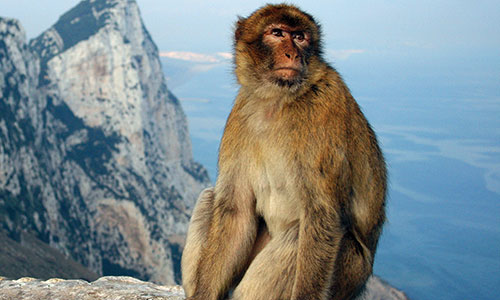 Legend says that as long as the Barbary macaques (macaca sylvanus) remain at the Rock of Gibraltar, it will belong to the British. This is why their presence in Gibraltar unravels countless stories and theories about their possible origin. Some say that they are the descendants of primates that used to inhabit the south of Europe 5.5 million years ago; others say the Moors (or African Muslims) took them there when they crossed the Strait of Gibraltar during the Umayyad conquest of Hispania, which began in 711. Others claim that it was the British themselves who took these primates to Gibraltar in the 18th century, but no one is sure which theory is the right one. Another legend says that they originated in the North of Africa and they immigrated through a 24km tunnel that connected Gibraltar and Morocco. In the end, it doesn’t matter which version is the most accurate, the Gibraltar monkeys have become a true symbol of British identity.

The governments of both Gibraltar and the United Kingdom have worked for the preservation of the macaques at the upper region of the famous Rock that rises at the center of Gibraltar, either out of respect for the species or to keep the legend alive. Curiously, decreased numbers in the macaque population have concurred with historical moments when British sovereignty over this territory was threatened in some way or another. In 1913, a year before the beginning of World War I, the population of macaques had been reduced to only ten individuals, and the governor of Gibraltar, Sir Alexander Godley, imported eight female monkeys from the north of Africa to increase their numbers. Similarly, during the first year of the Second World War, the species was threatened again when it was reported that there were only seven monkeys left, and the prime minister of the United Kingdom, Winston Churchill, ordered for more female monkeys to be taken to the natural reserve at the Rock. In 1944, he established that macaque population should always remain above 24. 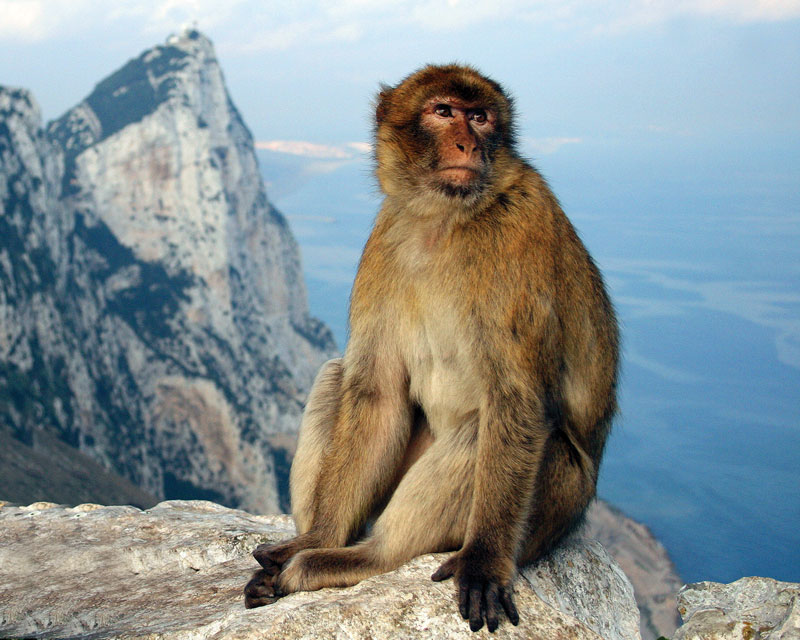 The Barbary macaques have become a symbol of British identity in Gibraltar. 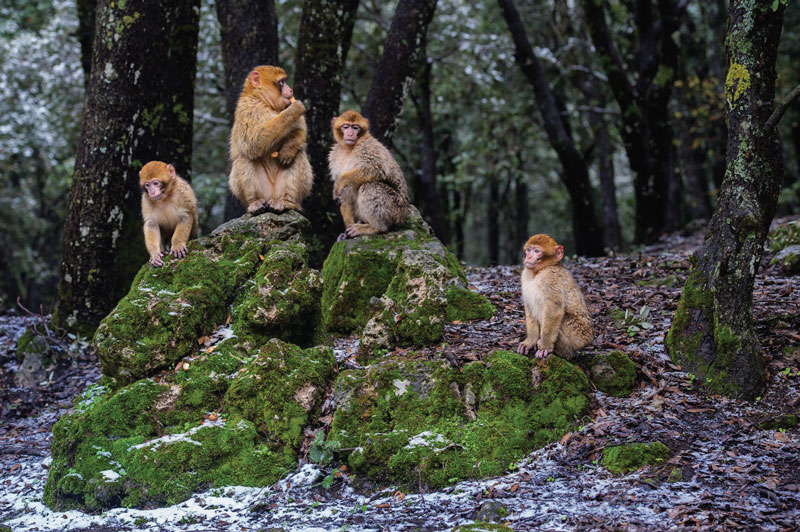 The Barbary macaques inhabit the north of Africa, Asia and Gibraltar. 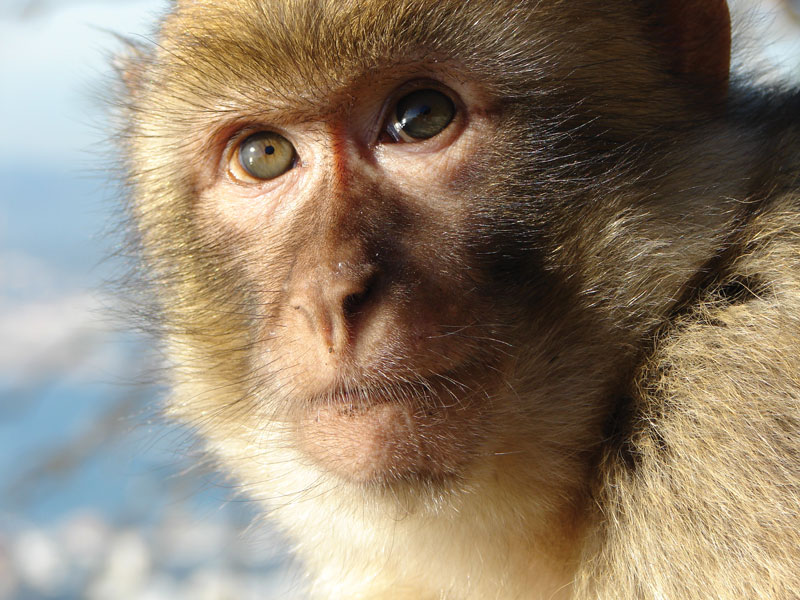 Macaques are known for being social with human beings; however, they can be dangerous. 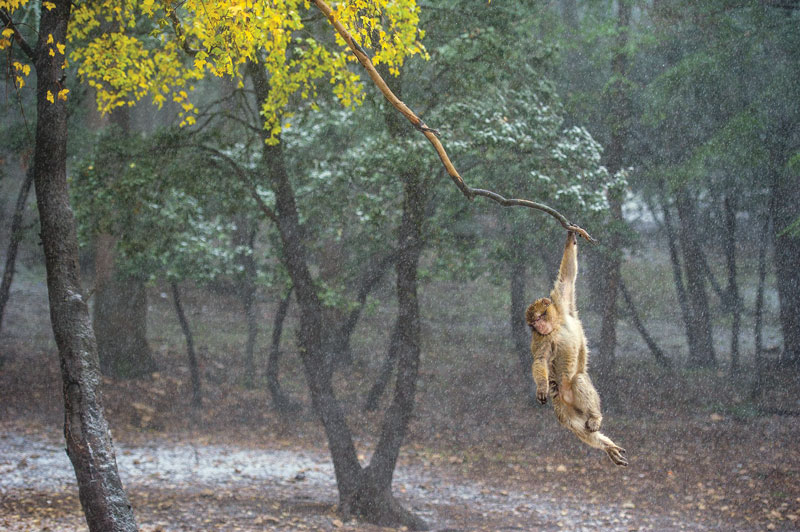 Females measure approximately 55cm and males a little over 1m. They weigh between 10-14kg and their coats range from yellowish tones, to brown, gray and red. 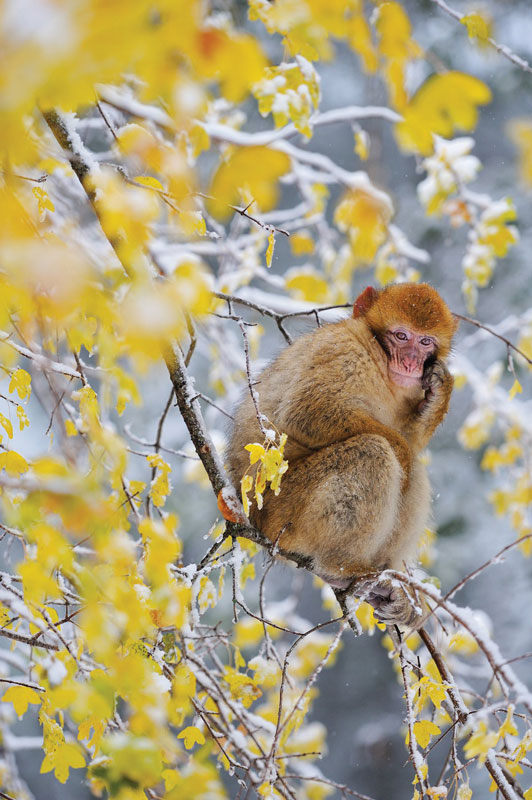 Despite having no tail, the macaques are considered monkeys instead of apes. 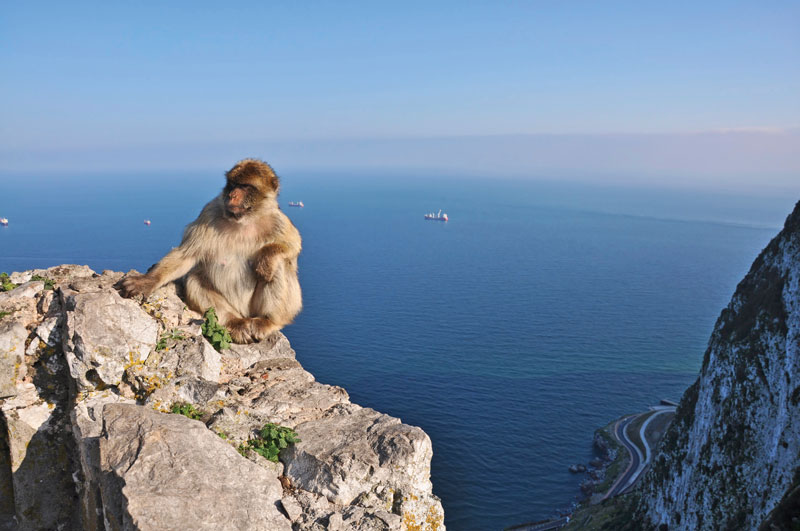 Despite having no tail, the macaques are considered monkeys instead of apes.

There have been findings of Barbary macaque remains beneath the volcanic ash in Pompeii.

The Barbary Macaque depend mainly on mankind for their survival at the Rock. From 1915 to 1991, these tailless monkeys of brownish gray coats were cared for by the British army and afterwards by the Gibraltar Regiment, who were in charge of controlling the population, keeping the monkeys in good health and providing fruits, vegetables, nuts and fresh water. Nowadays, the Gibraltar Ornithological and Natural History Society (GONHS) and the Gibraltar Veterinary Clinic (GVC) run a program for the conservation of the species. Macaques subsist on a diet comprised of fruits and vegetables to supplement what should be their natural food: leaves, roots and flowers, and some others.

This organization keeps a record of pictures and specific traits of each individual within the community of macaques that inhabit the Rock. They measure their size and weight, name them, and assign an identification number along with a chip to each of them shortly after birth. The GONHS is also in charge of keeping the monkeys on the Rock, since some of them go down to the city occasionally to steal food and do mischief. They take a census once a year, and to this day, there are approximately 230 individuals within six groups that vary between 25 and 70 specimens. The macaque population has increased successfully in the previous years thanks to the efforts of the Gibraltarian community. 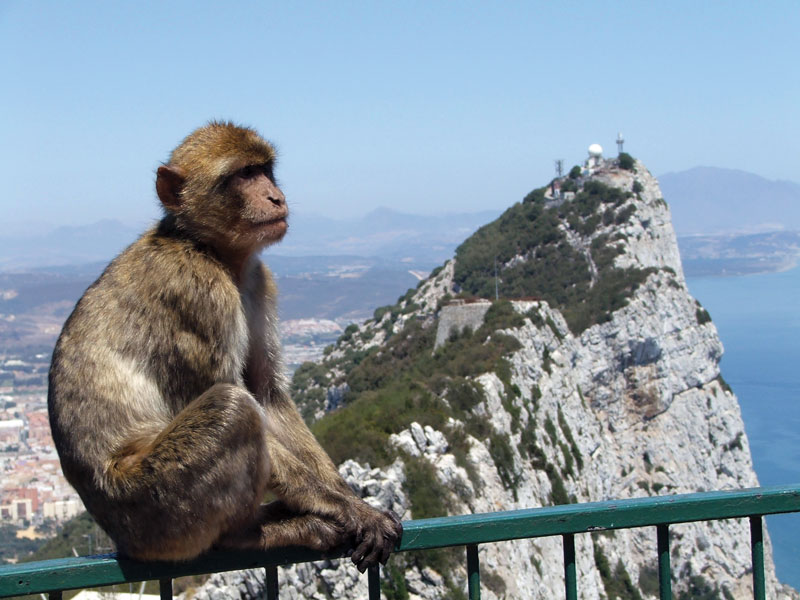 They inhabit the reserve at the upper region of the Rock of Gibraltar. 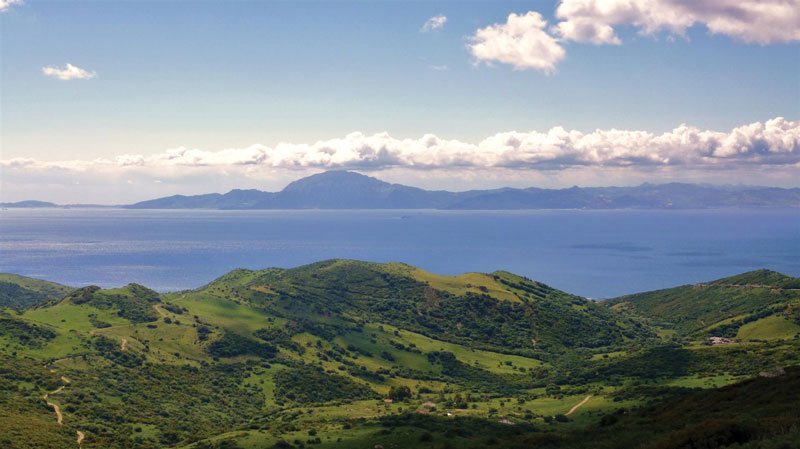 The community of macaques at the natural reserve is protected by the Gibraltar Ornithological and Natural History Society. 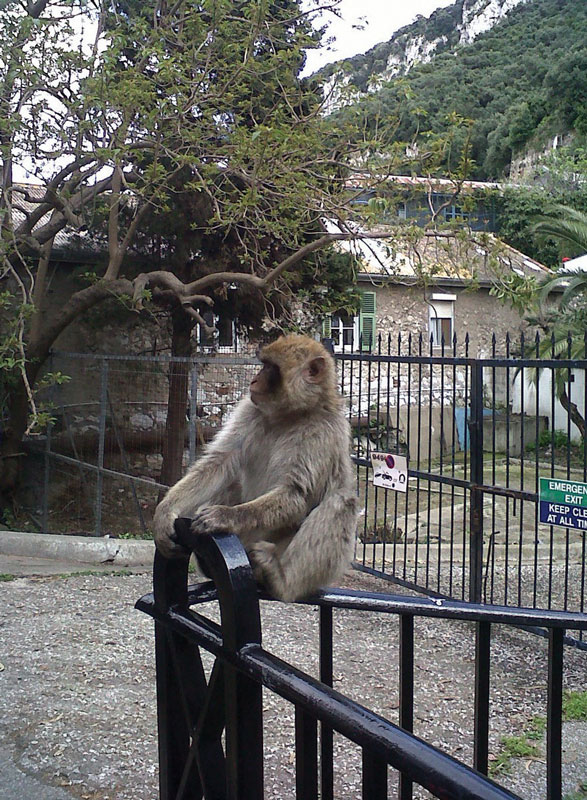 A substantial part of the touristic sector in Gibraltar focuses on visits to the reserve to interact with the macaques.

Due to their popularity and their intrinsic relationship with the British image of Gibraltar, the macaques have turned into a tourist attraction. Queen Elizabeth II and Prince Philip, Duke of Edinburgh, visited the Rock in 1954 with their children, Prince Charles and Princess Anne; photographs of their visit attracted vacationers from all over the world. Ever since, Gibraltarians have benefitted with jobs in the tourist sector. Authorities have imposed rules and prohibitions regarding monkey-tourist interactions; it is forbidden to feed them and anyone who does so will be fined; they have their own diet and processed foods can harm them and reduce their life expectancy. Additionally, it is recommended to give them a wide berth, since they are wild animals and can display unpredictable behavior if they feel threatened. Another important suggestion is to keep good hygiene after having interacted with them. These regulations maintain a beneficial relationship between humans and macaques that has lasted around three centuries.

However, human intervention has damaged this species as much as it has helped them. The macaques that inhabit the upper region of the Rock are the only primates in Europe that live in the wild. But their freedom is conditional and constantly monitored to protect them from the danger of extinction in which they currently are. Macaques have gotten used to human interaction, and their level of trust has, unfortunately, caused problems such as the subtraction of specimens, particularly the young ones, with commercialization purposes or to turn them into pets. Despite this, the macaques of Gibraltar enjoy human contact and the privileges they obtain from living in the reserve, where they will continue to be one of the greatest attractions in Gibraltar. 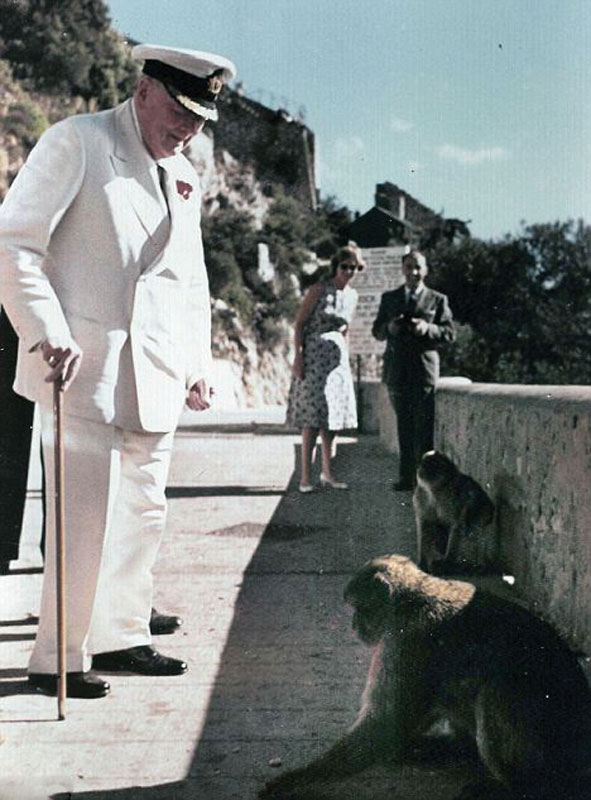 Winston Churchill contributed to the repopulation of macaques on the Rock during the Second World War. 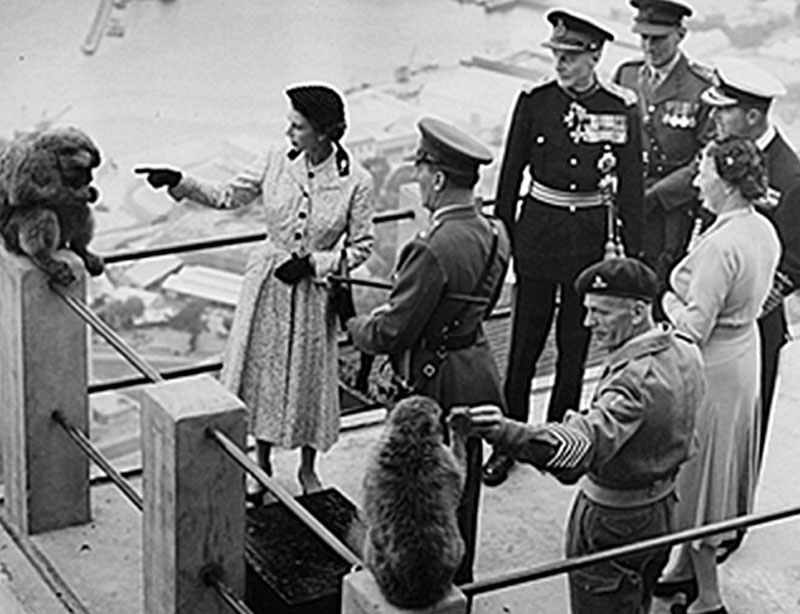 Queen Elizabeth II of England and Prince Philip during their visit to the Rock in 1954. 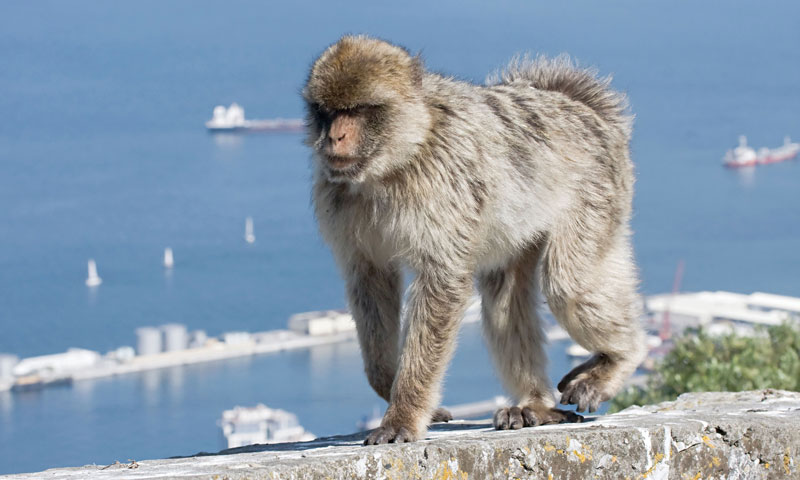 The Barbary Macaque are the only primates that live in the wild in the whole of Europe.