The night was clear and the sky was full of stars; we waited in silence for the radio inside the Lucky Two announced that the strong southern wind had calmed down. We were eager to set out to sea and enjoy a rather comfortable journey for the 60 miles that awaited us from the Port of Progress towards the Scorpion Coral Reef.

The Scorpion Coral Reef is a gigantic, half-moon shaped, coral reef approximately 100 km2 in size, making the corals a natural fortress against the northeastern winds. Inside the coral reef, 64 by 13 kilometer in length and width, respectively, are four islands and one small island.

Similar to many islands in the Caribbean, the Scorpion Coral Reef was only recently created; the sand on its beaches are of a white-yellowish hue, composed of large grains and fragments of algae, shells and corals. 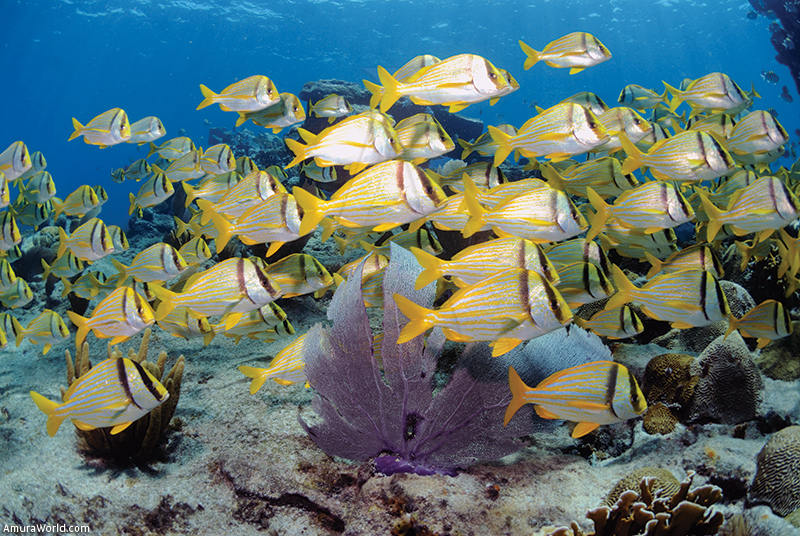 The beaches composed of white sand and rich vegetation, in general, are occupied by species of birds that form nest in the sands and bushes; they island is almost entirely occupied by these animals, and the sounds the produced could be heard from many meters away. Admiring this image had already made the trip worthwhile, but he had come here to explore its oceans and we had little time to cover the entire reef. Harboring an amateurish excitement, we prepared our diving gear and headed where our guide, Nardo López, had recommended us to go.

We broke the surface of the water, which was not very clear, and descended whilst holding the walls of the reef down to a depth of 20 meters, and began our exploration. The first thing that caught my eye was the great variety of coral that dotted the ocean floor, but above all, the quantity of anchors of all shapes and sizes; some quite ancient where you could see the passing of time. When we began our assent to the surface, we found ourselves face to face with a great shoal of anchovies. The number was so large that it blocked our vision and made the ascent longer, although this spectacle allowed us to make a security stop. After this event, we arrived to the island as the sun began to set on the horizon. 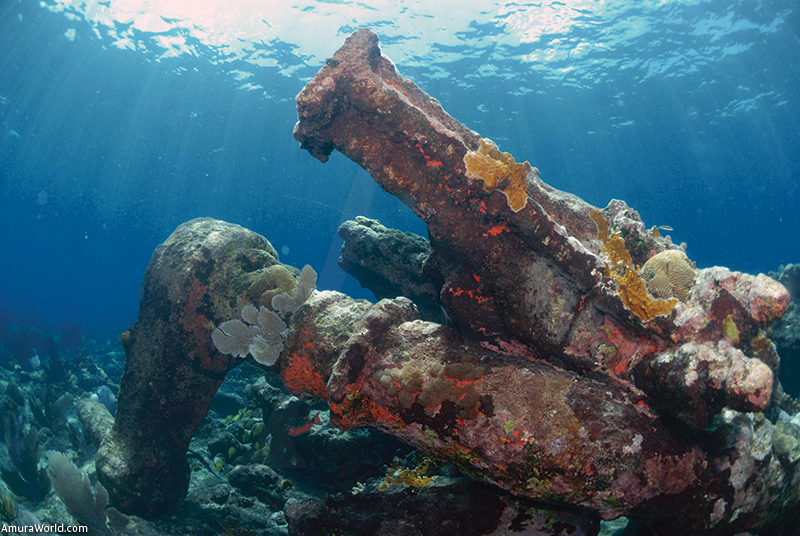 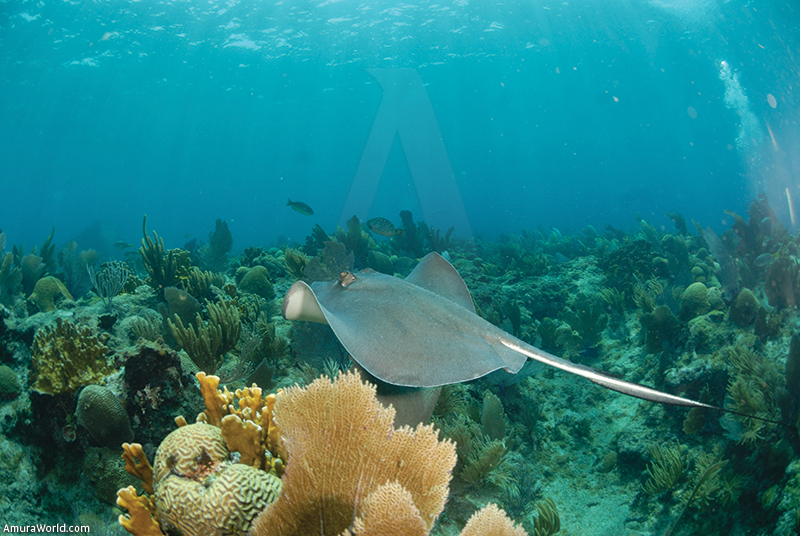 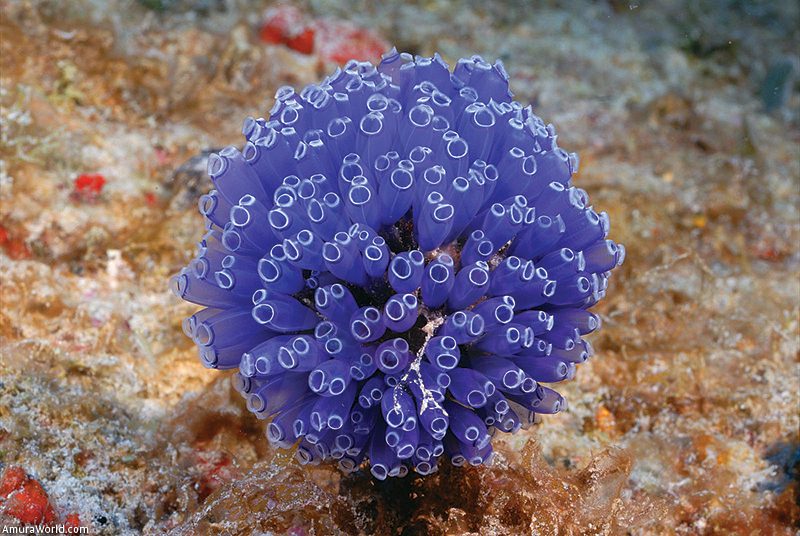 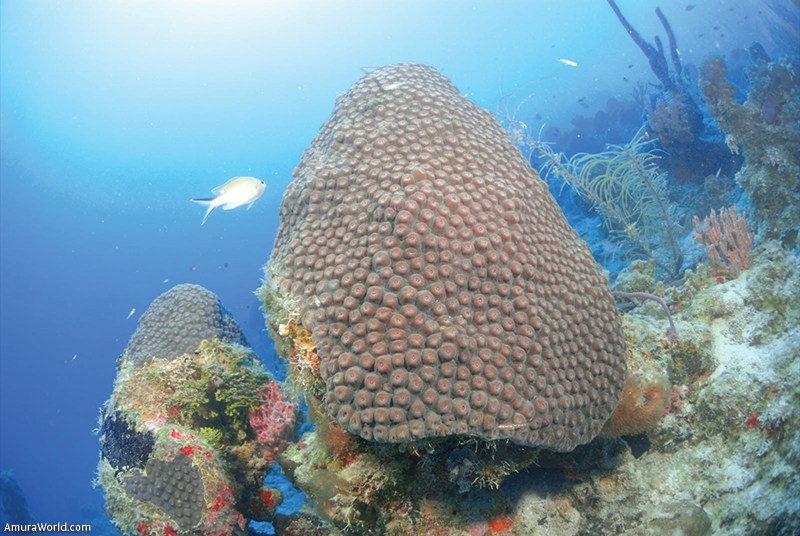 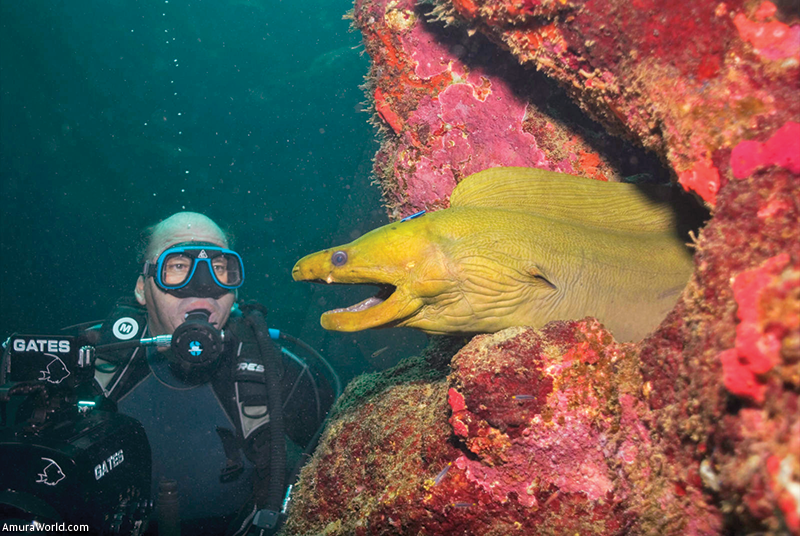 The water at sunrise was clear, fresh and energizing. The sun rays formed a great curtain of light, drastically improving our visibility. The sea, with its deep blue hues, enveloped us, and for a few moments, the enormous shoals of small fish surrounded us in such way that we could not observe our diving companions, who made their way towards gigantic coral valleys that in some cases became so narrow only one of us could pass at a time. The lobsters and green eels became more confident of their presence, while the colorful fishes fed on hardened coral.

We had attempted various dives, and our bodies had now become saturated with gas, thus forcing us to undergo long periods of decompression during deep-sea dives. We were able to observe a spectacle able to make ones heart flutter: the soft coral, of various types, danced for us under the rhythm of the tide. Contrasting with the gray and brown colors of the soft corals and the hanging branches, we observed the blue tunicates, who eagerly awaited for the tides to bring them food.

The Scorpion Reef is known worldwide by the community of divers given the great number of sunken ships that reside under its waters. This was one of the motives that kicked-started our expedition composed by: Rafa Nachon, Chema López, Jorge Loria, Lalo Saint Martín, Luis Gómez, Manuel Sains, Tali Victoria, Jorge Rizo y Manuel Andrade. All of them deeply passionate about diving and exploring sunken ships.

We set out to sea once more following the coral wall and trusting our guide completely. Time passed slowly, and the search was not providing any results, given that the trail had slowly eroded as time passed. 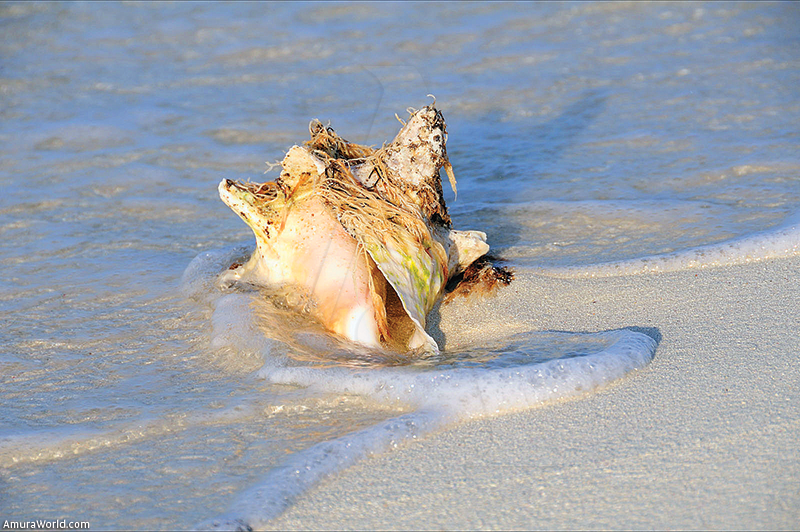 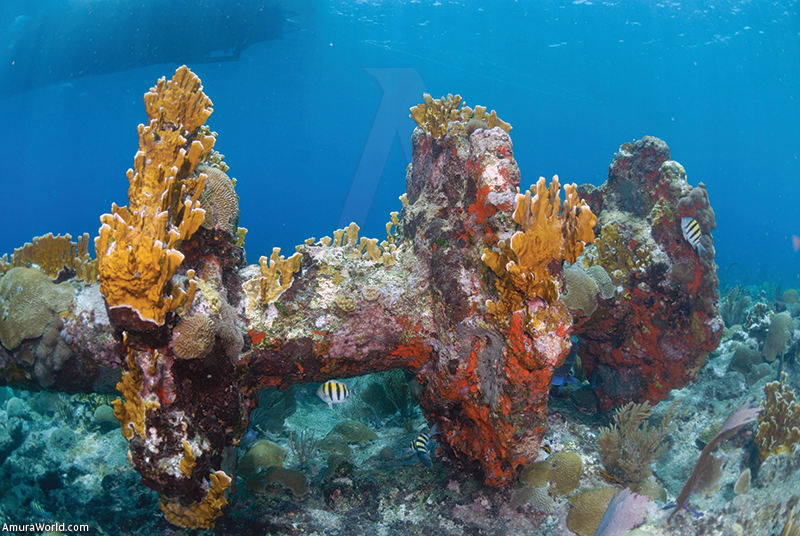 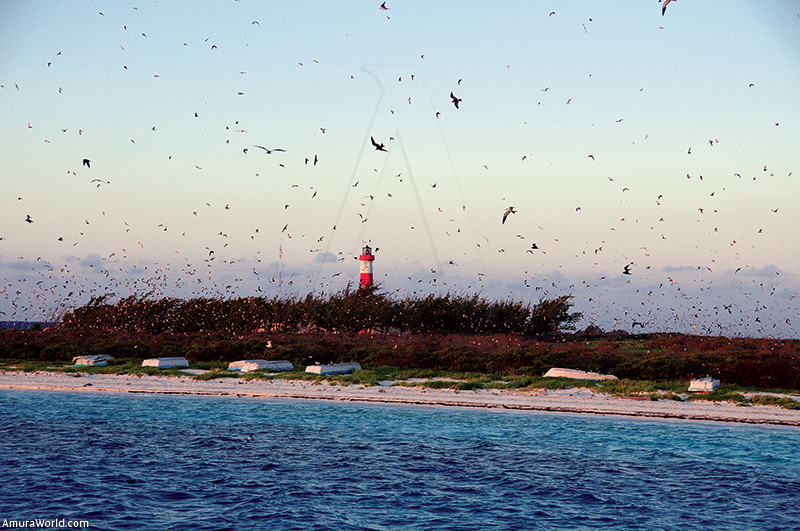 We swiftly prepared our submarine camera and video equipment – in this instance we would not need heavy tanks and other diving gear – given that we would only dive three meters deep. The first thing that caught my attention was the magnificent coral gardens; the sun rays penetrated the immense sea, giving off the sensation that one was inside a great theater.

Little by little we began to observe the pieces of what was once a large cargo vessel: the enormous propellers, the anchors, the crankshaft... and following all these pieces we arrived at the columns made of coral. The sleeping manta ray that interrupted its nap when we arrives rose angrily as we continued our path; further out a yellow wall rose and moved swiftly: it was a great school of clown fishes that gave off the impression of being guardians to an important treasure.

Because of that, the whole group showed itself comforted with remembering and applying this phrase: “Do not take away from the sea, you are only a traveler in these realms, you can observe all and enjoy being here, but one must leave all as it was found.”

The Mexican government, and the private sector, have shown great diligence when it comes to protecting this fantastical place. We urge, dear reader, then, to help us conserve it. 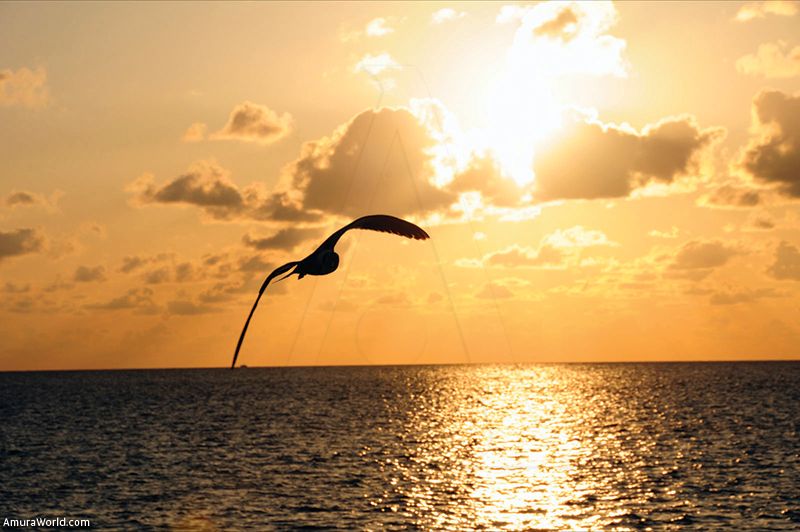 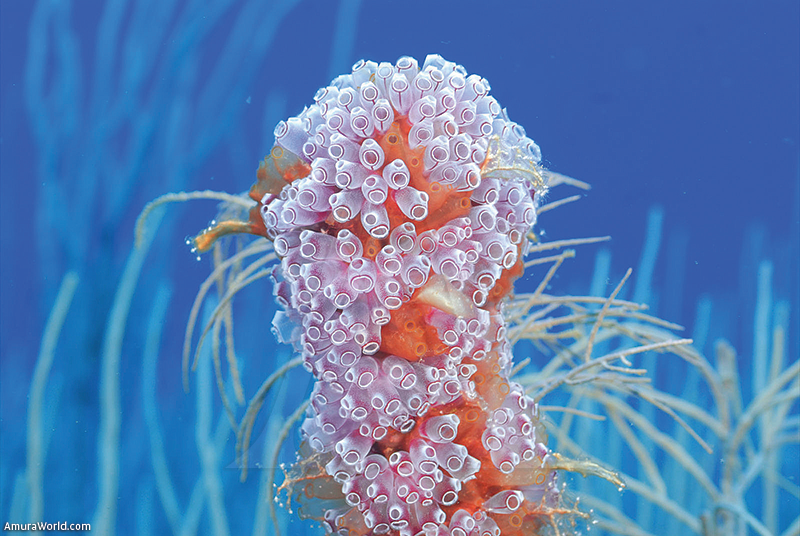 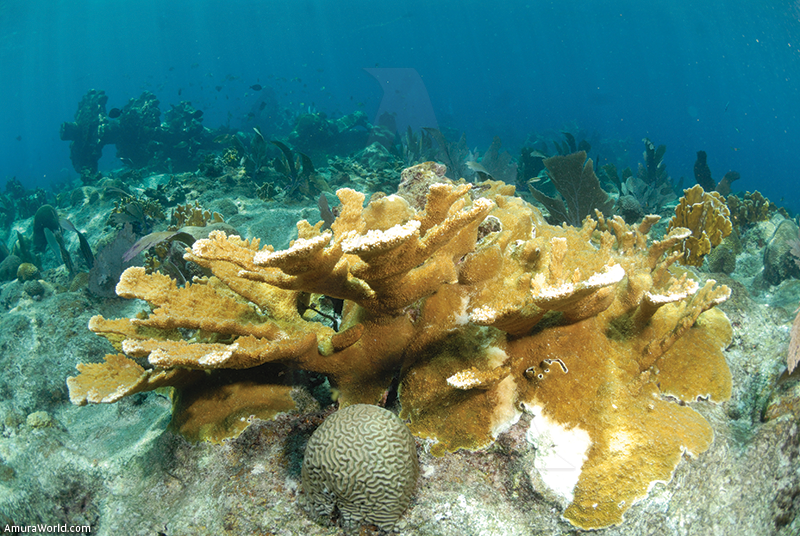 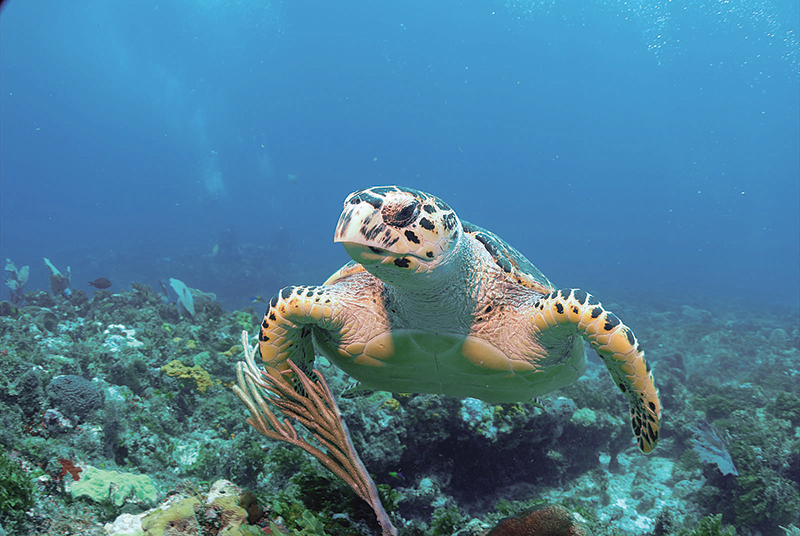