Choppard celebrates its 150th anniversary by presenting one of the major complications of the watchmaking art: The Equation of Time which, in association with the Perpetual Calendar, provides a mechanical reflection of the fabulous dance of the heavenly bodies. Further enhanced with a Tourbillon, this masterpiece of complexity chronometer certified by the COSC and bearing the Poinçe de Genève is issued in a strictly limited edition.

High end watchmaking welcomes a major new reference model: the L.U.C 150 “all in one” watch, admirably showcasing the brand’s in house movement manufacturing expertise as it prepares to celebrate its 150th anniversary. The exceptional timepiece beats to the cadence of the new hand wound L.U.C 4TQE caliber, entirely designed, developed and produced by Chopard Manufacture. It represents a superlative crowing accomplishment of the work undertaken by them since its creation in 1996. 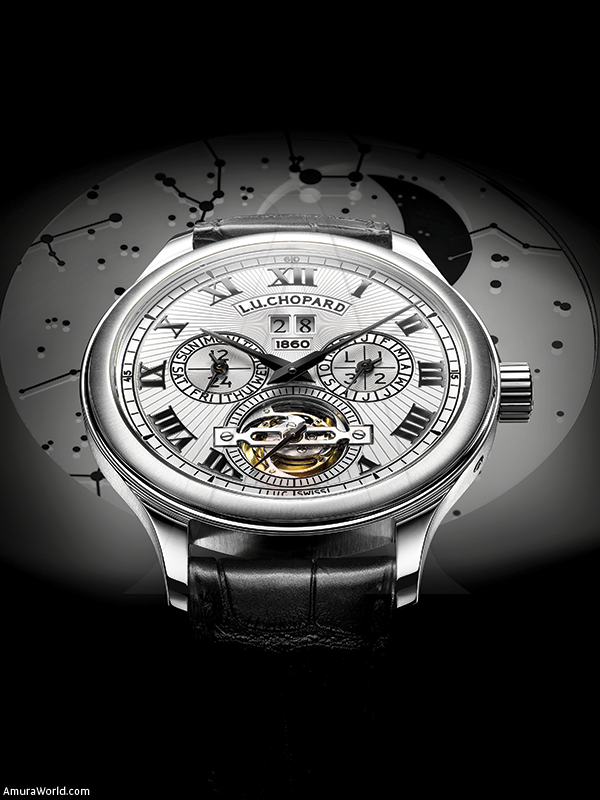 Chronometer certified by the COSC and bearing the prestigious Poinçe de Genève quality hallmark, the L.U.C 4TQE movement houses four barrels endowing it with a seven day power reserve. It powers display of the hours, minutes, small seconds on the tourbillon, a perpetual calendar showing 24 hour indication, the day of the week, the date through a window, the month, the leap year, the power reserve, along with 24 hour indication, the equation of time, sunrise and sunset times and moon phases. Comprising 516 pars and 42 jewels, the L.U.C 4TQE movement beats at a frequency of 28,800 vibrations/hour.

The equation of time shows the difference between true solar time (that of nature) and mean solar time (or civilian time). The Earth follows an elliptical orbit around the sun, and its axis is also inclined in relation to the plane of the equator. This means that the period of time between two passages of the sun through the highest point in the sky (noon) is not the same length throughout the year. It lasts exactly 24 hours just four times a year (on April 15th, June 14th, September 1st and December 24th). For the rest of the year, the elapsed time is sometimes shorter and sometimes longer. The difference between true solar time and mean solar time – which may vary between minus 16 minutes and 23 seconds on November 4th to plus 14 minutes and 22 seconds on February 11th is referred to as the equation of time. The display of this difference between “natural” and “civil” time is one of the complications featured in the new L.U.C 150 “all in one” model.

The 46mm diameter case of the L.U.C 150 “all in one” is crafted in white gold and water resistant up to 30 meter. Vertical satin brushed finishes and lugs with polished tops are part of this renewal, as are the newly shaped hands, the new fonts and the redesigned Roman numerals enhancing the dial.

In addition to the hours, minutes and small seconds on the tourbillon at 6 o’clock, the upper dial displays the perpetual calendar with 24 hour indication and the day of the week at 9 o’clock, the large date window at 12 o’clock, along with the month and the leap year at 3 o’clock.

The new L.U.C 150 “all in one” is fitted with half glossy alligator leather strap with a gold pin buckle adorned with the Chopard logo. It is suited in a strictly limited edition of 15 in white gold, 15 in rose gold and 15 in white gold set with baguette cut diamonds. 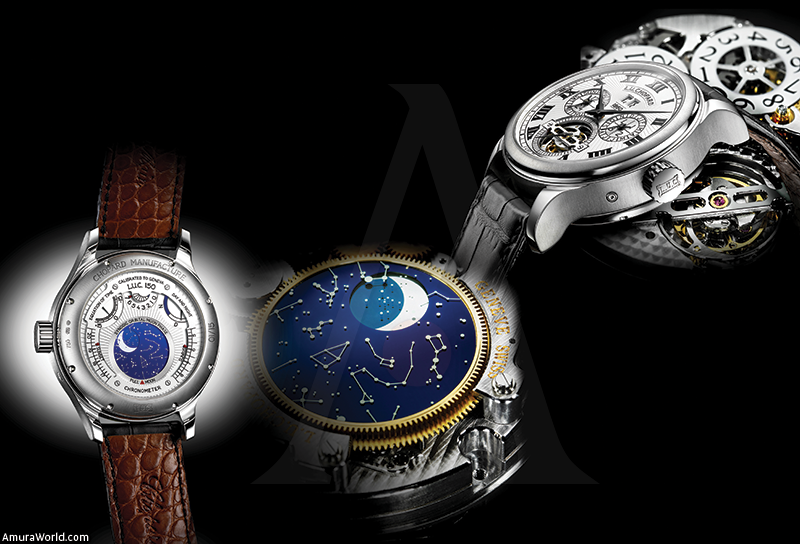