The soul of spanish inspiration

Joaquín Rodrigo was born in Sagunto, within  the Province of Valencia on november 22, 1901. He lost his sight when he was only 3 years old due to complications from Diphtheria. His precocious talent was recognized by local Valencian musicians and his studies were supervised by the notable composer, folklorist and writer Eduardo López. The Spirit of Valencia appears in all the Works of Rodrigo. This spirit evokes the Mediterranean, which is the essence of the races that have populated this historical marineland. Valencia, just as Barcelona is european in its viewpoints and Rodrigo’s biographers have manifested his international tendencies throughout his composing career.

At age eight he studied solfege, piano and violin and moved on to harmony and composition at eighteen. Although he contributed decisively to elevate the importance of the guitar in the  concert world,he never played the instrument. His compositions were written in Braille, and transcribed for their publication. 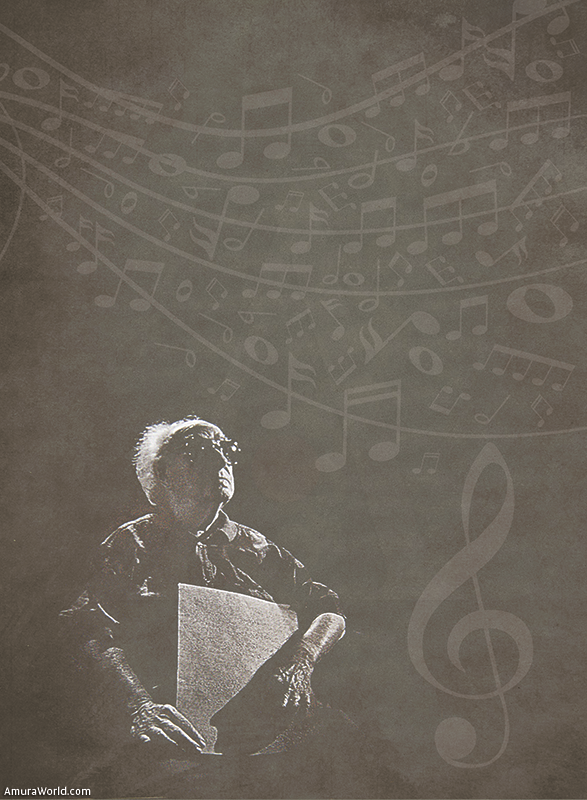 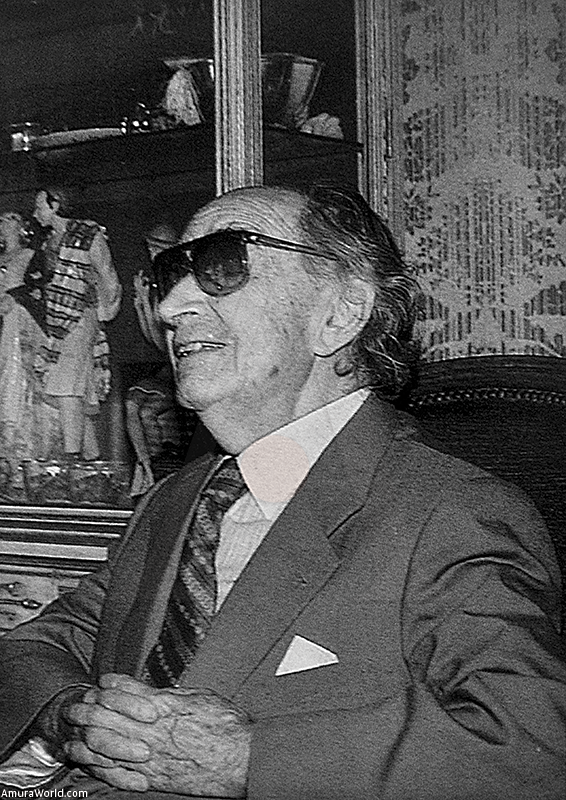 After outstanding  studies in Valencia, he followed the examples of Albeniz, Falla and Turina by  moving to Paris. In 1927 he was accepted at the Ecole Normale de Musique in the class of Paul Dukas, with whom he studied composition up to 1932. Being the favorite pupil of Dukas, it was logical that he was deeply influenced in his musical expressions at that time. During those year Rodrigo was close to Manuel de Falla, who gave his advice and overlooked  his progress. Another musician he admired was Ricardo Viñes.  In 1933 he returned to Spain and was granted the Conde de Cartagena Scholarship, a great honor. He received this recognition obtaining unanimity of votes and it allowed him to continue  studying in in Paris for two more years. He worked with Maurice Emmanuel and Andrés Pirro, specializing in history of music. In this period he travels often to Switzerland, Germany and Austria, composing songs and pieces for piano.

With the outbreak of the Spanish Civil War in 1936 he returns to Spain for the rest of his long life. Occasionally he directs radio programs covering concerts and concentrates on composing. In 1939 he moves to Madrid and becomes famous overnight with his Concierto de Aranjuez for Guitar and Orchestra. Very few compositions have been so warmly received and it established a watermark in modern spanish music. The Concierto de Aranjuez was composed in Paris during the Winter of 1939 and given fine tuning a few months afterwards. The premiere was the following year and the success was so great that it produced a milestone in the world of spanish music. The critics received the new work with unanamious approval and absolute enthusiasm. The date of the premiere became a musical event that went down in the history of Spanish music and one critic said:” Truly, its impossible to find a spanish composition with the exciting and picturesque expressive qualities merged here and complementing each other so vividly”. 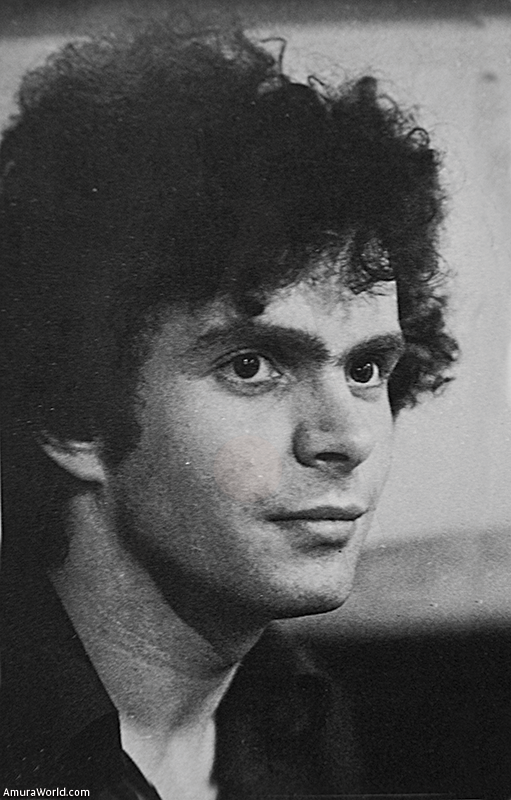 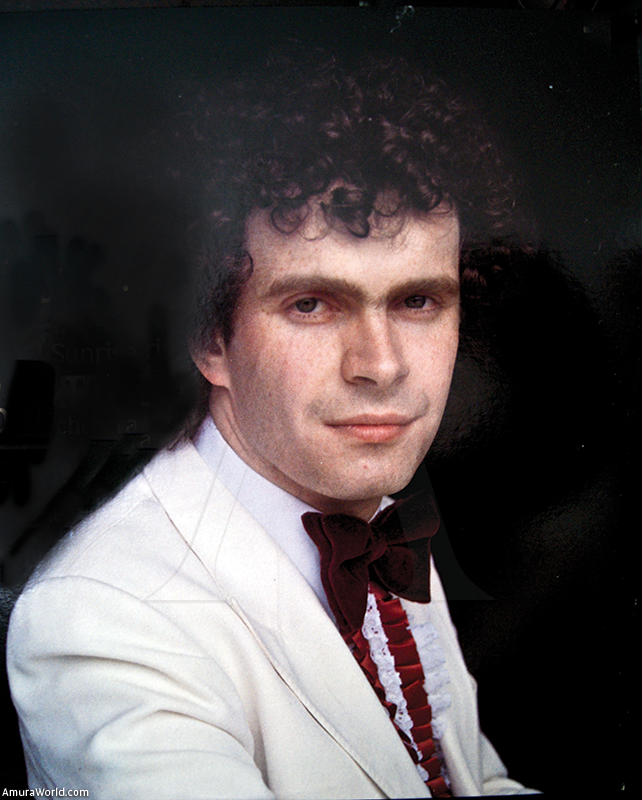 The Concierto de Aranjuez derives its name from the famous royal setting fifty kilometers from Madrid on the road to Andalucía. It was a favorite spot of the Borbons. Although the Concierto is not a programmatic piece, it covers the intention of the composer to recreate a special moment in the life of Aranjuez-the end of the XVIII Century and the beginning of the XIX Century in the Court of Carlos IV and Fernando VII. It was a period subtlety represented by majas, bullfighters and hispanoamerican melodies.

The guitar performs with fearless audacity like a voice standing up to the orchestra piccolo, flute, oboe, english horn, two clarinets, two bass two trumpets and a string quartet. The guitar is the soloist at all times, but the orchestra supplies a fine contrast shinning constantly with transparency.

This Concierto was composed for guitarist Regino Sainz de la Maza. Later on, Rodrigo and his wife shared the sad news that it was composed as an answer to having lost their first baby in a miscarriage. The passion in the second movement expresses a lost love. 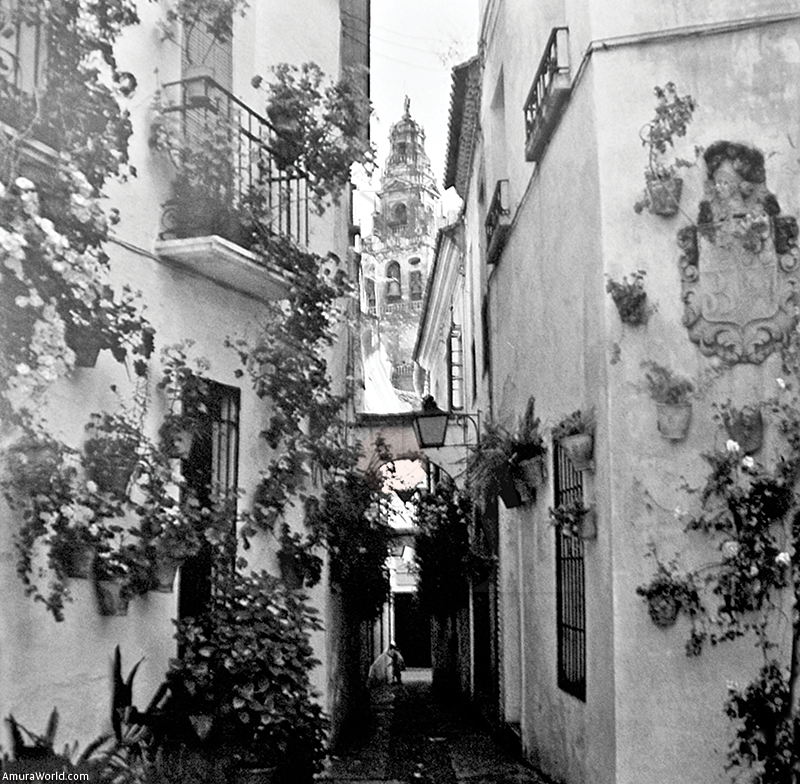 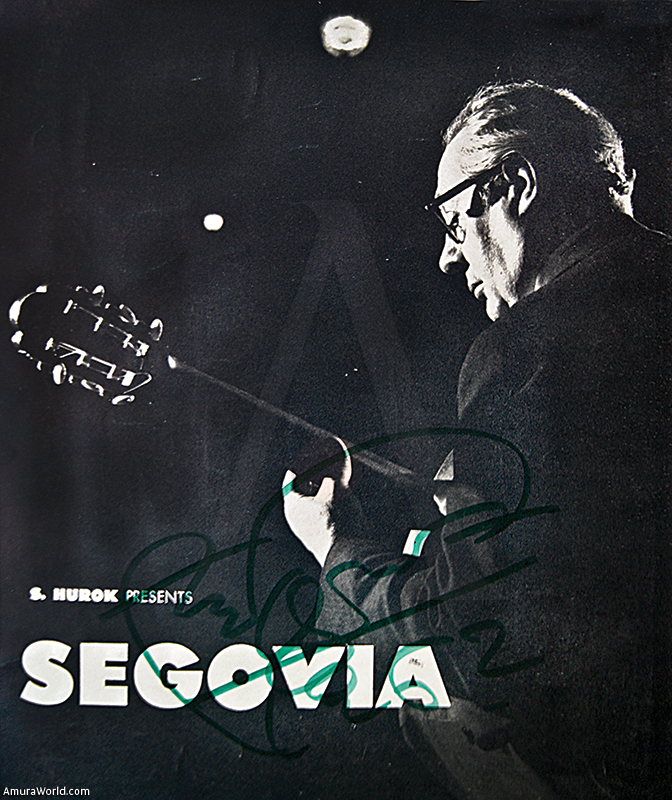 When Rodrigo arrived in Paris he had already written some Works that contain meditarranean warmth such as La Zarabanda Lejana (The distant Saraband), Preludio al gallo mañanero (Prelude for the morning cock and Muy graciosa es la doncella (The maiden is very lovely), These pieces with their sinuous melodies and spanish rhythm, continue the tradition established by the Concierto de Aranjuez, which is a mature composition and amazingly well balanced, exploring new areas of harmony and rhythm and opens new doors in the treatment of the orchestra and the solo instrument. The guitar, despite its arcane and  distant sound  is never submerged in the orchestra, but establishes its individuality and even has conversations with the orchestra.

Like many 20th. Century composers, Rodrigo expresses his fascination with the 18th Century and, like Manuel de Falla, he conducted a serious study of Domenico Scarlatti and Padre Antonio Soler, whose brilliant music contains a fabulous  spanish strain.

Rodrigo describes that the perfect guitar dreamt by the spanish composers was a bizarre instrument, fantastic, multiform, with the wings of the harp, the tail of a piano and the soul of a guitar. This association of tones is infinite due to the fact that it includes gypsy improvisation inspired by Rodríguez el Murciano, that was a model for russian composer Mikhail Glinka(Jota Aragonesa) and the art of an Andrés Segovia.

In the Songs on Castillian Texts (1941) an additional illustration is presented concerning the composer’s balance. With the harmonic progressions he is more subtle and suggests the essence of the Castilian poetry. Here he not only follows the example of Manuel de Falla, who tried to enter the core of the spanish folkloric song, but also the use of Castilian words within the music, following each shade and cadenza as Falla did in the recitative for the child who appears in the episode of Don Quixote (El Retablo de Maese Pedro).

The Fantasía para un gentilhombre was composed in the Autumn of 1940. Joaquín Rodrigo dedicated the piece to the famous guitarist Andrés Segovia, who made a superlative recording of it. Rodrigo usually likes to make comments about his Works and in most of the recordings they are used as notes. In this case he said: “All the thematic material, except for brief episodes is taken from Gaspar Sanz”. This includes a large portion of the harmonic texture. Sanz was employed by Felipe IV of Spain and afterwards by his son Don Juan of Austria. 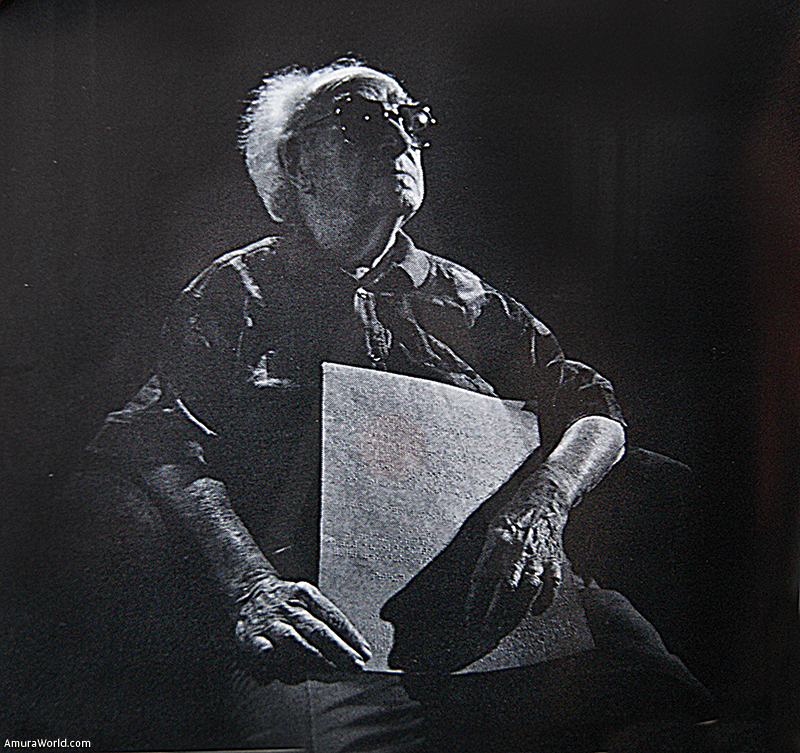 Musical taste has changed gradually in the years between the reigns of Felipe II and Felipe IV. Unlike poetry, music has had to follow public taste and the people are those who make works  popular in the palace festivities. Following the noble grace and gallant pavans followed the lighter style Marizápalos, villains, españoletas, canaries, etc. that were more appropriate to the bustle of popular theater that palatial holiday. The dances written by Gaspar Sanz are base d on these styles and others published in 1667. They are short works, simple and light, a faithful reflex of the taste and customs of the period.

Between 1947-48 Spain and the whole spanish speaking countries  celebrated the fourth century of the birth  of Cervantes and Rodrigo’s contribution to the festivities was the touching choral work with orchestral accompaniment called Absenses of Dulcinea, for bass, four sopranos and orchestra. This work receive the National cervantes Award. It is the reminiscing of a troubadour that recalls the feelings of the Knight of the sad countenance for the ideal woman, the one of his dreams. The work is dramatic,expressive and questioning. The figure of Don Quixote is combined with voices that come out ofhis nostalgic feelings and create a dialogue. 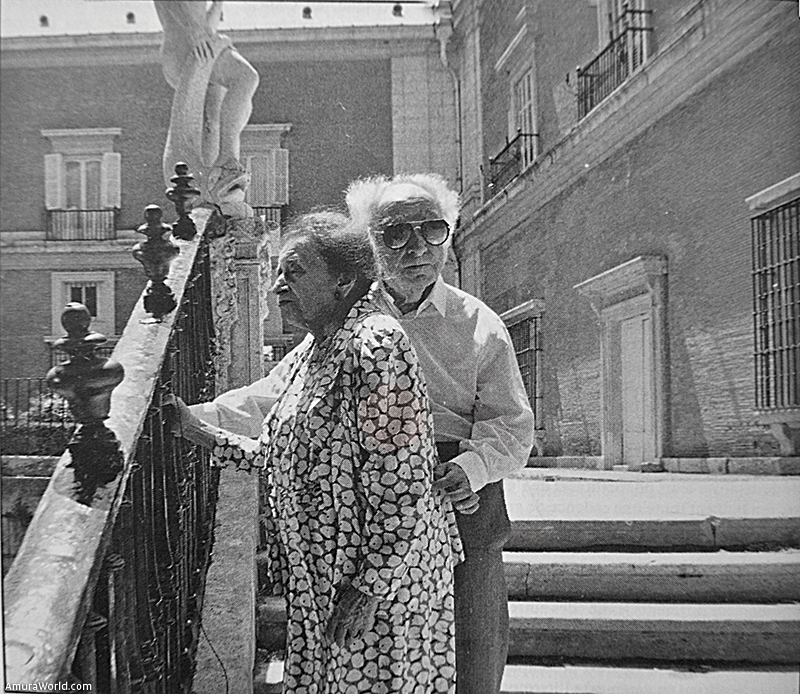 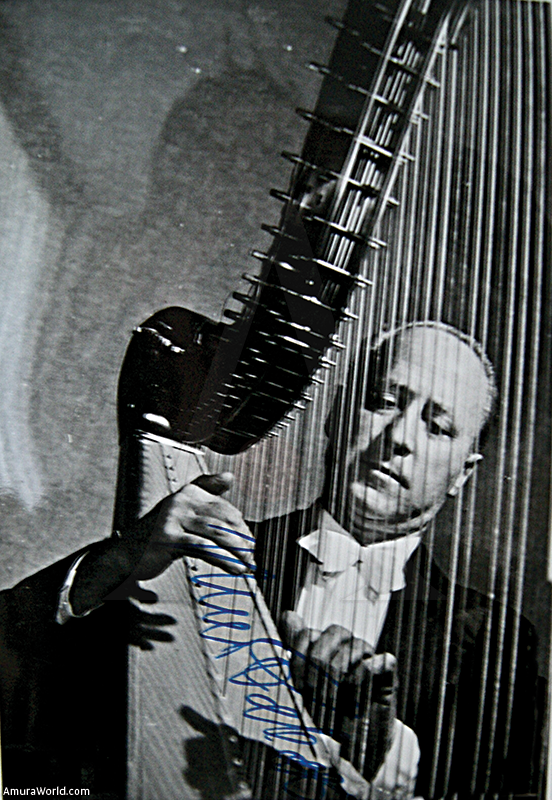 In 1949 Gaspar Cassadó played the premiere for his Concerto for Cello and Orchestra. This compositor contrasts with the previous concertos. It is modern and experimental and when Heard for the first time it produces a negative effect due to the astringent taste that it has within. The central slow movement is a beautiful elegy that enchants our senses.  Also, besides is place as a composer, Joaquín Rodrigo was a distinguished teacher with many conferences and music critic. His biographer Federico Sopeña says:”The musical personality of Joaquín Rodrigo has influenced the intellectual youth of Spain”. As a professor of history of Music at the university of Madrid he had the opportunity to transmit his knowledge to his university students and few have occupied this position and the enormous responsibility it meant was fully understood by Rodrigo. During this period he transcribed the Concierto de Aranjuez for Harp at the request of the genial musician Nicanor Zabaleta, who recorded it  wonderfully.

Rodrigo was incorporated to the spanish nobility by King Juan Carlos I with the hereditary title of Marquis of the Gardens of Aranjuez. He was given the prestigious title of Prince of Asturias in 1996, the highest recognition in Spain. The french government named him Commander of the Order of Arts and Letters in 1998.

He was  married in 1933 in Valencia with Victoria Kamhi, a pianist born in Turkey and who he met in París. Their daughter Cecilia was born in 1941. Rodrigo died in 1999 at the age of 97 years and his daughter inherited the title of Marquise of the Gardens of Aranjuez. Joaquín Rodrigo and his wife Victoria are buried in the Cementary of Aranjuez.

A RODRIGO DISCOGRAPHY, THE SOUL OF SPAIN

-Moreno, London Symphony Orchestra, Bátiz. A fine performance that includes En Busca del Más Allá (In Search of the everafter), Concierto de Estío (Summer Concerto), Concierto en un Modo Galante (Concerto in a Galant Style). Bátiz is one of the foremost conductors of the music of Rodrigo having produced many recordings, some first on the market with fine soloists and excellent sound. (EMI)

One of the oldest recordings and also the best. Yepes explores the subtleties and sonorities reflecting superb taste and musicianship of the composer.(Decca)

Great playing and interplay with the Orchestra.

The only current recording of a superb work played with fire and gusto. 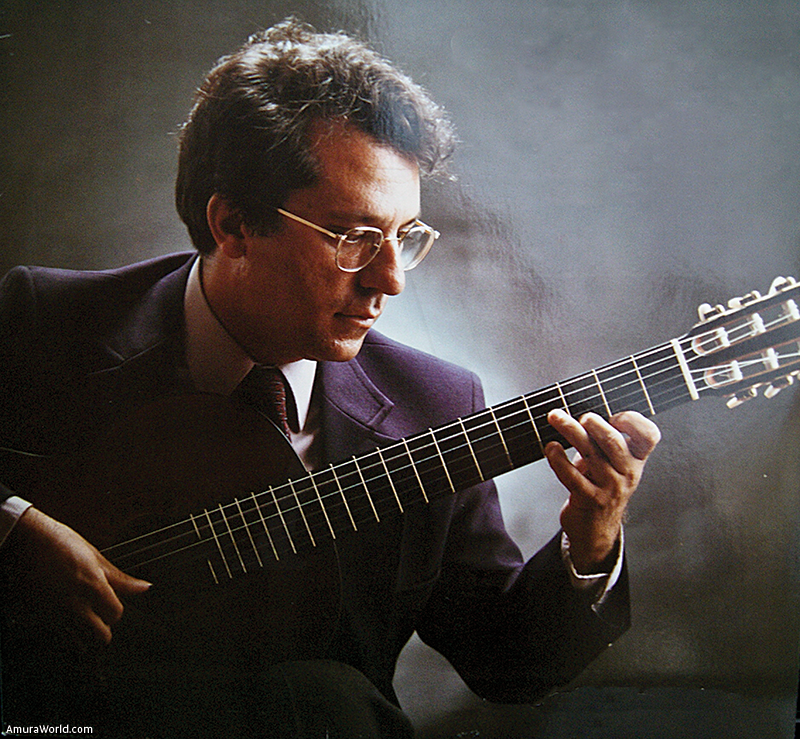 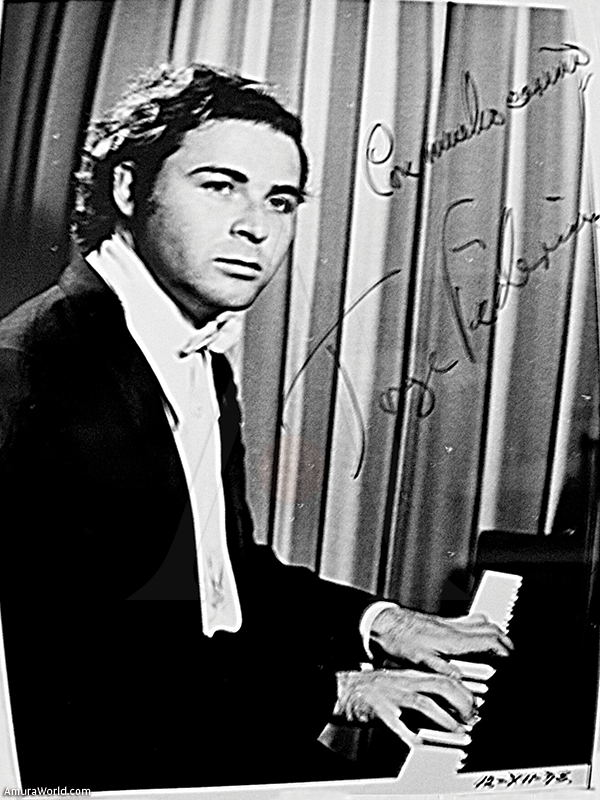 -Once again Batiz proves his command of the Rodrigo idiom. Moreno  and Mariotti are ideal soloists..(EMI)

-Pepe Romero has the authority, technique and heart to give us the best possible.

Nobody we have ever Heard played the harp like Zabaleta, a true prince of the instrument and an artist who knew the composer and loved his music.

A lovely piece played by the master himself, Zabaleta.

Truly definitive. Nothing could be more beautiful than the voice of Victoria de los Angeles seducing us in de Los Alamos Vengo, Delicious!

A definitive performance from the famous guitarist who commissioned the work. A historic moment well captured. 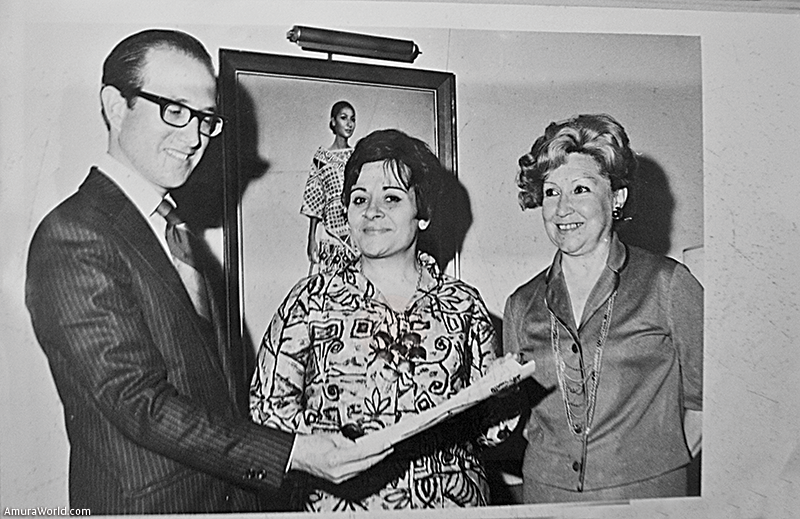 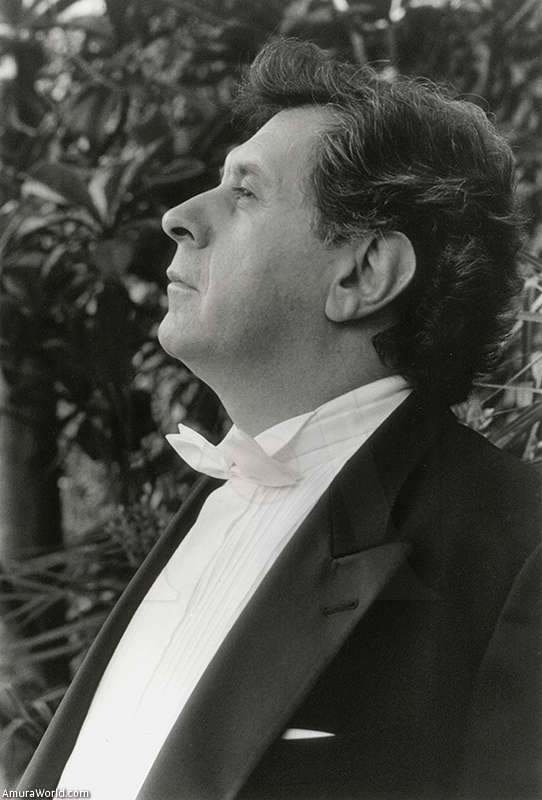