The sea, deep beauty and greatness

Sailing throughout the history of painting

The sea has been object of artistic recreation and matter of inspiration for writers, musicians, painters, philosophers… “The water of the sea cures the sickness of all men”, Greek dramatist Euripides pointed out. We sail throughout the history of art to make ten indispensable paintings stand out which elevated the water, with their symbolic charge and supreme aesthetic category. Matter or principle of the universe, a representation of the abyss, a metaphor of our existential adventure and much more meanings. Baudelaire, the “cursed” poet, wrote a memorable poem “The Man and The Sea”:

Forever, free man, the sea you shall love!

It is your mirror, look, contemplate your soul

it is the ongoing waves of its calmness,

and you shall find deepness in your spirit and bitterness you shall feel. 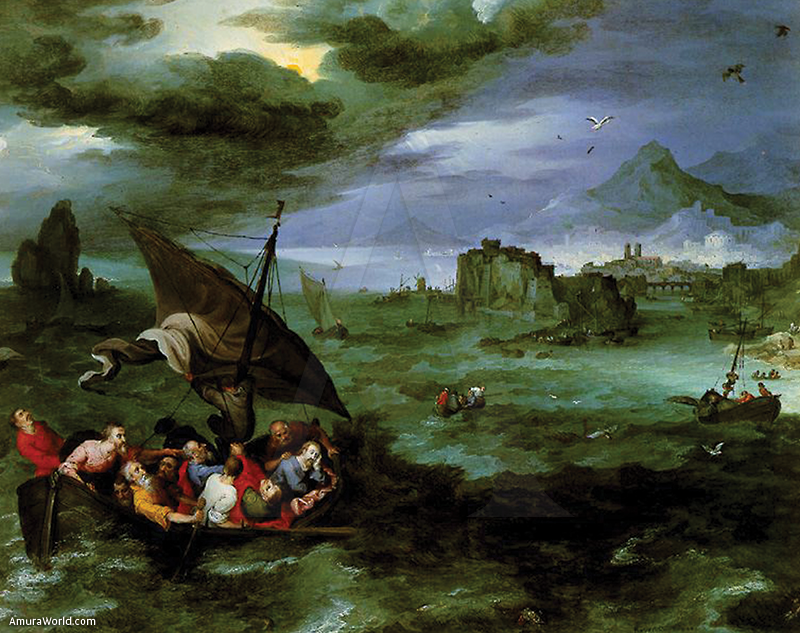 Christ in the storm on the Sea of Galilee

Jan Brueghel (Brussels, 1568-1625) was born in the busm of a family of well known painters, younger son of Pieter Bruegel “The old man”, who is one of the greatest figures of the XVI century and brother of Pieter Brueghel II. Jan Brueghel is famous for his small paintings of history, sometimes created on copper, flowers, allegorical and mythological scenes as well as his representations of Paradise. Since 1606, he became one of the non resident painters in the chamber of the court of the archdukes Albert and Isabel Clara Eugenia, regents of The Netherlands, this position he maintained until his death. He collaborated with important artists, such as Rubens. The great master Rembrandt with “Christ in the storm on the Sea of Galilee” would represent the scenery of another painting in 1633 approximately. 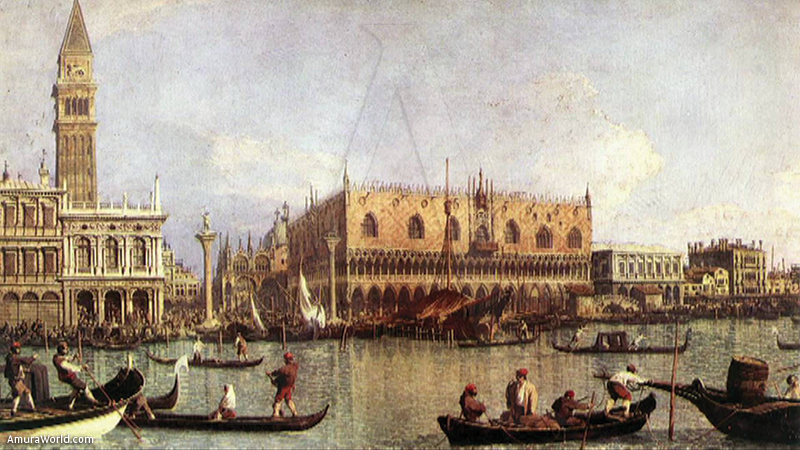 Giovanni Antonio Canal (Venecia, 1697-1768), popularly known as Canaletto. The stamps of his native city where highly valued. The Italian painter started in art by the hand of his father, who was a creator of stage sets for opera and musical theater. This work represents an overview of Major Canal, Piazza San Marco and the Doge’s Palace in Lontananza, capturing a genre scene, and realistically depicted buildings. These paintings were appreciated as prints or souvenirs by travelers of the time. Canaletto had an artistic stay in England, motivated by the numerous commissions from their clients. Venice is a city that seamlessly integrates the water in the urban landscape through its channels. 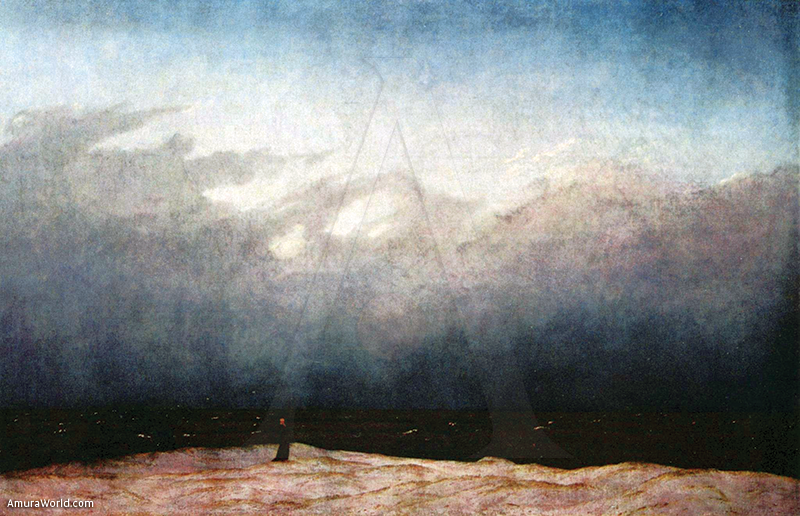 Monk by the sea

Caspar David Friedrich (Greifswald, 1774-1840) worked for two years in this fascinating painting, while he himself was plunged into depression. Since its first presentation to the public, his work was highly valued. His daring aesthetic proposal, despite the apparent simplicity, caused perplexity amongst the German art circles. The young Crown Prince, Frederick William, acquired the painting in the annual exhibition of the Berlin Academy Beach. Sea and sky in a plane, this is one of the more radical proposals of German Romanticism. “Nothing can be sadder and more unbearable than this position to the world: the only spark of life in the wide realm of death, the lonely center of the circle. The box with two or three mysterious objects are presented as the apocalypse”, wrote Heinrich von Kleist when he saw the picture. 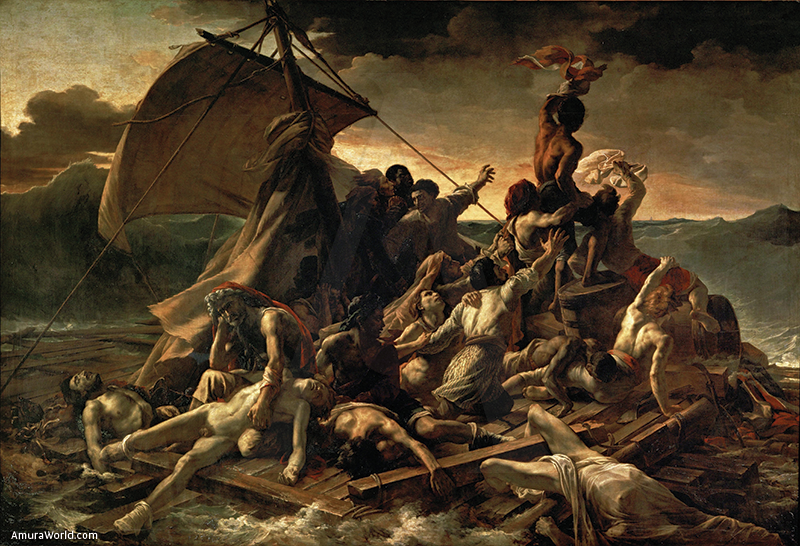 The Raft of Medusa

Jean-Louis André Théodore Géricault, known as Théodore Géricault (Rouen, 1791-1824) was a French painter of singular genius, a short-lived romantic and intense artist. This large artwork of almost five over seven meters shows the dramatic situation after the sinking of the French ship “Medusa”, a captain misled by inexperienced. Near the west coast of Africa, 365 boats found no sufficient passengers rafts to escape the fatal accident. Following the wreck, people built a raft with the timbers of the frigate. 149 people got on it, but only 15 survived. Moved by the sad event, Géricault researched and conducted interviews with two survivors to carry out this work. He visited the morgue to discover the color and the relief of the dead and built a raft to carry out a scale reproduction. 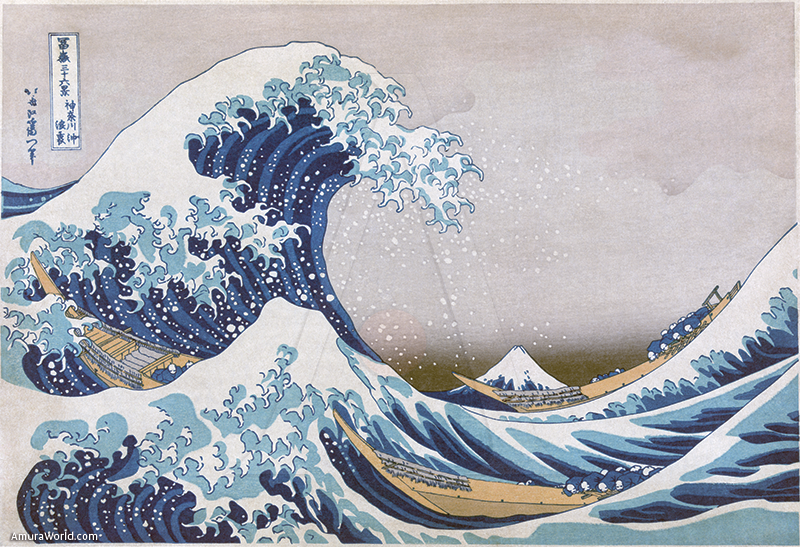 In this selection, a sample of Asian art could not be missed. In the genre of Japanese prints this is the most popular and well-known image in the world. It is located in western collections of various museums, including the British Museum in London, the Metropolitan Museum of Art in New York and the National Library of France. This picture is the first of the series by Japanese artist Katsushika Hokusai (Edo, now Tokyo, 1760-1849). His series “Thirty-Six Views of Mount Fuji” became popular throughout the nineteenth century. Hundreds of copies reached the hands of artists and collectors thanks to travelers. The colorful juxtaposition so marked and the wavy lines show the mastery of the Japanese printmaker and painter. In the background, we see the volcano, whose tiny proportion highlights the strength of the sea, which threatens sailors. 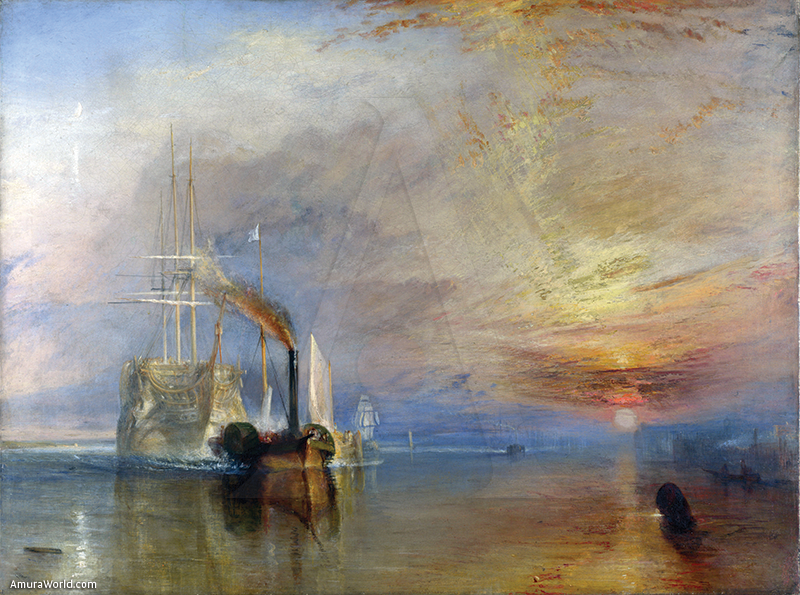 Joseph Mallord William Turner (London, 1775-1851), the great painter of light, known for his previous style of Impressionism. William Turner had sixty years when he painted this masterpiece. The ship played a prominent role in Nelson’s victory at the Battle of Trafalgar in 1805. This vessel remained in service until 1838, when he was discharged and nestled at the Port of Sheerness, west of Rotherhithe. The mastering the techniques of painting is reflected in the beautiful suggestion of sea and sky. The scene depicts the sun rays hitting the clouds. The coloring is spectacular. It contrasts with the sense of loss of the old warship, drawn by the modern steam tug, smaller and prosaic. 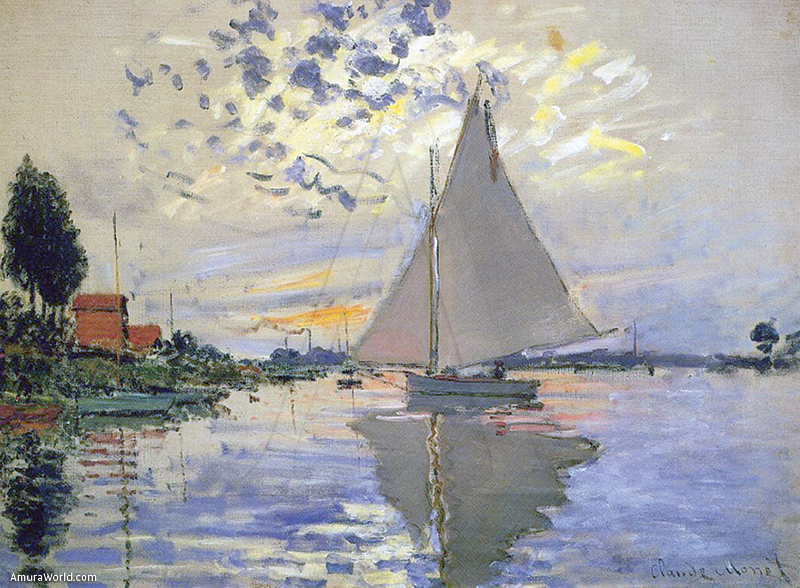 Oscar-Claude Monet (Paris, 1840-1926) reflected on the canvas countless beautiful landscapes full of color. In his paintings, nature is a fundamental motive. Master impressionist realism breaks the boundaries between subjectivity and objectivity. Water is a constant in different representations: regattas, boats, beaches, swimmers, aquatic plants ... In the early twentieth century, the painting was beginning to break down the drawing and their profiles on the basic components of light and color, anticipating the abstraction and the most experimental avant-garde movements. Painterly strokes Monet uses thick, sometimes violent, gain depth and perspective create masterfully, in contrast to the shadow projected on the water sailing. 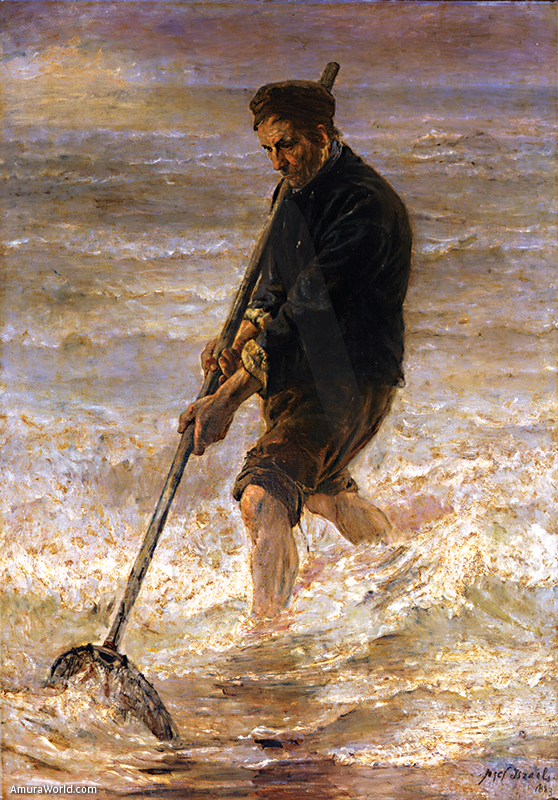 Almost life-size, this work overflows with composition. Planted firmly on the swell of the  beach, the fisherman tenses his body, gets the net to collect and track fishing. The sea and sky join together in the image. Jozef Israëls (Groningen, 1824-1911), Dutch painter of Jewish origin, stamped in his palette a strong romantic spirit, inclined his taste for the human figure. In many of his compositions he reflected a melancholy and an anguished vision of existence. He was awarded two prizes for his paintings at the Universal Exhibition in Paris in 1900. Critics compared his impasto brushwork, his warm colours and his use of chiaroscuro with the work of Rembrandt. Israëls taught numerous pupils, among them his son Isaac, painter as well. 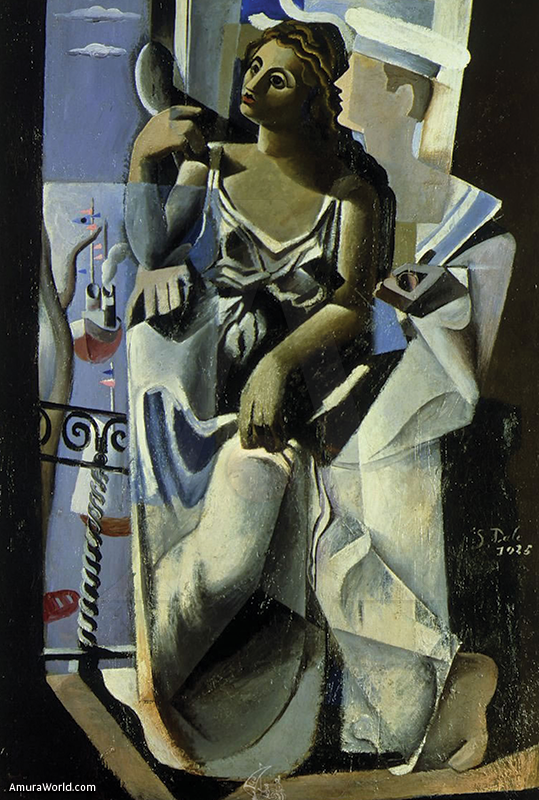 Salvador Dali (Figueras, 1904-1989), major figure of twentieth century art, conspicuous representative of surrealism, painting fanciful and imaginative. In this work he brings us two paradigmatic characters closely linked to sea stories. On one hand, Venus, goddess of love, represented brilliantly by Botticelli in the famous “Birth of Spring”, emerging from the sea, and on the other hand, the legendary figure of the sailor, mythologized by stories like Jason and the Argonauts. From a thoroughly modern point of view, Dalí depicts a sailor and prostitute in a brothel near the port. The table presents cubist lines, voluminous shapes that represent the world sublimated love and eroticism in this nightspot. This work of art is a tribute to Dalí to the forefront Catalan poet Joan Salvat-Papasseit after his death. 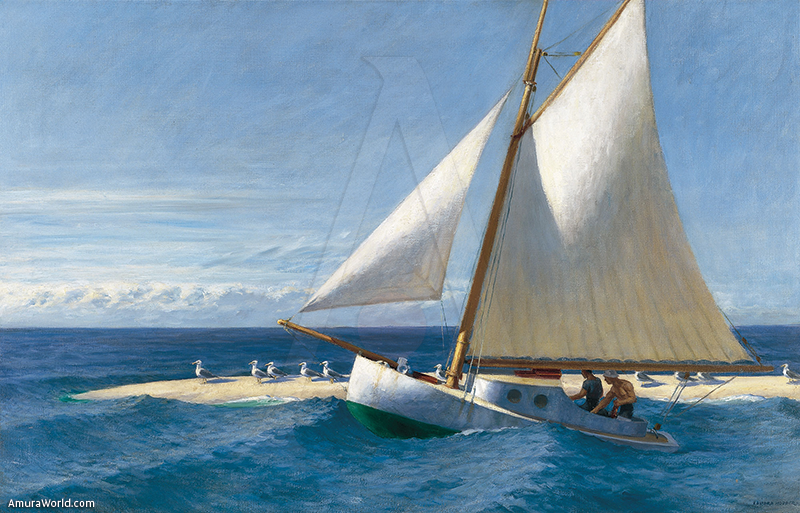 Edward Hopper (Nyack, 1882-1967) was famous for his portraits, magnificently illustrating life in solitude. However, besides the images of New York, his palette also took the views of the cliffs and beaches of New England. In this work, realistic cut, the sharpness of the shapes and bright colors pervade an air painting “pop”. Hopper describes a quiet summer morning on Cape Cod next to sand, the ship breaks the gentle surf without further violence. The coolness of the blue tones create an attractive game with light and white candles. The low background of the sea and the predominance of sky with clouds in the distance remind a composition of the seventeenth century Dutch painting techniques.