The nine genesis scenes A work that overwhelms its visitors

To contextualize the work of controversial artist Michelangelo, which is recognized as the purest manifestation of divine power and its representatives on Earth; worth remembering that the Vatican, which protects this universal heritage, is the smallest country in the world. In just an area of 44 hectares, hosts some of the most important works of history and art.

With barely 900 inhabitants, it has an official league the Latin as well as its own currency and its maximum authority and head of state is the Supreme Pontiff or Pope. 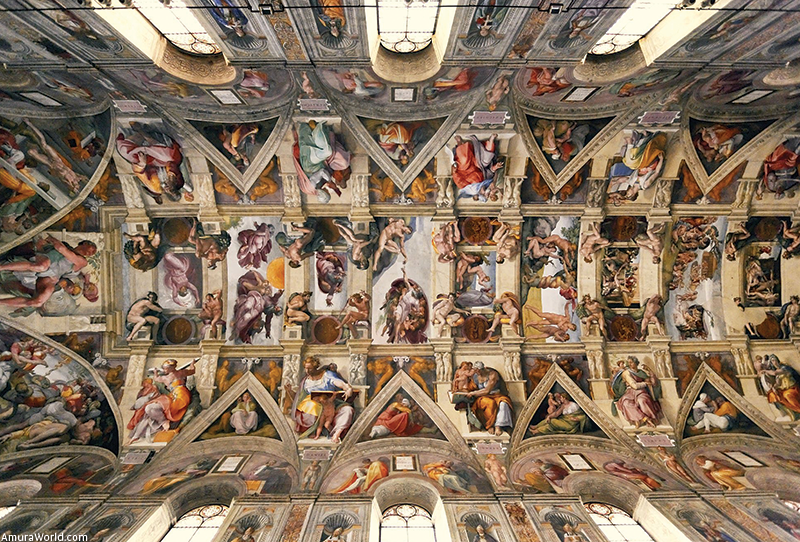 The legacy for humanity

One of the main buildings of the Vatican, or at least the most famous, is undoubtedly the Sistine Chapel. The first Mass in the Sistine Chapel took place on August 15th, 1483, which was consecrated to Our Lady of the Assumption.

Its name receives it from Pope Sixtus IV (1471-1484) who ordered to restor the old Cappella Magna. The decoration of the walls was conducted by painters like Sandro Botticelli, Domenico Ghirlandaio, Cosimo Rosselli, Lucas Signorelli, Pietro Perugino and Pinturicchio. Pope Julius II, for his part, commissioned to Michelangelo the ceiling decoration that was made between 1508 and 1512. The Last Judgement, painted on the altar wall between 1536 and 1541, it also was made by him.

In the central part of the ceiling Michelangelo represented nine stories of Genesis divided into groups of three. These relate the origin of the universe: Separation of Land from Sea, Creation of the sun, moon and planets and Separation of Light from Darkness; origin of man: Creation of Adam, Creation of Eve and Original Sin and Original Sin and Banishment from the Garden of Eden; and origin of evil: Sacrifice of Noah, The Flood and Drunkenness of Noah. All of them framed by paintings of prophets and sibyls, the ancestors of Christ and representations of some episodes of the salvation of Israel.

The Last Judgement is centered on the figure of Christ represented in the instant that gives the verdict on judgment day, next to him is the Virgin, both are surrounded by some saints who are awaiting the verdict, among them it can see St. Peter with two keys, St. Bartholomew with his own skin, St. Catherine from Alexandria with a cogwheel and St. Sebastian with arrows in his hand. In the central part below, the angels of Revelation awake the dead, to the left are the resurrected who are ascending to heaven and to the right those who have been condened. 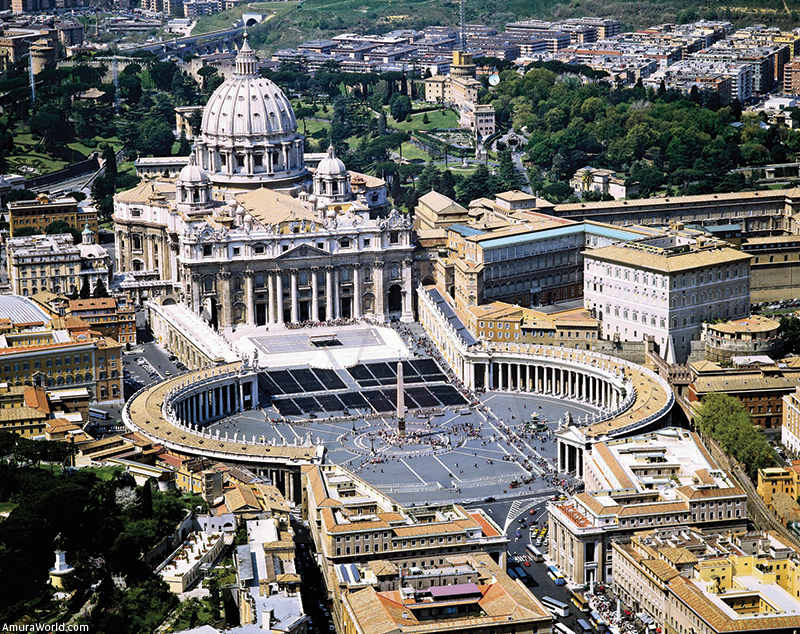 The nine scenes from Genesis

Painted on the central part of the ceiling, nine fresh are shown longitudinally starting with the first (from left to right), which coincides with the altar wall (where the Last Judgment is) and ninth is located towards to the entrance wall; alternately, the frescoes –which could be considered odd numbers– are bordered by medallions, each one hold up by nude figures. These nine paintings are divided into three groups representing the same number of meanings; the first three (from left) mean Separation of light from darkness (Genesis I, 4) Creation of the sun, moon and planets (Genesis I, 4), and Separation of Land from sea (Genesis I, 9); the following three relate to the Creation of Adam (Genesis I, 26), Creation of Eve (Genesis II, 21), and Original Sin and Banishment from the Garden of Eden (Genesis II, 4), and the last three, refer to the wickedness of man with the Sacrifice of Noah (Genesis VIII, 20), The Flood (Genesis VII, 18) and Drunkenness of Noah (Genesis IX, 23). 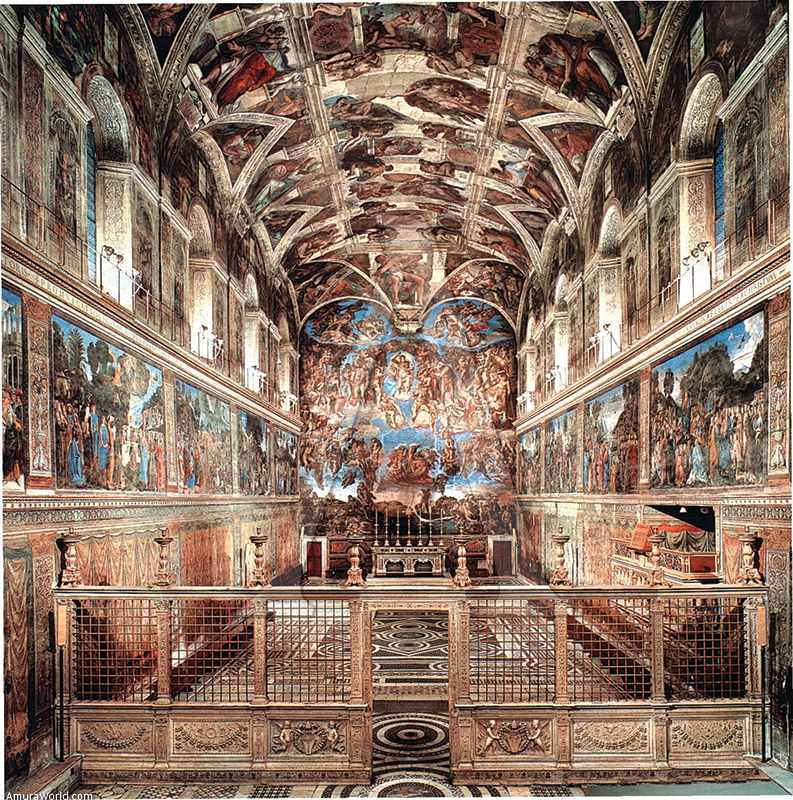 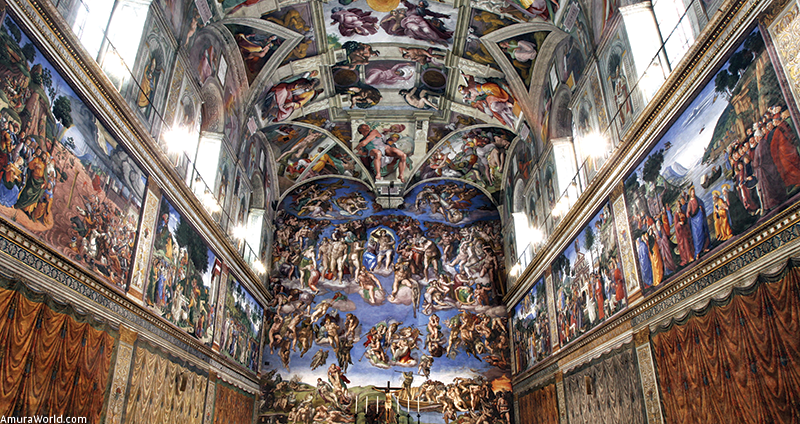 The most famous of the Apostolic Palace

This magnificent work, however, received several criticisms. At the beginning, this altar wall contained Perugino’s frescoes that had to sacrifice so that Michelangelo painted his work. Furthermore, the fact that many characters appear nude caused controversy for years, until in 1564 the Congregation of the Council of Trent decided to hire Daniel of Volterra to cover some of the figures.

Also, the north and south walls contain other biblical scenes including the life of Christ and Moses. The series of the Pontiffs extends to all the walls of the Chapel, they are located in pairs within niches. On the entrance wall the final of stories of Christ and Moses are illustrated: on one side Resurrection of Christ and on the other the Discussion over the body of Moses. The original frescoes were work by Ghirlandaio and Signorelli, both were destroyed when the architrave of the door collapsed in 1522 and were replaced by paintings by Hendrik van den Broeck and Matteo da Lecce with the same subject. 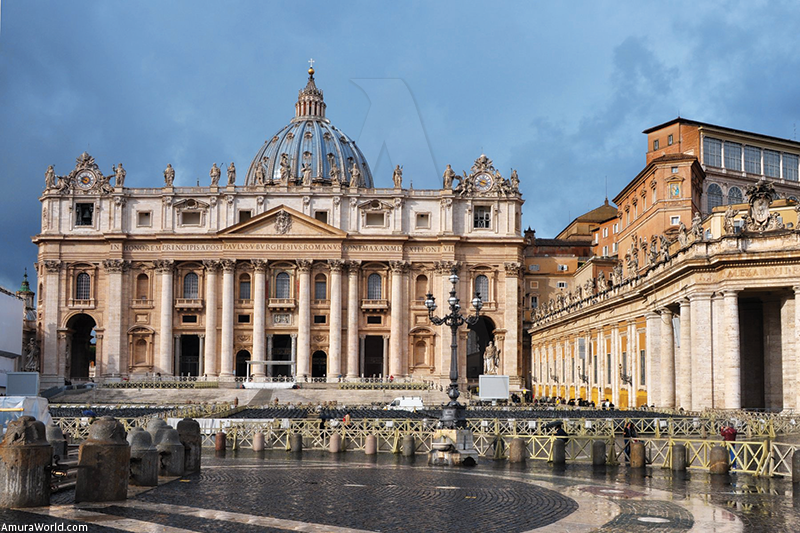 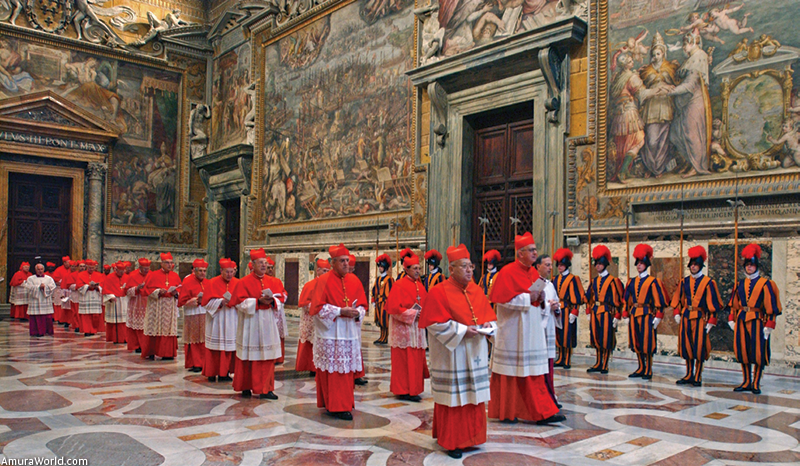 Museums and other buildings

This city also hosts great works of architecture and some of the most important art collections in the world, among them are:

The Saint Peter’s Basilica, whose construction began in 324 by Constantine in the place where the Apostle Peter was crucified. The edification of the present work on the ancient basilica of Constantine began in 1506 and took about 120 years to complete. In it worked some of the most renowned architects of its time as Donato Bramante, Michelangelo and Gian Lorenzo Bernini. It has 15,000 m2 and can accommodate 20,000 people.

The St. Peter’s Square was made by Bernini between 1656 and 1667. It is surrounded by four rows with 284 columns that follow the Greek Doric style. In the part of the balustrade there are 140 statues of saints from all over the world, which were built by the disciples of Bernini.

The Etruscan Museum, founded in 1837, has objects from excavations in the southern Eturia since 1828. The Egyptian Museum (1839) contains works that come from excavations in Egypt and now preserved in the Vatican.The Lateran Profane Museum (1844) has statues, bas-reliefs and mosaics of Roman age that couldn’t find place in the Vatican Palace. The Christian Museum includes ancient sculptures with Christian symbolism, especially sarcophagi and stone inscriptions.

The Hebrew Lapidary is a section with 137 inscriptions from ancient Hebrew cemeteries in Rome, mostly brought from the Cemetery on Via Portuense, which were donated by the owners of the land, the Marquises Pellegrini-Quarantotti. The Historical Museum (1973) presents an iconographic series of the Popes and historical memories of the Papal armed bodies and the Pontifical Chapel and Family and honorary titles today suppressed. 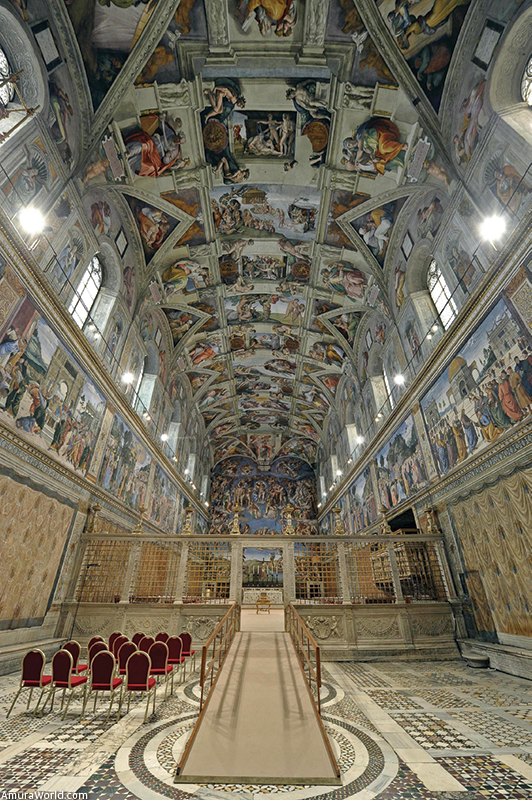