The mythical people that arrived from the Arctic

Known as the last frontier, its dazzling, shed-from-the-heavens Aurora Borealis, granted a mystical character to the majestic Alaskan lands; transforming them into a sacred place for natives who arrived many Moons ago. They were lured by an ancestral call toward the Denali, sacred mount; silent guardian treasuring the secrets of a people known as the Inuit, name that in their own language, the Inuktitut means ‘people’ (ᐃᓄᐃᑦ).

They dealt with the cold, confronted the toughness of life, adapted and created a remarkable culture, around one of the territories with one of the most extreme climates on Earth. They are the evolutionary example of how human beings join in brotherhood in order to create, sustain and perpetuate a self-sufficient way of life. 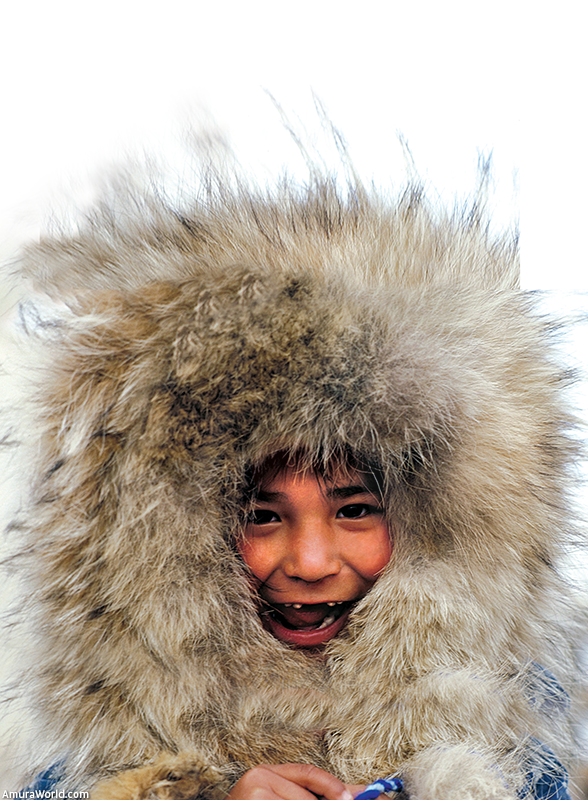 Unflappable believers that the Divinity resides inside every element of the natural world by endowing it with a soul, they venerated and gave thanks for all of the events surrounding them; the inclement weather included. These knowledgeable experts on the Arctic, established a trail network that spans hundreds of kilometers, which has allowed them, along the years, to follow the sea and land seasonal movement, together with the animals they feed on, as caribou, fish, seals, walruses and whales, among other sea animals. Furthermore, it has been learned that this net of extremely precise and convoluted corridors over the routes, patterns and synchronization of animal movements, having been passed from generation to generation, for centuries, also links the various Inuit groups with each other, from Greenland to Alaska.

It is also known that, contrary to the common belief, they did not live in igloos; these were, originally, used when going hunting, activity that might have taken them several months outside their settlements; so, occasionally, they became the displacement of entire families to the inner regions of Alaska. 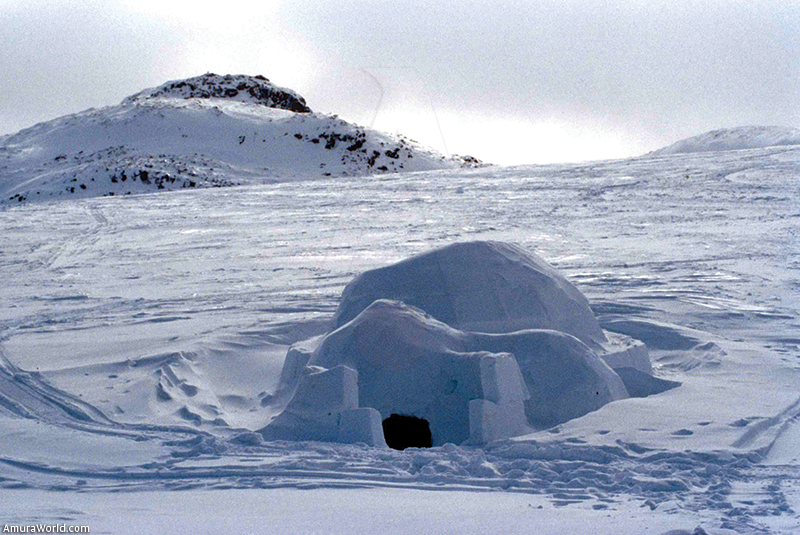 Control of their existence

The purpose in life of the Inuit is grounded on the teachings of love and honor for all life; so as every one of their acts be useful for their tribe. No doubt it is a different way of living and feeling this world, contrasted with the customs of the modern Western lifestyle. Their spiritual lore has passed from generation to generation, taught by their elders and relayed by the nightly spirits of light; the holy message from the Aurora Borealis.

Once known as ‘Eskimos,’ which means ‘raw meat eater,’ they are the only people on Earth that have been able to adapt to the freezing Arctic climate. Their history goes a long way of more than 20,000 km from Siberia to the coastal strip of Alaska, passing through Canada. With a population close to 15,000 people, it is estimated that between 25,000 and 35,000 inhabitants live in Alaska; out of which an approximate a 40% live in urban areas. In this region, the ethnic group receives the name Yupik at the west coast, and Alutiiq or Pacific Yupic (also called, Sugpiaq) at the south coast of Alaska.

It was not only their spiritual strength what helped them to overcome the adversities; they possess physical characteristics that aid them to survive in the cold. Their eyelashes are heavy in order to protect their eyes from the sunshine reflected on the ice; their body is in general short and stocky in order to keep more heat in; thanks to their enormous capability to adapt, their feeding habits were modified. In addition, they developed exceptional skills to be able to survive the ice; they are adept seal hunters, terrific fishermen, and adroit explorers, all of which let them obtain food even in the harsh Arctic winter. 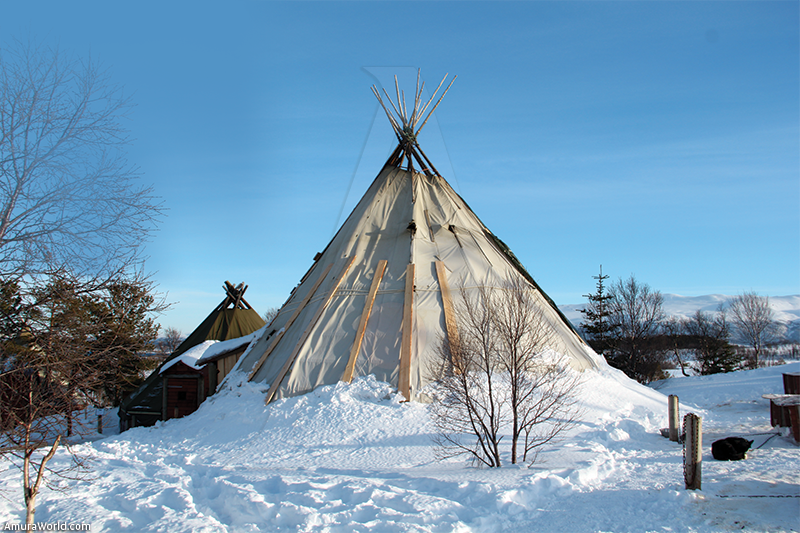 The lack of food and the hunger, above all during the winter seasons, have been a constant threat which the Inuit overcame for centuries, hardening not just their skins but their spirit.

“We dread misery and famine in the cold log cabin in winter…It is not death that provokes us dread, but suffering.” Aua, angakoq (shaman) Iglulik. (Rasmussen, 1930: 253.)

As depicted by the anthropologist, explorer and cartographer Robert J. Flaherty, in the documentary Nanook, which tells about the harsh living conditions of an Eskimo family from the Arctic at the beginning of the twentieth century, including the detailed reality of this race, living in a climate almost impossible for the rest of the human beings; he shows us two adapting strategies prevailing in the group survival, practiced during times of famine and sorrow: infanticide and gerontocide.

The ones practicing either infanticide or the abandonment of elders and ill, were not stigmatized, because these were socially accepted acts. On the one hand, girls, sickly infants or orphans (when there were no possibility of adoption) and in the cases of widowing or death of the mother, usually were abandoned to the harsh environment; practice that supposed a greater demographic control over the population, but also reflected an ecological adaptation. On the other hand, while geronticide meant the abandonment of elders, otherwise they, by themselves, would end up withdrawing from the tribe to die of hunger or frozen. In spite of these practices, they were not always able to avoid hunger, conditioned by a climate where it is so easy to live close to the death as the hard possibility of living. 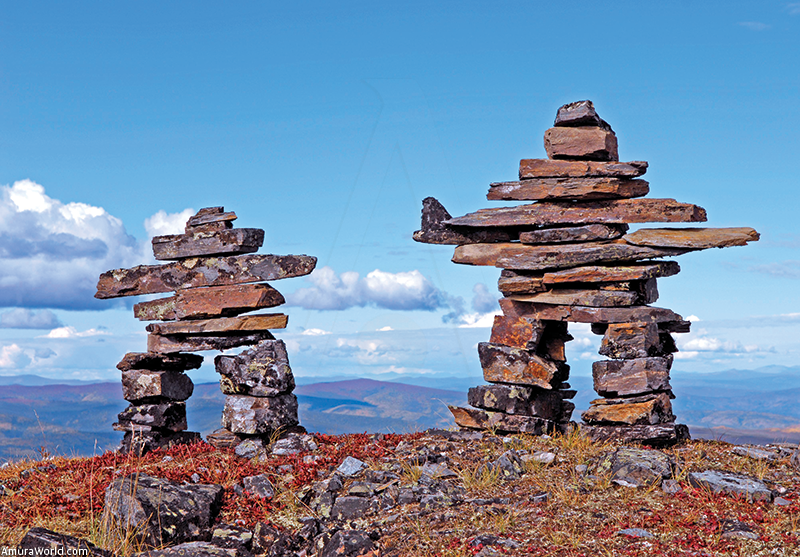 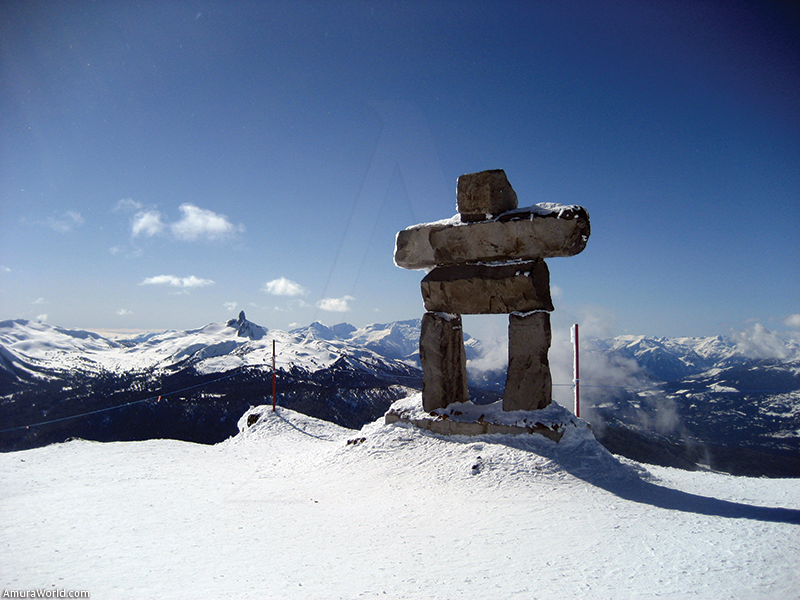 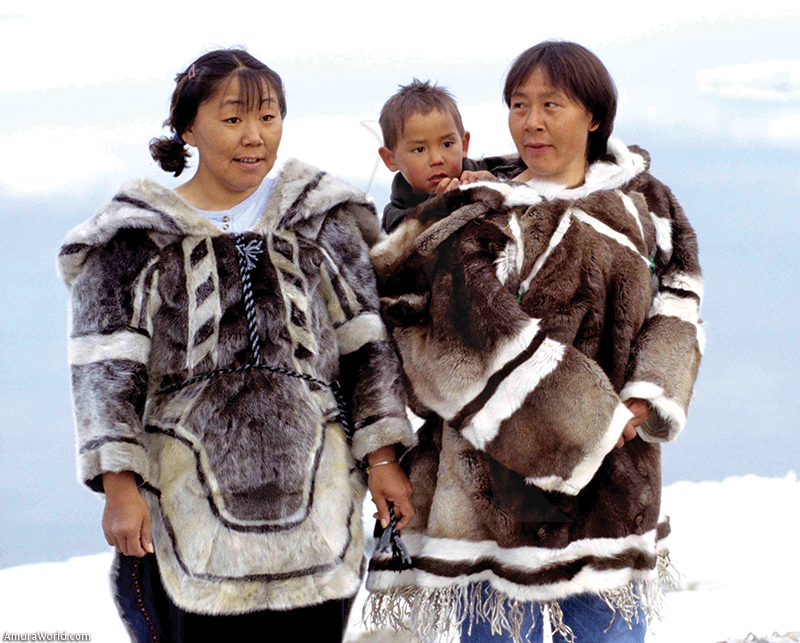 Inuit peoples have a rich mythology, orally relayed, telling about their traditions, explaining their worldview and the origin of the world they inhabit; their animist principles and the power of their shamans let them live for centuries; by feeding on the animals which also, like them, possess a soul. That is why the hunter carries out a brief ceremony when his quarry dies; thus its soul integrates to the universe beyond the earthly world. When an Inuit dies, according to their beliefs, even when his soul transcends or goes to the underworld, one part of him perpetuates itself, passing through to a just born relative.

Submitted to an untamable and hostile Nature, unsure about the future and the success of hunting, they laid their hopes of survival in a series of beliefs and rites; whose common denominator was their respect for Nature and its uppermost exploitation. Their hunting rituals related to capture of game, represented the respect for Nature the Inuit had, and that they expected to be requited with their food. So it was recorded by Edward S. Curtis in his book Kayak among Ice: The American Indian, 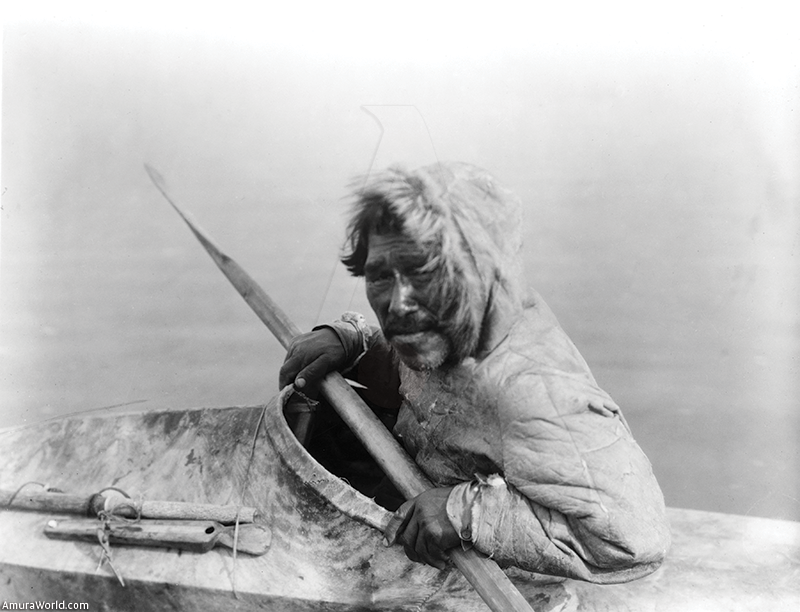 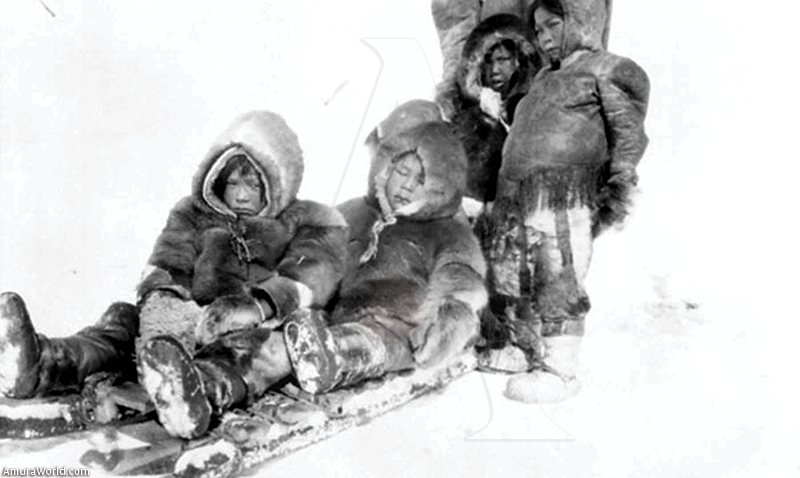 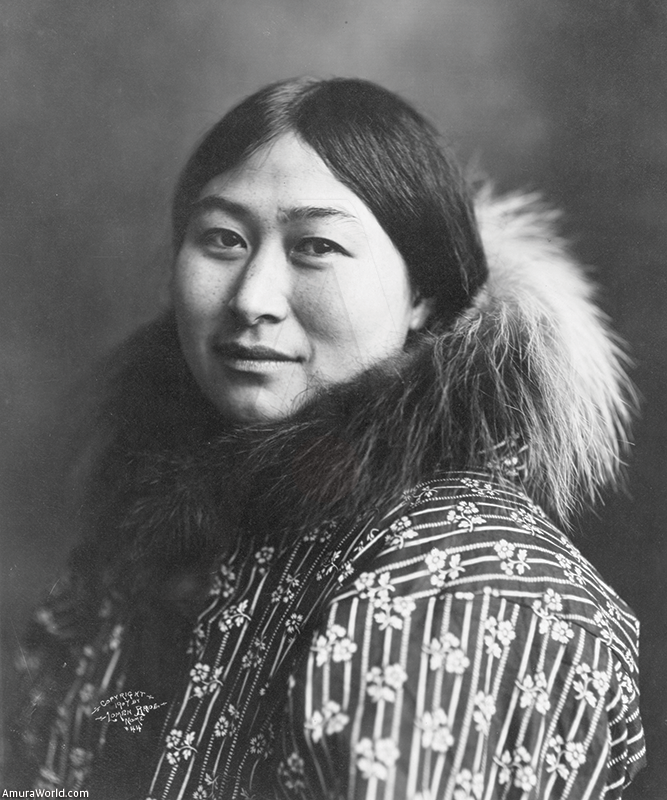 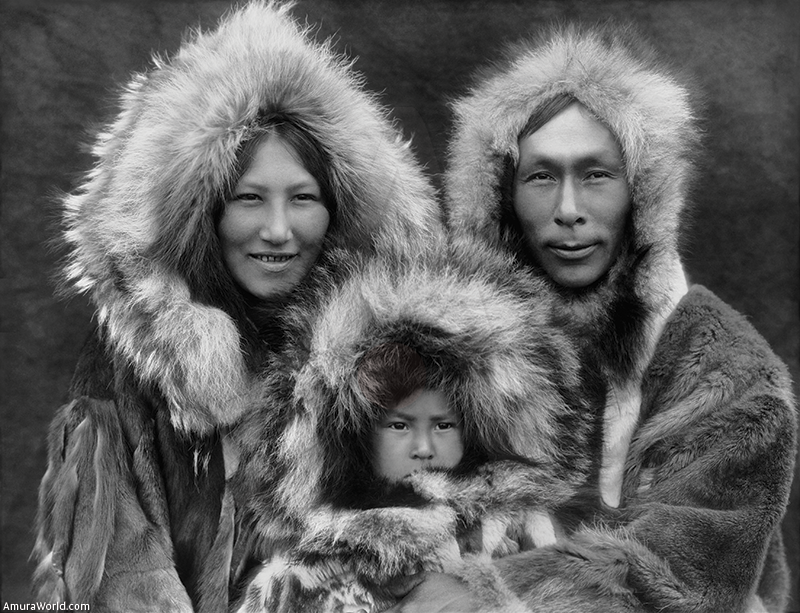 Where the Yupiit from Alaska celebrated the bladder festival, consisting of hurling seal, walrus and beluga whale bladders to the sea; since they believed the souls of these animals dwelt inside them until thrown to the ocean. By doing this, they honored these animals and expected them to be reborn; so as, later on, they allowed to be captured by the hunters. On the other hand, they regarded as taboo, the eating of terrestrial and sea animals altogether.

But when one individual affronted the spirits, this harmony was broken, and the immediate effect might have been lack of quarry, or illnesses or storms. Thus, it was paramount to honor Nature and the animals dwelling in her; besides behaving in the right manner. Within their vital cycle and the field of their daily activities, they considered spirituality as a strategy of survival.

Before these facts, the objects the same as the natural phenomena and, naturally, animals and people, had their own anua (lord, anima, spirit) to be honored and they intended not to affront them. So, the Inuit were fully integrated within their natural environ and never regarded themselves as being out of it.

A Light in extinction

Due to the capabilities of adaptation and survival of this group, where every tribe had their own dietary habits and, as a consequence, a subsistence and traditional economy; where every clan evolved at different stages of cultural development; every people displays uneven degrees of impact on problems derived from common factors confronting the globalization process. 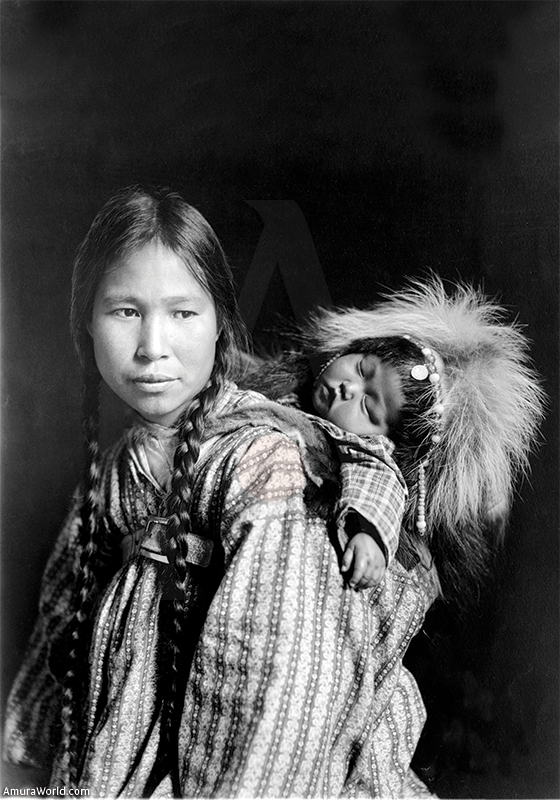 Currently, these peoples interact with that new challenge, globalization; thus finding themselves in front of yet another new adaptation challenge, the modern western lifestyle; together with the global warming and the environmental pollution. Such change has provoked a millennial culture, which is used to living by following the premises of hunting for eating or living for hunting, to be affected in their physical and mental health, by the contemporary accelerated lifestyle, and eventually, by carrying on their extinction. Regarding their existence, it has been known of up to 25 different Inuit groups; out of which, there are only 19 left. Each one had their own idiosyncrasy conditioned by three basic factors: the geographic area in which they evolved, their access to the existing resources in their respective regions and the environmental conditions to which they had to adapt themselves. Due to these conditions, every one of these groups kept their own essential features, which have been modified along the years, based on the degree of action and interventionism from the countries to which they belong.

The Inuit set a series of rules to live with each other, by leading them, mainly, toward the search for harmony between the natural and supernatural worlds; their elders having the mission of relaying their lore to their children. Thus, myths and legends keep their values alive, highlighting the ecological and spiritual equilibrium that have been essential for their subsistence, not just in the past time, but also in the present time.