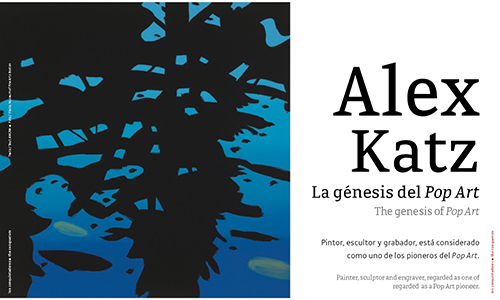 "What many regard as superficial, for me it is actual and positive”, says the Russian artist, born in Brooklyn, Alex Katz, who has managed to make his artwork into a certain symbol of a rich and bohemian class, on the premise of their taste for glamour. His featured large format portraits (being cutouts –cut and painted figures—his main contributions), his implementation of neuter backgrounds, his bets on abstractions and his use of billboards have built a bridge between art, advertising and fashion. 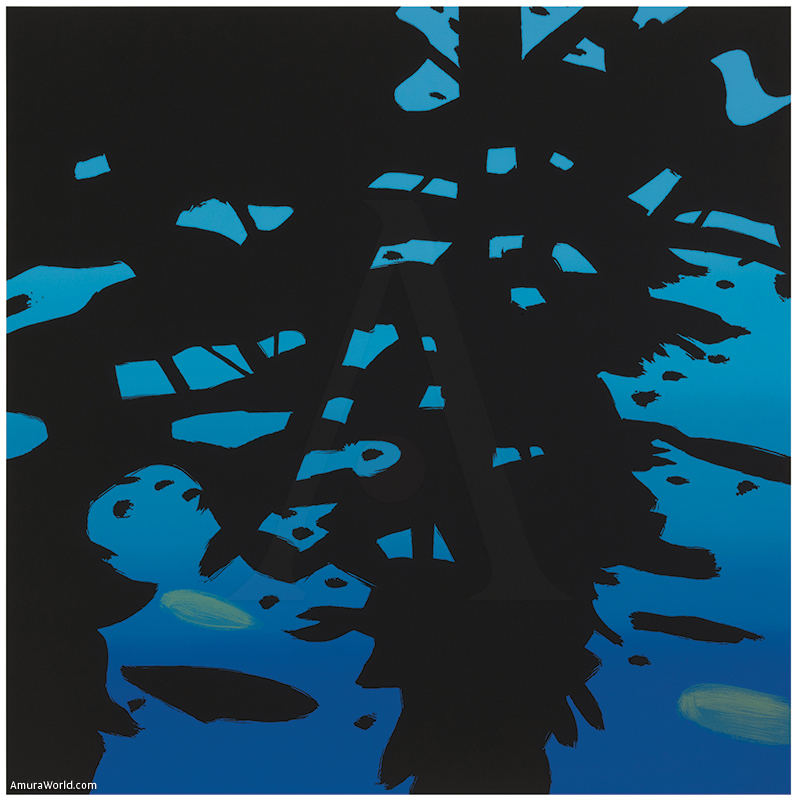 His portraits break out of the psychological interpretation and very anecdotal character, by offering an iconic proposal, free from those not indispensable elements; and that is why his paintings are used to represent people close to him: relatives and friends; but, above all, landscapes especially from Maine. “I like Maine’s light very much; it is different from New York’s. Ever since the first time I went over there, I decided wouldn’t want to cease seeing it for the rest of my life.” He is also used to casting characters from the cultural life of the 60s and 70s including artists such as: Rudy Burckhardt, Al Held, Brice Marden, Ted Berrigan, Thomas Disch and Williams Dunas; Katz delivers to his creations a cold objectivity and a seductive elegance; in general, in his style, dramatic close-ups and expressive colors are abundant; the images he produces are neat, clean and nice.

However, even if they are very intense, the condition in Katz’s paintings is that there is no melancholy in them. He himself points out that his work speaks about the present time, since it is his way of living, always in the present. “There is no narrative, there is no past. Nothing of what we see in it will vanish.”

A recurring character in the artwork of this remarkable artist is his model Ada, his inspiring muse and wife, who has become an absolute icon in his work. An example of this are Blue Umbrella #2 (1972), Orange Hat (1990), Ada With Sunglasses (1990), Brisk Day (1990) and other works in which the painter alludes to the fashion trends of the last decades. The truth is that with a handkerchief or a hat, Ada’s intimacy is part of art’s history in the second half of the XX century. “That was always my intention, from the beginning, to make universal something as negligible as my intimacy.” 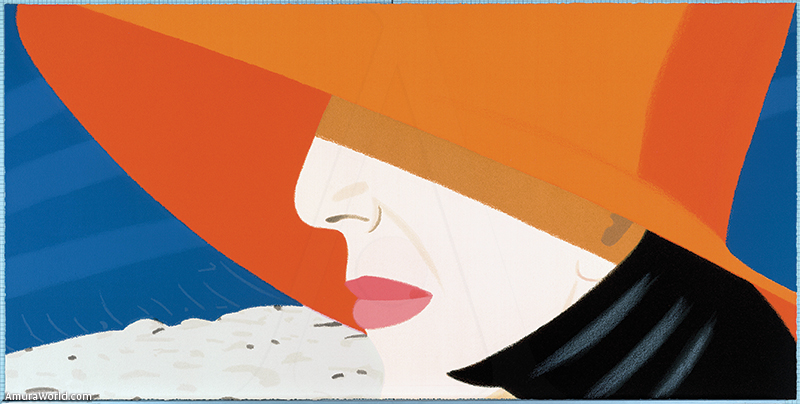 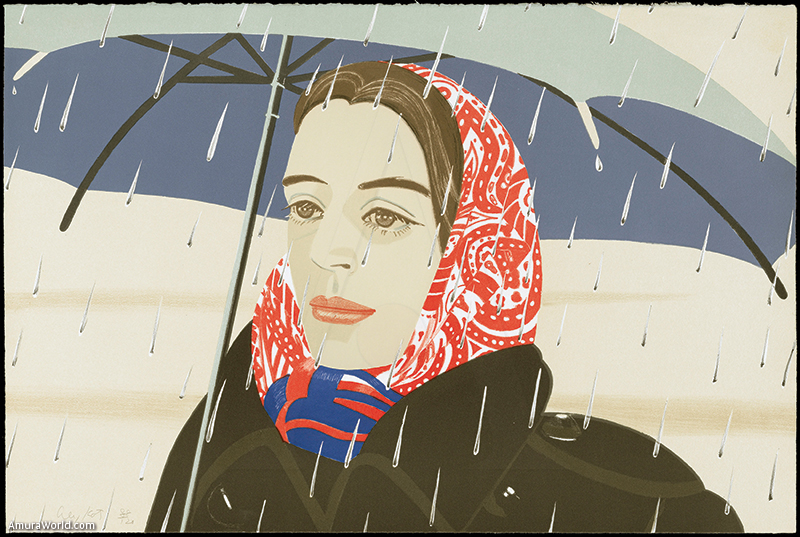 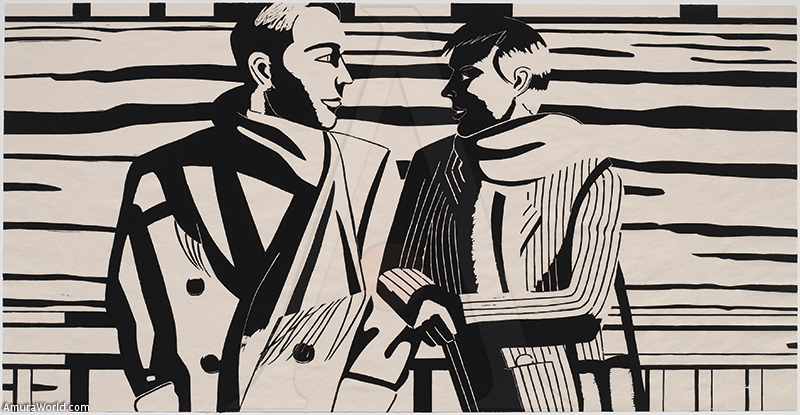 Owing the sheer influence of the mass media, his work has been regarded as a precursor of Pop Art; even in recent interviews, he himself has alluded to the topic, self-designating as father of that movement; although some characteristic elements of his production such as the use of light –as a modulating resource of the surface—mark a boundary with that movement.

At the beginning of the 50s, he felt attracted and was influenced by the abstract expressionists, he began to create trees and some paintings from photographs, and common folks’ portraits. In 1954, for the first time, he made a solo exhibition in the New York Roko Gallery.

In the mid-sixties, his work was focused on etching, lithographic editions in serigraphy, wood engraving, and cut linoleum, where he displays aesthetics of very simplified forms, here color and forms stand out in his well-known silhouettes and cutouts.

By 1970, he was concerned with interpreting the artistic and cultural world.

In the 80s his topics dealt with ephemeral situations, his characters are captured at the moment of making some expressions such as smiles, or actions, like discussing. At that stage, he synthesizes an epoch featured by leisure, clout from the fashion world and carelessness; he was also attracted to large-scale landscape painting, a theme plagued by experiments, according to the first stage on his artistic career and that he has been exploring until this day. 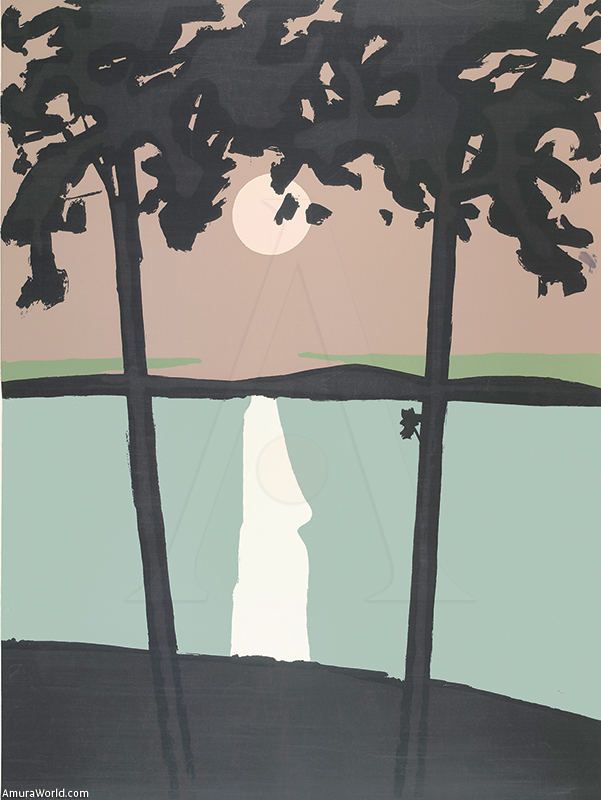 Nowadays, at 88, with a beaming smile that makes him look young and radiant, Katz splits his time and work mainly in two seasons, almost like it’s done in the world of fashion; for him, primordial seasons are summertime and wintertime: “My summer stretches until November, when I usually finish, there I just take notes of many things, and then these notes evolve. It is the painting itself the one deciding its final size.”

As one of the artists with more clout in contemporary art, his artwork is a frame of reference for contemporary artists, represented in the paramount museums of contemporary art in the world, such as: the Museum of Modern Art (MoMA), the Whitney Museum of American Art and the Metropolitan Museum, in New York; the Centre national d’art et de culture Georges-Pompidou, in Paris; the Tate Gallery, in London; the Museo Reina Sofía, in Madrid at the  Guggenheim Museum Bilbao.