Rajastan: gateway to the millenial Indian 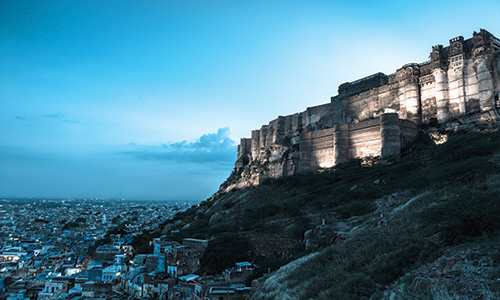 India is a country of wonders. Civilization came here before many other places of the world. Some of the oldest cities in the world are found in its territory. Mohenjo-daro, one of the main cities of Harappa culture, was founded around 2500 B.C., while in Egypt began to build the famous pyramids of Giza.

Over time, many peoples and cultures came into contact with India, living his own mark and learning from their civilization. This has allowed us today to enjoy a very interesting mix of styles, traditions and customs.

As an example we have three of the most beautiful cities in one of the biggest and most amazing regions: Rajasthan. They are Jaipur, Udaipur and Jodhpur, better known as the Pink City, the White City and the Blue City, due to the unique color of their buildings. 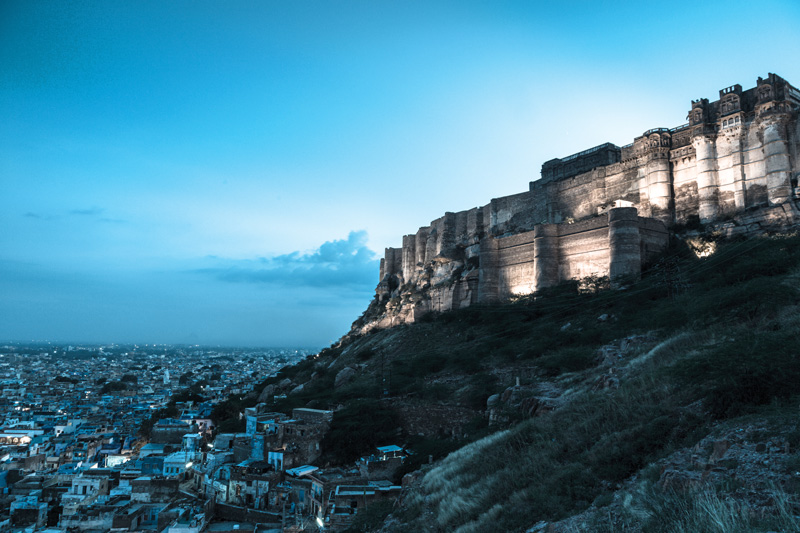 Jaipur is the youngest of the three cities. Founded in 1728 by Maharana Sawai Jai Singh II, ruler of the kingdom of Amber, soon it became his capital. The Pink City name is due to the fact that all the buildings were covered with pink stucco in order to mimic the sandstone, a sedimentary rock very present in places that were covered by water in the past.

Jai Singh II was a great astronomer and urban planner. So he designed the city shaped the ninth part of the Mandala, known as “Pithapada”. That number is due to the nine planets of the ancient astrological zodiac. In addition, commercial centers were designed in multiples of nine and one street intersection was planned for each planet. It is certainly one of the best designed cities in the world, which in 2010 was named World Heritage Site by UNESCO.

Over the years, the constant civil wars ravaged the city and undermined the power of its rulers, who were forced to seek the protection of the British at the continuing armed incursions of Afghan tribes. The pink stucco was lost until Prince Albert of Wales visited the city in 1876 and local authorities decided to paint the buildings in pink. Since then the people have endeavored to keep them in that way.

The color choice was not just a whim. In Rajasthan pink symbolizes hospitality and good luck, but to be honest its inhabitants did not have much of them during various stages of their eventful history. Nevertheless, when one comes to Jaipur observes rather a somewhat faded orange color instead of the promised pink, but that does not detract from the charm to this wonderful city. 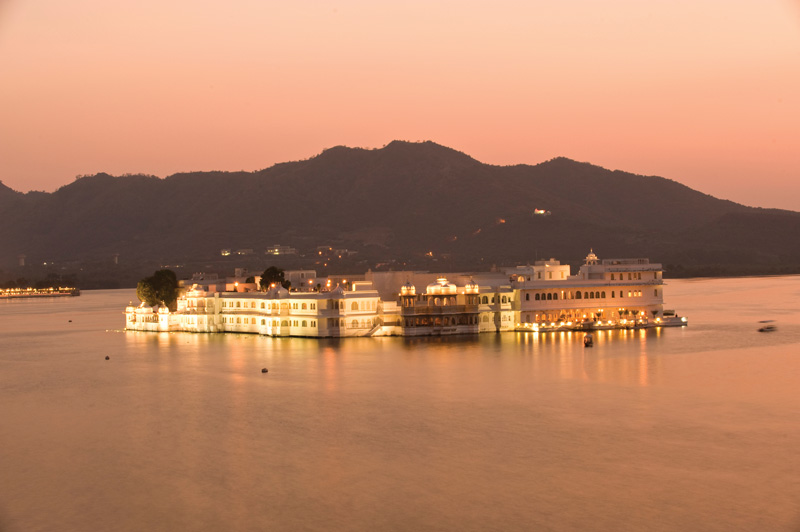 Dazzling colors of Rajasthan between water mirrors and unique architecture. 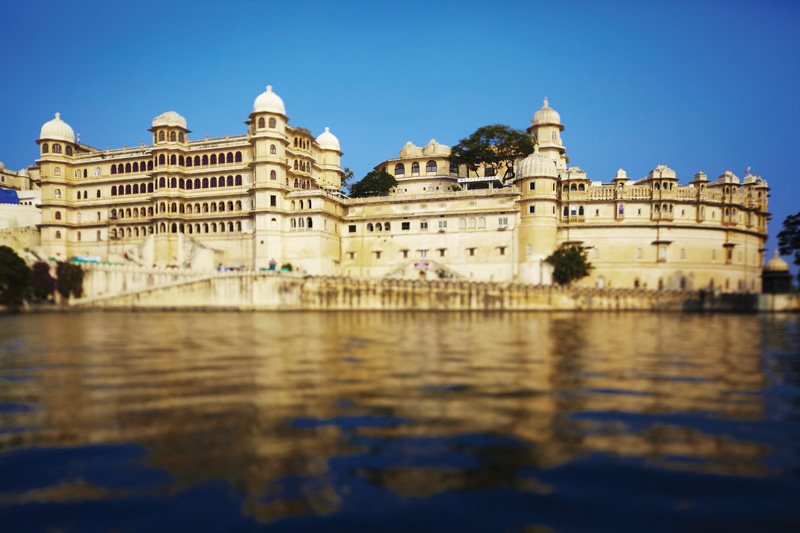 Udaipur, the White City of Rajasthan, was founded in 1568 by Maharana Udai Singh II to serve as capital of the Rajput kingdom of Mewar. The white color of its buildings, caused by the lime that covers them, has made it the most romantic city of India.

According to legend, while he was hunting, Udai Singh II approached a hermit near the mountains Aravalli. The hermit blessed the kin and asked him to build a palace in that place in order to be protected. The king accepted and took up his residence there, making later in the capital of the Rajputs. The real story is a little bit different. The Mughals had spent years attacking the ancient capital of the kingdom, so the king decided to find a more remote and protected place. He found that place on the shores of lake Pichola where he founded Udaipur. This would allow Mewar was the only one of the seven states of Rajasthan to remain faithful to Hinduism rejecting Muslims.

However even the most defended fortress ends up falling. The city experienced a period of prosperity after the defeat of the Mughals, until 1736 when the Maharattas, its neighbors, attacked by surprise and took the city turning it into ruins. It was pitiful to see. Therefore the Rajputs decided to ally with the English and with their aid recovered their city, starting reconstruction immediately.

During the occupation of India by the British, Udaipur, like most of the kingdoms in the Indian territory, became a princely state in 1818. Thus, as in Jaipur and Jodhpur, the maharajah retained his wealth and social position, while the English took the government.

After India’s independence in 1947, the maharajah of Udaipur agreed that the territories of Mewar be integrated in the state of Rajasthan in exchange for maintaining a similar situation as the one he had during the British rule. All this ended abruptly in 1971 when Prime Minister Indira Gandhi reformed the law and became ordinary citizens, confiscating many of their properties.

Udaipur has many memories of his glorious days. One of them is the Royal Palace, consisting of eleven small palaces and where the heir of the maharajahas still lives, the number seventy-six on the list, which becomes his family in the more ancient royal dynasty of the world. In the middle of the lake is the former Summer Palace which, according to legend, inspired to build the famous Taj Mahal. 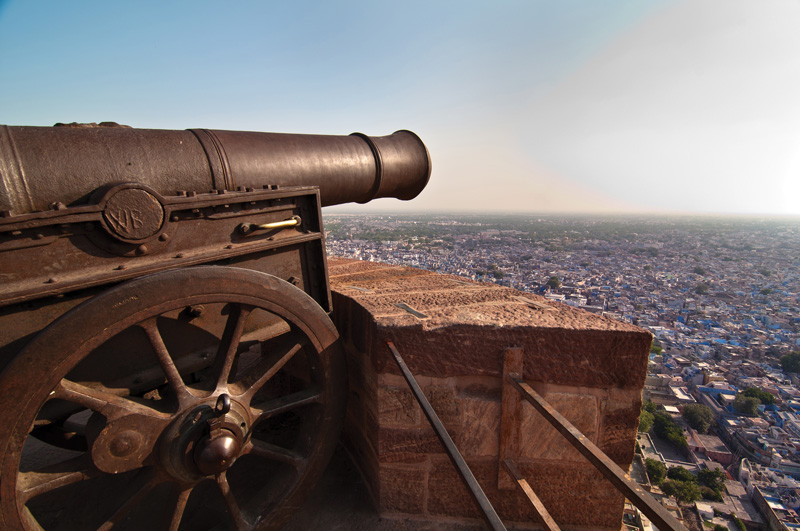 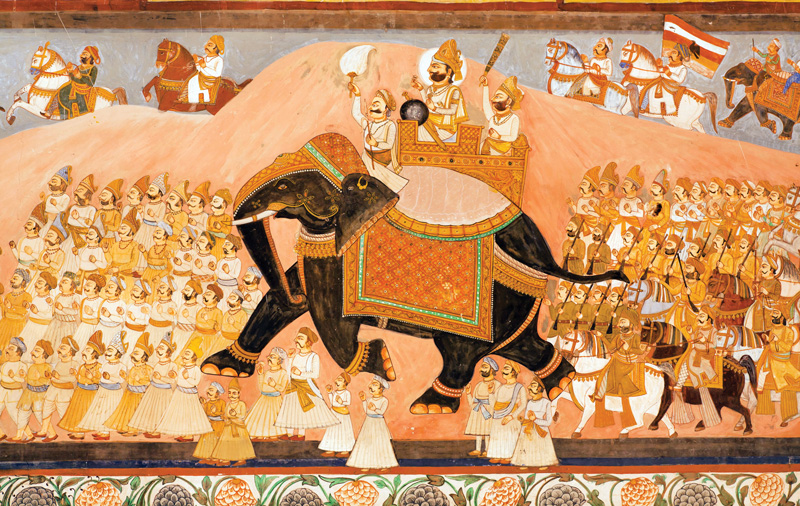 The paintings and details of each palace in Rajasthan extend the style and colors bow of each city. 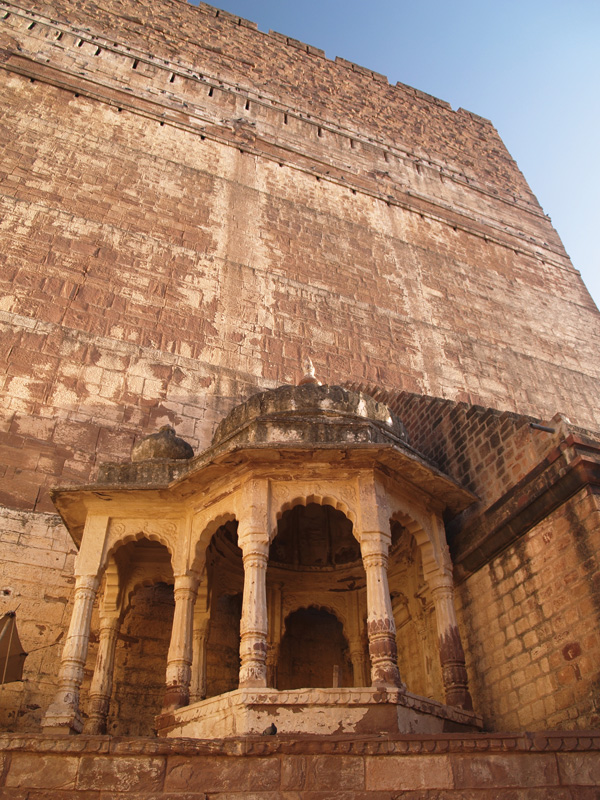 Each colossal construction in India is overcome only by its own beauty.

The third jewel of Rajasthan is called the Blue City, Jodhpur, founded in 1459 by Rao Jodha, a Rajput chief belonging to the clan of Rathore and creator of the State of Marwar where he founded the city in the strategic road linking Delhi to Gujarat, a situation that allowed him to benefit from the rich trade of opium, cooper, silk, dates and coffee. His motives were similar to those of Udai Singh II of Udaipur: escape from the Mughals.

For the same reason Roa Jodha built the city at the foot of a hill at whose summit he built the imposing fort of Mehrangarh, which still dominates the city. As the Mughals could never conquer it, they decided to negotiate with the rulers of Jodhpur, which allowed the arrival of an era of prosperity in the kingdom.

But sometimes even kings are wrong. In the seventeenth century a civil war broke out in the Mughal Empire. The Rajput (ruler) of Jodhpur decided to support the rebel Sha Jahan against the legitimate sovereign, the sanguinary Aurangzeb. But Aurangzeb won the war, so he immediately went to the city and pillaged it mercilessly in 1678.

As Udaipur, Jodhpur was submitted by the Maharattas in the eighteenth century and could only be retrieved by their former rulers with the help of the British, though at the cost of losing their independence. From there the story of the three cities is similar. Upon reaching India its independence in 1947, joined the state of Rajasthan and the maharajahas lose their privileges in 1971 thanks to a legal reform promoted by Indira Gandhi. 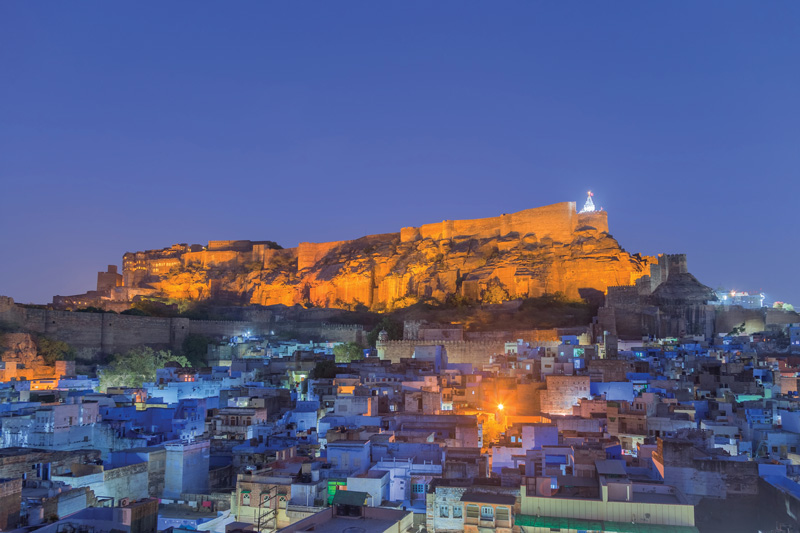 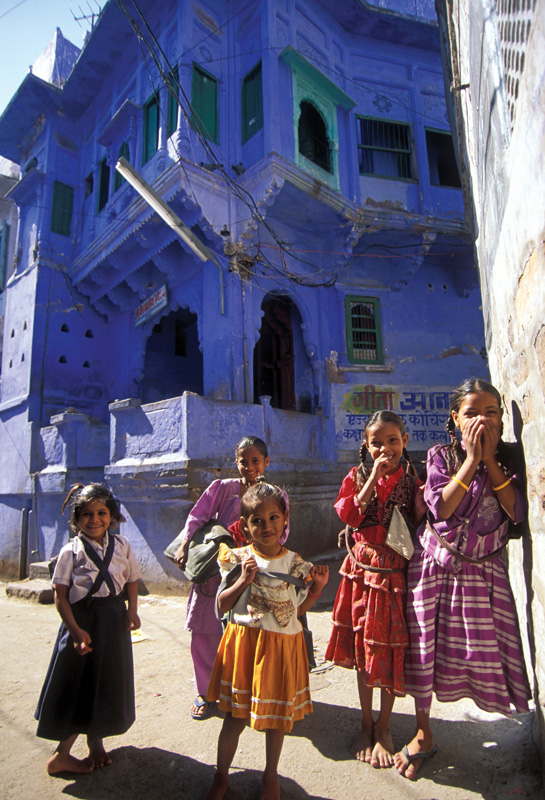 Beyond the colors of the Rajasthan architecture, there is the folklore, life and traditions of its people. 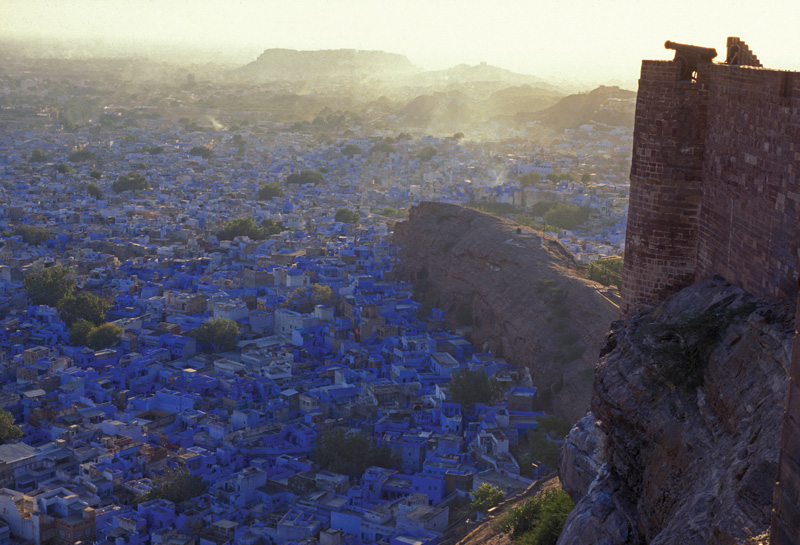 It is believed that the blue of these buildings in Jodhpur is effective to ward off mosquitoes.

Why the blueness that adorns most of its buildings? There are several theories. Some people say it serves to reflect sunlight and thus beat the heat; others believe thar color serves to ward off mosquitoes; some say it was more used by the Brahmins, the highest caste in India, to paint their houses and that eventually was imitated for the other inhabitants of the city. Anyway, the blue color gives a stunning look to the city.

Speaking of a subject beyond the architectural color, there is something in Rajasthan that show us that despite the beauty, modernity and political and social advances, some customs do not change and has strong roots in the population, printing another kind of tones and colors in the Indian experience. Such is the case of sati, the immolation of widows on the funeral pyre of her husband, and it is still practiced amid the colorful scenery of Rajasthan. This ancient custom was founded on the idea that women could not survive her husband, because otherwise she was considered suspicious of his death.

Therefore many women just accept this sacrifice. In the nineteenth century the British forbade it across India without much success, since between 1813 and 1828 there were 8,135 cases only in the province of Bengal. Nowadays, Rajasthan is the region of the India more reluctant to abandon this practice. Since independence in 1947 have documented forty cases, most of which have taken place here. The most famous is that of Roop Kanwar in 1987, which led to tougher legislation against these practices and a judicial process that collided head against the inscrutability of a century-old traditions. The action of justice was an obstacle course that ended with the acquittal of the eleven indicted. Past and present joined together in one place, the nuances are infinite.