A Dialogue with the Gods

“The Ramayana will remain in the lips of men, as long as mounts still stand on the ground and rivers flow through the land toward the sea.

The powerful Khmer empire, which settled in the territories of what we now know as the countries of Cambodia, Thailand, Laos, Vietnam, Burma and Malaysia, has created a great legacy of immense beauty and artistic footprint for posterity. Khmer art is especially linked to Hindu and Buddhist beliefs, although Javanese and Chinese influences are also recognized. The Khmer civilization experienced its highest degree of progress in Cambodia, which took place between the ninth century and the fifteenth century. 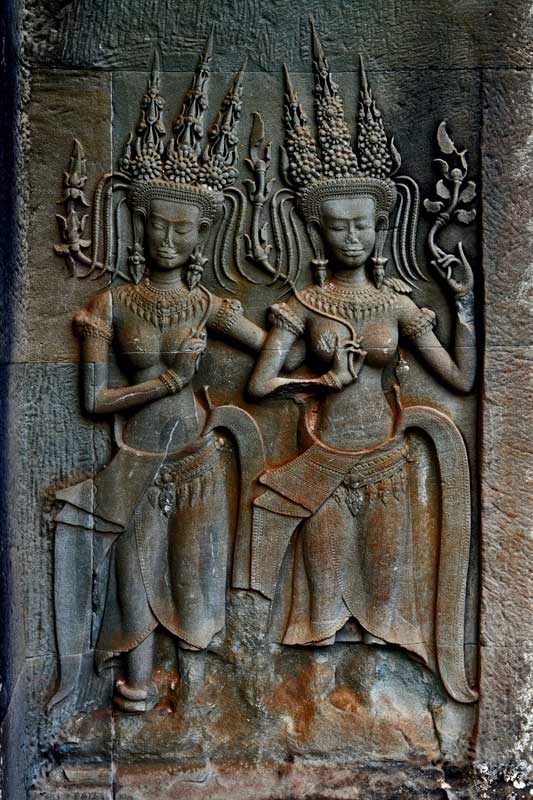 Its structures were lost and forgotten for centuries. The jungle gradually concealed the architectural treasures built by a succession of Khmer kings since the year 802. In 1600, Spanish and Portuguese missionaries described an amazing city, but they were ignored. It was not until the 1860s that French naturalist Henri Mouhot and artist Louis Delaporte unveiled the glory of Khmer art and its Angkorian capital, which were still half buried under the jungle. Some believe that the main structure of the temples embodies Mount Meru, a mythical mountain that was home to the gods in Hindu mythology. Other smaller towers symbolize different sacred mountains of the sky, while their courtyards recreate the mountain ranges and the moat to the cosmic ocean. The causeway establishes a bridge that leads men to the presence of the gods.

The vestiges of the temples that today astonish both locals and foreigners, such as Angkor Wat—the only one that was never abandoned, in addition to Preah Vihear, Sambor Prei Kuk, Samrong Sen, Anlong Phdao, Melou Prei or Laang San—represent only part of this treasure, which still remains hidden or that has disappeared through time or alternate causes. Today we know that the Angkor builders used sandstone as the main construction material, laterite and wood—the latter has disappeared due to decomposition and other unknown events. The element that agglutinated them has not been identified.

“One of these temples (Angkor Wat)—a rival to that of Solomon, and erected by some ancient Michelangelo—might take an honorable place beside our most beautiful buildings. It is grander than anything left to us by Greece or Rome. 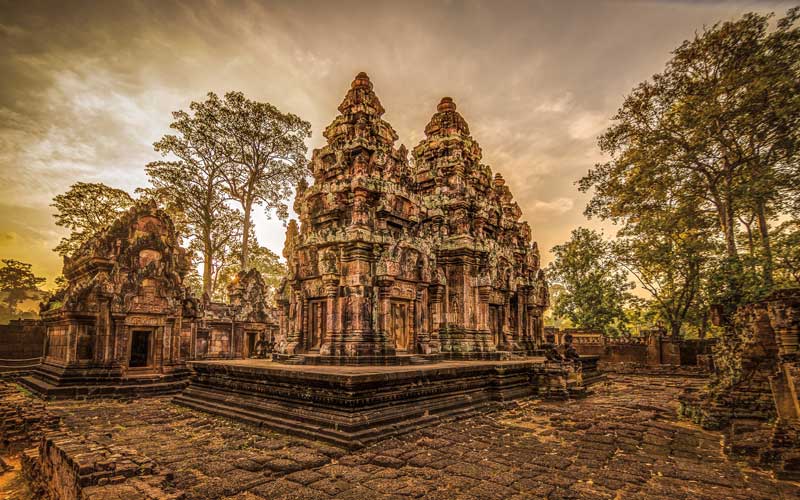 Banteay Srei temple (967 A.D.) remained in use until at least the 14th century. The site was rediscovered in 1914. 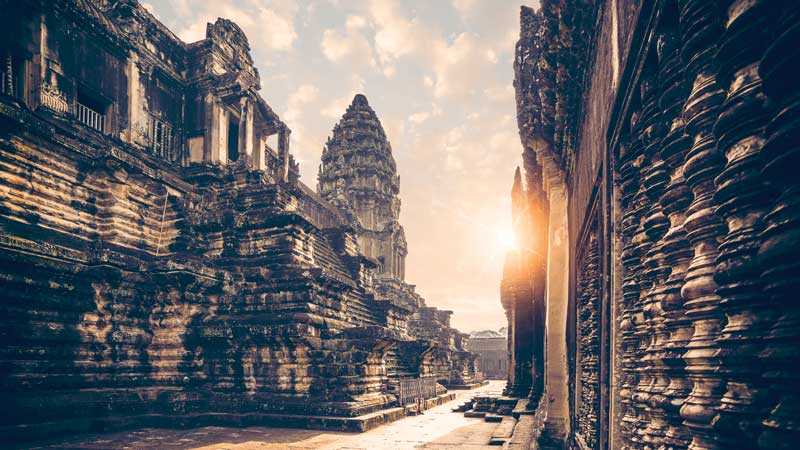 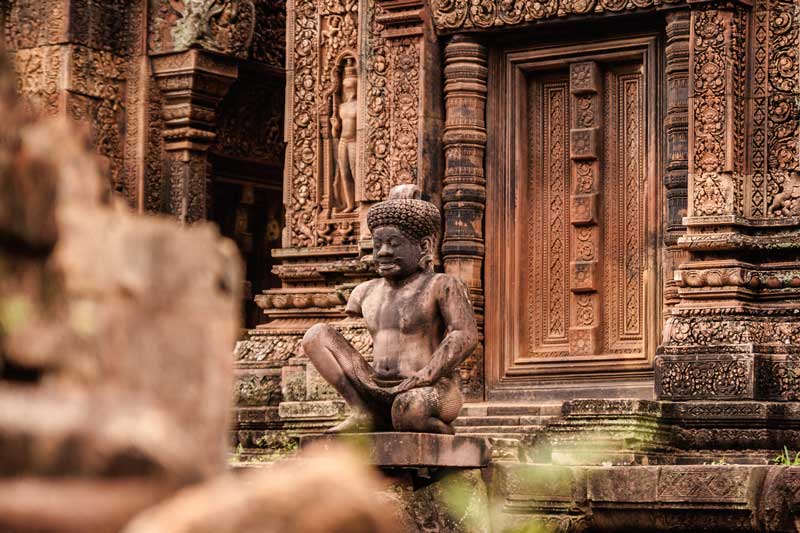 Inside all the constructions, you can find colossal masterpieces that represent mythological, celestial and earthly beings—masterfully carved and sculpted in stone: gods, goddesses, kings, princes, representations of sacred legends and myths such as Mahābhārata and Rāmāyaṇa, as well as mythological animals like snakes, dragons, nagas or lions. Throughout the centuries, Buddha statues were added, and the most stunning were carved into 50 towers, with representations of the four faces of Bodhisattva Avalokiteśvara: the Buddha—one of the images that universally identifies Khmer art and classical architecture. They also used bronze for their fantastic artistic achievements.

As for painting, most of these works were destroyed during the unfortunate Khmer Rouge period. There are Wat murals in the Silver Pagoda of Phnom Penh, Wat Bo Temple in Siem Reap, and Wat Kompong Tralach Leu in the province of Kompong Chhnang. 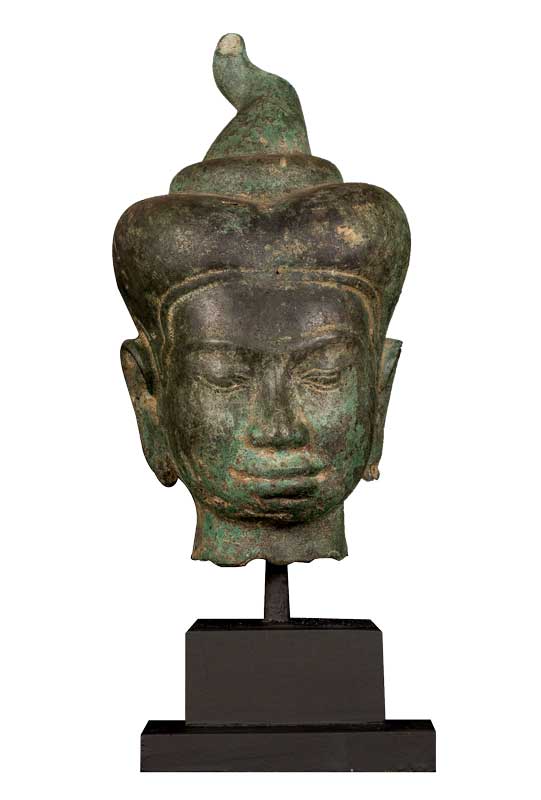 According to the Royal Spanish Academy (RAE) the correct name of this language and culture in Spanish is Jemer, which in Cambodian is pronounced kamae, and which has been translated into French and English as “Khmer.” This language, which belongs to the Malay linguistic family, has been related to Sanskrit and Pali. It is in use, along with other dialects, in Vietnam, Thailand, Burma and Laos. The main branch of this language is spoken in Cambodia. It has 72 letters, out of which 32 are vowels. Proper to Asian languages, it contemplates a complex social system of relations, which means that the pronouns in Khmer are not limited to me, you, him or her; it is much broader and depends on the interlocutor’s hierarchical position.

Classical Khmer dance derives from the Apsarases dance from Hindu mythology. Known as Robam Apsara, it is represented in over one thousand Apsara sculptures found in the temple of Angkor, demonstrating its millenary character that apparently dates back to the time of King Suryavaarman II (1113-1150), who commissioned Angkor Wat. This artistic dance was first performed by royal ancestors; it spread throughout Cambodia and later to Thailand. The hands and the body form, in great harmony, shapes that have a specific meaning. The music that accompanies this dance is performed by the Pinpeat orchestra: their main instruments are drums, gongs, and bamboo xylophones.

This Khmer artistic expression has been recognized as an Intangible Cultural Heritage of Humanity by UNESCO. The performance features puppets that stand between the light and a large white cloth. The play, which has a deep sacred meaning, represents passages of the Reamker (the Cambodian version of the Ramayana) in nocturnal presentations that are performed outdoors accompanied by an orchestra and the voices of two narrators—exhibitions can last several sessions, and can include around 150 puppets. 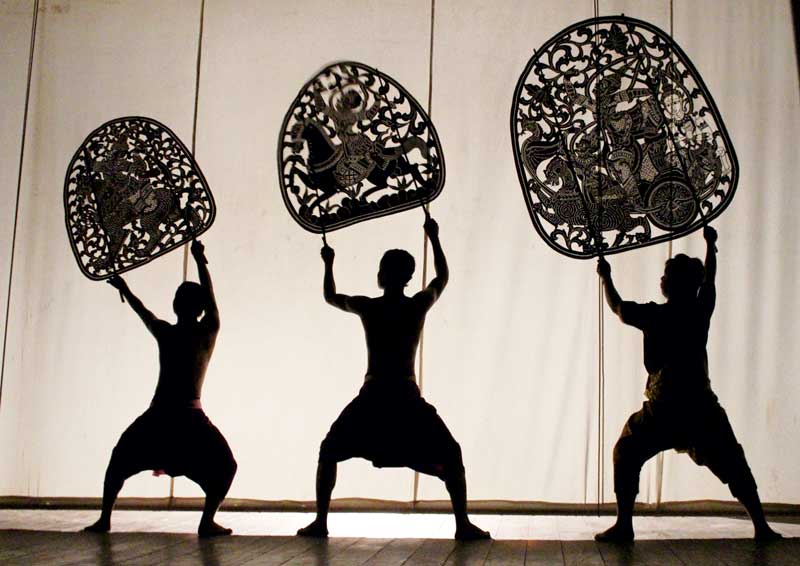 The shadow theatre is considered sacred.

Among other Khmer cultural traditions we can mention metalwork and goldsmithing, the carving of wood and stone, murals, ceramics, textiles and silk fabrics dating from the 1st century, puppets and kite-making, which have evolved since ancient times, and that nowadays are vastly appreciated by visitors.

Martial arts are also reflected in the temples’ bas-reliefs, and today they include more than 10 different disciplines. Khmer weddings consist on elaborate rituals and ceremonies that last three days and three nights, during which traditional songs are performed. The wedding concludes with the Tea Ceremony, when the newlyweds offer this beverage to the spirits of their ancestors. 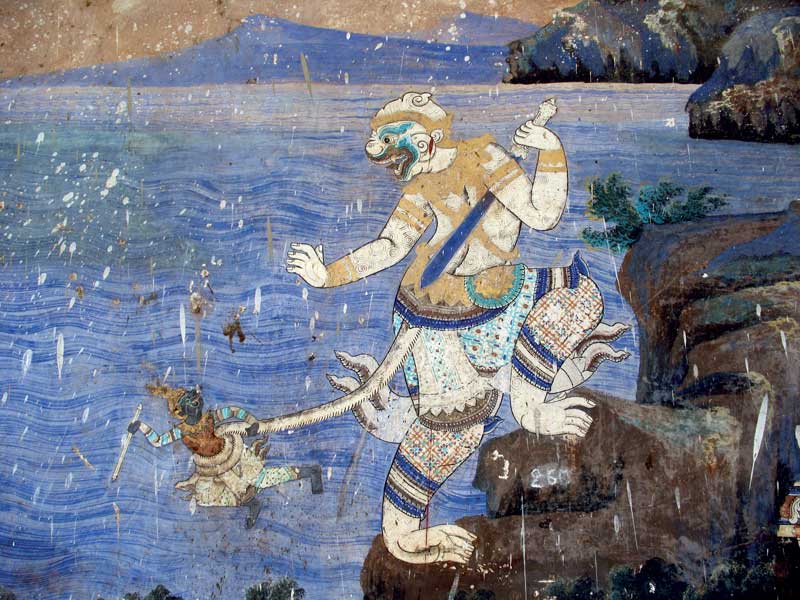