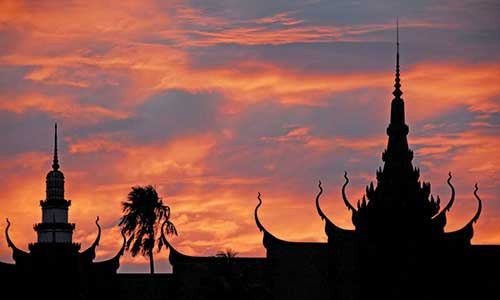 A Home for Khmer Heritage

“Real museums are places where Time is transformed into Space.

The identity and patrimony of every community are a real treasure today, where planetary communication, in a way, unifies the perspective from which we see the world. One of the most efficient methods to approach the particular legacies of each nation is visiting the museums where this wealth is preserved.

Cambodia is a fabulous kingdom, possessor of an immense cultural, archaeological, religious and artistic heritage, which is—to visitors’ good luck—possible to experience closely in one place through more than 14,000 pieces that the National Museum of Cambodia displays. 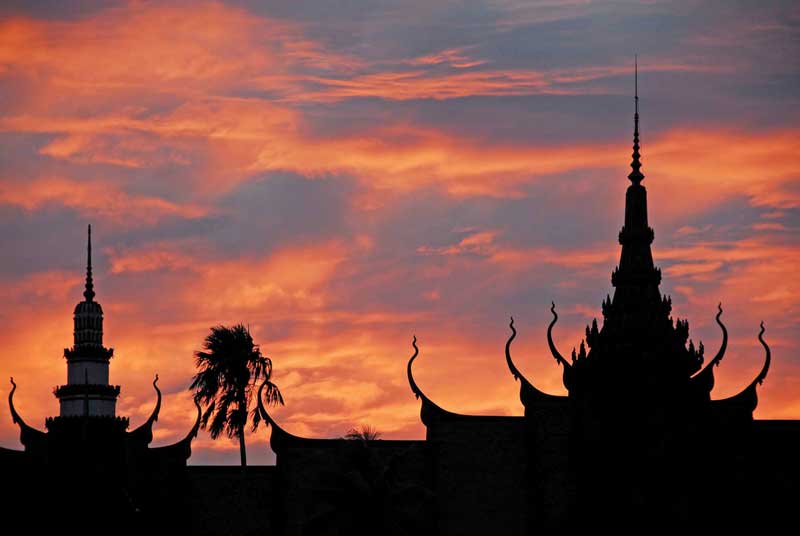 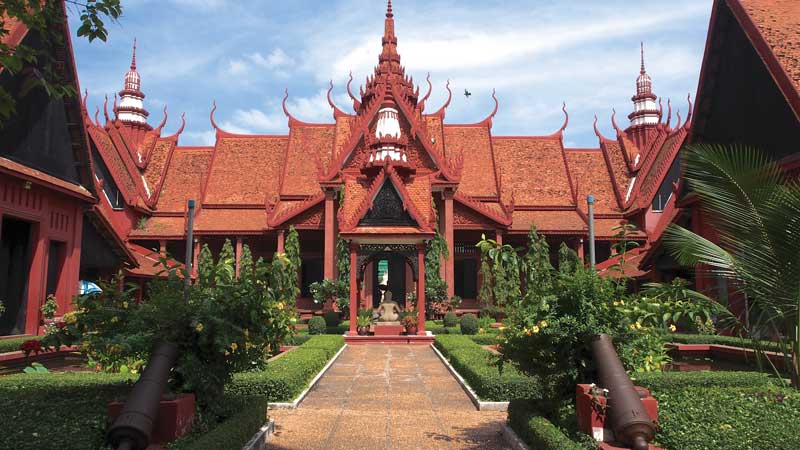 The museum garden is a space to enjoy beauty and peace.

“The whole country holds vigil over its own sleeping past, deriving no profit from it, but unwilling to let it go.

A Building of Millenary Inspiration

The astonishing effect that Khmer art has on foreigners begins when they first look at the museum buildings, which were inspired by the architecture of ancient temples. They were designed by George Groslier—historian, curator, and author of French descent, born in Phnom Penh in 1887. He was the fundamental protagonist in the construction and conception of the museum; he devoted his life to the study and revaluation of Cambodian culture, with the subsequent achievement of bringing forth the revival of the ancient arts of Khmer civilization. In addition to the museum, he founded the School of Arts of Cambodia, dedicated to promoting the kingdom’s traditional crafts. Today it is considered the driving force behind the rebirth of the arts and crafts of Cambodia.

The museum is appreciated as a virtuous example of traditional Khmer architecture. It was built with traditional materials, and its main features are its curved roofs crowned with nagas (snakes in Hindu mythology), exquisitely carved doors and windows, eaves, pediments, ornaments, open spaces to courtyards and gardens that faithfully evoke the true spirit of Cambodian art. The fact that the central door was carved by eight ancient craftsmen and ten of his students—summoned by Groslier—is highly celebrated. This is just one example of his efficiency in getting new generations involved in recovering their ancestral knowledge. The end result from all the groups that massively approached the School of Arts, and the museum itself which served as an educational workshop, were recognized in several international exhibitions; the most successful one was the 1931 International Colonial Exhibition in Paris, where they reproduced the Angkor Wat temple in a prodigious way. 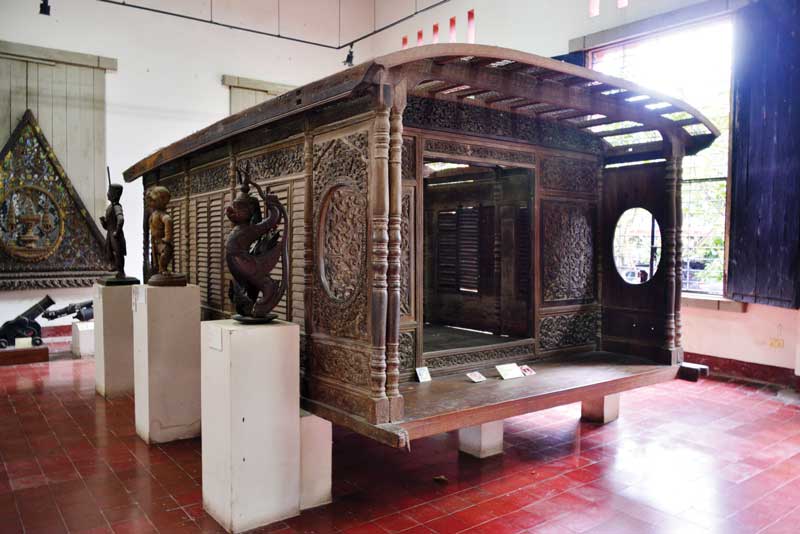 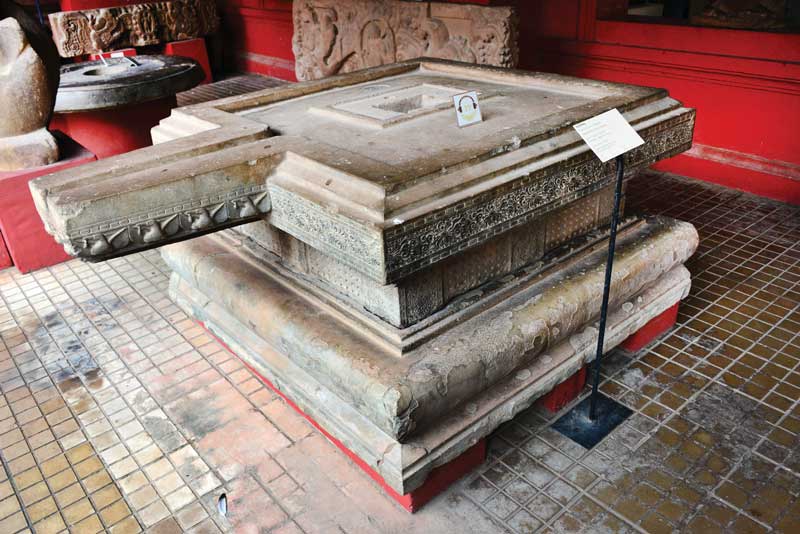 The National Museum of Cambodia was built between 1917 and 1924, and was inaugurated in 1920. The original design was complemented in 1924, when wings were added at each side of the façade—detail that further enhanced its already impressive aesthetics. In 1968, Cambodian architect Vann Molyvann supervised the renovation of the building.

The museum remained closed between 1975 and 1979, during the rule of the Khmer Rouge, only to reopen its doors on April 13, 1979. Inside, four 2,800m2  exhibition galleries guard a thousand years’ worth of art, a collection that is comprised of sculptures, ceramics and prehistoric pre-Angkorian, Angkorian and post-Angkorian objects. The institution’s main goal is to raise awareness and understanding of this heritage through the presentation, conservation and custody of the valuable works it houses. 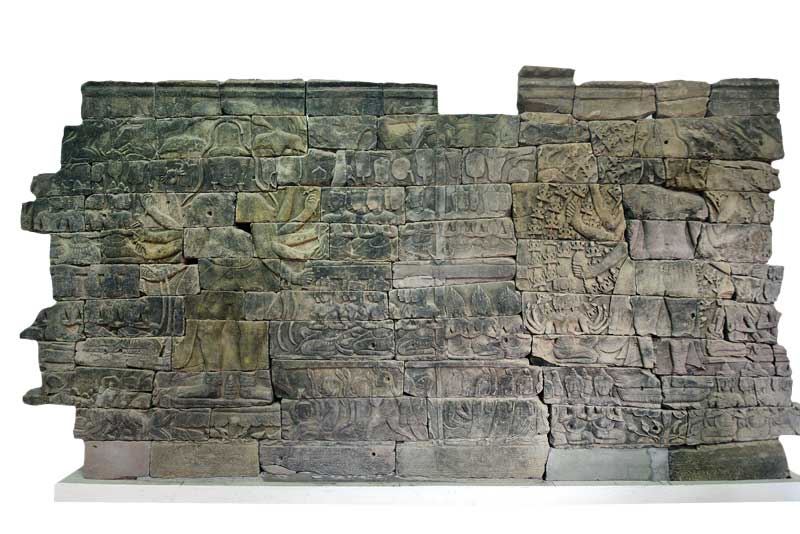 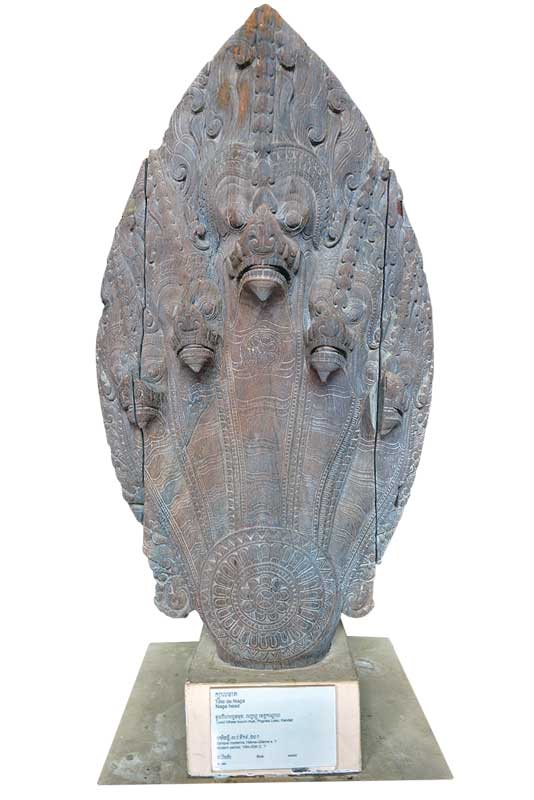 The museum is located very close to the Royal Palace—another architectural jewel that deserves a visit. Among the most significant pieces in these collections is a relatively intact bronze sculpture of Vishnu (second person of Hindu Trinity), recovered from the western temple of Mebon, near Angkor Wat, in 1936. The pre-Angkorian collection is represented by an Indian sculpture from the 5th to 8th centuries. Another impressive statue of an eight-armed Vishnu from the sixth century, found in Phnom Da, is also exhibited. The Angkorian collection contains several statues of Shiva “the auspicious” from the 9th, 10th and 11th centuries respectively; a pair of giant fighting monkeys (Koh Ker, 10th century); a beautiful stone stele from the 12th century, originally from the province of Oddar Meanchey, portraying scenes from the life of Shiva, as well as the sublime statue of King Jayavarman VII, which belongs to Angkor Thom since the late 12th century.

Other rooms show samples of ceramics and bronze pieces that come from the pre-Angkorian periods of Funan and Chenla, from the 4th to the 9th centuries, the Indravarman period (9th and 10th centuries), and the classical Angkorian era (10th-14th centuries). You can equally appreciate more recent works, such as a beautiful wooden barge. The collection of bronze objects includes the Buddhist triad, an ornate Buddha in a standing position, and a reclining Vishnu. The area dedicated to ceramics contains some archaeological finds that date back to the Neolithic period (5,000 BC), among other objects made of stone, wood and stucco. 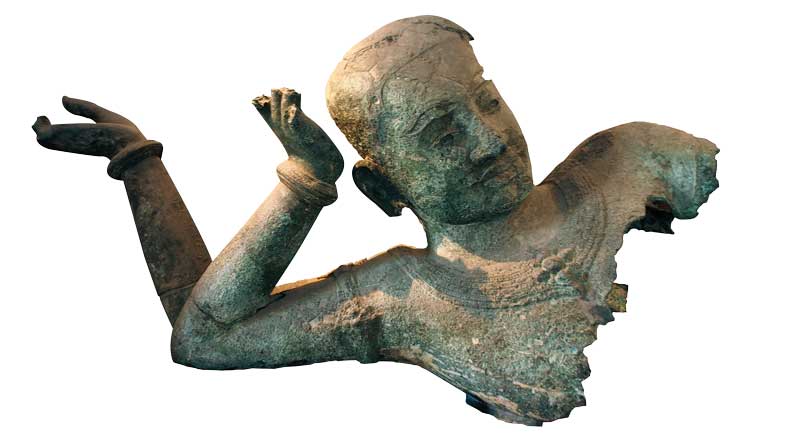 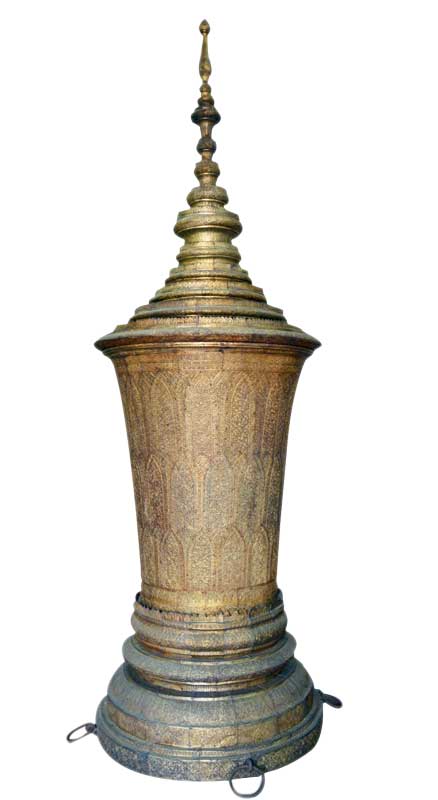 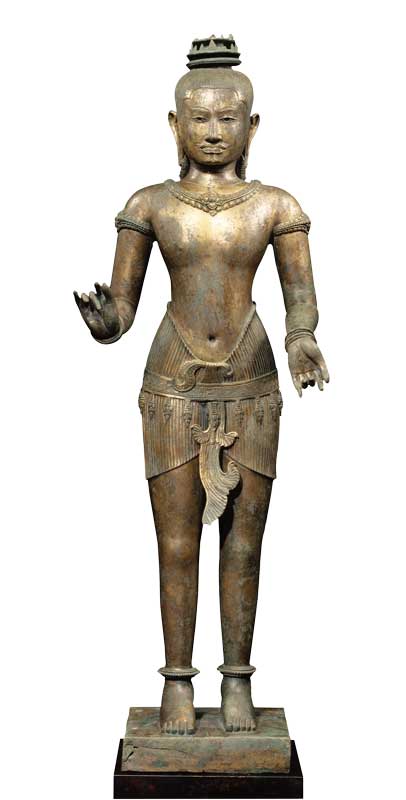