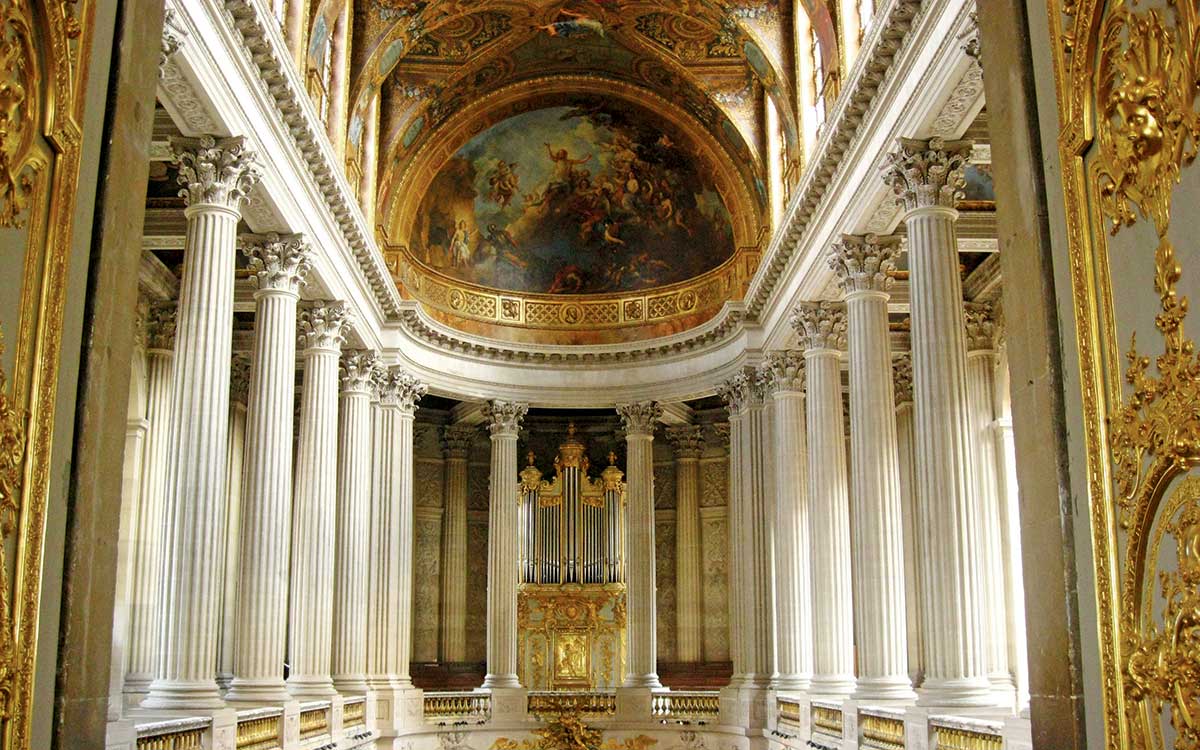 Landmark of Monarchic Beauty and Extravaganza

It’s difficult for us to imagine that the most recognized palace in the west, the symbol of absolutism, was once a humble private residence. It was in these northern lands of France that, on August 24, 1607, King Louis XIII arrived to explore the woods that were teeming with pheasants, wild boars, and deer at the time. In 1623, he decided to build a hunting lodge, which opened its doors in 1624. Maréchal de Bassompierre, a French courtier, upon gazing at the building,  dismissed the residence as one that, “a mere gentleman would not have been overly proud of its construction.” In 1632, Louis decided to rebuild it. But it wouldn’t be until 1634 that the foundations of the palace that we know today would be laid. 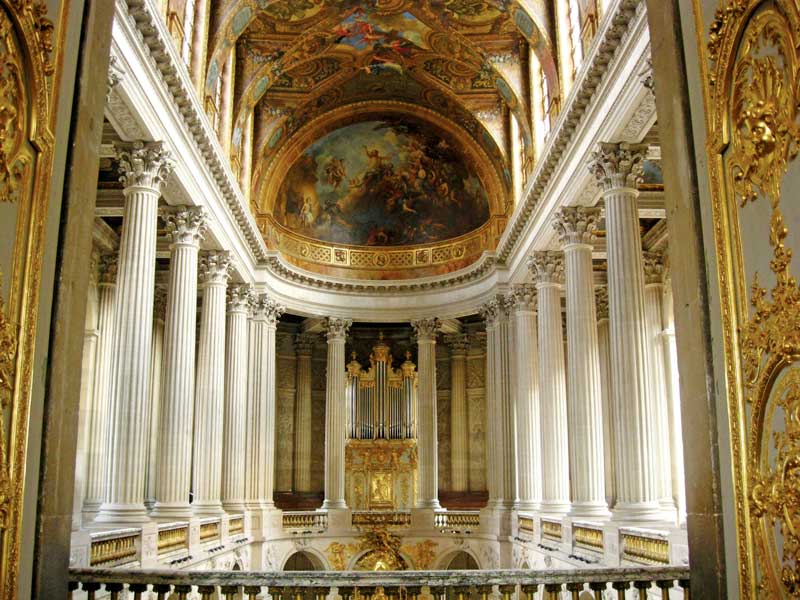 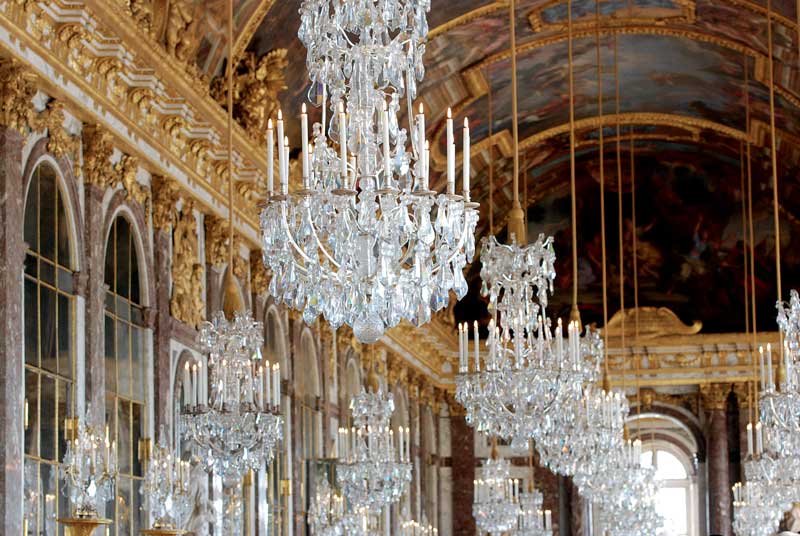 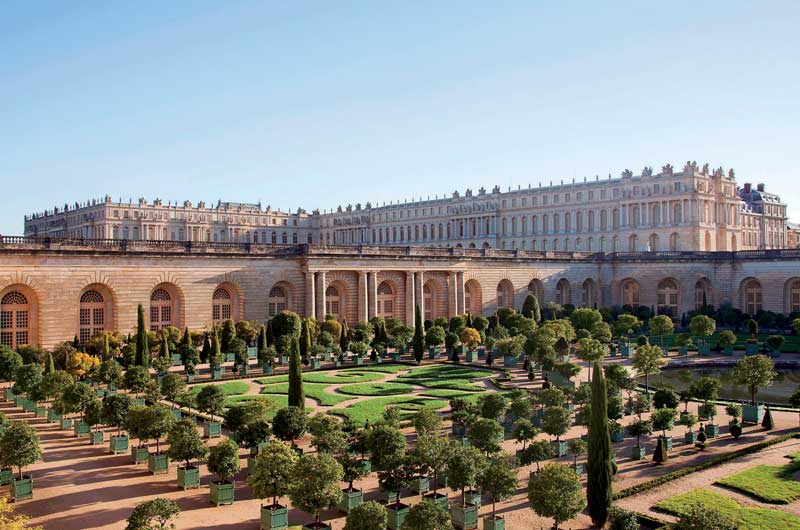 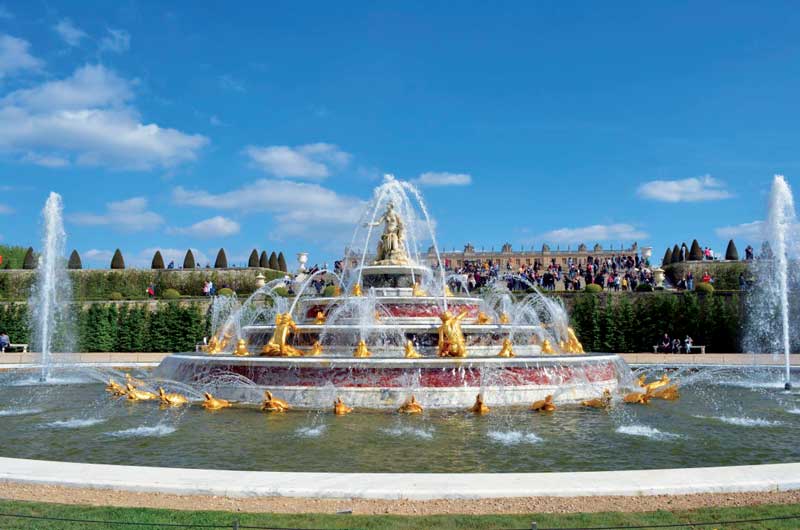 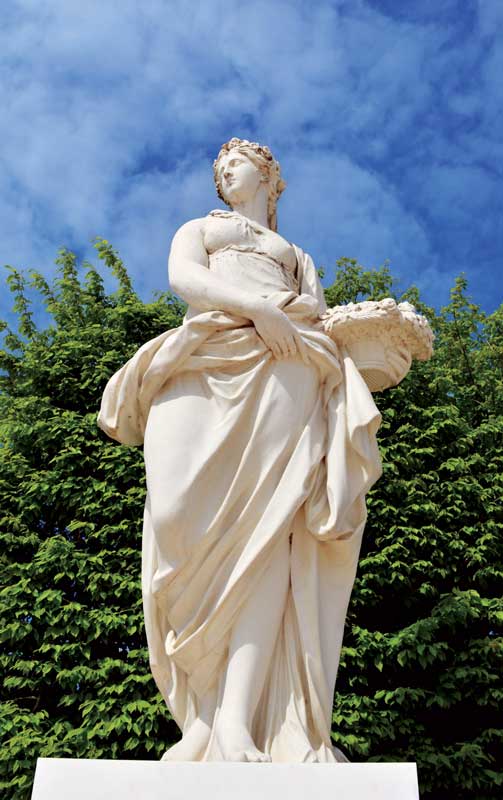 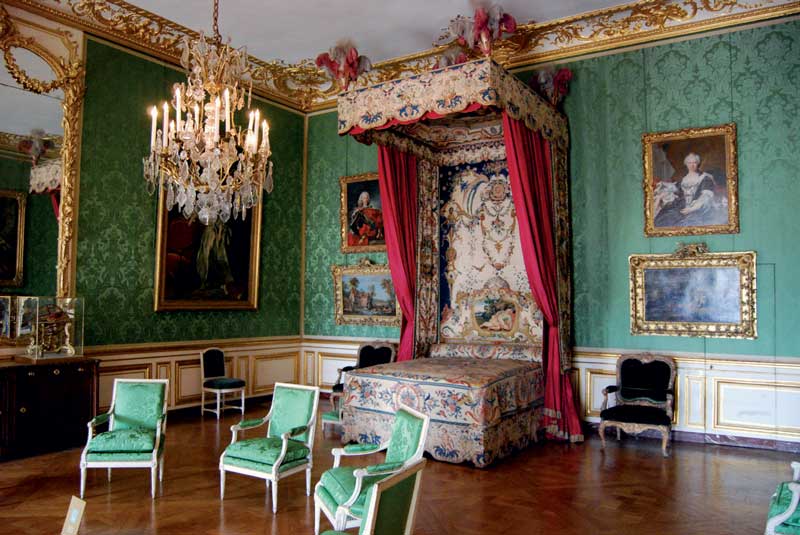 Circumstances changed radically when Louis XIV came to power. The young King felt an immediate attraction for Versailles, and contemplated a construction project vastly bigger than the one undertaken by his father. The first phase of expansion was designed and supervised by the architect Louis Le Vau. Le Vau added two wings to the esplanade: one would serve as kitchen and housing for servants, and the other as a stable. In 1688, three new wings were built, and the palace’s grounds were tripled. Decorations took a sharp turn towards themes of Apollo—the sun god and the king’s personal emblem—and it became an omnipresent aspect of Versailles. Due to his love for gardens, Louis XIV orders their enlargement and has them decorated with sculptures by artists such as François Girardon and Le Hongre.

Le Vau was inspired by Italian models for the construction of what would be known as “The New Palace.” The Italian renaissance continued to have a huge impact on French architecture. Its Baroque style is characterized by its extravagance, which directly appealed to Louis XIV. The western façade was outfitted with a colossal terrace which connected the King’s pavilion, to the north, with that of the Queen, to the south. The King’s Chamber was built in the heart of the palace, a way of announcing that all would revolve around him.

In 1670, Le Vau dies, and Jean-Baptiste Colbert, the Minister of Finance, tasked architect Francois d’Orbay to continue with the construction. In quick succession, d’Orbay built fourteen new mansions to accommodate the growing number of courtiers. It was in 1677 when the king decided to personally manage the state’s affairs from Versailles, and to centralize his administration in the palace. Architect Jules Hardouin-Mansart was forced to draw up new projects for the relocation of the court that year.

Between 1678 and 1684, the iconic Hall of Mirrors was built with the purpose of dazzling the King’s guests—a masterpiece of Baroque design, 73 meters long and 10.50 meters wide. 17 windows would allow natural light to stream in and reflect on the 357 mirrors placed facing one another. It was an instant sensation: for the first time, guests could contemplate their full bodies.

A bona fide construction fever paved the way for the expansion of The Orangerie between 1685 and 1689—where 3,000 shrubs and 150,000 ornamental seeds were planted—in addition to new stables The Grand Canal, and another northern wing for courtesans. The palace’s façade measured 670 meters at this point. It wouldn’t be until 1710, with the completion of the Royal Chapel, that Louis XIV dominion over the palace would begin to fade. Assailed by multiple aliments, he would gradually retire from court life until 1715, the year of his death, which put an end to the “Great Century.” 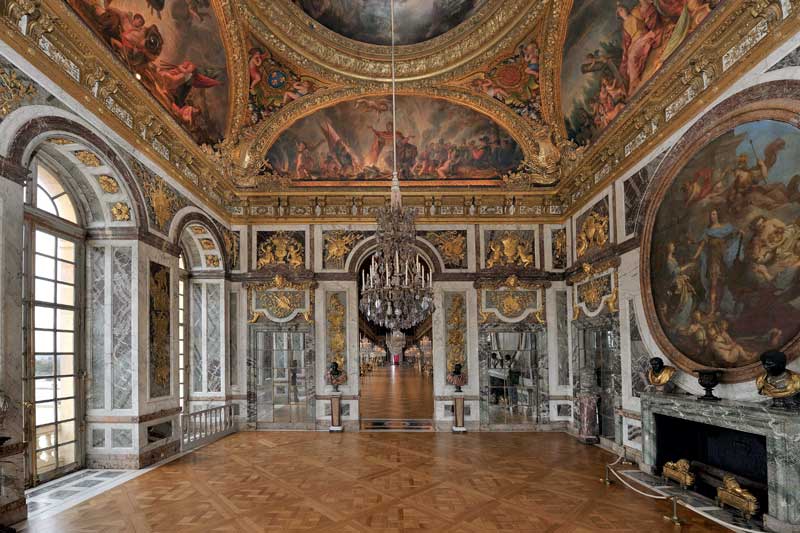 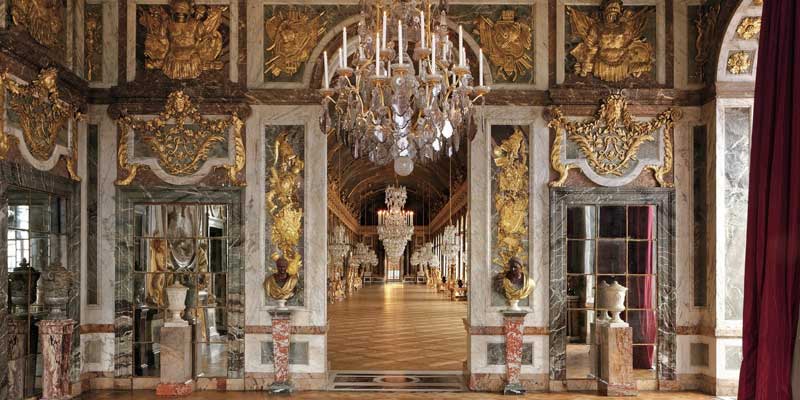 The palace never shone as brightly again. Louis XV was a mere boy when his great-grandfather, the Sun King, died, and Philippe II, Duke of Orleans, the Regent, left Versailles with the future King and made the Palais-Royal in Paris his home. The court was moved to Tulle. At this point, Philippe even considered demolishing Versailles.

When Louis XV was twelve years old, he returned to the palace. But unlike his great-grandfather, he felt no great affection for it, and would retire to some of the smaller chambers. He enacted a series of reforms which would lead, first and foremost, to the demolishment of the Ambassador’s Staircase. The only notable constructions during this period were the Salon of Hercules, the Opera, and the Petite Trianon.

Although the palace preserved its splendor during this era, the reign of Louis XV saw the demo- lishment of many of Louis XIV commissions. However, the King was responsible for numerous decorations deemed magnificent, and for enriching the gardens, and commissioning the French Pavilion in the Petite Trianon.

After the revolution, the palace was overrun by the mobs and Versailles was abandoned. After the fall of the monarchy in 1792, it was sacked. Napoleon toyed with the idea of converting it into an imperial palace, but the ongoing war kept him away from France. It wasn’t until King Louis-Philippe tasked Minister Camile Bachsson to turn Versailles into a museum that Versailles was newsworthy again.

In 2003, a new restoration initiative, known as the “Grand Versailles” project, restored over 10,000 trees and other damages sustained by Hurricane Lothar. In 2006, the Hall of Mirrors was also restored. Today, the palace is administered by the French Minister of Culture and Communications and is visited by over three million people a year.O 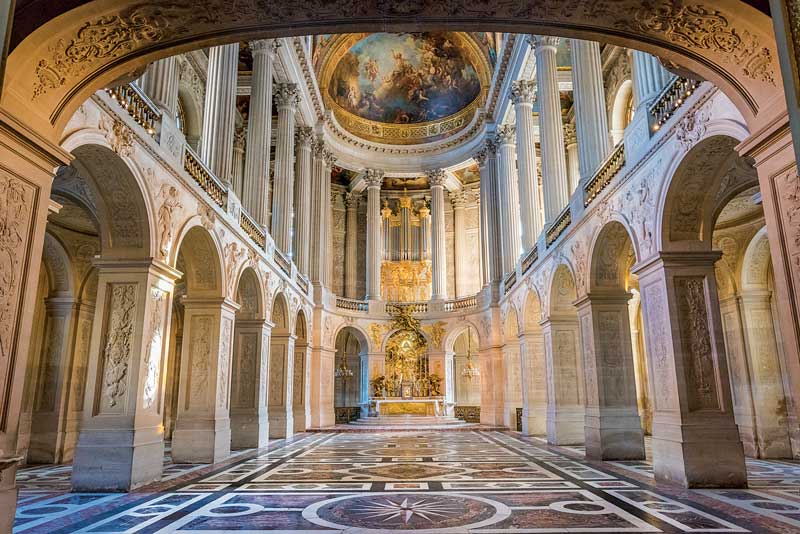 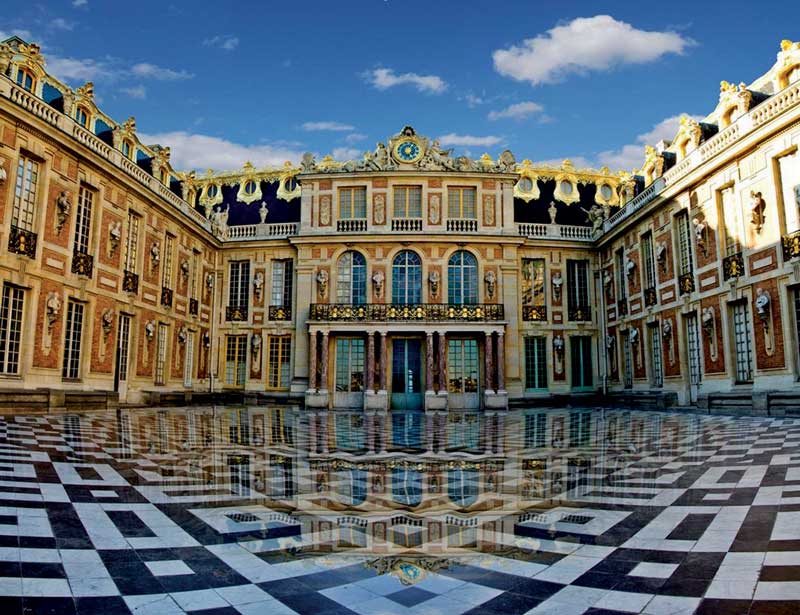 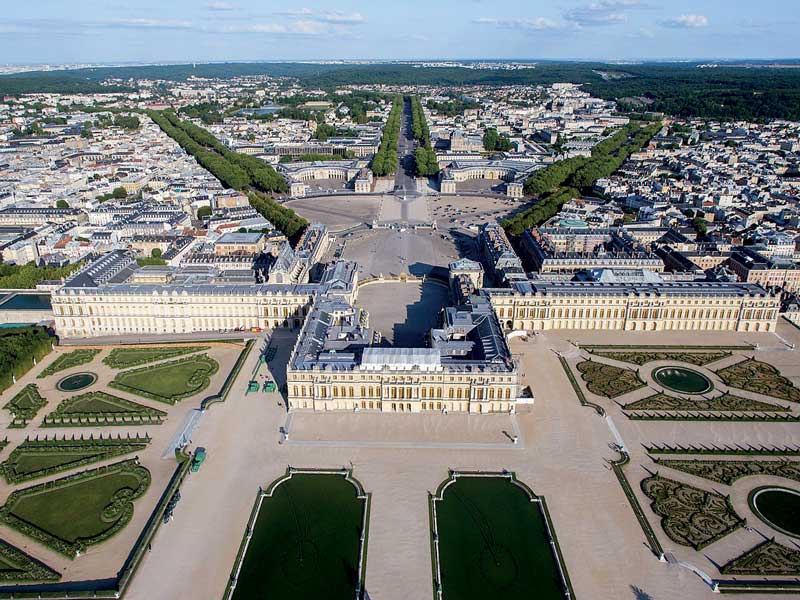 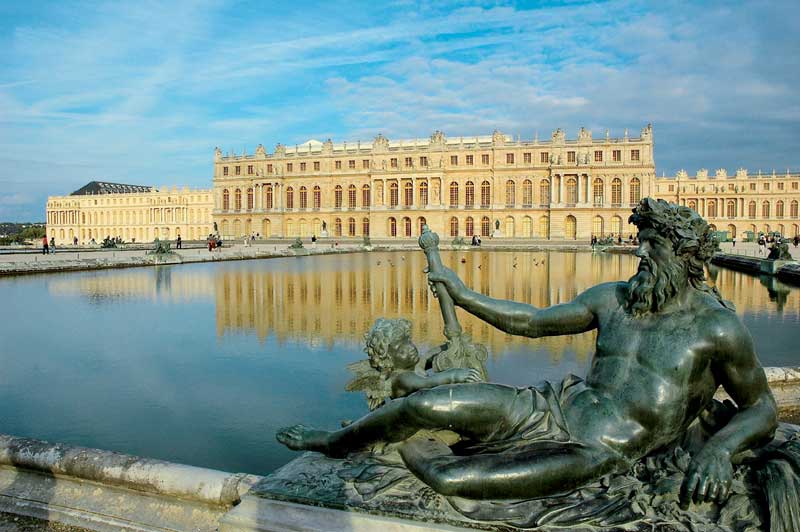