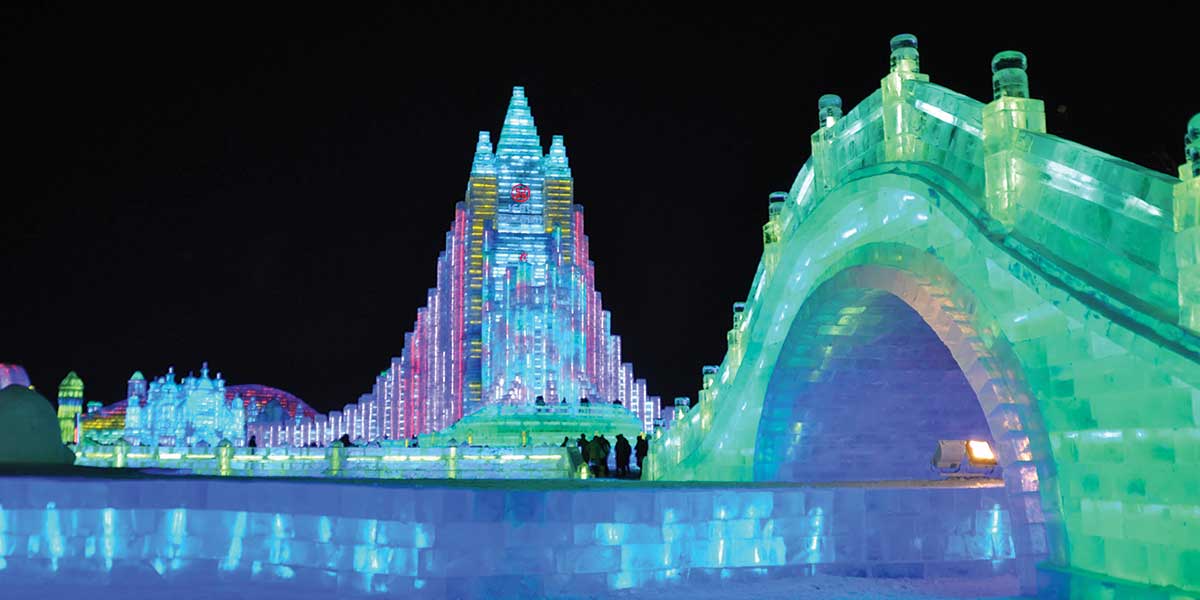 The fine arts do not escape the winter season, since ancient times, the white snowflakes have inspired artists, with original works that have endured in the public taste, while others are as ephemeral as ice. For some, winter means the end of a cycle, while others see it as a time for reflection with a view to returning to daily life with renewed vigor.

Some are ephemeral and others transcend over time

The fine arts do not escape the winter season, since ancient times, the white snowflakes have inspired artists, with original works that have endured in the public taste, while others are as ephemeral as ice. For some, winter means the end of a cycle, while others see it as a time for reflection with a view to returning to daily life with renewed vigor.

At 7,463 feet, at the top of the Italian mountain Kronplatz, architect Zaha Hadid (1950-2016) “buried” the Messner Mountain Museum, where the history of mountaineering is on display, along with the exploits of mountaineer and expeditionary Reinhold Messner (1994).

Zaha Hadid, the first woman to receive the Pritzker Architecture Prize in 2004, sought to blend the architectural forms into the environment. The result was the first structure on the summit of a South Tyrolean Mountain, which in winter is buried in snowand receives many visitors as one of the most popular ski resorts.

To give it the desired contour, the exterior and interior were made of concrete, which fit perfectly with the rock of the mountain. The building was built underground to interfere minimally with the landscape… and with the tone of the concrete, the goal was achieved.

The Stanley Hotel, in Denver, Colorado, inspired Stephen King to write The Shining. 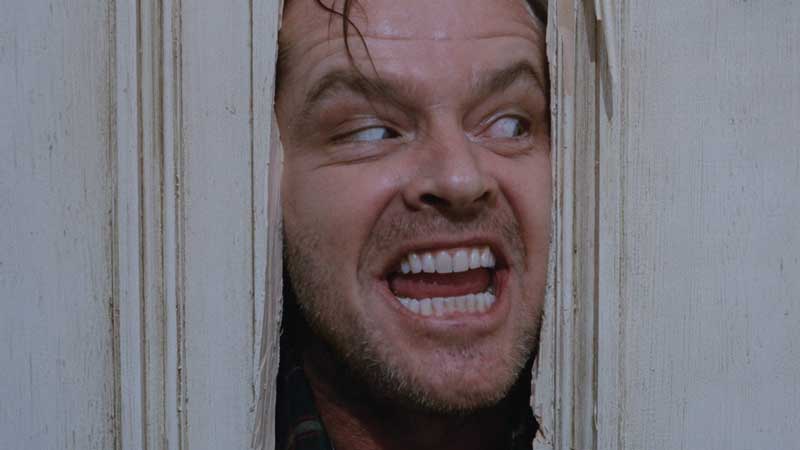 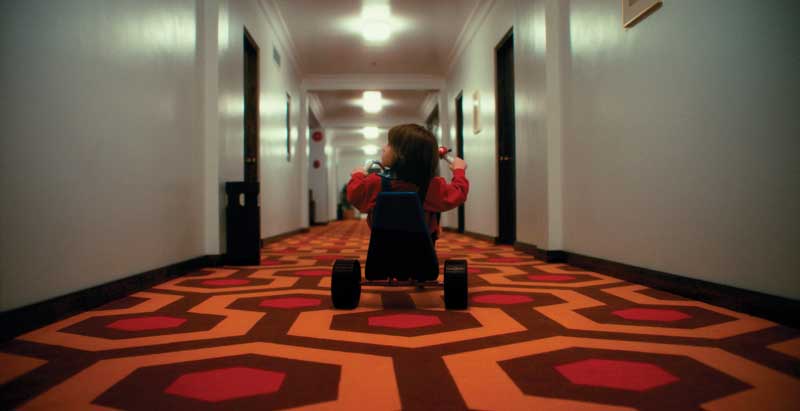 Dany Torrance in one of his sinister tours.

There is no better place than an extreme winter to set a horror movie like The Shining (1980), directed by Stanley Kubrick (1928-1999), based on a screenplay of Stephen King’s book of the same name. The plot takes place in a snowy environment, in the fictitious Overlook Hotel. In the end, a snowstorm becomes the executioner of the deranged Jack Torrance, played by Jack Nicholson.

On release, the film was not the blockbuster it was expected to be, receiving no Academy Award nominations from the Academy of Motion Picture Arts and Sciences; instead, it was shortlisted for the Razzie Awards for Worst Lead Actress (Shelley Duvall) and Worst Director.

In 2018, the film was redeemed by being deemed, by the Library of Congress, to be “culturally, historically and aesthetically significant", and selected for preservation in the National Film Registry, becoming the sixth Stanley Kubrick film to be inducted into that registry. 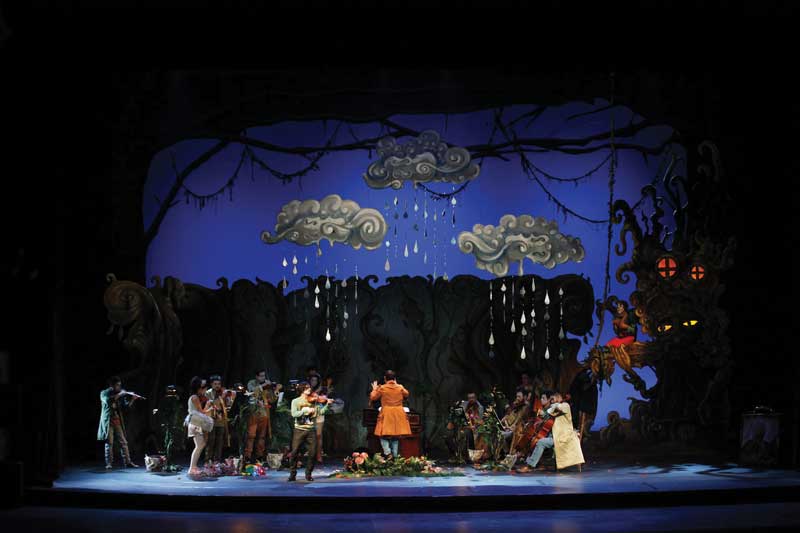 The Nutcracker ballet is a classic of the winter season. Around the world it is performed by different companies. 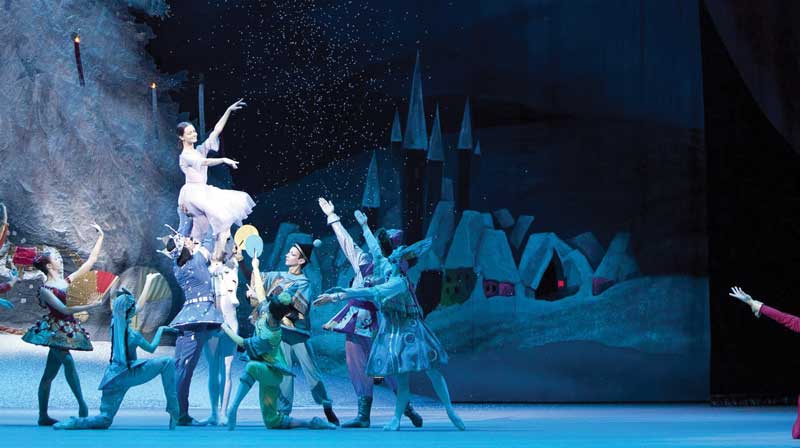 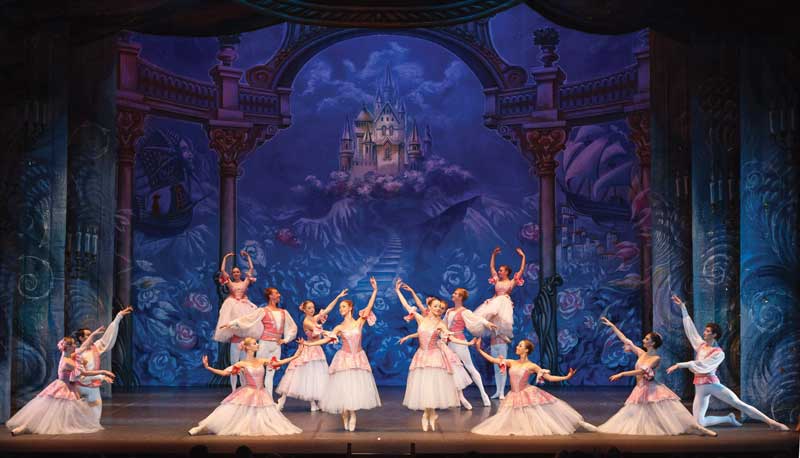 The winter season is not complete without the ballet of The Nutcracker, with music composed by Russian Piotr Ilich Chaikovski (1840-1893) and choreography by Marius Petipa and Lev Ivanov. The libretto is the work of Iván Vsévolozhsky and Petipa, based on the book The Story of a Nutcracker by Alexandre Dumas, who at the same time wrote his book in an adaptation of Ernst Theodor Amadeus Hoffmann’s short story The Nutcracker and the Mouse King.

The Nutcracker debuted in 1892, in St. Petesburg, Russia, and tells the magical adventure of Clara and the Nutcracker that is given to her on Christmas Eve. At midnight, Clara wakes up and discovers that the mice, led by the Mouse King, have invaded her living room, and the Nutcracker comes to life, and the fight begins, with the final defeat of the rodents.

The second act is remembered for The Dance of the Sugar Plum Fairy, in whichPiotr Ilich Chaikovski included the playing of the chords of the celesta, a percussion instrument that produces a sweet and celestial sound, hence its name.

With something as sensitive as ice, unique sculptures can be shaped, with a life as ephemeral as the winter season. Every year in Harbin, in northeastern China, near the Russian border, the Harbin International Ice and Snow Sculpture Festival has been held since 1963, taking advantage of the cold winds from Siberia.

The visitor must be prepared to experience extreme cold that at night reaches up to -13 °F; the atmosphere is freezing, but the spectacle of the gigantic structures molded only with ice and illuminated inside are worth it.

The site is divided into Sun Island, where huge ice figure are exhibited and Ice and Snow World, which opens its doors in the afternoon and evening to showcase the constructions. The festival entered the Guinness Book of World Records in 2007, after presenting the world’s largest sculpture, 250 m long and a volume of 459,090 cubic feet of snow, showing Niagara Falls and the Bering Strait. 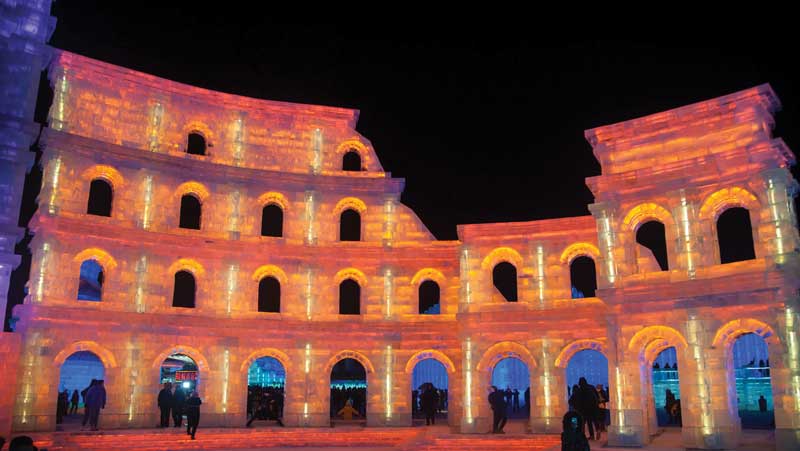 The spectacular constructions of the Harbin International Ice and Snow Sculpture Festival. 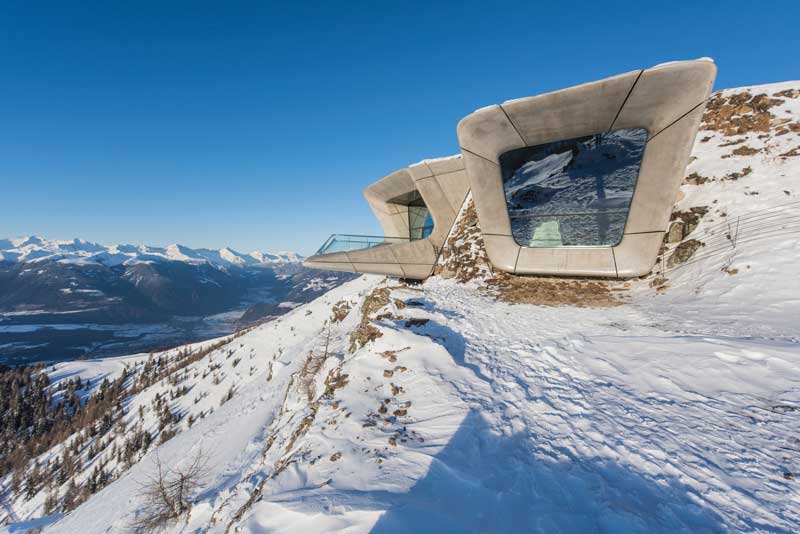 The Messner Mountain Museum, a legacy of Zaha Hadid. 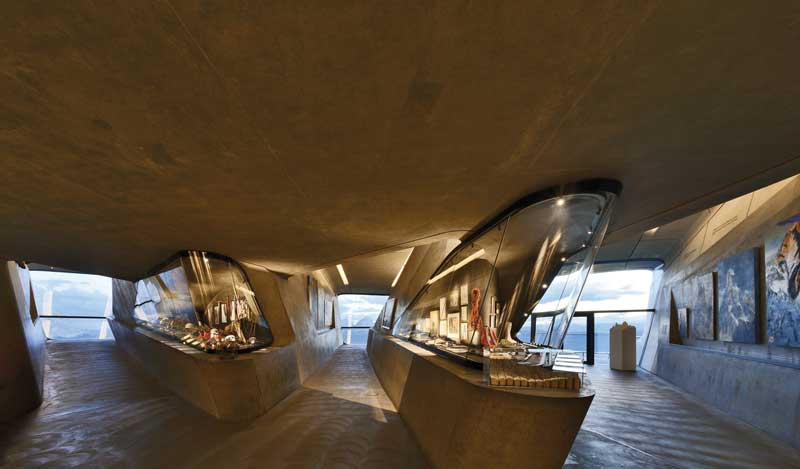 The Messner Mountain Museum, a legacy of Zaha Hadid.

Winter (L’inverno), concerto in F minor, op. 8 no. 4, RV 297, from The Four Seasons by the Italian composer Antonio Vivaldi (1678-1741), includes poems, in a combination of music with narrative elements that transport the listener to the end of the year in the northern hemisphere.

The concerto consists of Allegro non molto (in F minor), Largo (in E major), and Allegro (in F minor). In the poetic composition of Allegro non molto, Antonio Vivaldi shares the sensation of cold: Accompanied trembling between icy snow; To the severe Spiral of the Horrid Wind; Running, beating his feet every moment; And by the Overflowing gel beat their teeth.

In Largo, he alludes to the parsimony of the instant: Passing to the fire the quit and contended ones; While outside the rain pours down. And ends with Allegro, in which he lives the joy of the winter season: Let’s walk on the ice at a slow pace, for fear of stumbling and falling; Strong walk, slip, fall to the ground, quicken the pace on the ice lest it break; Hear howling behind the tightly closed doors how the cold north winds blow through the house despite being locked… this is winter, bringing joy. 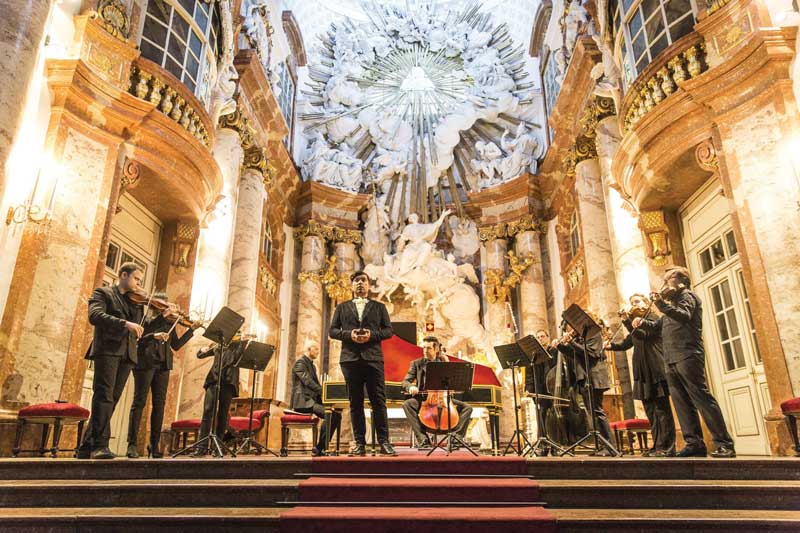 Winter, of Antonio Vivaldi, reminds us of the end of the year season. 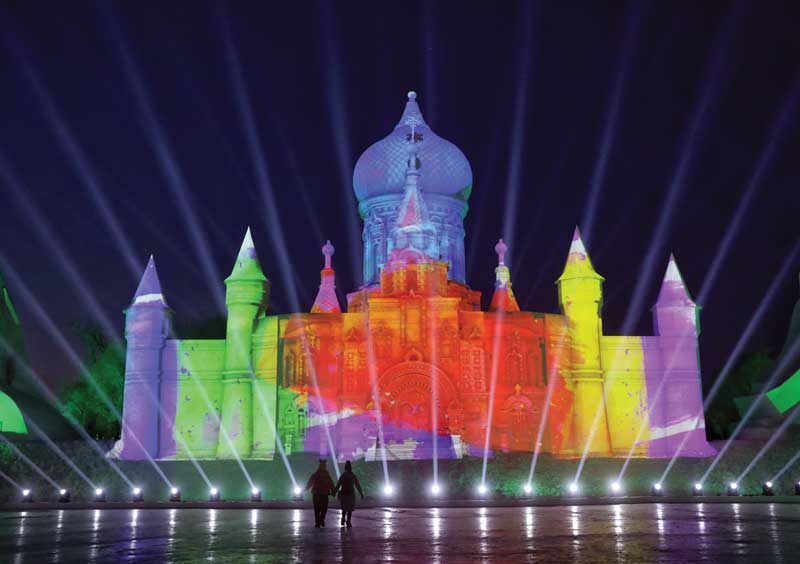 One of the works of the Harbin International Ice and Snow Sculpture Festival.

“The train came out of the long tunnel into the snow country. The earth lay white under the night sky…” Thus, begins Snow Country by Yasunari Kawabata (1899-1972), who, for this work and two others, was awarded the Nobel Prize for Literature in 1968, the first Japanese to receive the Swedish award.

Snow Country, or “Yukiguni” in Japanese, began to be published in 1935, with regular installments until 1937; in 1948, the novel was presented as a book, when the author integrated the previous nine chapters.

The book is set in an area of heavy snow winter, where the protagonist, Shimamura, is captivated by Komako, a mountain geisha who works in an onsen (a place where traditional Japanese thermal baths are offered) and the presence of Yoko. It is the story of an unrequited love, with a constant description of the desolate winter landscape and snowfalls thar lead to a tragic outcome.

The snow is not the main focus, it is the colorful countryside that endows the picture with life; the initial buds are emerging and that is appreciated. In the background reinforces the winter season with the snowy peaks of the Montmajour mountains.

Like Vincent van Gogh’s more than 800 paintings, Landscape with Snow was not critically acclaimed until his death, thanks to the work of his brother Theo van Gogh, who supported Vincent’s career, and Johanna Gezina van Gogh-Bonger, Theo’s wife. Today, the painting is part of the holdings of the Guggenheim Museum in New York, where it is on display. 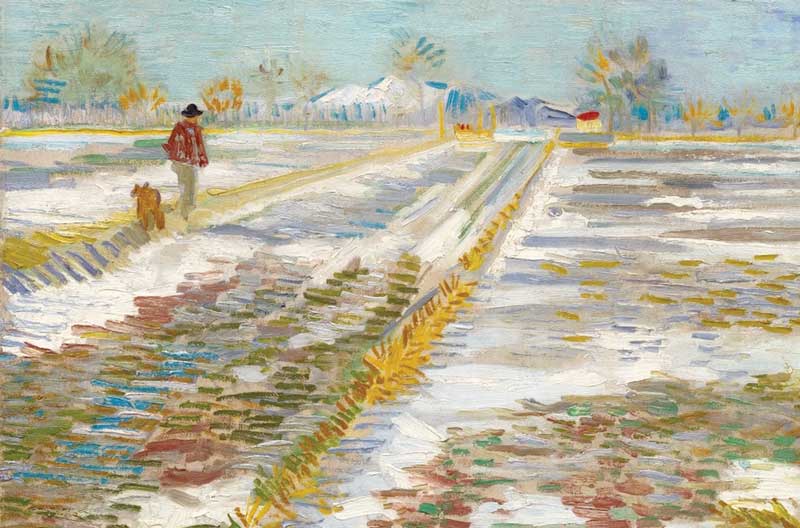 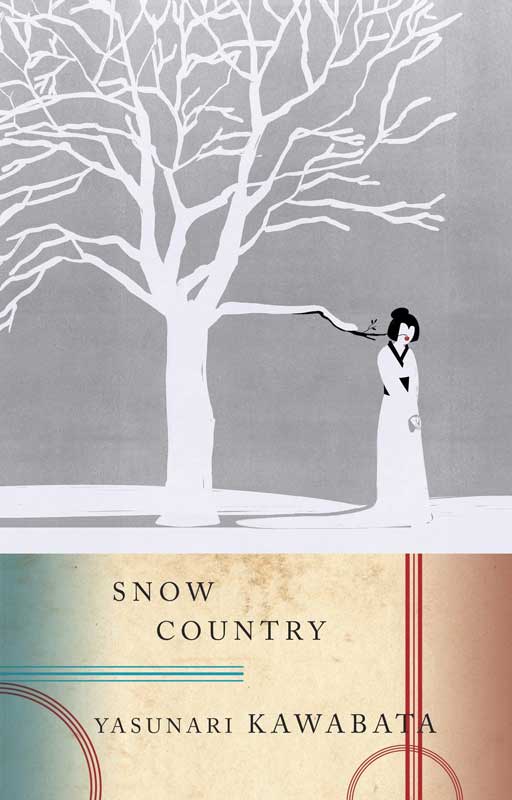