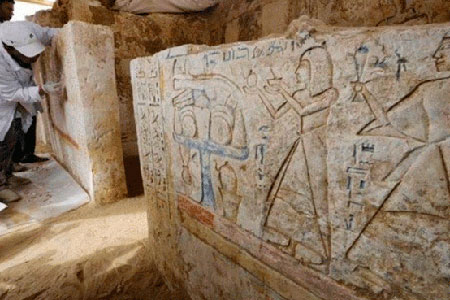 A group of Polish archaeologists discovered two pieces pharaonic reliefs four thousand years ago in the temple of Serapis Ptolemaic Queen Berenice, on the coast of the Red Sea, Egyptian Minister of Antiquities, the Damati Mamdouh said.

The first piece has a cartridge with the name of King Amenemhat IV, which was characterized by the exploration of turquoise and amethyst gemstones, while the second, heavily damaged, requires restoration.

Other findings include three burials from the Roman era, along with parts of the facade of the temple of Queen Berenice.