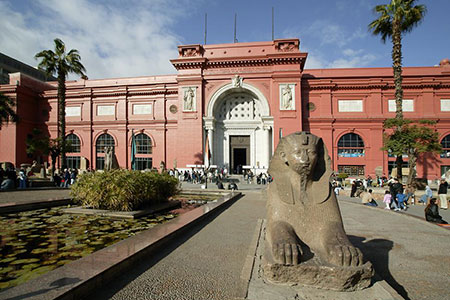 A leather manuscript more than 4,000 years old has been painstakingly reconstructed by a scholar after it was rediscovered in the Egyptian museum in Cairo.

Containing religious spells as well as colourful depictions of divine and supernatural beings, predating those found in the Book of the Dead manuscripts, the leather roll is around 2.5 metres long, with text and drawings on both sides. It is both the longest surviving leather ancient Egyptian manuscript and the oldest, according to Egyptologist Dr Wael Sherbiny, who found the roll in a mix of small and large fragments on the Cairo Museum’s shelves and announced his discovery at the International Congress of Egyptologists in Florence.

“The document was completely forgotten, probably because those who had direct contact with it died during or right after the second world war. Since then, it was stored among hundreds of other manuscripts and ancient papyri in the Cairo Museum,” Sherbiny said. “The moment I laid my eyes on the manuscript, I was thrilled.”