The Auction of "Woman with a Beret and a Plaid Dress", by Pablo Picasso, Breaks Records 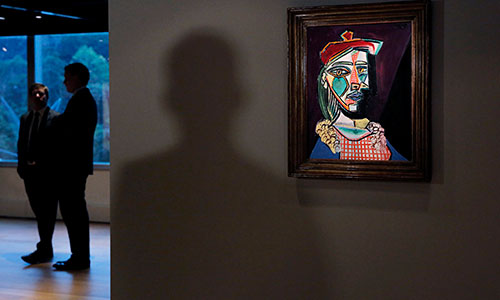 The result of the February 28, 2018 auction, in London, held by the prestigious Sothesby's auction house, of painter Pablo Picasso’s 1937 work: "Woman with a Beret and a Plaid Dress", in which the artist portrays Marie-Therese Walter—whom he considered his “golden muse”—was auctioned for 56.7 million Euros. According to Sothesby's statement, it is the highest bid for any painting in Europe.

In addition, other two of his works, "El matador" (1970) and "Deux femmes assises", were auctioned: (1908), for a total of 83.2 million euros. The auction, from  Impressionist & Modern & Surrealist Art, and which included works by Salvador Dalí, Umberto Boccioni, Alberto Giacomett and André Derain, achieved total sales of 154.7 million.