Diving with sharks is an unusual experience

In Australia, one of the most remarkable sensations is to share the ocean with the sharks, at the end of March and until mid-July you can live the greatest thrill of diving with whale sharks, which despite being over ten meters long, are harmless to humans as they feed on plankton, algae and squid.

Excursions leave from the Exmouth city or Coral Bay to reach Ningaloo, a 260 km reef. Once there you will be able to descend into the Indian Ocean and swim gently next to them, as well as the manta rays and turtles. If you travel between June and November, you can observe the humpback whales on their annual migration from the boat.

You can navigate to Julian Rock, leaving Byron Bay. On this site you must take a short scuba diving course or if you have a license, take your card for immersion up to twelve meters deep in the Pacific Ocean. At the bottom of the sea, you can find leopard sharks in summer and gray reef sharks in winter.

To live stronger emotions, diving into the caves of Fish Rock Island is a privilege. The nurse sharks almost four meters long, are calm as long as they don´t feel threatened, they are slow and are usually at ground level, they feed on crustaceans and mollusks. Inside the cave you can find turtles, guitar sharks, wobbegongs or gray reef sharks and it is admirable to see the shadows of the species reflected in the cracks of the cave.

If we want to keep raising the intensity, we can take a closer look at the world’s largest predator. From Port Lincoln to the Neptune Islands, six people stand on a a large frame that descends to find the great white shark that will swim around the cage. The largest activity of great white sharks is from July to October, they are between four and six meters long and can weigh up to two thousand kilos. 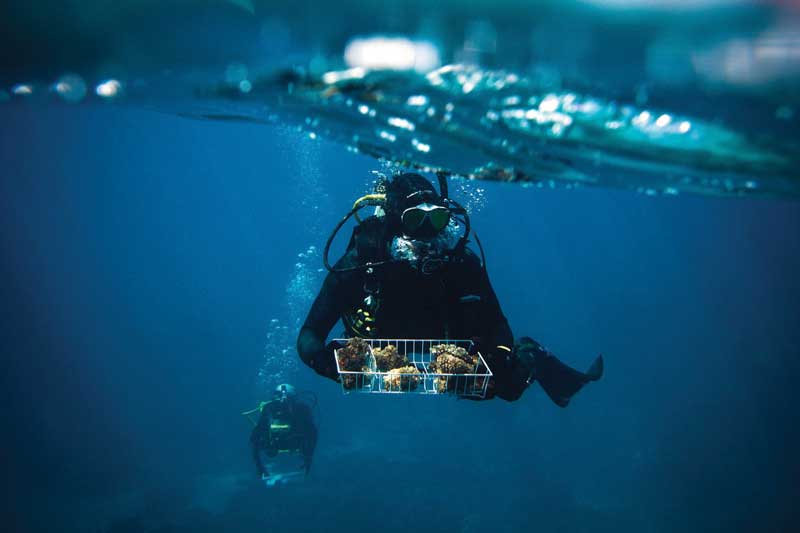 Diving in Australia is one of the most outstanding sports activities.