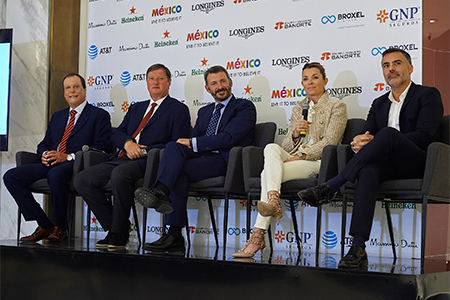 The presentation of the most important equestrian circuit just started its activities in Mexico City. Longines Global Champions Tour Mexico will feature 30 of the best horse riders of the world ranking.

Nino Bauti, designer at Tane -jewelry and art+object company -, is the commissioned to design the trophy for the Champions Tour, as he did with the Mexico Grand Prix for F1. "My design tool was the circle, because it represents the absolute perfection; the beginning and the end, while the concentric circles represent the evolution, discipline and harmony", said to Amura Yachts & Lifestyle: "I wanted to signify the horse almost as a demigod, based on the Greek representations and debugged lines as I could".

Recently, this tour 2016 began at Miami, now is in Mexico, next will be in Antwrep (Belgium) and then going to Shanghai, Hamburg, Madrid, Chantilly (France), Cannes, Monaco, Paris, Carcais (Estoril), Valkenswaard (Netherlands), Rome, Vienna and finally is going to Doha, where the tour ends at November this year.

Francisco Pasquel, director of the event, declares that this circuit has a unique sports parallelism: "It is similar to Formula 1, which goes by cities or countries around the world. The peculiarity here is that it has the best 30 horse riders of the world".

Federico Fernández, horse rider at the Mexican edition said: "It is a privilege to have one of the dates in Mexico. The Campo Marte technical conditions are supreme, and I think it will be a surprise to all horse riders the great Mexican hospitality”.

It is worth mentioning that, as part of Longines Global, there is also a recently created Champions Ligue by Jan Tops, founder of the Champions Tour. The Miami edition just happened in last days, with the participation of Athina Onassis de Miranda -as a horse rider-, granddaughter of Aristotle Onassis, among other riders who are also prominent personalities.