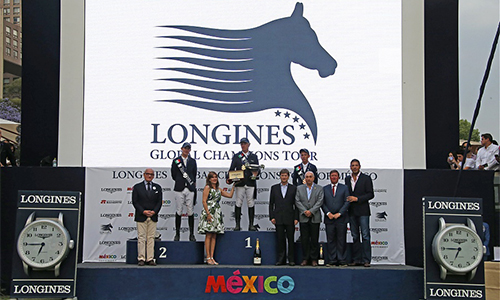 From 14 to 17 April, 30 of the best horse riders in the world competed at the Campo Marte in Mexico City, with the French Roger- Yves Bot as the winner with his horse "Qoud ' Couer de la Loge" of this Mexican first Longines Grand Prix.

The tie gave this victory after beating Belgian rider Jos Velloy, as well as Bertra Alle from Ireland. Meanwhile, the Scottish rider Scott Bradh, who was champion of the 2012London Olympics, won the main class 5 * 1.50 m with zero faults and a time of 35.53. In the same try-out, the Mexican Antonio Chedraui took third place riding his mare La Bamba, with a time of 36.94.

In the team event of the Longines Ligue, the “Shanghai Swans” formation, made by Edwina Tops -Alexander (riding "Ego van orti ") and Janne Friederike Meyer (riding "Charlotta"), were placed on first with a total of 10 points.

Important companies as Azimut Yachts carried out a full coverage of the event, where special jumps and other funded moments by brands like GNP, El Palacio de Hierro, Heineken, among others were also performed.

Now is the turn of Antwerp in Belgium for hosting this tour, which represents the maximum equestrian event of the world, and a decisive key for the next Olympic Games in Rio de Janeiro 2016.