From one side to the other and from stern to bow the blue is dominant. A great part of the specter of this color is used in combination with the oriental type reminiscences, which result in a very interesting mix with timeless details that underline the seriousness of this floating palace named: Blue Eyes.

Following the ideology that characterizes CRN, this is another of its projects -matterthat includes the personalization of each one of the elements  close to the client's requirements, giving as a result a superyacht that leaves us breathless, with 60 meters of continuous surprising details.

The hull is a navy blue color that contrasts perfectly with the white from the rest of the constitution. The scene is complemented with the two subtle red stripes that are found just as marks of the flotation lines, one of them thinner than the other. 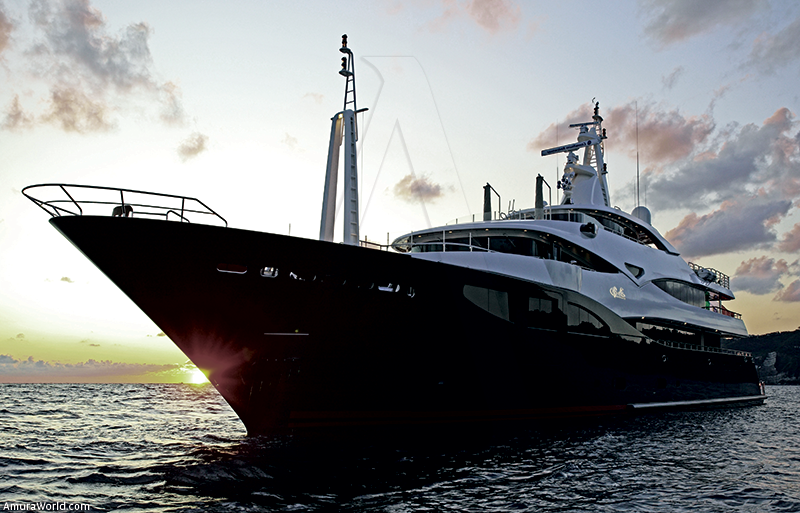 This beautiful silhouette a CRN trait, aptly hides the garage door and the impressive owner cabin's balcony, a detail that has been a trademark.

Another section practically hidden is the "beach club", exactly the stern section that sinks into form a solarium which a is o serves as a swimming platform.

On the inside a female touch is professed and without a doubt is the print that the owner's wife has placed, from the logotype that distinguishes this beautiful y acht, everywhere we have the per- sis tent im press ion that was left from the intensive labor that the owner's wife and all the designer's team of this shipyard made together. 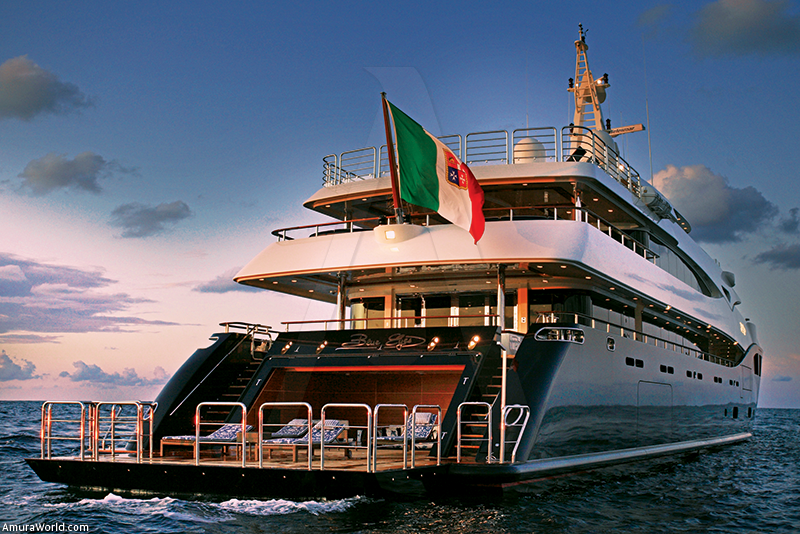 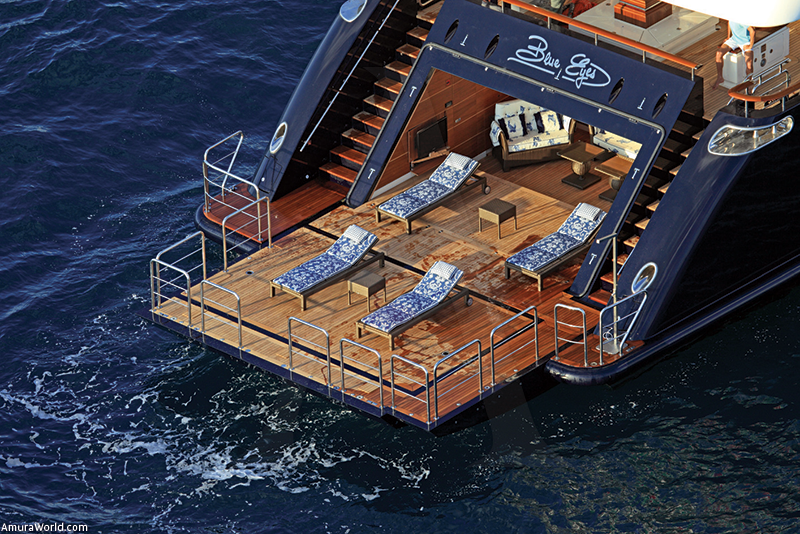 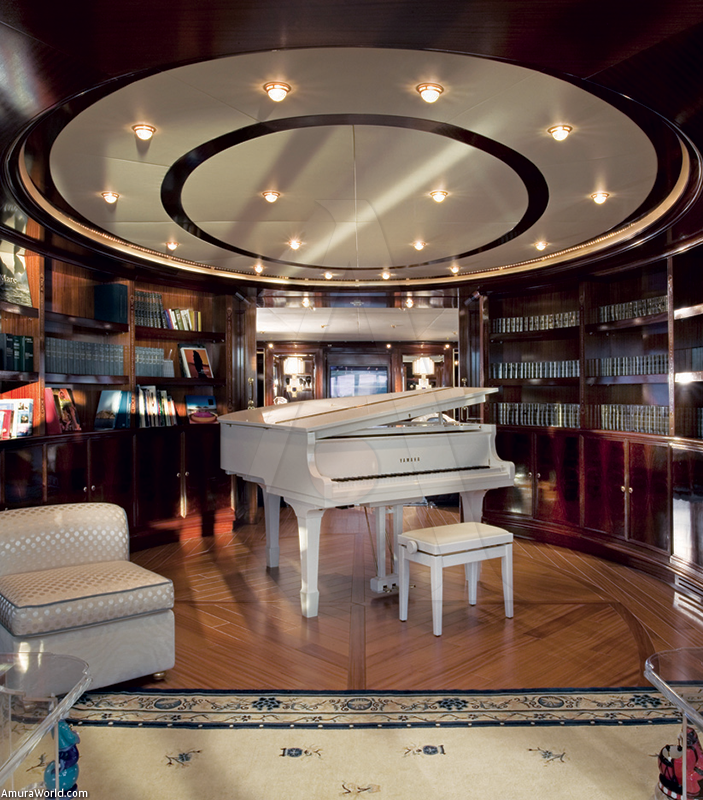 Details like the work that is found in the stern part of the main deck, designed by the owner himself, a crystal globe with Swarovsky incrustations that give a special glow when in contact with the sun light.

The superior deck is the place where the command bridge is found on the bow’s part, followed by the captain's cabin at port and the radio room at starboard, nest to it there's a cupboard at port and a lobby at starboard, right behind the lobby we ding half a bathroom for the guests.

On the port side there's a guest cabin, with a double bed, it has its own bathroom with enough storage space.

Continuing towards the stern we find a panoramic room with a "C" shaped couch at port directed towards the other side. This room is complemented by a couple of game tables, one on each side. 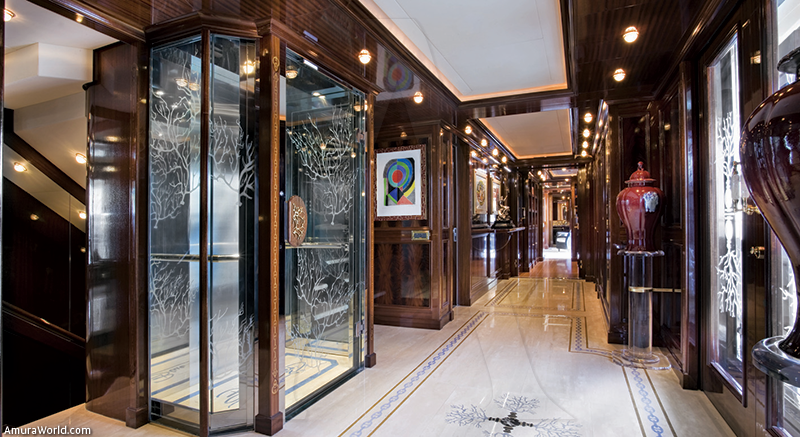 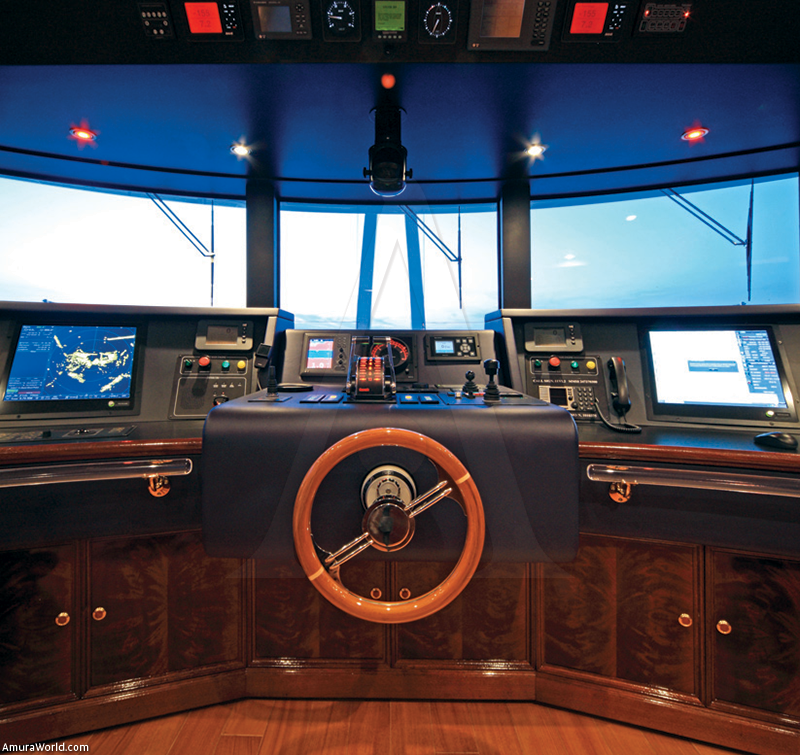 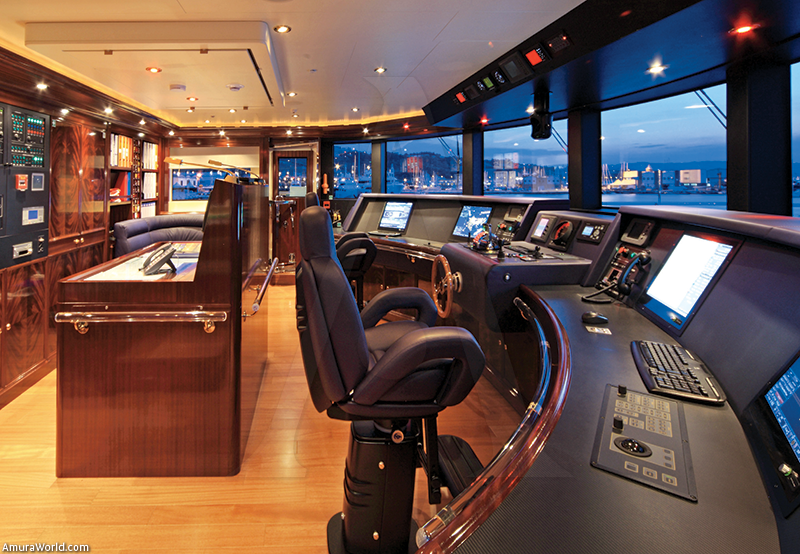 On the exterior part of this level we find a 12 people dining room just as well as two seating areas located in the following corners.

The time has come for the main attraction: the owner's cabin ... A work of art. The balcony is an affirmation of the owner's and his wife's mentality, a way of expressing their intention of enjoying so much of the interior blessings like freedom as well as the exterior blessings, comfort ably coming to get he r with nature.

The inferior deck is where we find the solarium on its covered part there's a couch and a table. There's a garage for the two tenders, towards the bow followed by the control room and the machine room. 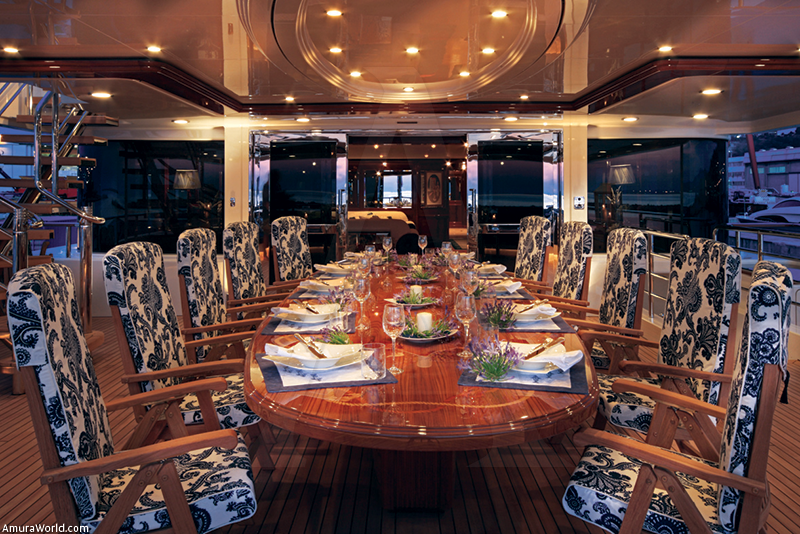 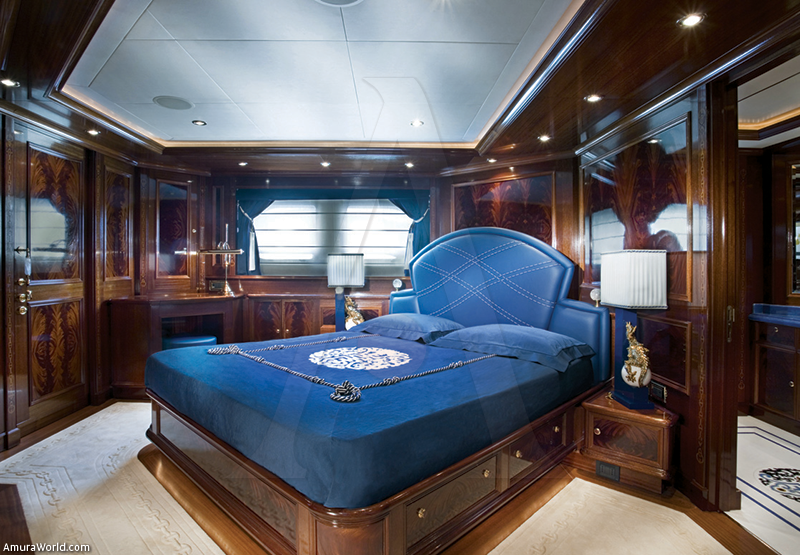 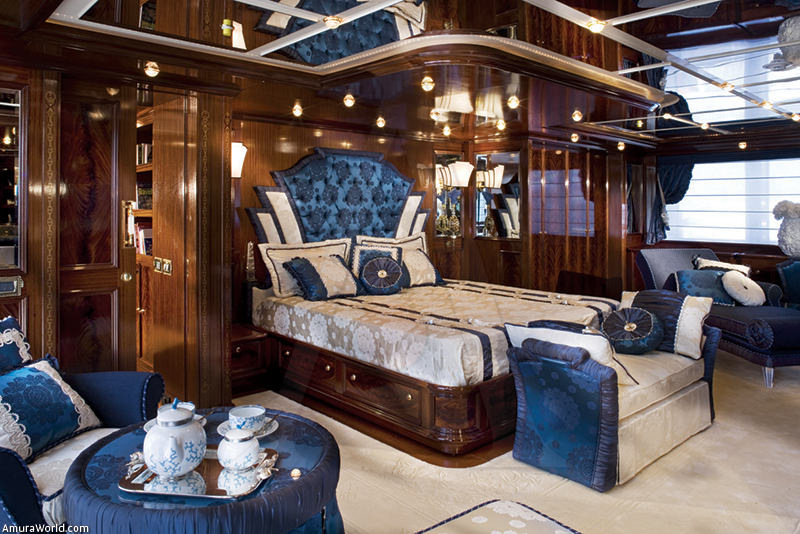 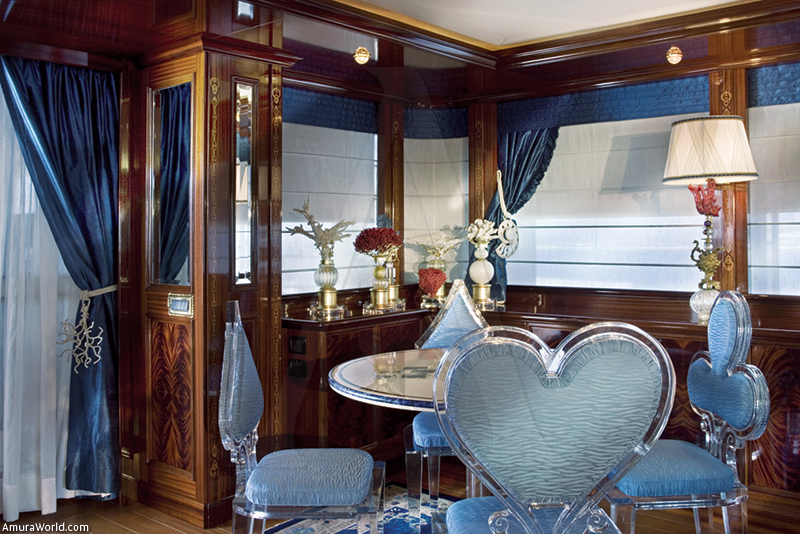 Separated by a noise, heat and vibrations isolating wall, we find on each s ide of the VIP cabin a double bed, placed 45*. each one with their own bathroom, a sofa and a dressing room that in the case of the one at port this last one is bigger. Heading towards the lobby and passing the eleva- tor we find two guest cabins with individual twin beds with their own bathroom and the one at port has a wider dress ing room.

it's worth mentioning that most of the trans- parent furniture is made of Perspex® a plastic material with superior characteristics ofthoseof the cryst al and that can be eas ily molded in order to give it the desired color.

All of this came out to the public on May 2009, being this is the 126 hull number produced by the Ancona, Italy shipyard. 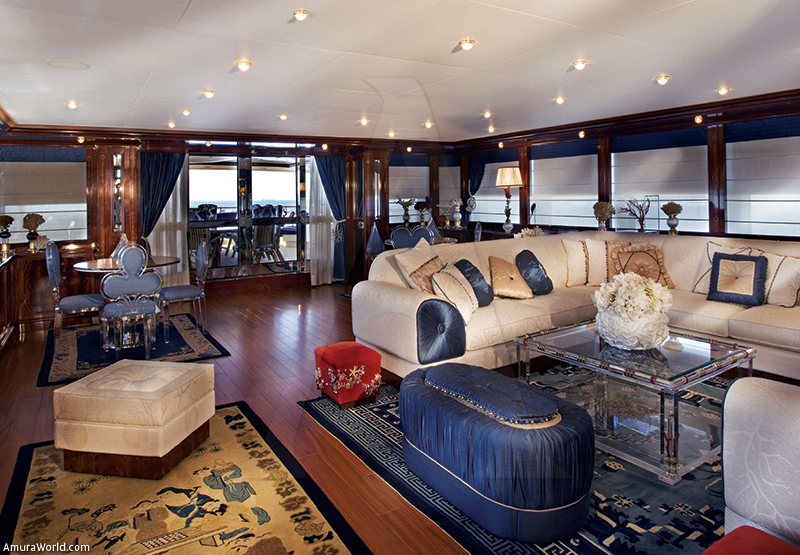 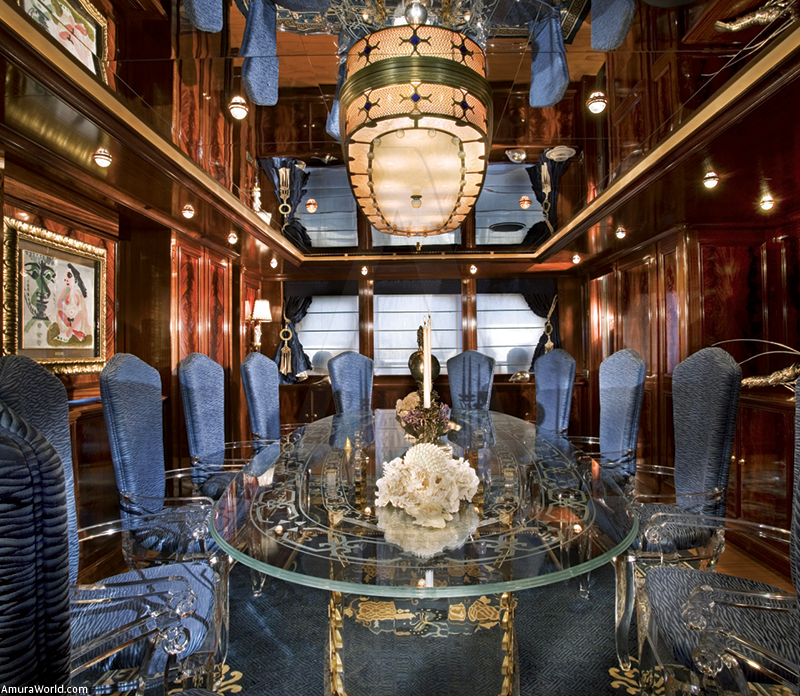 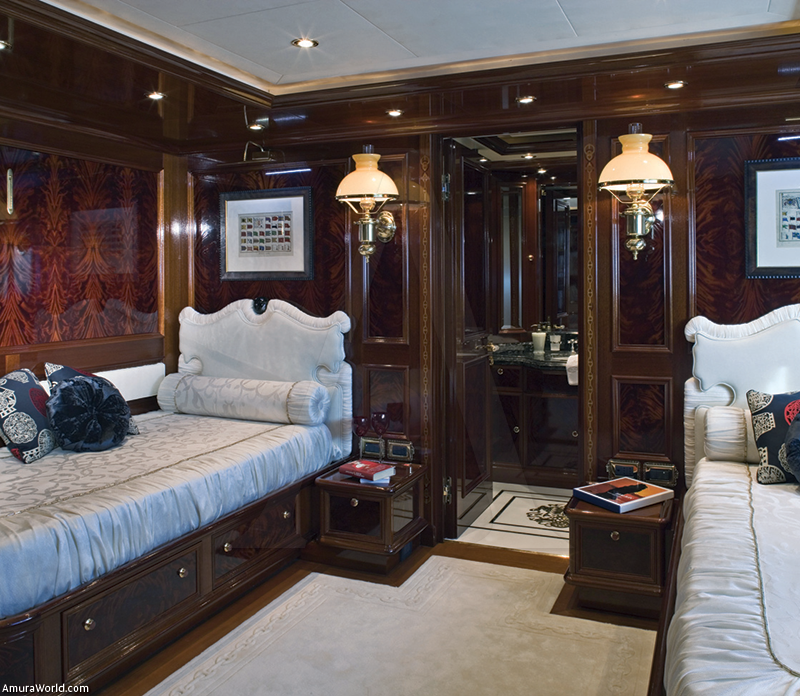