Geography and the image of the world

Without a doubt the sea was one of the first major obstacles faced by men in their journeys. But certainly it has never been a constraint to their ability in overcoming challenges. From the beginning, sailors had the interest to trace the coastline, allowing the beginning of creating the map known by the world today. Perhaps the best examples of this kind of maps, known as portulanos, are those corresponding to the Mediterranean Sea, developed by Majorcan cartographers during the fourteenth century.

Thus, the construction of the imago mundi, which will be reinforced during the next two centuries, when Portugal and Spain launched numerous explorations beyond the “Pillars of Hercules”, and became embroiled in the Dark Sea, the unknown Atlantic ocean. The image will be created thanks to the descriptions of the newly discovered lands and travel relations. One might argue that this image of the world was built in just 40 years, from the discovery of the Cape of Good Hope by Bartolomé Díaz in 1487, and the return of Juan Sebastián Elcano to the Peninsula in 1522, after the expedition commanded by Fernando de Magallanes around the world. We must reinforce the idea that these findings were not a coincidence. They are directly related to the improvement of navigation tools and techniques, but above all, it must be linked with the development of trade. The discovery of the New World and the dominance of the sea routes which would be the basis of political and economic expansion of the states and changed the political-economic balance in Europe.

For the particular case of New Spain, coast bathed by the Pacific Ocean, the situation was somewhat different: since the early years of its discovery there was a great interest from sailors and cartographers to know and incorporate the newly occupied territories in the maps. To the Europeans it was a definite geographical interest of which they tried to learn even more if it were necessary and resort to myths and legends. 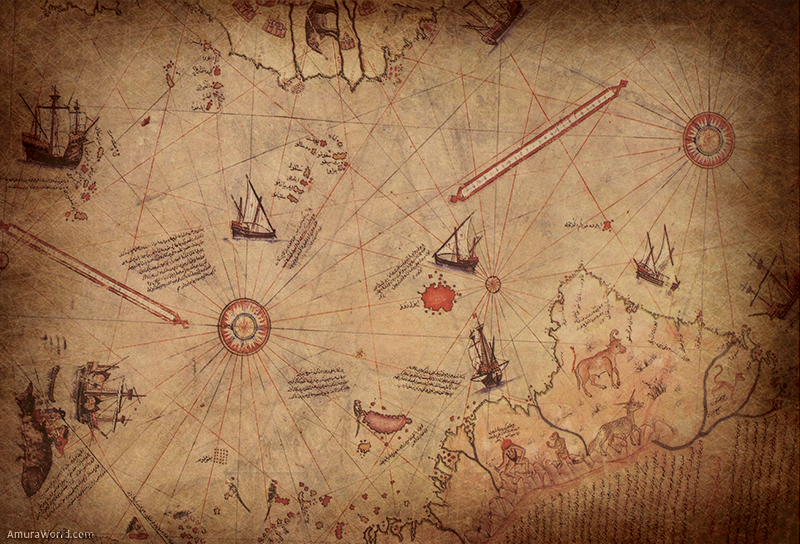 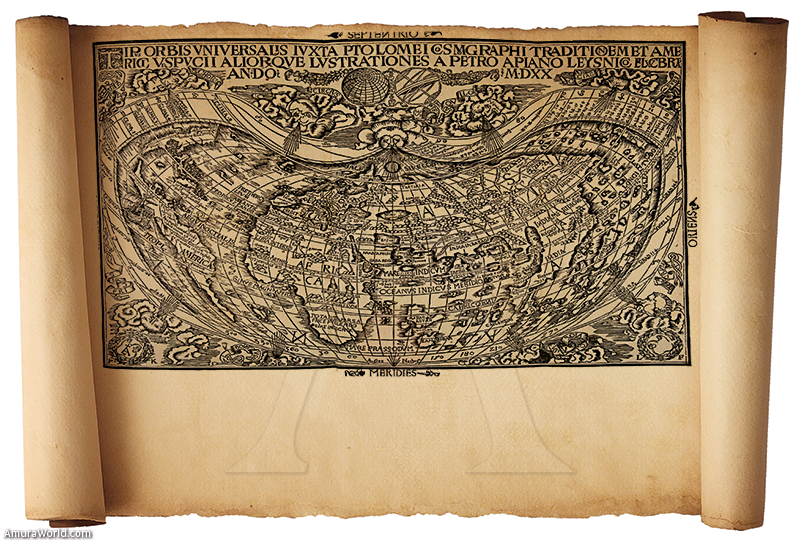 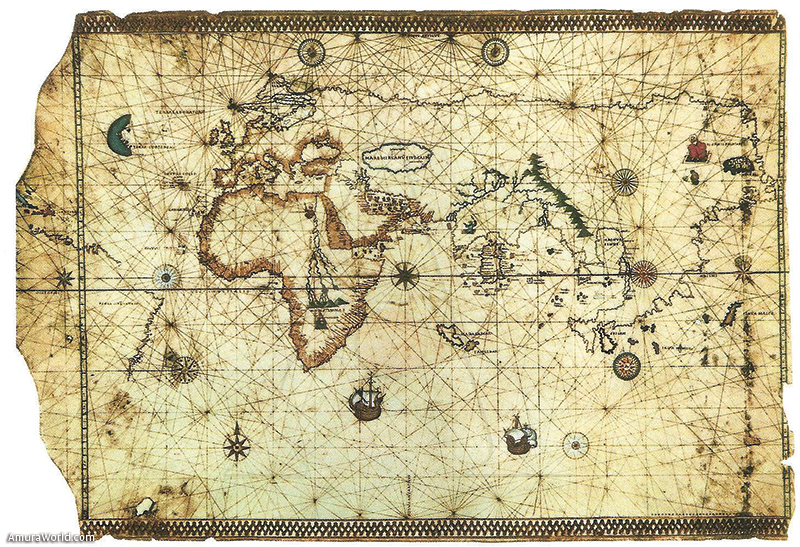 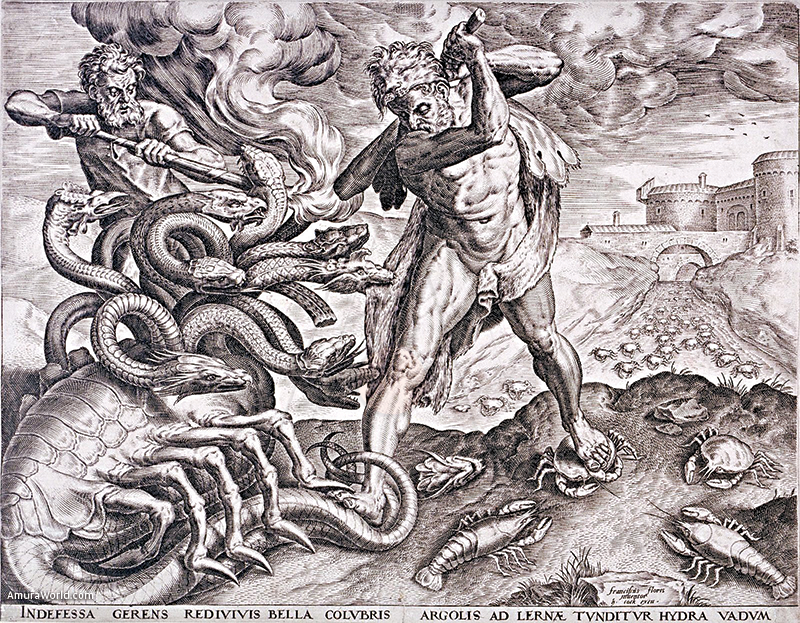 For example, when Gonzalo de Sandoval occupied Cihuatlán Province, someone informed him of the existence of an island “populated all women... rich in pearls and gold”. This information coincided with what was read a famous book of chivalry of the period, “The Esplandian sergas of Garcí Ordóñez de Montalvo”, published in Salamanca in 1510:

“Learn that at the skilful right hand of the Indies, was an island called California... which was inhabited by black women, without any man among them, almost like the Amazons was their way of living... the island itself had the strongest of rocks and rough mountains in the world existed, their weapons were all gold... on the island there was no other metal…”

The book and information given to Gonzalo de Sandoval, surely had to wake up the interest of other conquerors to seek this mythical island. But at the same time there is another great geographical interest: the search of the Anian Passage, which would connect the North Sea (the Atlantic) to the South Sea (Pacific). This led Hernán Cortés in part of his efforts.

A second point of great importance is the participation of Sebastián Vizcaíno in the Spanish expansion into the Pacific Ocean. In 1599, King Felipe II issued a Royal Decree approving the exploration of the coast of California with the specific aim of raising geographical charts of that particular area. As the expedition General Sebastián Vizcaíno named for its expertise in navigation and his knowledge of those coasts.

While the origin of their participation is purely commercial. Pearl bearing reservoir exploitation and the search for gold and silver on the peninsula of California, will develop an active role for the exploration of those territories. Worth remembering that with this issue appear in geography Californian bays names like St. Barnabas, San Diego, Monterey -which suggests as a possible port for ships returning from Manila, Pinos and San Francisco, the canal of Santa Barbara and Carmel river, which continue today.

Despite this effort, the Northern Territories were neglected and only the work of the Society of Jesus allowed a slow and meager occupation. Given the news from Europe that the Russians were being established in the North Pacific coast, in January 1768 a royal order was issued to explore and occupy the Alta California. The force was organized under the command of Gaspar de Portola, and it involved a series of written characters who left their experiences and, in fact, all the papers have been published at different times. Such is the case of newspapers Gaspar de Portola, Fernando de Moncada, Pedro Fages, Fray Junipero Serra, Fray Francisco Palou, Vicente Vila, Juan Perez and Miguel Constanzó. 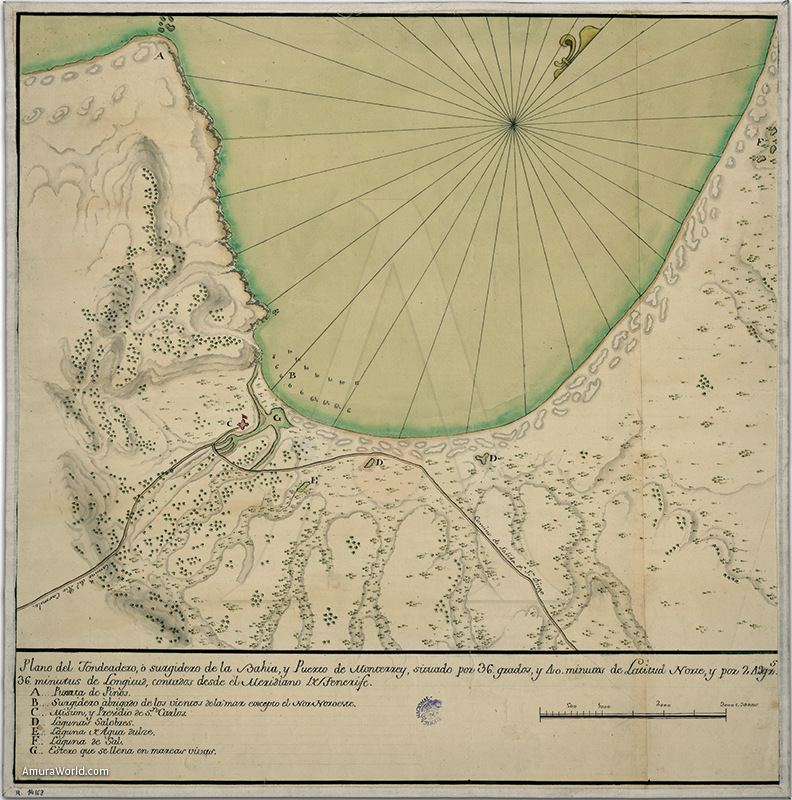 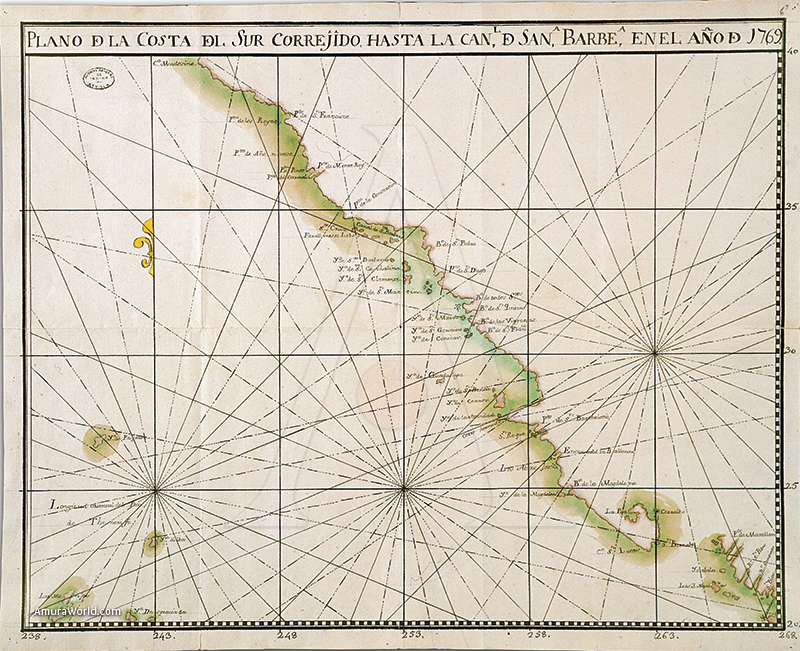 The expedition consisted of two parts, one by sea, which would have two brigs or steamers, the “San Carlos” and “Prince”, and another by land that would start in the missions of northern California peninsula. Of the participants, highlight the figure of the military engineer Michael Constanzó, since it gave us important material on California geography. First two newspapers include on this trip. The first one, dated in the “Port and Real de San Diego” on February 7, 1770 is partial, in that it is Constanzó personal diary that refers to the overland journey in search of the port of Monterey, conducted between on July 14, 1769 and January 24, 1770. While expectations were not met the same in this first attempt, since they found the famous harbor described 150 years ago by Sebastián Vizcaíno, if they reach San Francisco Bay. The second day, but definitely fuller, is the Historical Journal of the Air and Sea Viages in Northern California, dated in Mexico City on October 24, 1770. This diary could be considered the official chronicle of the trip, since it narrates the causes that led to the expedition, preparations followed in San Blas, on the peninsula and then in San Diego, the events that occurred at the expedition to the founding of the mission of San Carlos de Monterrey is the subsequent return to San Blas.

But undoubtedly, the most important of all maps made by Constanzo was reduced Charter...  Asian Ocean, which carries the date, October 30, 1770, with just two days’ difference from the Journal of Land, should accompany him. En broadly covering letter of 20°, from Cape Corrientes, until a little of parallel 42 º, at the mouth of the river of Kings and Cape Blanco. Regarding the length ranges from 242 to 268 meridian, with the meridian point of origin of Tenerife in the Canary Islands. Almost all of the place names listed on the letter is referring to topography of the coastline, except for some missions of Lower California.

So, are the mouths of the major rivers of the northwest, some ports, capes, bays, and points, both the Gulf of California to the Pacific Ocean and a large group of islands, reaching the 137 names.

Finally, a brief information on the sailing conditions faced: The packet boat San Carlos sailed from La Paz towards San Diego on January 15, 1769, with such bad luck that he found and calm winds that led to more than 200 leagues away the coast, arriving at San Diego on April 29, 110 days later, suffering from scurvy most of the crew and the troops. El San Antonio sailed a month later, on February 15, finding better conditions, so only took 59 days on their journey, arriving at San Diego on April 11, but the crew also suffered from scurvy. There was a third ship as part of the expedition, the San Jose, which began its journey at a later date prior to the ships, and that the expedition should reach in Monterrey. Unfortunately, this ship had wrecked and was never again heard from her.

1 Other myths also led expeditions like the “seven cities of gold”, the “fountain of youth” and, in the case of South America, the pursuit of “El Dorado”. 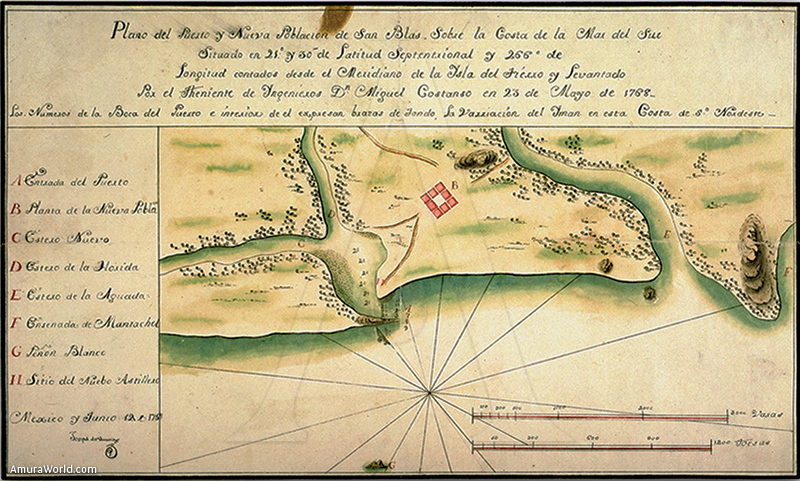 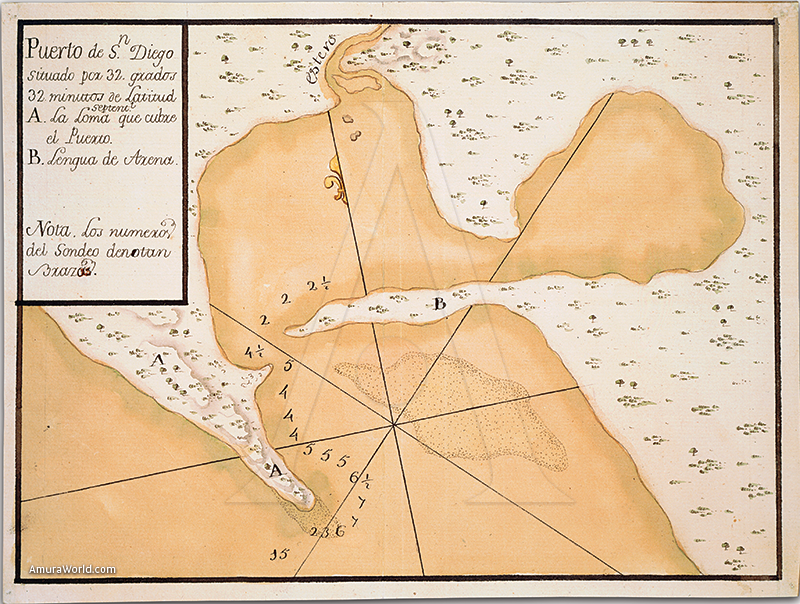 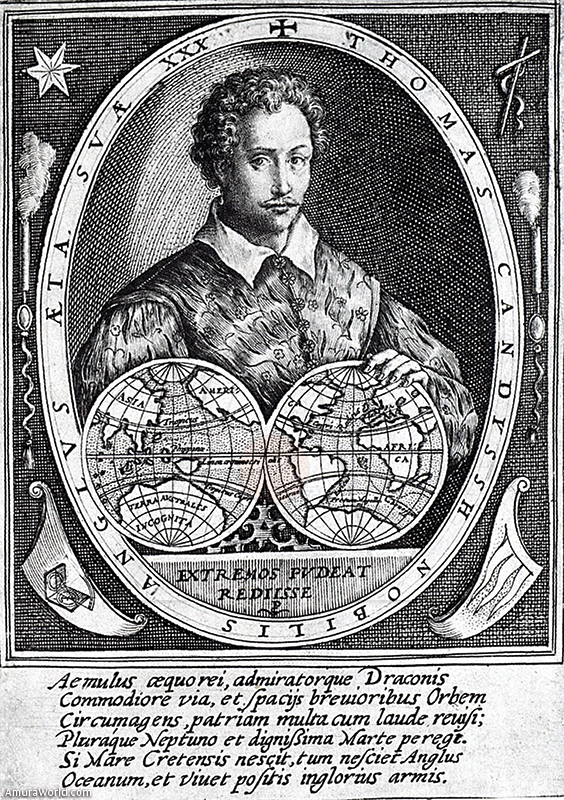