Jewel from the Past Preserved by Time

At the river banks of the Moldavian River there is the most important city of the Czech Republic: Prague. With its history and its special ubication, between east and west, it has developed a unique character: mix of cultures and traditions which bring a special harmony to it and a landscape difficult t o find in another city of the world

Prague and its secret corners

The origin of the city of Prague goes back to the upper Paleolithic, although its first urban settlement took place in the Xth century. It was then when the slaves built two fortifications upon two opposing hills, with the purpose of controlling the passing through the Moldavian. Its location soon turned it into an important commercial exchange center. 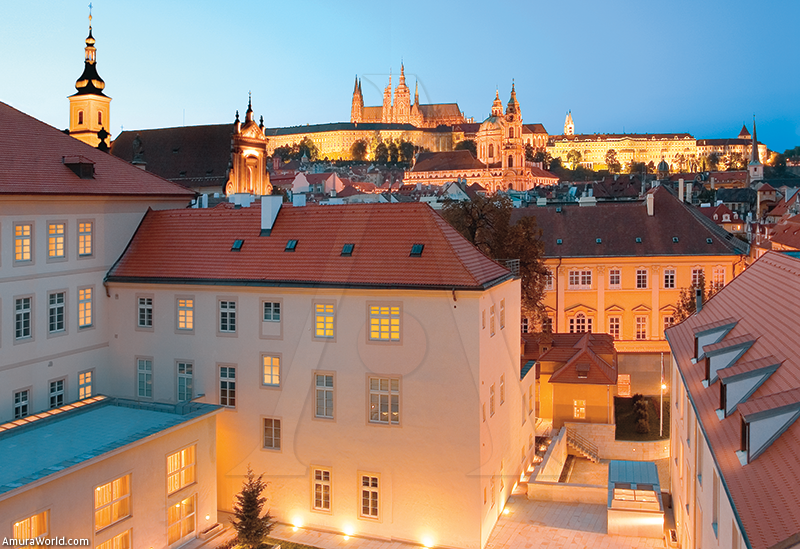 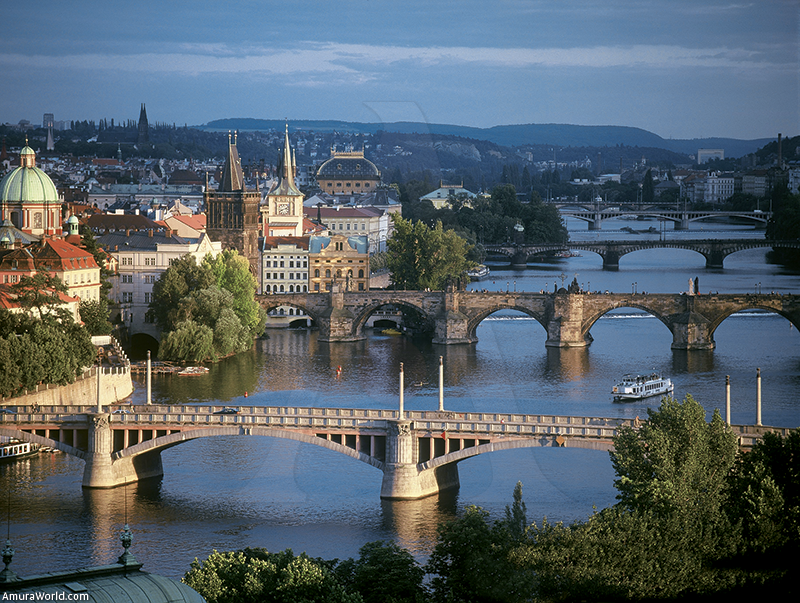 Its development started since the XIth century, when the nucleus of the city of Prague was rising: the Ancient City. The settlements of the German merchants, the Hebrew city, the Malá Strana (Small Part), the City of Saint Gaul and the first wall, built under the orders of the king Wenceslaus the Ist, they are among the first buildings which create the city.

In this time Prague was chosen as the residence of the Bohemian kings, and in the XIVth century it was the seat of the court of the Sacred Roman Empire, under the domain of Charles IV. It was during this period that, by Royal Orders, the slave architect Peter Parler carried out the construction of the Charles Bridge, one of the city’s main attractions.

At the end of the XIVth century, Prague was already a four urban nuclei metropolis and two castles, populated by 50 thousand people from   different origins. In the next centuries –under the Habsburg Empire- the city experimented an important development as a cultural, political and religious center.

During the Nazism, the city lost a fundamental part of its population: the Hebrew community (decisive for its identity). Later on, the German community would also disappear. Today, the city continues its evolution with a definitively Czech character; however, the language and culture mix can be admired in each one of its streets.

After that in January 1st of 1993 the division of the Czech Federative Republic in two independent states: Slovakia and Czech Republic, this nation represents today a modern country, with a rich cultural and historic legacy ideal to visit.

The Ancient City has been since the IXth century the landscape of the international exchanges. In the Square of the Ancient City, there is the astronomical clock of the City Hall, one of the city jewels. There is also the Church of Sv. Jakub one of the most significant gothic buildings: the Temple of Tyn. One of the main attractions of this area is the house where Franz Kafka lived for many years.

The Charles Bridge communicates the Ancient City with the Malá Strana Quarter, a small region which extends at the feet of the Prague Castle. The Quarter was practically destroyed in 1541 and had to be rebuilt almost entirely. There are a lot of palaces and historic buildings in its surroundings. 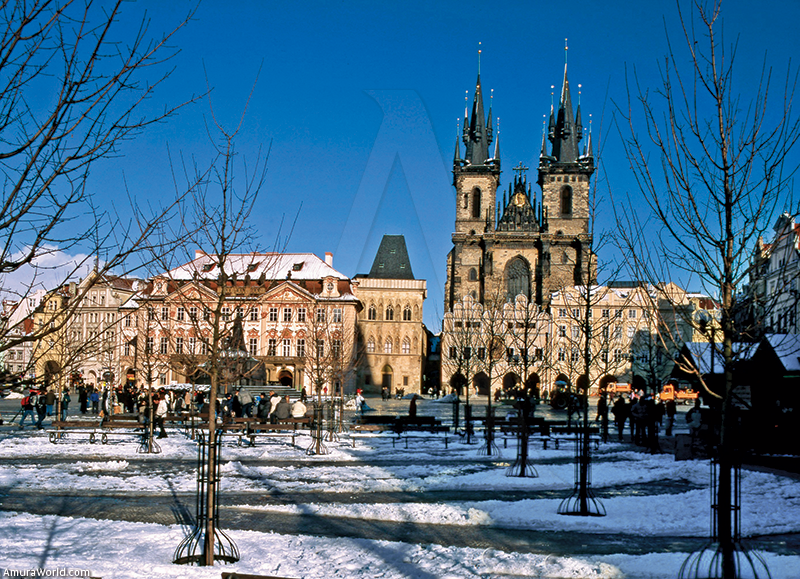 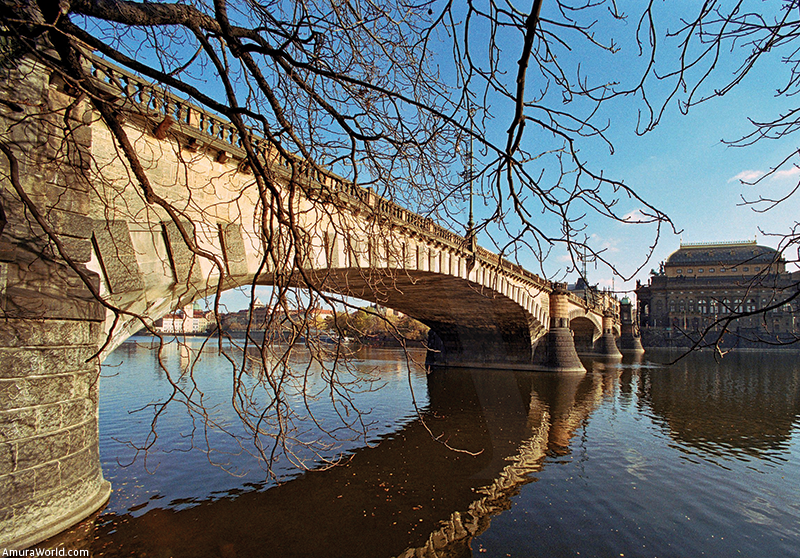 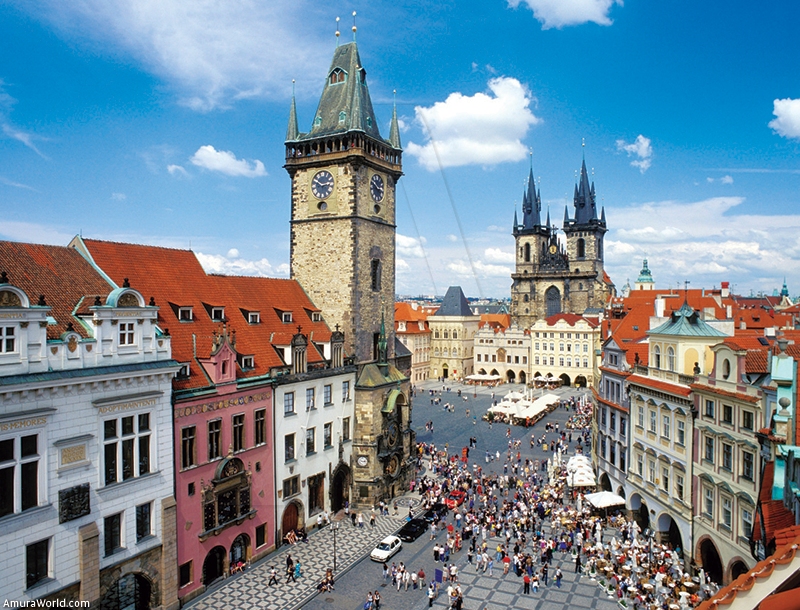 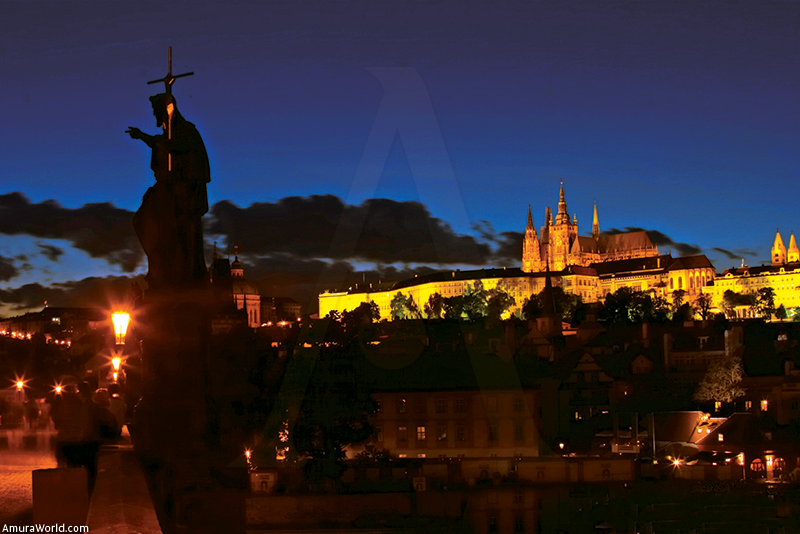 Founded by Charles IVth, the New City houses numerous convents, monasteries, churches and squares being the largest, Wenceslaus Square. There has been multiple celebrations and activities in the open air in this place.

Near the Ancient City there is the Vysehrad Quarter, which during the XIth and XIIth centuries, was seat of the Czech princes. The remains of                 the fortress have been preserved until today. The Church of Saint Peter and Saint Paul is located here, one of the most famous of Prague. The old monuments in the surroundings contrast with three cubist buildings built between the years 1911 and 1913.

The Jewish Quarter (Josefov) is another famous area of the city. Although a large part of its original aspect has been lost, this region still preserves its mysterious and legendary character. There are many histories and legends in which there has been captured the originality of the old community. 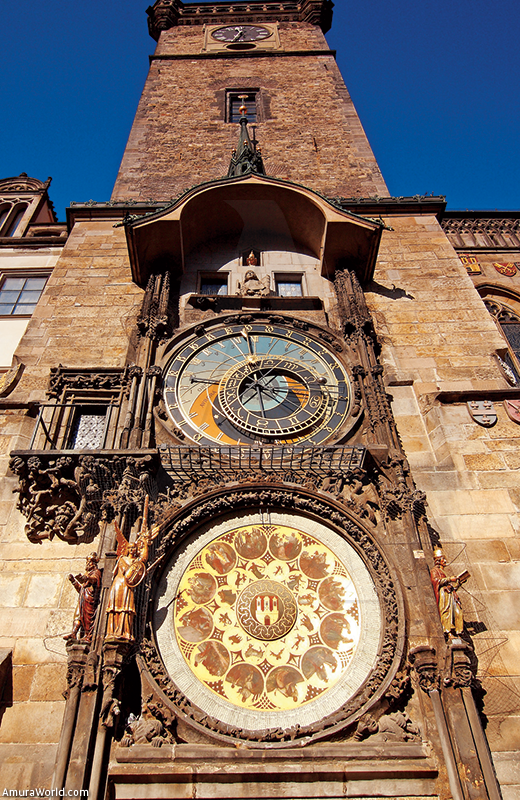 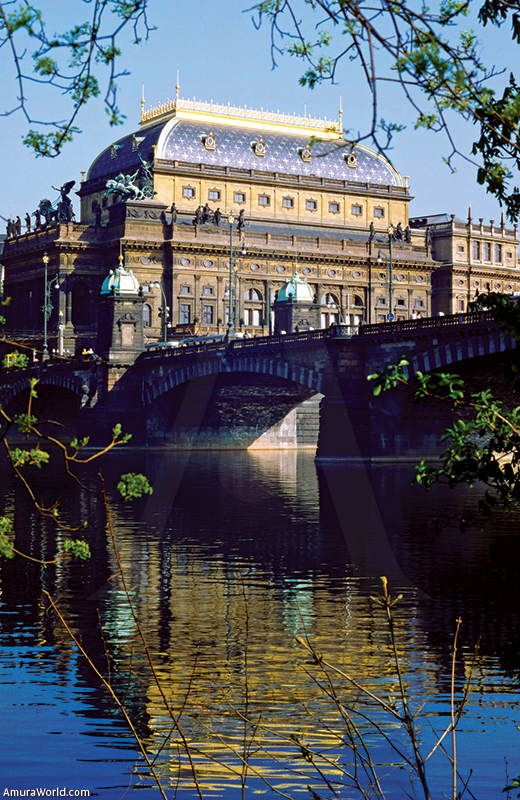 The monument for excellence of the Jewish Quarter is the Ancient New Synagogue, the most ancient of all of those which have been preserved in Europe (around 1270), and one of the oldest gothic constructions in Prague.

The Jewish cemetery in this quarter is an obliged visit. In this place it is possible to appreciate the mysterious sensibility and spirituality of the old community. The most visited tombstone is without a doubt where the most significant personality of the Jewish community Prague rests: the rabbi Jehuda Low Ben Bezalel (1525-1609), better known as the legendary creator of the Golem. The legend tells that this supernatural being          was created by the rabbi Low, by esoteric knowledge, to protect the community from anti-Semitic attacks.

The town of Karlovy Vary is located upon the two slopes of a valley of the Teplá River, in the west area of the Bohemian region, at the feet Metallic Mountains.

Located in a natural shocking place, the spa, internationally known for its German name, Karlsbad (Charles Spas), offers 12 thermal springs and one of cold water, as well as sources of natural gas. According to historic sources, it was the emperor Charles IVth who discovered the first thermal spring, around the year 1350. 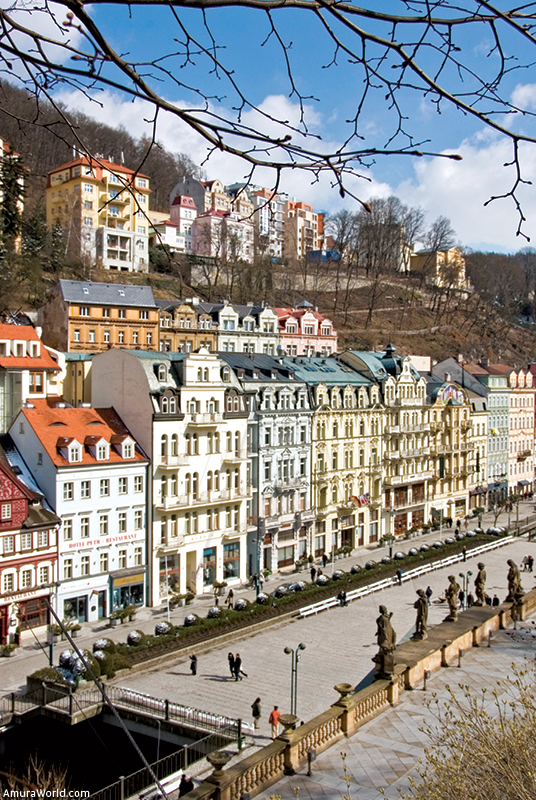 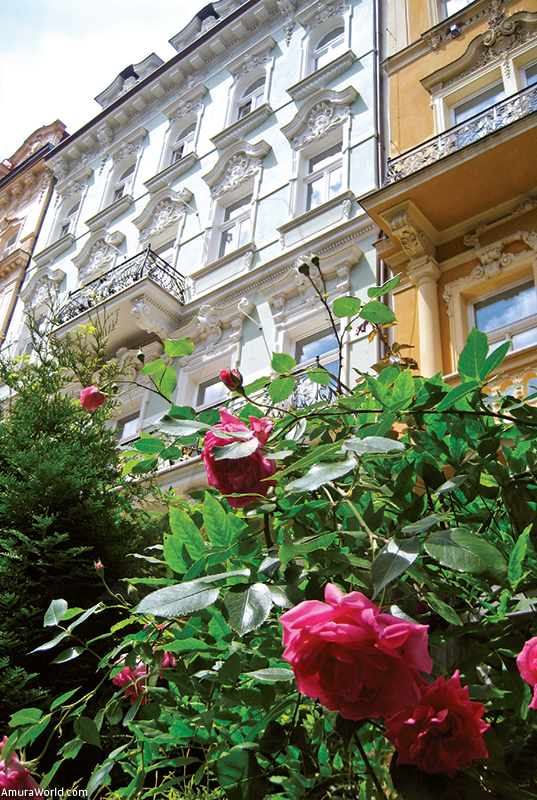 The city’s history has been related to the Aristocracy of the Golden Epoch since its beginnings, and between the XIXth and XXth centuries, it has become one of the largest spas worldwide. The best German, Russian Central European statesmen, thinkers, compositors and artists from all over the world have been there, and it still is today the principal center of the European socialite.

The Karlovy Vary Spa has a total of 80 sources, from which at least 15 of them are free and open to the public in general, where 6 millions of liters of water with a high mineral content spring out each day, at a temperature between 30° and 73°C. All this sources come from an underground spring.

At the river banks of the Teplá River

The center of Karlovy Vary, at the river banks of the Teplá River, is almost completely closed to the traffic. In this area the life of the city is concentrated around the Mlynská Kolonáda, the Mill column, a Corinthian colonnade of the XIXth century, and to Trziste, the Market Square.

At 495 meters of altitude is the Petrova Vysina, one of the best places to admire the city views. One of the most beautiful areas of the city is Sadová, the street of the park, with a set of priest houses installed in old buildings, and the Church of Sv. Petr a Pavel (Church of the Saints Peter and Paul), from the end of the XIXth century.

In this area we can also find one of the few modern buildings of Karlovy Vary, the Bristol sanatorium, built upon an old synagogue that was burned by the Nazis in 1939.

The church of Saint Mary Magdalein, built between 1731 and 1737 by Kilian Ignaz Dientzenhofer, these location was planned upon a blue print defined by the intersection of two ellipses, it’s an interesting example of the Czech inventive. Nearby is the Monument of Charles IV realized by Josef Max en 1858.

In the streets of Stará Louka and Nová Louka, at both river Banks of the river, you can find the typical products of the city: The famous local factories of crystal of Boehm (of the Moser brand) or its production of porcelain in Dvory and Stará Role. 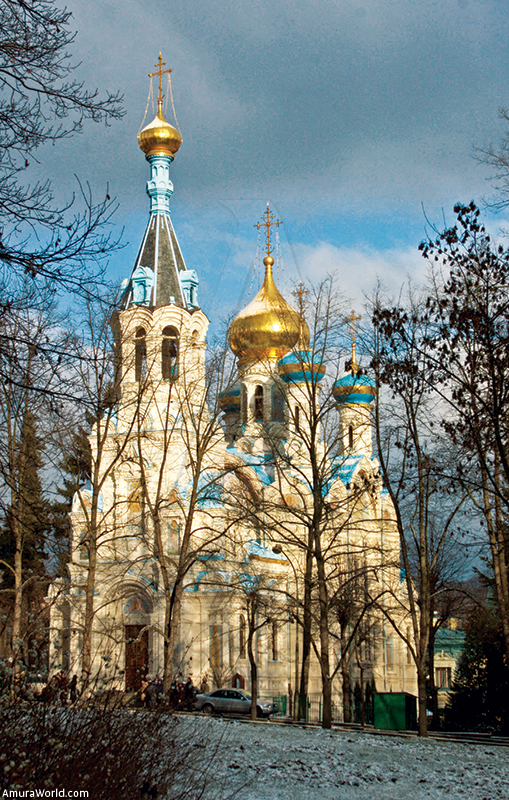 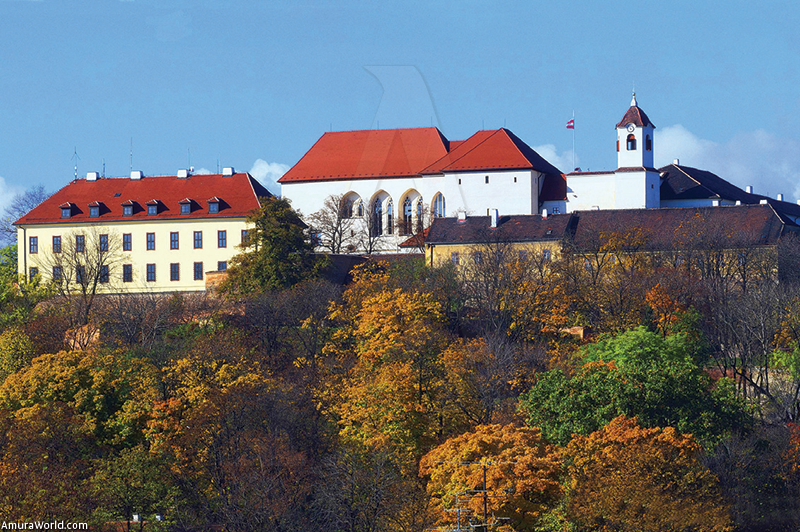 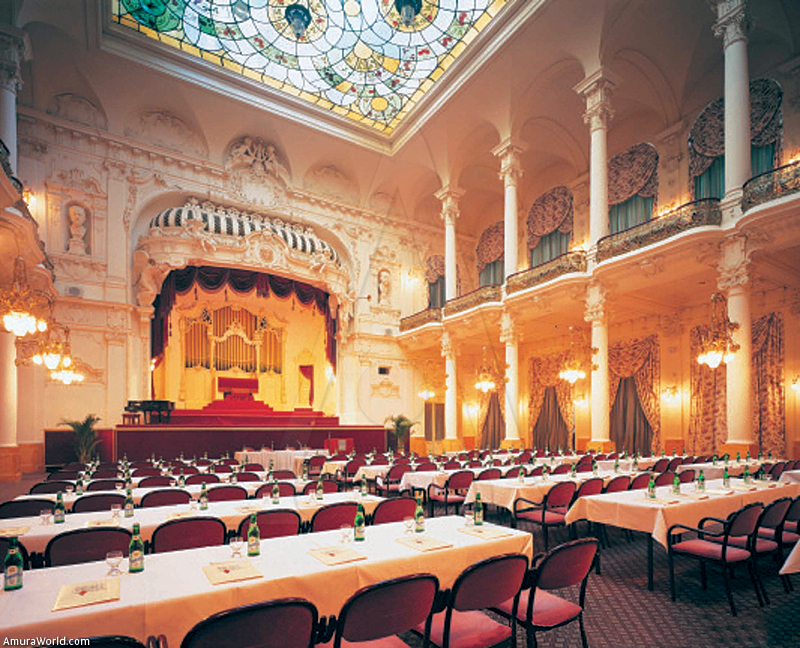 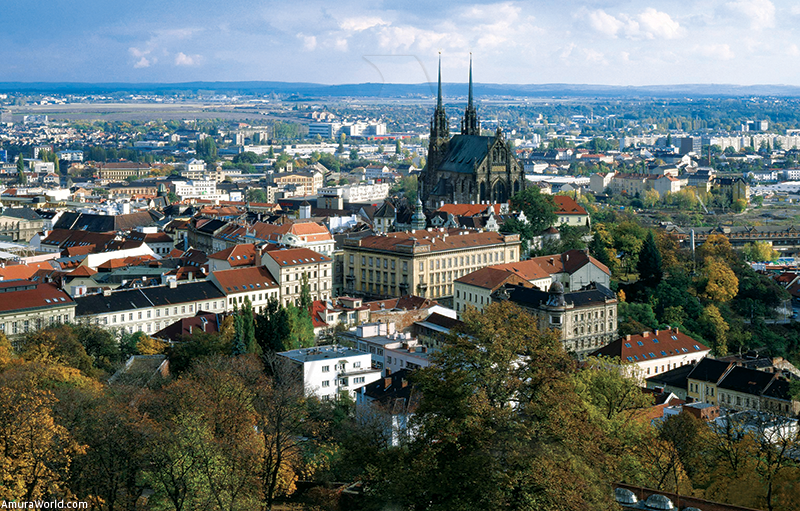 It is also possible to buy the drink with which, for almost two centuries, this city has been identified: the liquor Karlovarská Becherovka, as well as its well known mineral water Mattoni and it traditional candies, the Lazenské Oplatky cornets.

In Nová Louka is a minor head quarter of the Karlovarské Muzeum, and the XIXth Century Theater. It also stands out the Grandhotel Pupp, symbol of the city, built in 1701, with its great halls. From its vicinities a funicular comes out to one of the viewpoints of Karlovy Vary, to 585 meters of altitude.

The sister city of Brno

Although it doesn’t count with the overwhelming number of visitors than its rival, Prague, Brno is the second largest and most important city of the Czech Republic and historic seat of the royal family of Premyslovci. The king Vaclav I delivered the wrights to Brno to be a city in 1243.

Actually the city tries very hard offering multiple entertaining options to its visitors, besides it is an excellent base for the exploration of the beautiful region of Moravia, from which it is capital.

The panorama of the city is marked by the castle of Spilberk, that within its complex it preserves the early gothic style castle with two chapels. Spilberk has turned to into a baroque fortress and later on, in the XIXth century, into a prison called The Jail of the Nations for political prisoners.

In the Petrov hill there is the gothic cathedral of Saint Peter and Saint Paul. The original portal of the city hall of the Ancient City dates from the XVIth century, and it is a jewel from the late gothic.

Among the historic buildings of the city they stand out: the monasteries, the fountain Parnas of baroque naturalist style, the patio of the bishop, Renaissance palaces of the Lords of Lipe and of the Lords of Kunstat, the Saint Jacob Church and the Hauspersky palace, today the theater Husa na Provazku.

Brno is also characterized by many monuments of the modern architecture; for example, the Palace of Klein and the Mahen Theater. Another great attraction, in which modern architecture is concerned, is the Villa Tugendhat, the functional building famous in all Europe and built in 1929, according to the plans of the German architect Miese van der Rohe.

In the Middle Age, the benefits of the Kutna Hora mines contributed with the gleam to the royal Crown of Bohemia. In those days, Kutna Hora turned into the most important and rich city of   the Czech Reign.

At 60 km to the east of Prague, a visit to this small city is like going back in time. To the end of the XIVth century and beginning of the XVth century the Czech king Wenceslaus IV resided here. Among the most significant architectonical monuments of the city there are the gothic church of Saint Jacob (1330) and the cathedral of Saint Barbara, patron saint of the miners (1388). 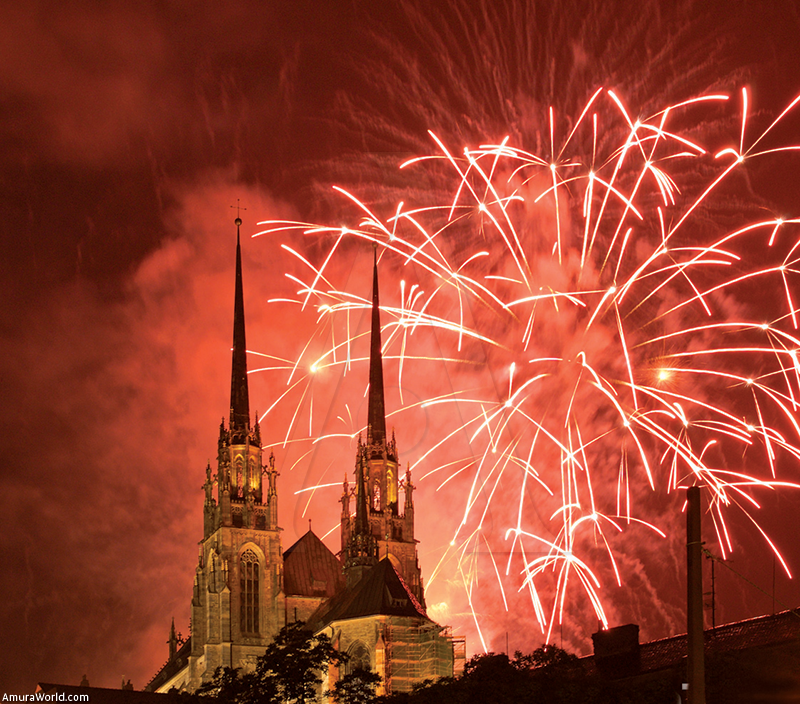 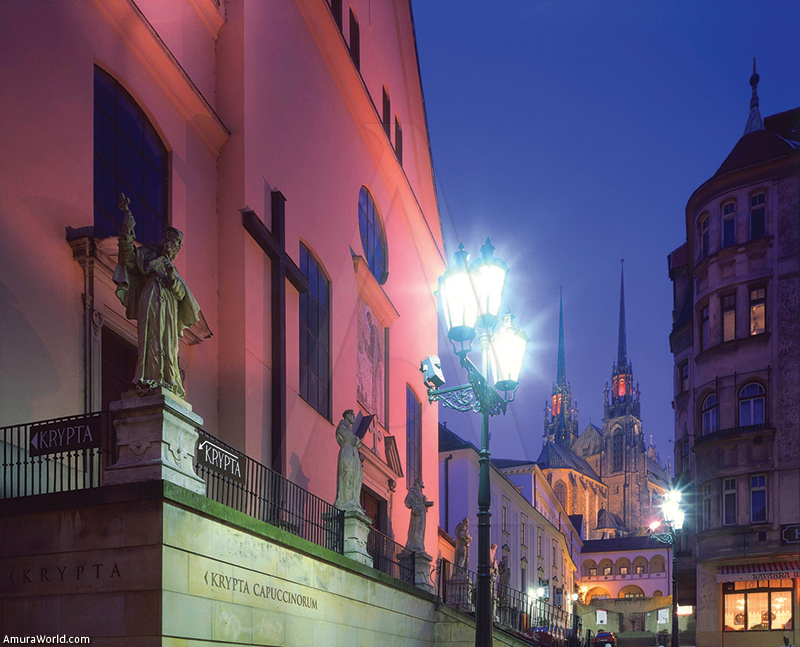 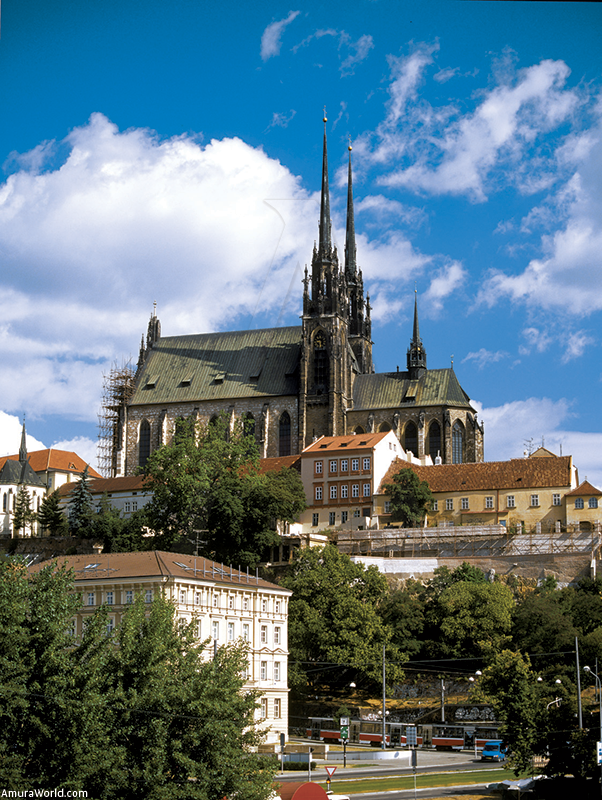 Other interesting buildings in this medieval city are the ancient mint called Italian Court (XIIIth century) and the Hrádek building, which is part of the old municipal fortress and houses the miner museum.  Part of the exhibition consists in visiting one of the medieval mines.

A very peculiar place in the city’s surrounding areas is the monastic church in the Sedlec quarter, with a rare ossuary formed exclusively by human bones. This special and gloomy place holds approximately 40 thousand human skeletons, artistically placed to form the decoration ant the chapel’s furnishing. 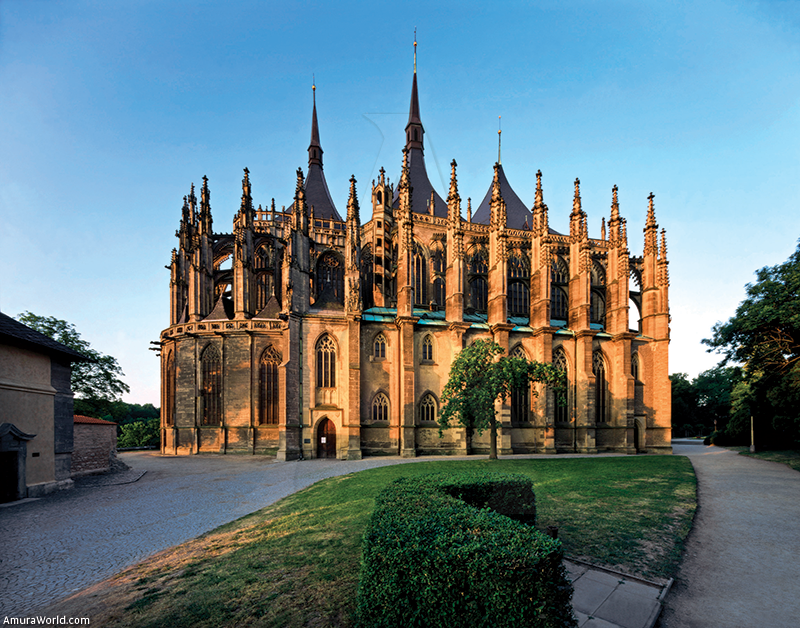 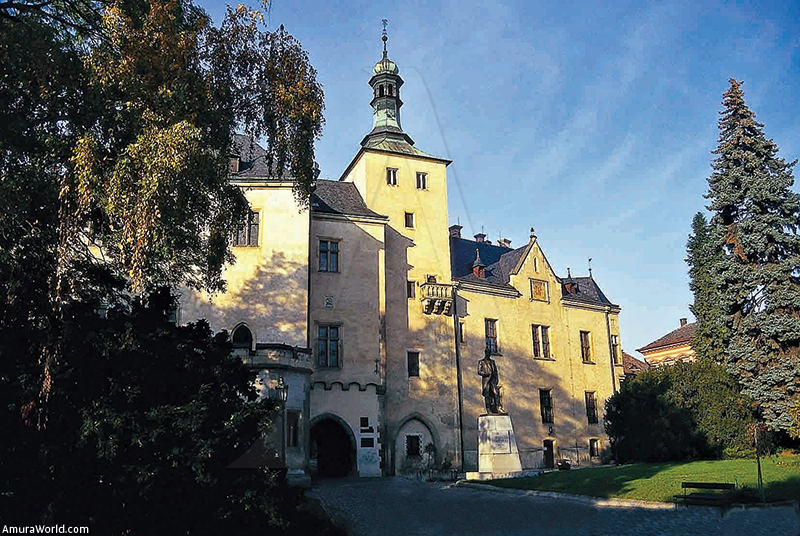 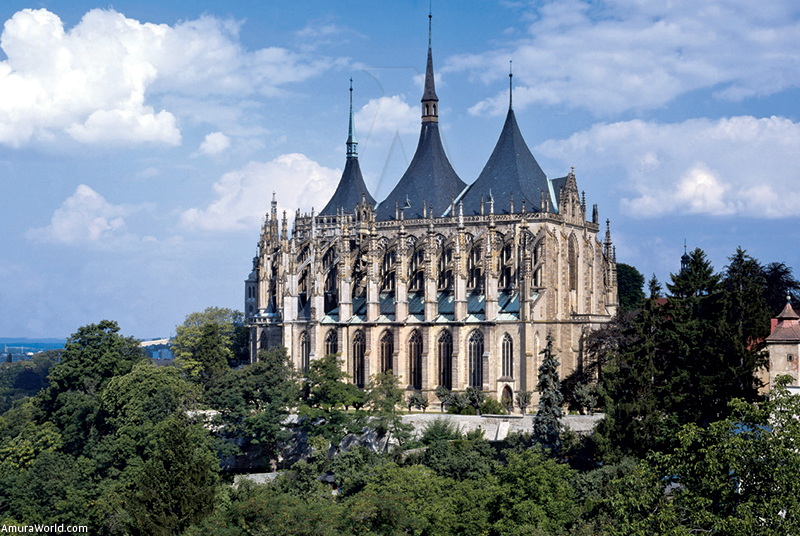