Enclaved in the southern part of Asia, Myanmar is the name used by the locals to describe their home, which is the place named by the British as Burma. Since 1989, the original name is been used to denominate the land, also known as the “Land of Gold” because of its natural wealth and generous climate.

Walking through its streets and its inland landscapes is a difficult experience to describe because it the fabulous spectacular that they are. One of the tours not to be missed in the boat trip through the Ayeyarwadi. The nature, with its more than 5 miles (8 kilometers) of waterways, the history of a millennium civilization that breathes spirituality, temples and pagodas, is just part of the attraction of a country waiting to be discovered by the West. 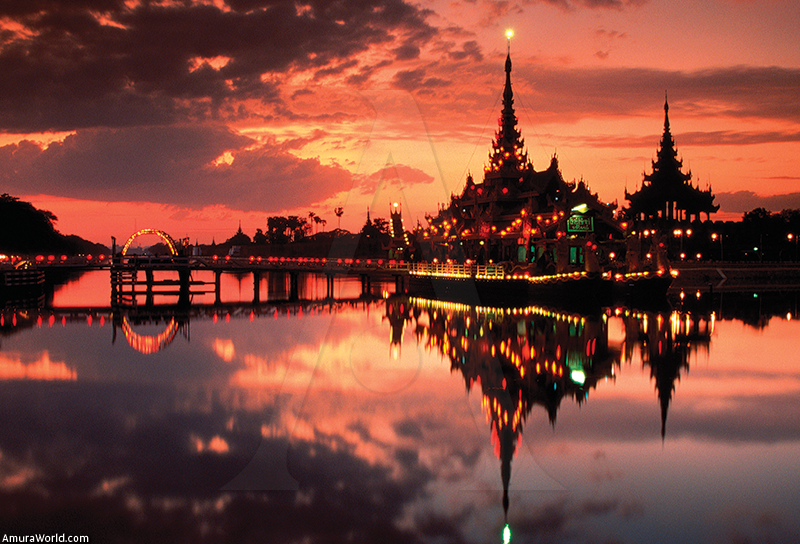 Besides its beautiful pagodas that crown almost every hill in the country Myanmar has another wonderful treasure: its people. One can walk around cities for months trying to find a rough peasant, a thief, an illmannered waiter or a surly official; however, all effort will be in vain. In this Buddhist country, where people lead simple lives, beautiful women are deeply respected and listened to, and in it is not uncommon to see men rocking babies in their cradles in the street.

Nobody knows why this country enamors so many travelers so deeply. Watching the sun go down in Shwedagon (Rangoon), admiring the huge golden dome, perhaps the most special place in Myanmar, climb up the Mount Popa temple or awe at the sunset in a lost temple in Bagân are experiences that leave their mark. No one can explain the powerful spell of its people, its history, its landscapes or its pagodas. Myanmar puts all rationale to one side. 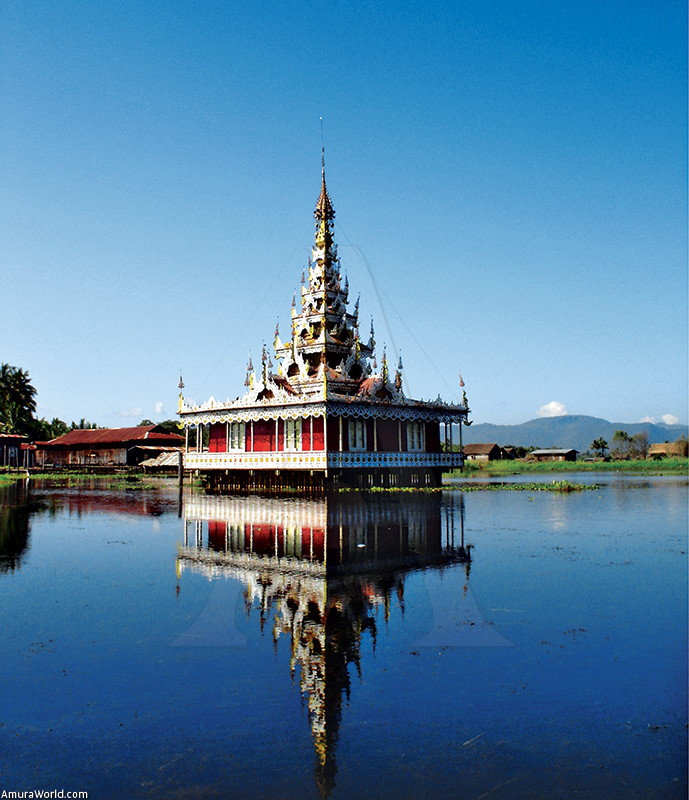 Its particular characteristic is that it is a very safe country, with generous and honest people. This makes getting around much less tense than in other countries where tourism has corrupted the society.

The ordinary people barely speak English, but they try to make themselves understood using the means within their reach. With just four words you learn in Burmese; it is a very easy language to pronounce since it has similar vowel sounds to Spanish, so all doors are opened with incredible ease.

Lake Inle is also unforgettable with its canoes, monasteries and floating houses and surrounding tribes. Mandalay is a good place to buy handicrafts in silver, tapestry and dolls. And you mustn’t miss Amarapura or the U Bein Bridge, the longest teak bridge in the world. 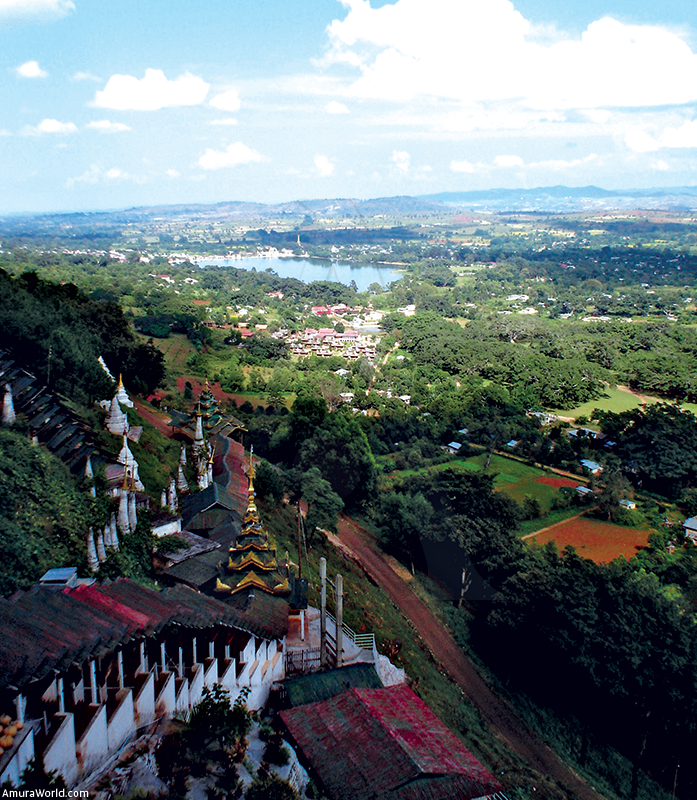 The dirty and rundown buildings of the not so long ago named Rangoon hide one of the incredible marvels that travelers can find during their Asian tour: the great Shwedagon Pagoda. Dominating the entire capital from the hill that rises majestically to a height of 100 meters, it stands out. proud, and surrounded by the 82 buildings that accompany it, its 8,000 gold bars that culminate in a needle inset with 5,000 diamonds. Travelers lucky enough to visit it more than once will do very well to visit at disk when the last rays of sunlight bathe the dome offering amazed spectators an unforgettable spectacle.

More modest. But also worthy of visitors’ attentions, are the Kaba Aye. Chauk Htat Gyi, Sule and Botataung. with its labyrinth of mirrors, which can be followed by a visit to the always lively outdoor market and the Bogyoke Aung San market, before a leisurely stroll through the gardens of Kandawgyi Lake for a splendid dinner in the restaurant over the tranquil waters. 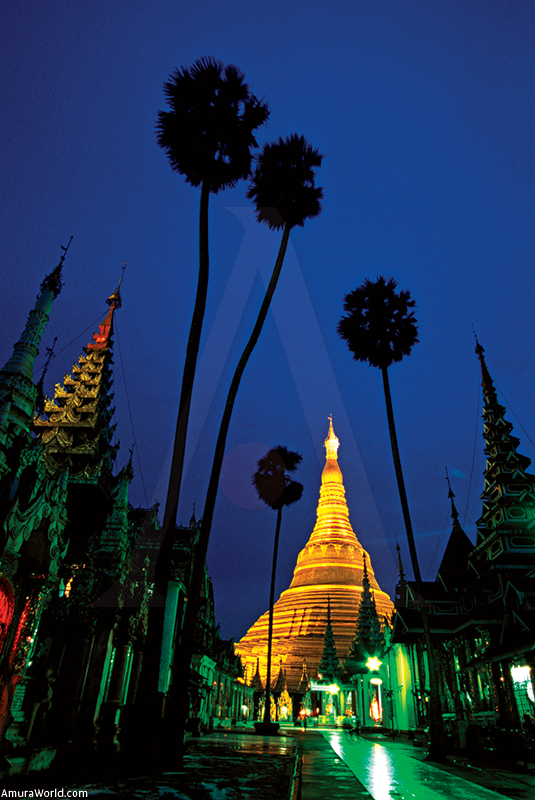 Among the religious monuments of Bago. formerly known as Pegu, there are the Mahazedi and Scwegugale and the sanctuaries of Hinta Gone. Kyaik Pun and Maha Kalyani Sima. However, its greatest glories are to be found in the Shwemawdaw Pagoda or the Great Pagoda of the Golden God. and in the Scwethalyaung. the gigantic image of the reclined Buddha of more than 50 meters in height.

Dusty Mandalay, with its streets constantly filled with trishaws and horse and buffalo drawn carts carrying merchandise from the river to the Zegyo market, proudly displays its Royal Palace and its Kuthodaw. Kyauktawgyi. Mahamuni and Eindawya pagodas. But. possibly what most attracts the attention of visitors to the city is the Shwenandaw Kyaung. the exquisite monastery built entirely from wood, the inside of which can be enjoyed by listening to the readings and the rites of the monks and the faithful who attend daily. 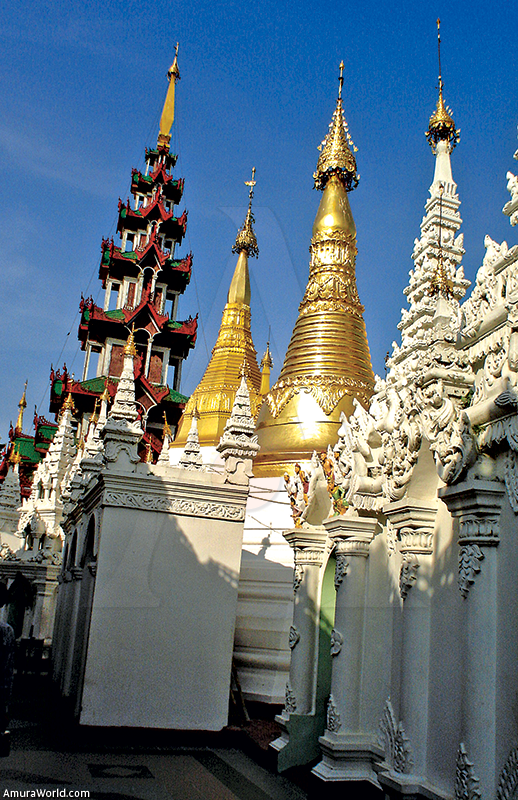 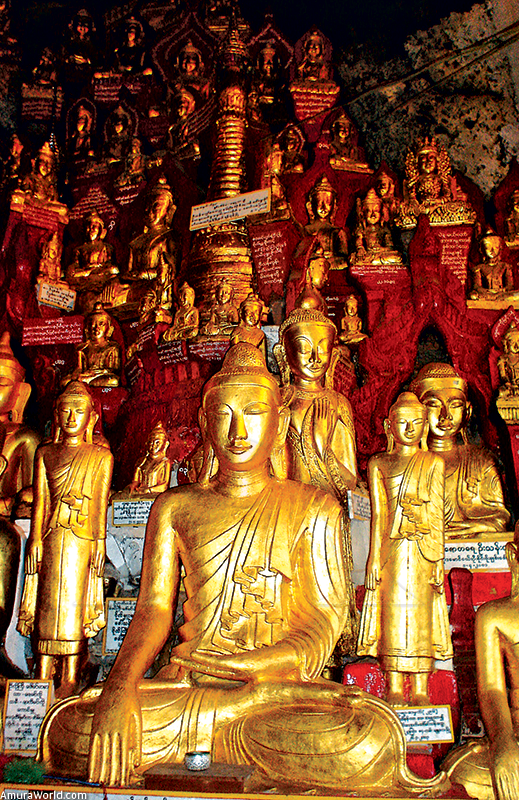 The “deserted cities” of Sagaing. Mingun. Ava. Monywa and Amarapura are located near Mandalay. Amarapura was the capital of the region before Mandalay took the honor away from it. From that era. the Kyauktawgyi Pagoda survives, which can be reached by crossing the appealing U Bien Bridge.

Sagaing sits atop a hill devoured by its countless temple, with the beautiful Kaunghmudaw pagoda hidden behind. From there, all local guides will tell travelers of the curious story that the monument was erected taking the perfect bust of Queen Amarapura as a model. 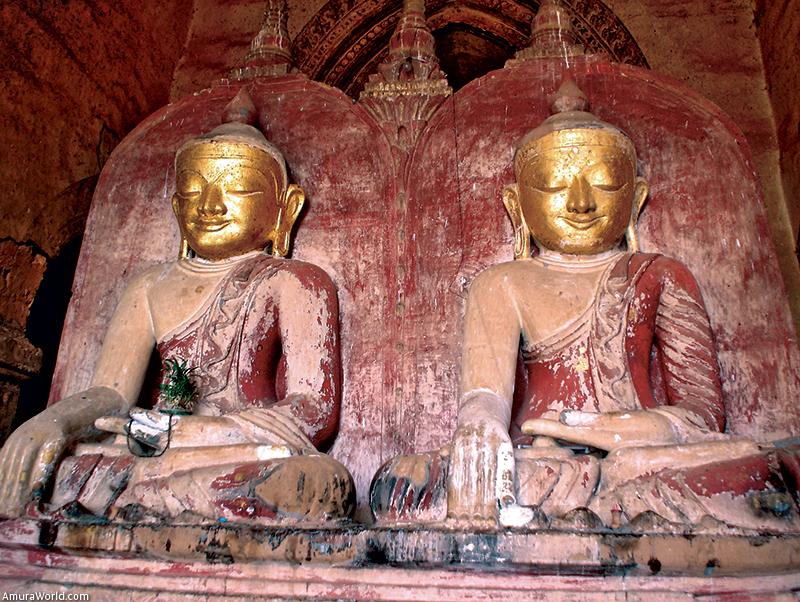 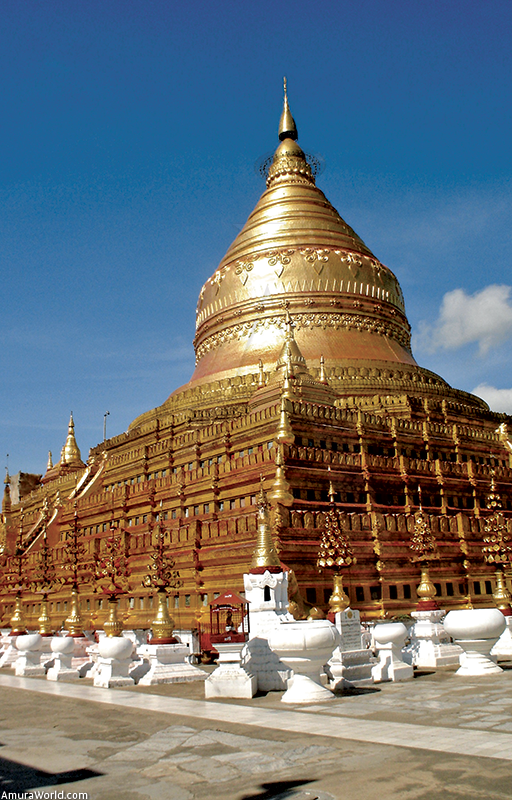 The “deserted city” of Mingun offers travelers the curiosity of the ruins that, if completed, would have been the second tallest pagoda in the world.

Something similar occurred with bell also on show here, which is said to be the second largest in the world and the first that is free of cracks in its structure.

Pyin Oo Lwin is a town set among spectacularly green mountains. The Pyin Oo Lwin Government Rest House can be found here; a hotel that at the beginning of the last century was the residence of the single members of the Bombay Burma Trading Company. Today it entices as the ideal place of rest for couple of days on the way from Mandalay to Bagan to enjoy its 19“1 century and colonial flavor. 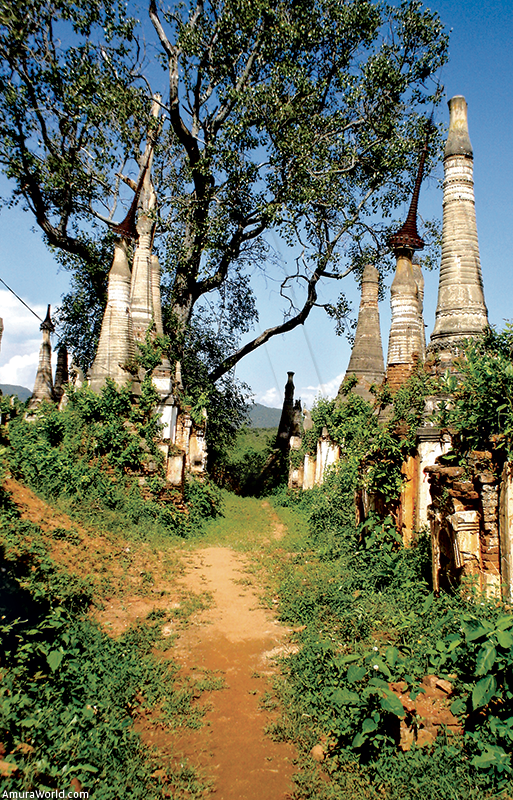 The up to 1989 named Bagan is one of the most surprising wonders of the Asian continent. Riding among its thousands and thousands of buildings in a horse drawn carriage, rented from a local, is an exhausting but fabulous experience. The most awesome moments occur when admiring the white structure of the Ananda temple, the mosaics of Mingalazedi, the terrace of Shwesandaw. the collections of Buddhas of Manuha or the golden beauty of Shwezigonpuntos.

One of the most beautiful places of Myanmar. The floating town of Ywana emerges from its waters, where travelers can tour the markets and pagodas through its canals. The movements of the oars disturb the vegetation hidden in the water, the oarsmotimen standing on their boats rowing with their oars tied to their legs.

An obligatory stop off on the tour of Myanmar are the caves of Pindaya. For centuries, their insides have guarded thousands of images of Buddha, among which, travelers, equipped with lanterns, can savor the strange mystical ambience respired from every corner of these fascinating caves. 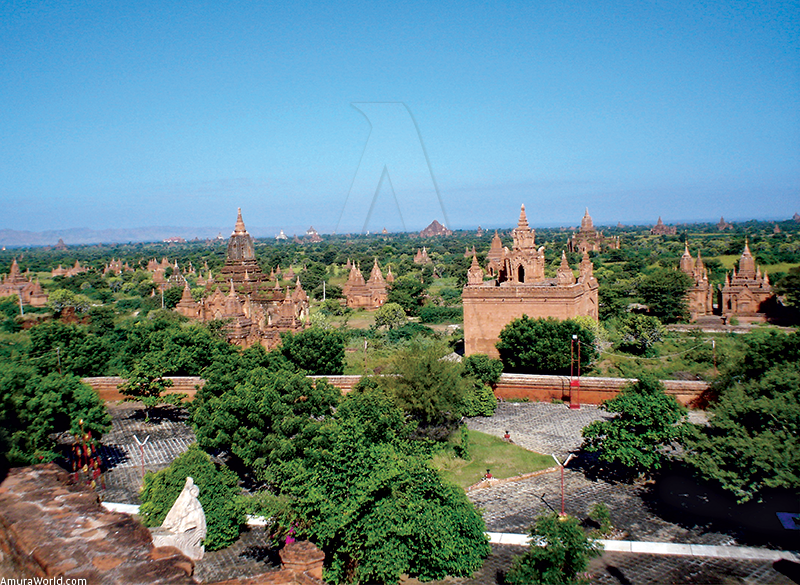 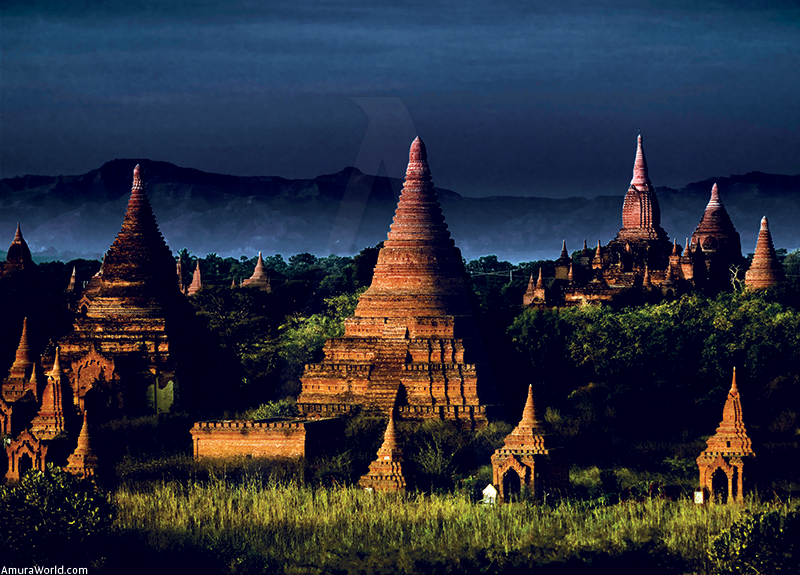 Myanmar, known as the “land of golden pagodas", is one of the largest and most influential Buddhist cultural centers in Asia. Its culture is deep and indivisibly united to its deeprooted religious beliefs.

The fascinating spectacle of the theater of the country, the Pue. is a mix of traditional opera and the ancestral representation of Chinese shadows, music and secular dances.

The artistic production is almost completely of religious origin or profoundly related to Buddhist practices. Although the architecture and sculpture show a clear Hindu influence, the layman art is almost non existent in the country.

New Year is the festival high point in Myanmar, when the Pue theater shows multiply and at times last all night long. Celebrations are held in April, which is the hottest month of the year all over the country. This means that any tank of water or sobre sus embarcaciones y dirigiendo los remos con sus piernas.

Fountain is good to practice the tradition of cooling down with friends and expressing the happiness of those days. 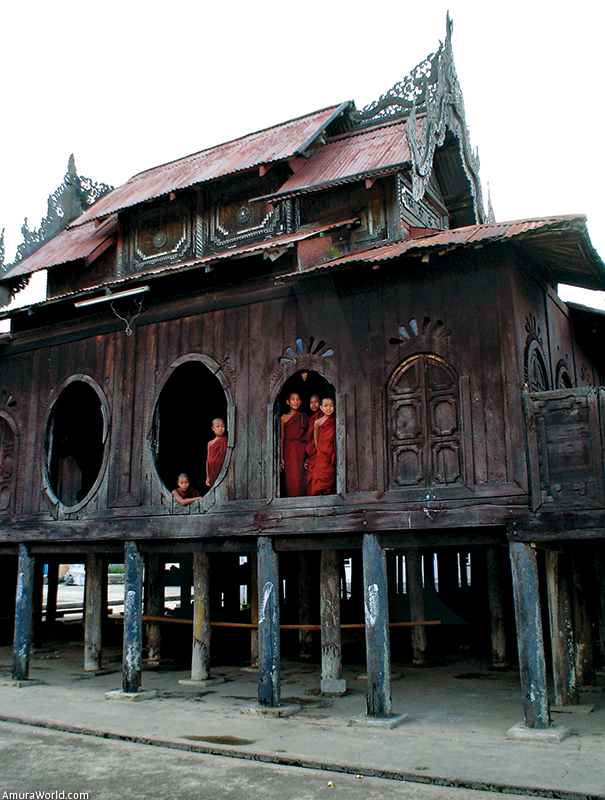 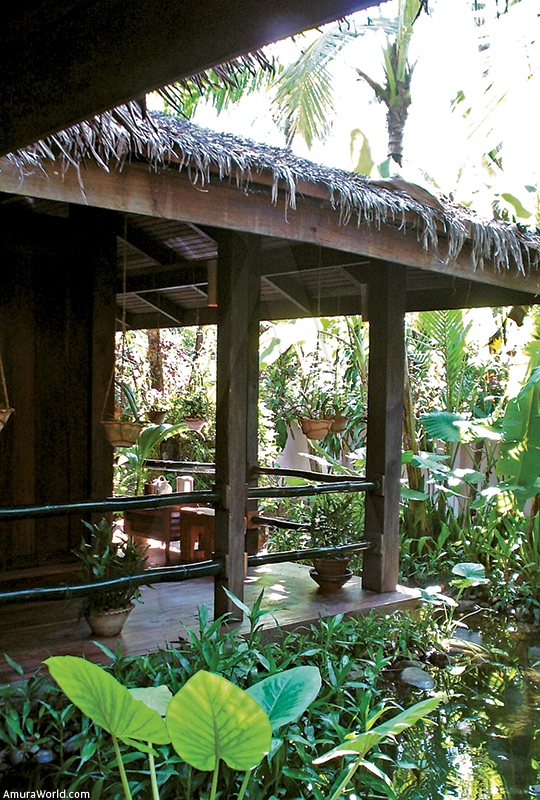 The climate is tropical and the rainy season normally lasts from May through November. Mean temperatures vary from 16°C in the mountainous areas to 38 °C in the warmest areas.

Myanmar normally issues 30 day tourist visas, which cannot be extended and usually cost US$16. A fee of US$10 must be paid on leaving the country.

Nowadays, visitors can arrive in Yangon and freely plan their tours of the country, provided they remain in areas officially designated for open tourism by the Government.

The official currency is the kyat (pronounced “chat”). It has an incomprehensible coinage system that fortunately for the traveler, has fallen into disuse for large payments, although small purchases can be made in local currency (in fact, the kyat has a very favorable exchange rate, which makes everything much cheaper). It is advisable to always change small bills in case of any unforeseen circumstances.

Exchanging travelers' checks is complicated. In terms of credit cards. Visa seems to be gaining a certain level of acceptance in some establishments in the capital. 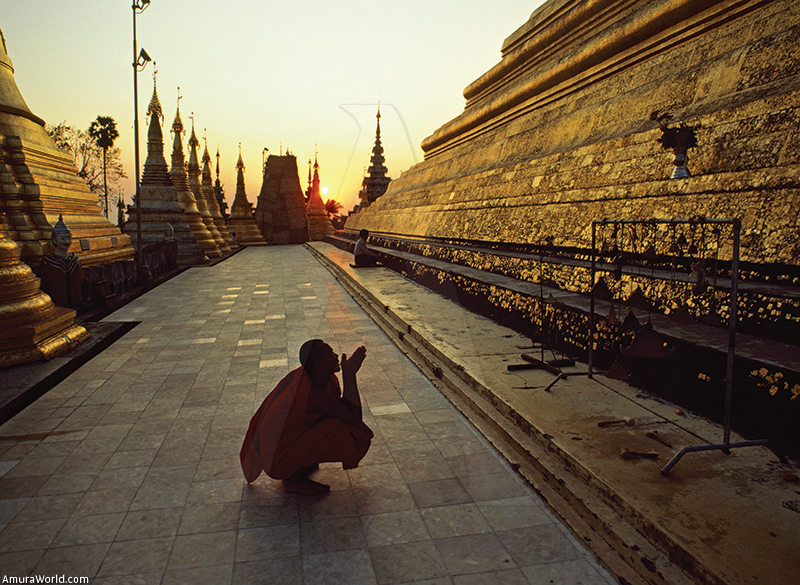 In Myanmar, getting from one place to the other seems complicated and uncomfortable. The aircraft used by Myanmar Airways are usually aged turbo prop Fokkers that seem to be completely unaware of the words punctuality, impatience and exhaustion. However, a private company Air Mandalay starts operating a couple of years ago. which is much saber and more efficient.

Perhaps the most pleasant way to see Myanmar, to feel its pulse, to live its legends and understand its history is to travel along the Ayeyarwady River. The riverbank life offers endless fascination while you enjoy the calm of the river.

The boat journey, descending along the River Ayeryarwady. besides being comfortable and tranquil, offers visitors a good opportunity to see this part of the country. And if you have time, you can continue for another week on to Yangon. A visit to Myanmar would not be complete without a river trip to Irrawaddy, for which there are two main companies: River/S Pandaw and Road of Mandalay.

Curry and rice forms the base of Burmese cuisine, but unlike the rest of South East Asia, the curry is not too spicy and has much more flavor than in neighboring countries. It is easy to find Chinese and Hindu food and of course, crunchy fried grasshoppers, which no traveler, even the fussiest.

must not pass up. not only because of their charm, but also because they are really delicious. Chinese beer is very common throughout the country; however, Birmana, from the Mandalay brewery, is especially recommendable.

Le Plantear is without a doubt the best restaurant in all Myanmar. The owner, a Swiss chef, has managed to create an incredible place that offers Asian haute cuisine. Sitting in the evening it the garden and enjoying a fine dinner under the night sky is an unforgettable experience.

The articles most appreciated by travelers when shopping are lacquered items, horse hair bowls, tapestries, pillow cases, cushions made of tiny mirrors, sequins, silver thread and opium weights that must have, if you want an antique, the stamp on the lower part (although anything can be faked!).

In Bagan. you won’t have to look very far to find delightful iron or ivory antiques, mostly from Buddhist monasteries. However, travelers should bear in mind that customs look most for these articles on leaving the country. 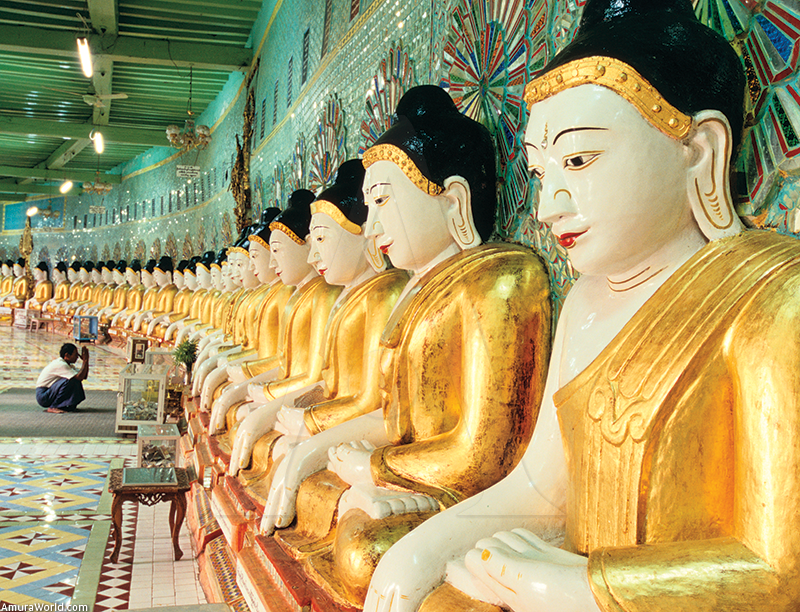